A MODERATE avalanche danger exists in the high Alpine (above 3,000′) and in the periphery of our forecast zone, such as Crow Pass and the far southern end of Turnagain Pass extending to Summit Lake. Although trending to unlikely, a chance may still remain for a person to trigger a large avalanche breaking near the ground in these higher and remote zones.

A LOW avalanche danger exists in the majority of terrain at Turnagain Pass. Watch for lingering wind slabs in very steep terrain, cornice falls along ridgelines and avoid being under glide cracks.

The dark days…. are about to turn the corner. At 7:20pm today, the northern hemisphere will stop tilting away from the sun and back toward it. Happy Solstice everyone!

For this short day out in the mountains, triggering an avalanche at 3,000′ and below is unlikely and trending to unlikely above this. Despite ‘normal caution’, LOW danger avalanche problems stated below, we do have some information on a weak layer of snow sitting near the base of the snowpack in the high Alpine. This layer we are calling the Veteran’s Day Facets and it is sitting on a hard crust. Limited data gives us much uncertainty as to how reactive the layer is throughout the region. It is buried anywhere from 1 – 6+ feet deep due to the extensive wind effect during the early to mid-Dec storm cycles. This presents us with a lingering concern that a person could trigger a larger avalanche at the high elevations above 3,000′. The mostly likely scenario for triggering would be hitting a thin spot in the snowpack or near a rock poking through that initiates failure in the weak layer. Concern is greater where the overall snowpack is shallower- towards the southern end of Turnagain Pass, in Summit Lake and in the Crow Pass terrain just north of Girdwood.

Lingering wind slabs:  For anyone hitting steep chutes, spines or slopes today, watch for lingering older wind slabs that may not be well bonded with the snow underneath. Even a small wind slab can cause problems by knocking a person off their feet in steep rocky terrain.

Cornice falls:  As always, give cornices a wide berth if traveling along ridgelines and limit exposure under them if traveling below.

Loose snow sluffs:  The surface snow is loosening and sluffs in steep terrain were reported yesterday. Watch your sluff on steep slopes. 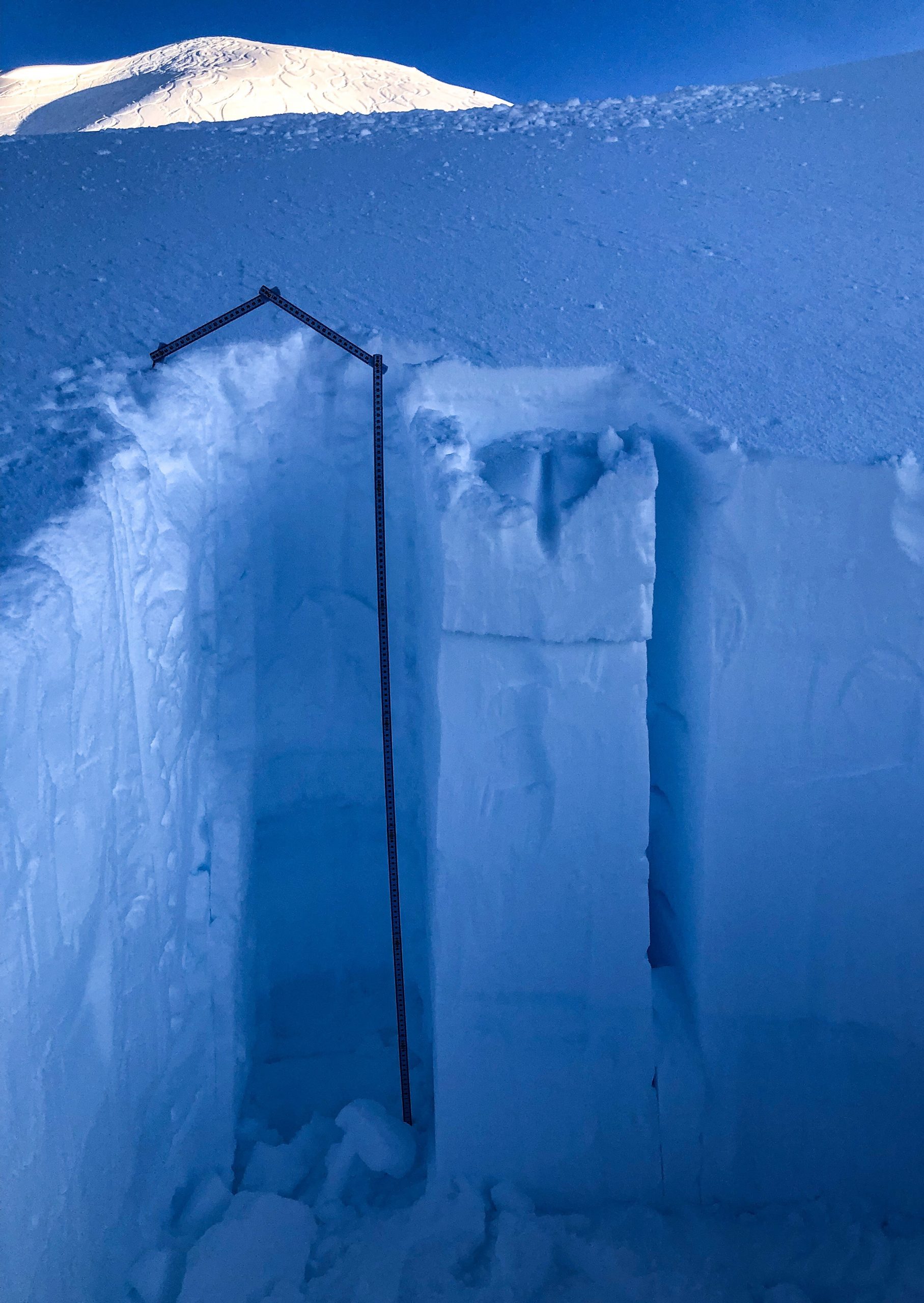 Observer Eric Roberts found yesterday what we have been finding at elevations around 3,000′ and below- a stable snowpack.

Slowly opening glide cracks are become more common in popular areas at Turnagain Pass. Keep an eye out for these and avoid/limit any time spent underneath them. They are a completely unpredictable hazard and can release at anytime. 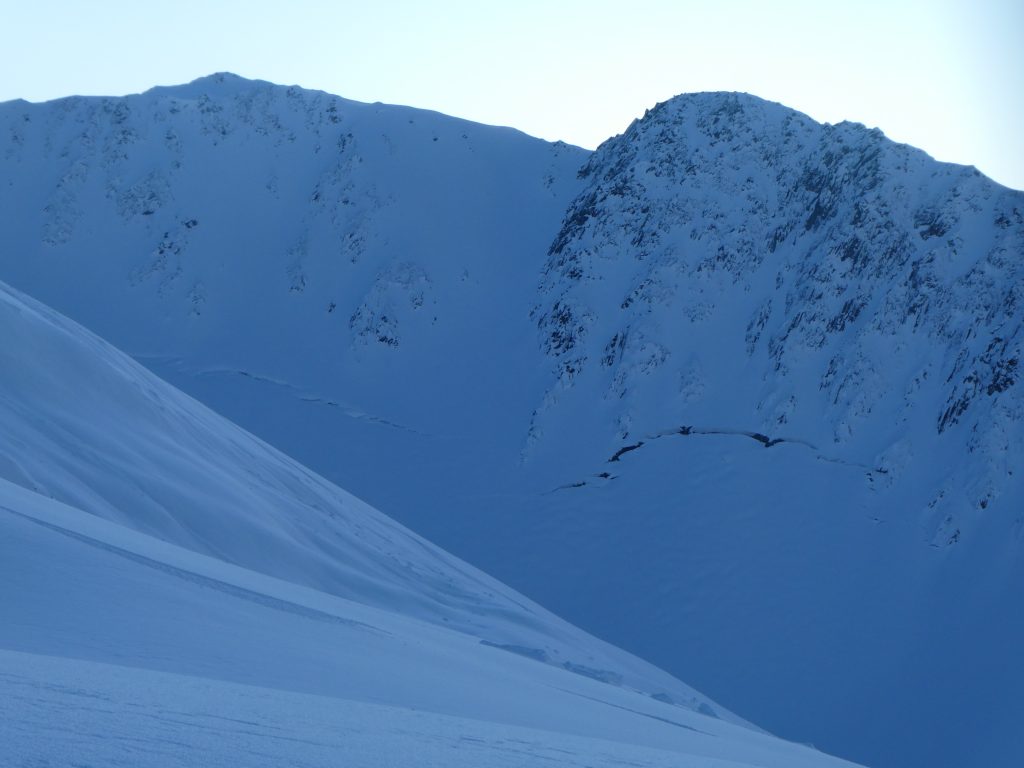 Looking ahead to our next snowfall, a crop of surface hoar and near surface facets are forming on the surface of the snowpack. 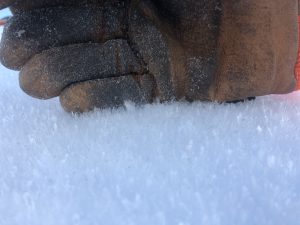 Surface hoar forming from the past two days of cold and clear weather. Photo: Allen Dahl.

Yesterday:  Clear skies were over the region with patchy valley fog in places. Ridgetop winds were light (5-10mph) and westerly. Temperatures have been in the low teens along ridgelines and in the single digits in valley bottoms and along Turnagain Pass.

Today:  Partly cloudy to possibly some gray skies are forecast as high clouds are moving through Southcentral. Ridgetop winds look to remain light and westerly today with a bump into the 15-20mph range this afternoon. Temperatures should remain near 10°F in valley bottoms and in the low teens along ridgetops.

Tomorrow:  One last clear(ish) day is on tap for Sunday before a series of cold winter storms heads in for the Christmas week! Ridgetop winds will shift around to an easterly direction tonight and will slowly increase on Sunday into the 15-20mph range by the late afternoon. Snow looks to begin falling Sunday evening. Temperatures will slowly rise with this system but will remain cold enough for snow to sea level. Stay tuned!

*Seattle Ridge weather station is not reporting, we hope to have it back online this week.