We will begin daily avalanche forecasts on Saturday 11/20

Conditions since the last significant snowfall on 11/11 have been marked with low density snow at the surface combined with a lack of reactive weak layers, cold temperatures, and relatively calm winds throughout the forecast area. That trend is forecast to change, with increasing winds starting on Wednesday 11/17 and continuing into Thursday 11/18. Wind speeds should be around 20 mph with gusts to 30 mph at mid and upper elevations out of the west and northwest. Some favored areas could see gusts to 40mph. This is not the typical wind direction for storms in Turnagain pass, so look out for wind loading in unusual areas and especially on east and southeast aspects (e.g. the Repeat Offender avalanche path near the uptrack on Seattle Ridge). The advisory area is not supposed to see the brunt of this arctic outflow event, but there will still be enough wind to redistribute snow into fresh wind slabs. Temps will remain cold, especially with the added wind chill. 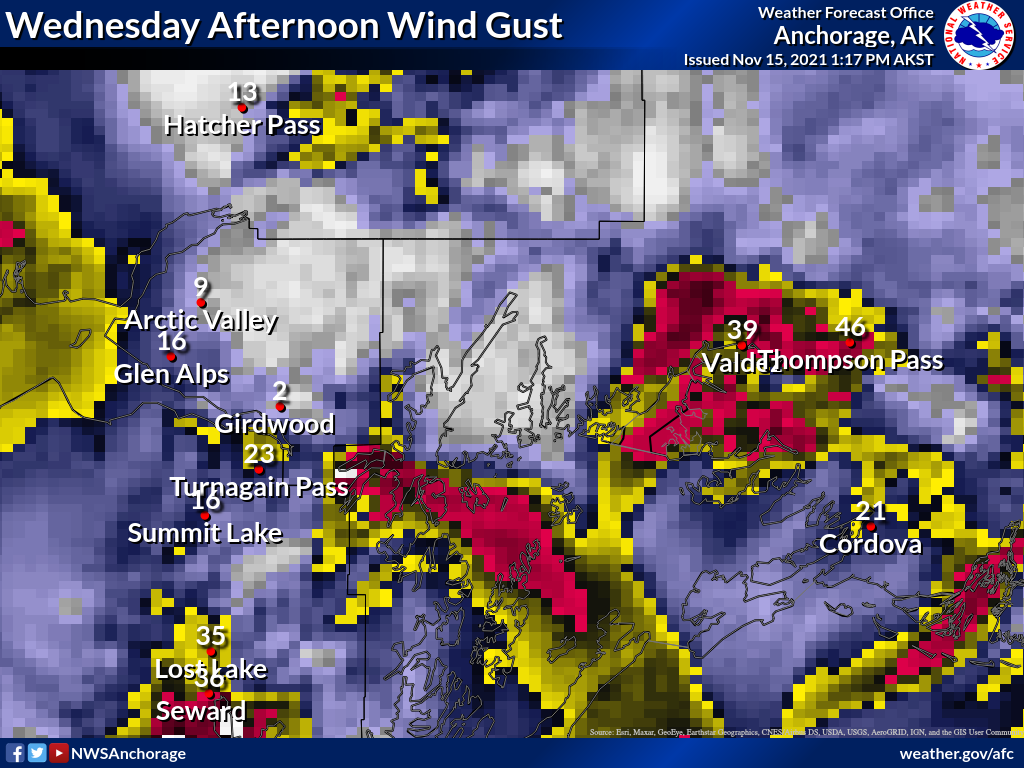 Despite observations of widespread weak layers in the advisory area (surface hoar, near surface facets) there has been a lack of avalanche activity due to the fact that the snow on top of these weak layers has not had enough strength to act as a slab. An observation from Eddie’s on 11/15 provides the first clue that this is changing, where skiers triggered multiple avalanches within the upper snowpack. The increase in wind speed throughout the area combined with the low density snow will provide ample opportunity for the formation of new wind slabs on top of the existing weak layers. With the very low density surface snow it will not take much wind for it to be transported and start to form slabs on leeward aspects.

Pay attention to how the surface snow is being redistributed by looking for texture on the snow surface, fresh cornices, and pillows on leeward aspects. Since our current weak layers are relatively shallow in the snowpack it would be a good idea to use small and safe slopes to test how reactive fresh wind slabs are before venturing into bigger terrain. Be aware of the terrain below you, especially at lower elevations, since we still have a relatively shallow snowpack with protruding alders and features like creek beds and gullies not filled in. 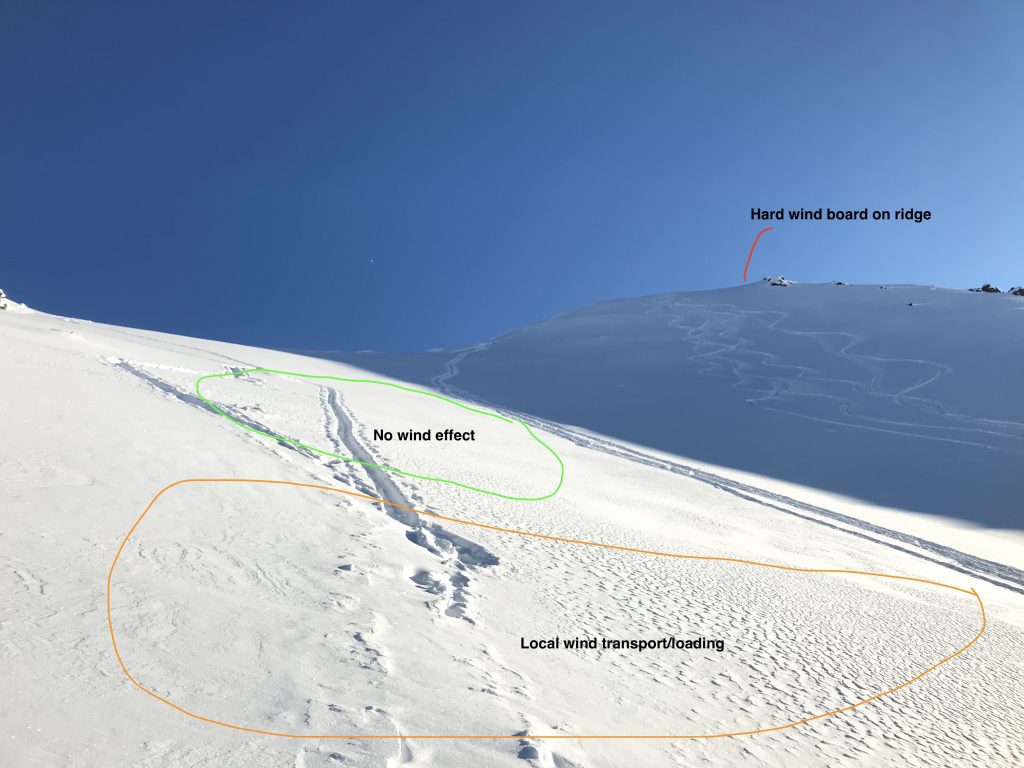 Recent photo from Chugach State Park that shows the type of wind texture patterns to look for when locating wind slabs. Photo courtesy of Peter Wadsworth.

It is hard to predict exactly which of our current weak layers will be most reactive with the coming wind event, and for practical purposes it doesn’t matter much since they are all within the upper 2′ of the snowpack and could react to fresh wind loading. The current snow surface has large surface hoar at all elevations and aspects we have observed (here, here). On Seattle ridge yesterday we were only able to locate the surface hoar buried by the 11/11 storm in some locations, which seemed to be at higher elevations (above 2000′), because of the soft snow above and below the surface hoar.

In addition to these surface hoar layers there is a concerning layer of near surface facets buried approximately 2′ deep and located directly above the Halloween storm snow. This layer should be identifiable in snow pits because there is a notable change in hardness and grain type between the Halloween storm snow (moist or melt freeze at elevations below 3000′) and the low density snow above. Keep an eye out for this layer in stability tests and slope tests because it could produce larger avalanches due to the depth and potential for wider propagation.

Wind slabs formed on any of these layers have the potential to linger for longer than normal because of the nature of the of weak layers. As Andrew stated in his last update, we are still familiarizing ourselves with the snowpack in the advisory area and have not been able to investigate upper elevations above 3000′ recently. Our best estimate is that some if not all of these weak layers exist throughout the advisory area and are likely to produce natural and human triggered avalanches with additional wind loading. 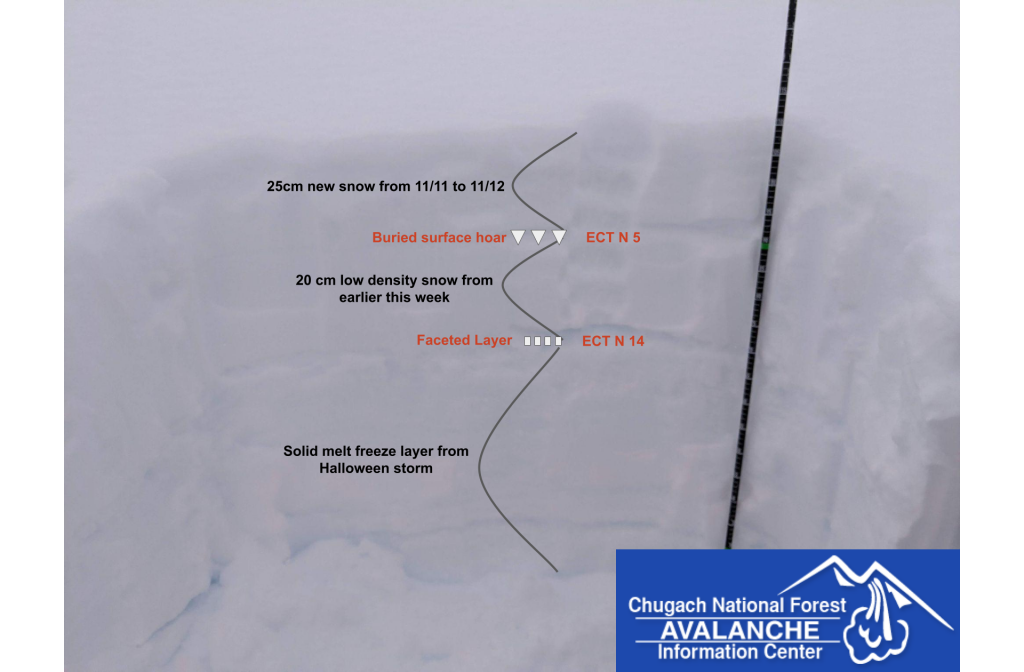 Despite the cold temperatures, we observed recent movement on several glide cracks along Seattle ridge yesterday. This type of avalanche is very unpredictable and it is possible that it could release spontaneously even in cold conditions. Try to minimize your time underneath them and be aware that they can be a hazard for route finding on descents. 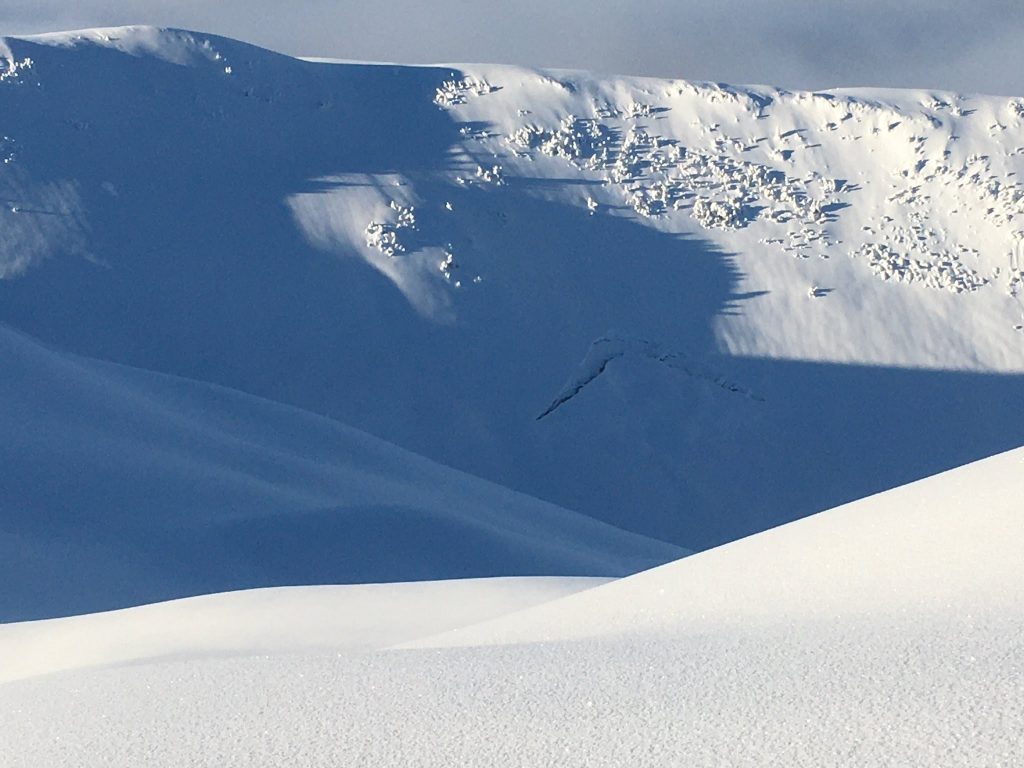 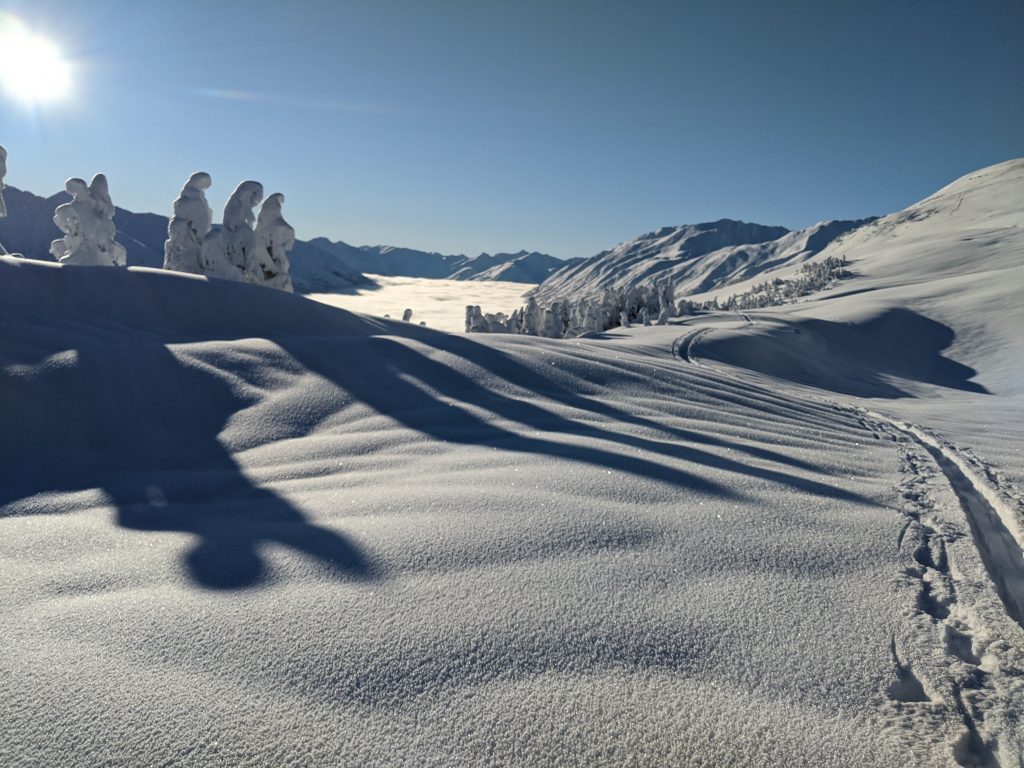