October 2021 continues to produce. It may be mostly raining at sea level, but over the past several days between 2-3′ of snow has fallen in the higher elevations in Girdwood and Turnagain Pass. Since Oct 1st, there have been a number of early season avalanches, three incidents with burials, and more stormy weather is on the way. Details on all this below. But first, some basic avalanche re-freshers:

1- Avalanches are most common during and just after a storm.
That means today, Oct 22nd, and into the weekend, human triggered avalanches may be likely at Turnagain Pass and elsewhere. Careful snowpack assessment skills and a conservative mindset are necessary before committing to the steeper slopes.

2- Red Flags. If you see/experience one or more red flag, the snowpack is telling you it could avalanche if you are on or under a slope steeper than 30 degrees.

3- Avalanche danger exists on many summer trails. Even if the trail is snow-free, if there is snow on the slopes above the trail, that creates an avalanche hazard.

4- Terrain is always the answer. When in doubt, avoiding avalanche terrain is the key. This is staying off of, and out from under, slopes steeper than 30 degrees. It also means scrapping many hiking plans, unless someone in your group has avalanche assessment skills.

5- Avalanche Rescue Gear. Avalanche beacon, probe and shovel. Be sure these items are all operating properly and know how to use them. Ask your partners if their gear is in order and do they know how to use it. 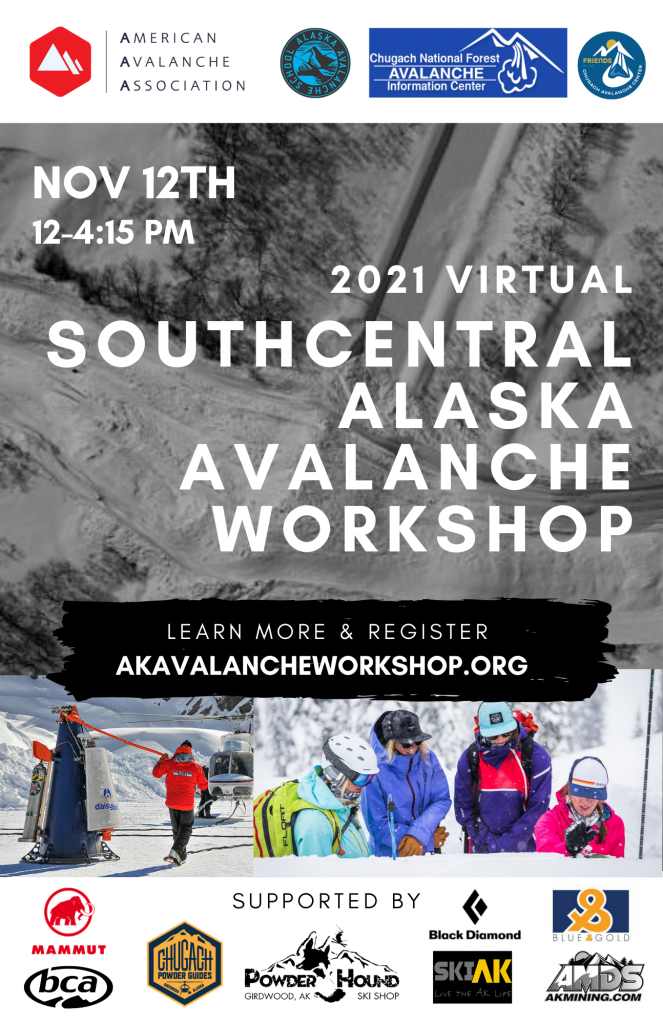 There have been three avalanches involving people, that we know of, this early season. Two were groups on foot and not engaged with winter backcountry recreation. Only one of these was in our region on the Chugach National Forest (CNF).

Oct 6, Crow Pass Trail
One hiker caught, carried and almost completely buried in a relatively small avalanche. The hiker was rescued quickly by their partner. The two hikers were on their way back down from the Crow Pass Cabin during stormy weather. See the link in title for more information.

Oct 6, Hunter Creek – South of the Knik River valley (outside of the CNF)
Three sheep hunters were caught and carried over 1,000′ in a large avalanche in a very remote area. One hunter was buried face down with only a boot exposed and rescued by the other hunters. Two hunters sustained injures and the group was rescued several hours later by the Alaska Army National Guard.

Oct 21, Peak 3 (outside of the CNF and in Anchorage’s Front Range)
One skier was caught in an avalanche and reported to have been partially buried. They were able to self rescue. Details are still coming in regarding this avalanche.

Most start zones have several layers of snow at this point, beginning from late September. Snowpack depths in these higher elevations, above 2,500′, range anywhere from 3-6′ deep at this point. The recent stormy weather has been warm and rain has been falling up to 2,000′ at times. This has kept the snow depth at 1,000′ (Turnagain Pass parking lots) fluctuating from 0″ to 6″, but clearly snow depth increases significantly with elevation.

There was a known weak layer of facets in early October, but this layer has been showing signs of stabilizing with the warm conditions since last week. We have had no reports yet from the field since the last, and most significant storm, ended yesterday (Oct 21st). Before the storm, there was a layer of surface hoar present, which could be an issue and something we’ll be assessing moving forward. As mentioned above, with up to 2 feet or more of new snow in places, we can expect avalanche concerns and potential for human triggered avalanches.

Upcoming weather looks unsettled with light precipitation forecast and on and off cloud cover. We could get lucky for some clearing here and there, possibly later this weekend. Keep tabs on our weather page!