While two hikers were on their way down from the Crow Pass Cabin, heading toward Girdwood, near the Crow Pass Trail, one hiker triggered an avalanche, was caught and almost completely buried, then recovered quickly by their partner.

The following is a first hand account that was posted on the Crow Pass Trail facebook page
HERE.

This area was the site of a fatal avalanche in November of 1997 and a very near miss with a partial and full burial in January of 2020.

Hey there fellow hikers !
I made a post on Sunday 10/3 inquiring about the conditions of the first 3 miles of crow pass from the girdwood side (to the cabin).
Oof!
We started hiking from the parking lot on Tuesday 10/5 @11:25am. The first mile was just packed down snow (to the split in the trail at the sign that goes straight to the mine area and right to the switch backs to head up the pass) which would be good to have ice cleats for but we did not unfortunately.
Not too far from taking a right at the crow pass cabin and eagle river sign we encountered patches of waist deep snow, feeling adventurous we decided to plow on and saw some skiers that went the mine area way then up to the old steel cable (that is still there from pulling up the mine equipment).
After what seemed like forever of following foot prints from the last folks to go up to the cabin we got to the water fall close to the last turn before you get into the pass where the cabin is , we lost the tracks but could see the cabin! (Arrived at cabin @3:45 pm)
We stayed the night in the cabin and the wind and snow blew hard all night and our foot prints up to the cabin were gone quickly! We woke up at 8am and prepared to head out . Feeling worried about the worsening conditions in weather we decided to wait a few hours to see if the weather, visibility and wind speed got better, it did not.
At this point we debating staying for a potential rescue but decided we didn't have the gear/food/heater fuel to stay long, so we took our chances and set out despite the waist-chest deep snow ! All of your foot prints were completely gone! We made it down to the water fall relatively quickly and followed the trail the best we could read between rocks and exposed plants. Soon there after we could not see anything due to viability and snow flying our eyes , we believe we got above the trail for a bit. That is where the trouble happened! My partner fell and rolled a couple times starting a small avalanche that quickly swept her up ! The snow the slide stopped 2 steps behind me! Luckily it only took her about 75 feet and stopped before a big patch of exposed rocks, I raced down to her seeing nothing but a foot! Thankfully I dug her out within 5 minutes. After gaining composure we both attempted to dial 911 on our phones but no such luck. We slowly continued on only hiking rock to rock then managed to find the trail again for a little bit, after about 20 minutes we found the steel cable from the mining equipment and soon after decided to head straight down to the mining equipment on the mine area trail with the guidance of exposed plant life telling of shallow snow. Once we made it to mining equipment we found the path that was only about 6-8 inches covered in snow. Finally made it back to the cut off sign ! We made our way down the last mile crazy fast which was still pretty shallow snow but slushy and slick. Made it to the car feeling endlessly gratefully we escaped with out lives!!!!❤

PLEASE ! UNLESS YOU ARE A EXTREMELY EXPERIENCED HIKER AND FULLY EQUIPPED WITH SNOW GEAR DO NOT GO UP TO THE CABIN , THIS SEASON IS OVER !” 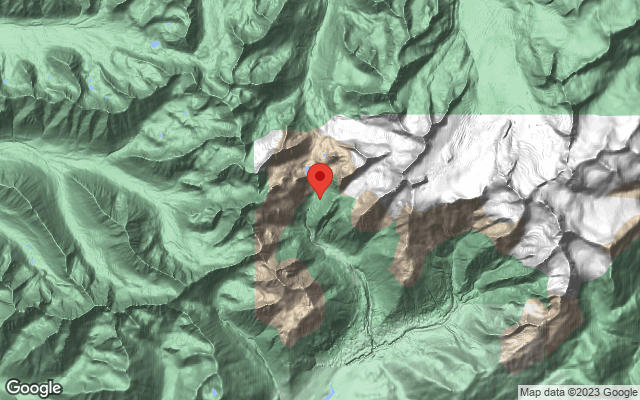