The avalanche danger is LOW this morning and expected to rise to CONSIDERABLE through the day as surface crusts melt and the snow loses strength on slopes seeing direct sunshine. Once surfaces melt and boot-top wet saturated snow exists, wet loose avalanches will be likely to trigger on slopes around 35 degrees or steeper. Natural wet loose and wet slab avalanches will be possible with the heat of the day as well. These avalanches have the potential to be large and dangerous. Pay close attention to surface conditions and how crusts melt. Avoid being under glide cracks and give cornices a wide berth.

CROW PASS, PORTAGE VALLEY: Natural avalanches are possible and could send debris over summer hiking trails and into the valleys during the afternoon and evening hours. Hiking on summer trails that pass through avalanche terrain is not recommended during these times this weekend.

CNFAIC End Of Season Operations:  Daily avalanche forecasts have ended as our forecast season and funding winds down. We will forecast today, Sun, Tues, Thurs this week, and put out our springtime tips this coming weekend. We would be grateful for any observations as our field time has wound down as well – thank you!

Over the past two days the mountains have been much quieter avalanche-wise. However, in the Summit Lake area south of the forecast zone two large natural wet slabs released on Butch Peak (likely 2 days ago on Thursday). Additionally, one human triggered wet sluff occurred in Lynx Creek yesterday (Friday). 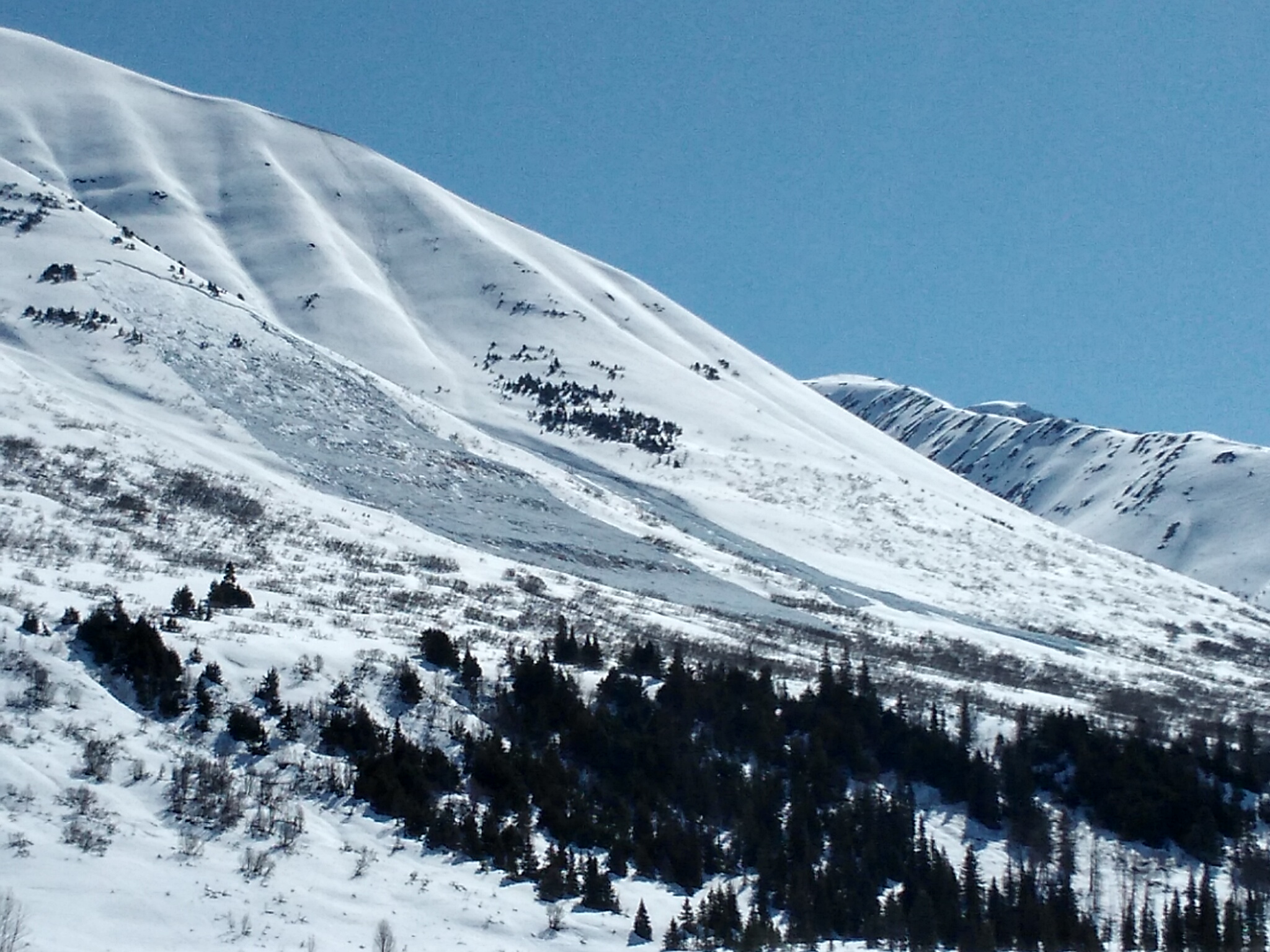 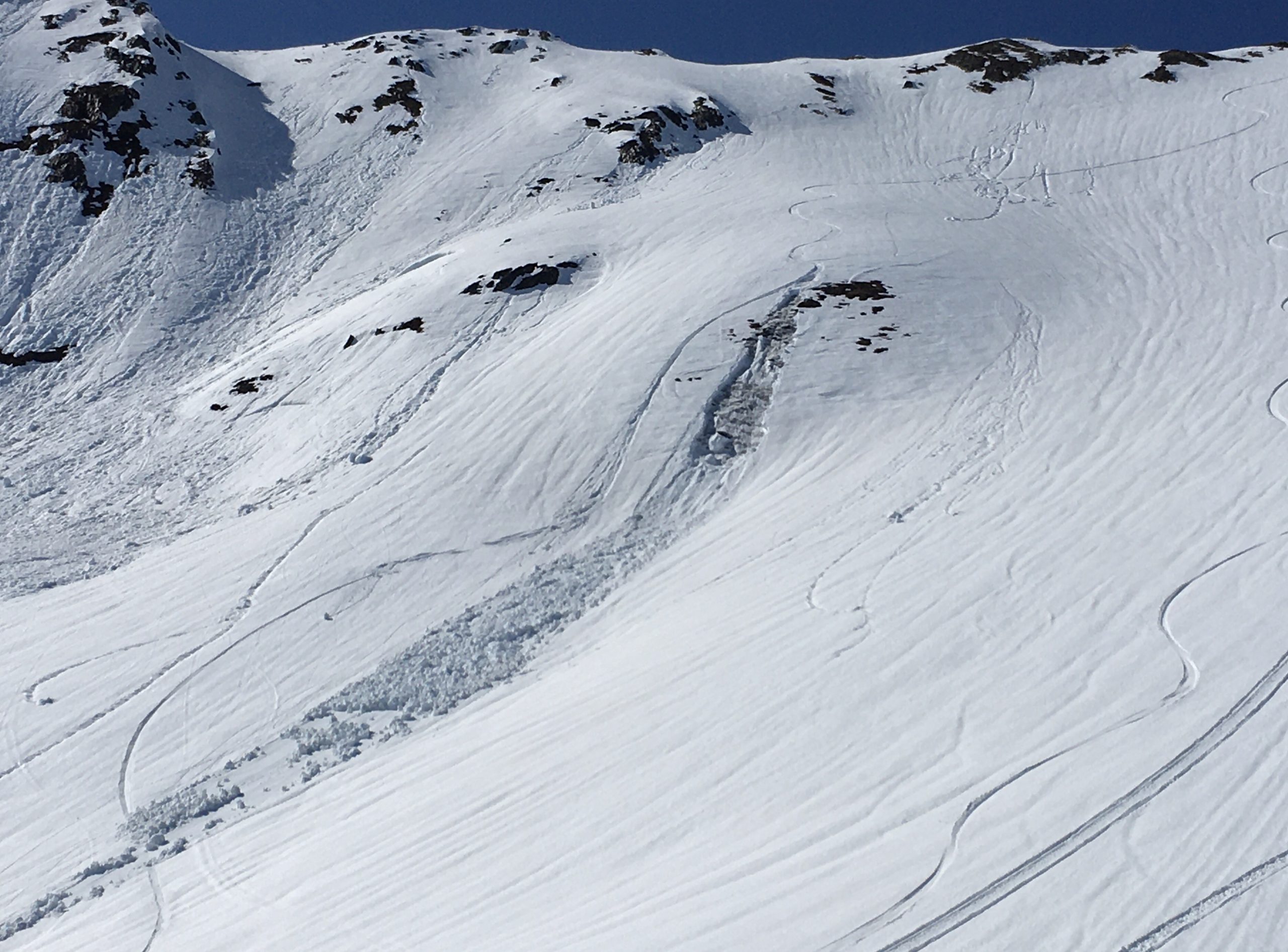 Wet loose avalanche triggered by a snowboarder on a thin steep rocky feature. Avalanche was small, but took the all the snow (2′ or so) that existed on this feature. Note that the other avalanche debris and roller balls are old – likely from a week ago. 4.23.21.

Triggering a wet loose avalanche is likely on steep slopes that have softened enough to harbor boot-top (or deeper) wet surface snow. These ‘sluffs’ could be small or large pending the size of the terrain. They could gouge down and take the whole snowpack if the conditions are right and especially if the snowpack is thinner. These types of avalanches are nothing to mess with and can be quite destructive. Wet slabs on slopes seeing significant warming will be possible to trigger and can be extremely destructive. They can, and often are, triggered by a wet loose avalanche. Wet slabs are most likely to occur in areas with a thinner snowpack, such as Summit Lake. Although natural wet loose and wet slab avalanches will be possible today, it’s the human triggered avalanches that will be likely. Hence the danger rising to CONSIDERABLE in step with daytime warming and sunshine.

Timing is everything… The goal for a fun day in the mountains is to catch the surface when it’s melted a few inches but not so much that your boot or snowmachine track is sinking way down into 10+” of mush. At this point, it’s time to head to another aspect. As we know, north and east aspects warm first, then south, then west, and last north gets the sun again this time of year. Paying close attention to how much wet snow exists on the slopes you encounter is key. Exit routes require thought as well. We don’t want to be forced into traveling under steep rocky terrain baking in the sun that could shed snow onto us.

Cornices: These features are oozing over in the warm temperatures and will become easier and easier to trigger as time goes on. Be aware to not accidentally travel onto one and limit any exposure under them.

After 8 days of unseasonably warm springtime temperatures bringing down the house, it looks as though the mountains are starting to adjust to the spring transition. In case you missed it, here’s a little video of the widespread natural avalanche cycle that occurred last weekend. Since then, we’ve seen a handful of natural glide avalanches, wet loose and wet slab avalanches. Most of the wet slabs are being seen in areas with a thinner snowpack, such as the Summit Lake area in the photo above. As we move forward, we are not out of the woods. Remember, large natural avalanches are still possible and human triggered avalanches likely. These could be significant enough to run into valley bottoms in areas with enough snow left on the mountainsides. 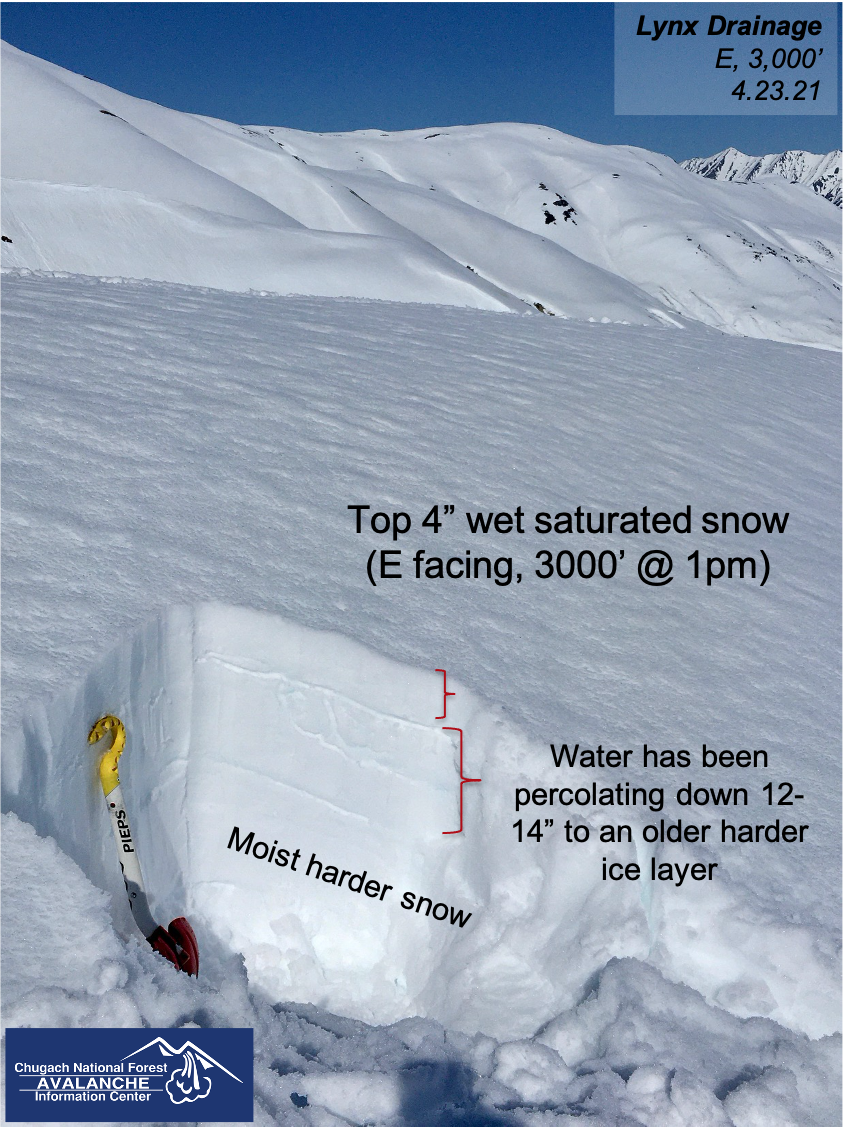 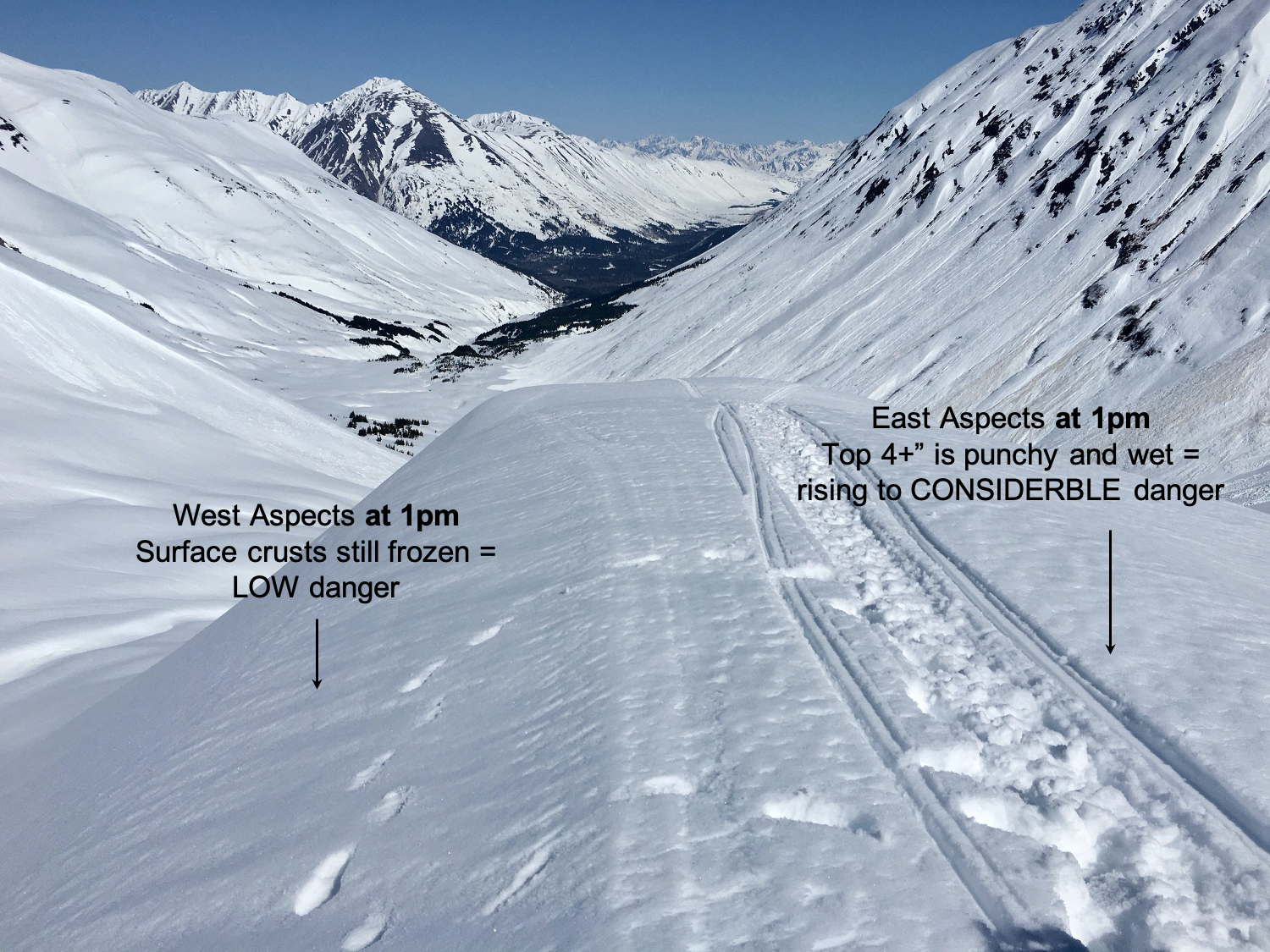 A big thank you to APU’s snow science course for not only assessing the corn skiing conditions on Sunburst yesterday, but for providing snowpack information throughout the season! See their pictures and comments below. 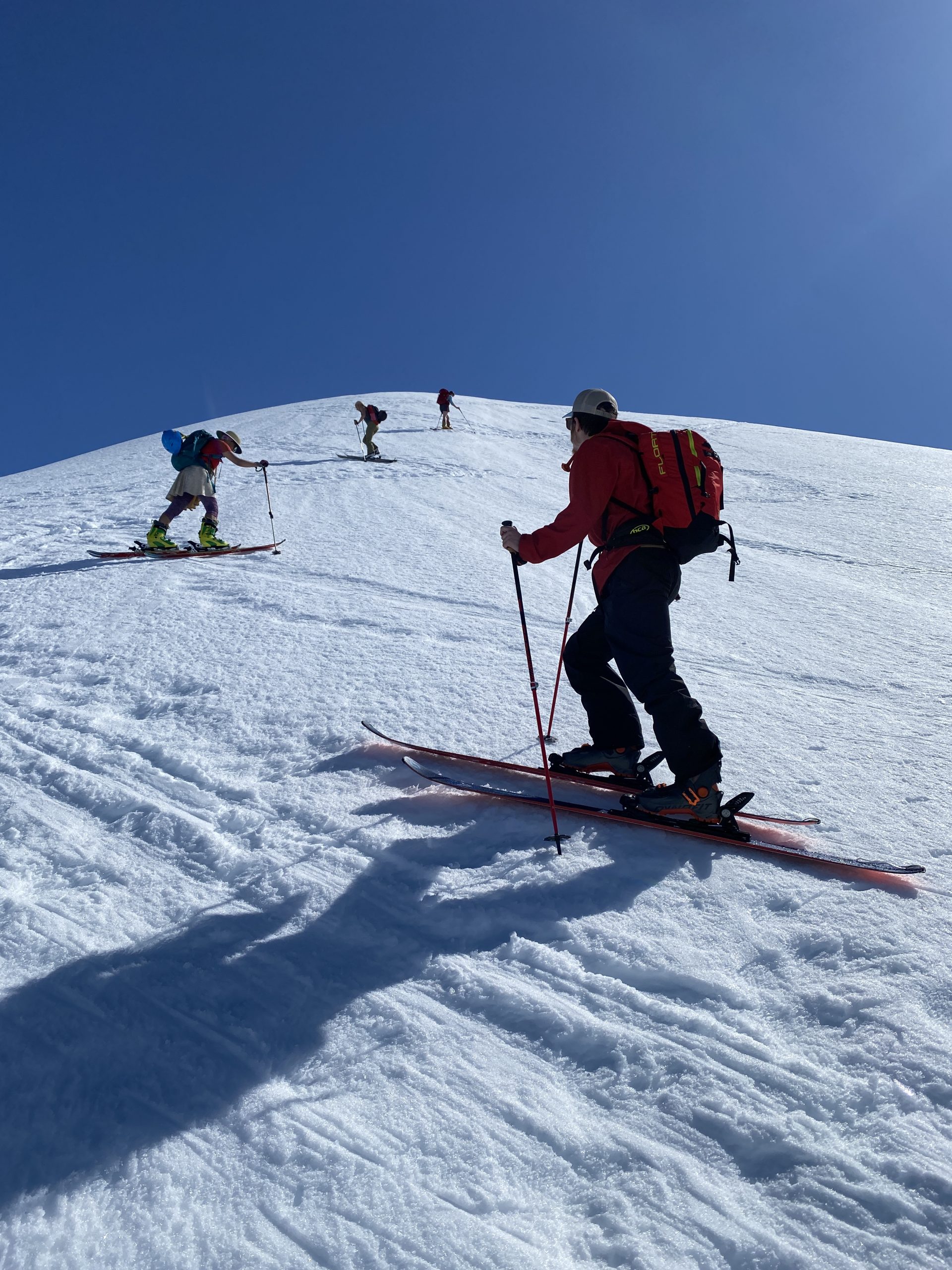 “Tricky skinning along the Sunburst lower ridge line. While during our tour avalanche hazard was low, sliding hazard was imminent. Time to think about self arrest skills, Whippet and potentially ski crampons!” 4.23.21. Eeva Latosuo. 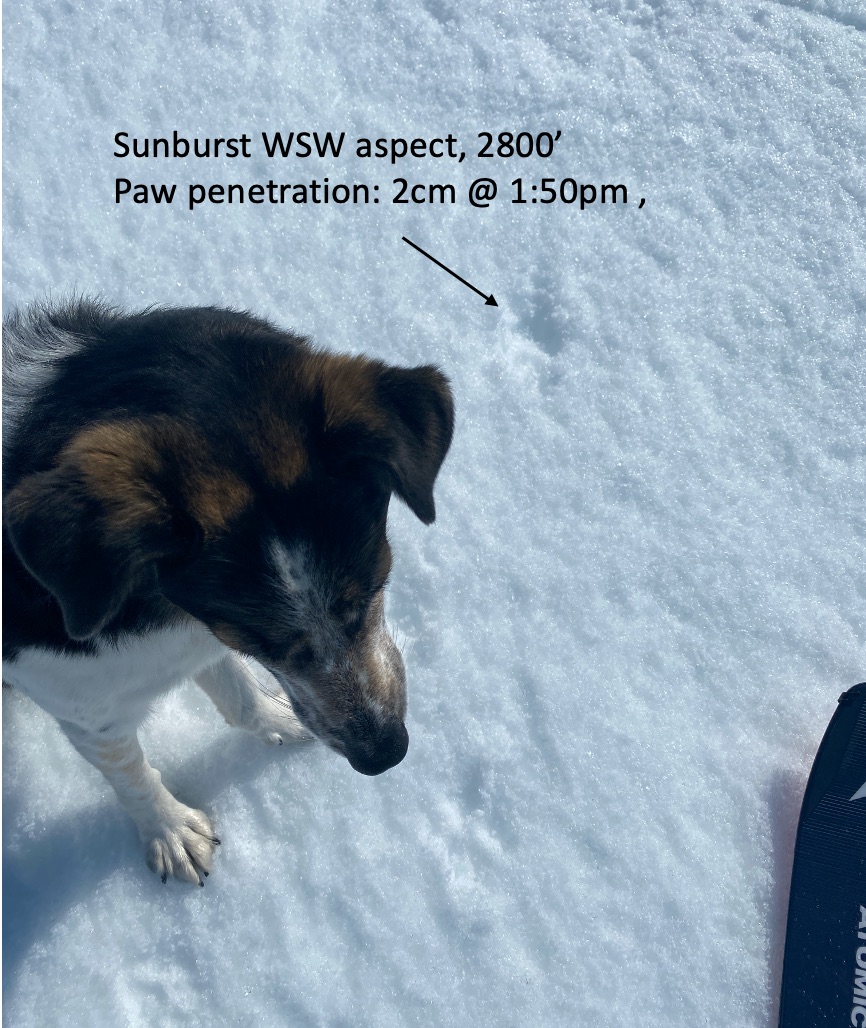 Glide avalanches are releasing as the entire snowpack warms up. This is the time to not trust any glide cracks and limit/avoid time under them. They are opening up and releasing around the region, including easily accessed areas such as the front side of Seattle Ridge.

Bears:  In all seriousness, bears are waking up and folks have been seeing them roaming about. It’s a good thing we are trained to observe natural hazards and now we can add bears to the list.

Yesterday:  Sunny skies with light easterly ridgetop winds were over the region. Temperatures warmed to the the low 40’sF along the higher peaks and between 55-60F in the lower and mid elevations.

Today:  Another round of sunshine, light south to easterly ridgetop winds, and warm springtime temperatures is forecast. Overnight lows, last night, were in the 25-35F range in valley bottoms and in the 35-40F range in the mid and upper elevations. Daytime highs should be near 60F in the low elevations today and in the high 40’s F along the high ridgelines.

Tomorrow:  Continued sunny skies and light east winds are expected until early next week as the blocking high pressure remains entrenched over Southcentral. Temperatures are expected to continue to drop into the 25-35F range overnight with clear skies in valley bottoms and increase through the day to near 60F in the low elevations and to the high 40’s F in the high elevations.