Regular route up Lynx Creek Drainage into the upper bowls. High point of 4,000′. Mostly East, North and West aspects traveled. East slopes were very soft by 2pm and west were still a bit crunchy when we left around 3pm.

Wet loose avalanche triggered by a snowboarder who pushed wet snow over a rocky feature. Avalanche gouged to the ground in a thin steep rocky roll.

Warm temperatures melting the top foot or more of the snowpack.

There was also widespread avalanche debris from avalanches during the past week. Most of these likely occurred several days to a week ago. We did not see any natural avalanche activity.

Parking lot to 2,000' - wet snow becoming unsupportable by noon ish. If you got off your sled you'd sink in several feet.
Above 2,000' and up to 4,000' - At 3pm, all aspects had wet surface snow. North had 2-3" of melted snow, east was over a foot in places and west was softened just an inch or so at this time, did not travel on southern exposures.

*Thin areas in the snowpack with only 3 or less feet of snow over ground/rocks, has very punchy, wet and unsupportable snow to the ground. This is why the sluff that was triggered was able to gouge and take the full 2' or snow of wet snow.

We dug one 3' deep pit at 3,000', E aspect at 1pm. Slope was ~15 degrees and baking in the sun.
The top 4" was very wet and saturated snow.
Below this we could see where water has been percolating down 12-14" into the dense moist snow below, making channels of ice (as this snow was mostly frozen at the time) down to a layer of ice ~1cm thick. The layer of ice was likely formed by melt water earlier in the week that had refrozen.
Under the ice layer was old snow that was moist - not wet (you could make a snowball but just barely).
No weakness found in top 3' other than the top 4" would sluff off easily (wet loose avalanche issues).

Tracking the depth of the wet snow and likelihood of triggering a sluff in this wet surface snow was the main concern. We also were aware a wet slab may be able to release if the snow was melted far enough down. We could tell much of the snow today had not melted as deep as it had in past days. 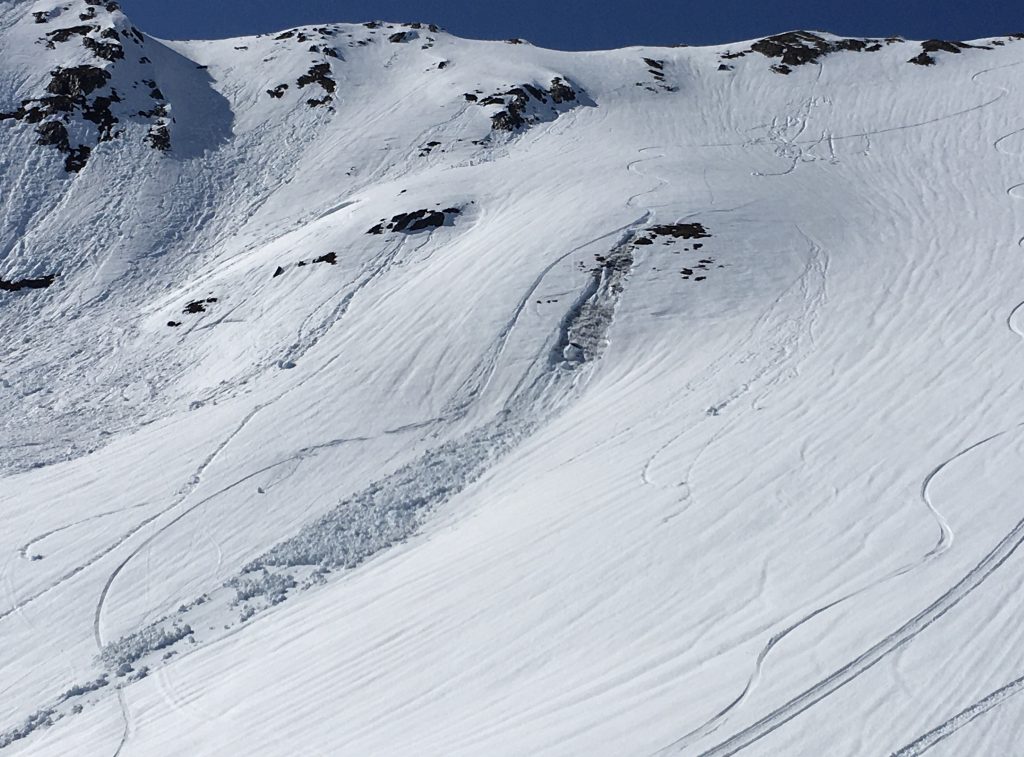 Wet sluff triggered by a small 'push-a-lanche' by a snowboarder on top of a steep rocky slope. 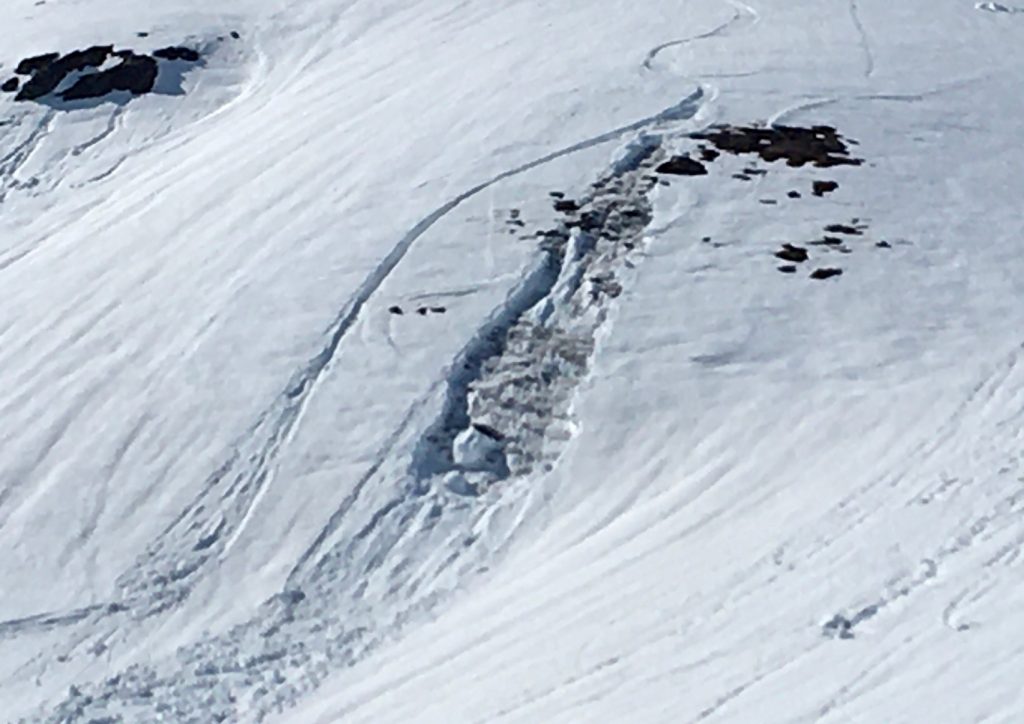 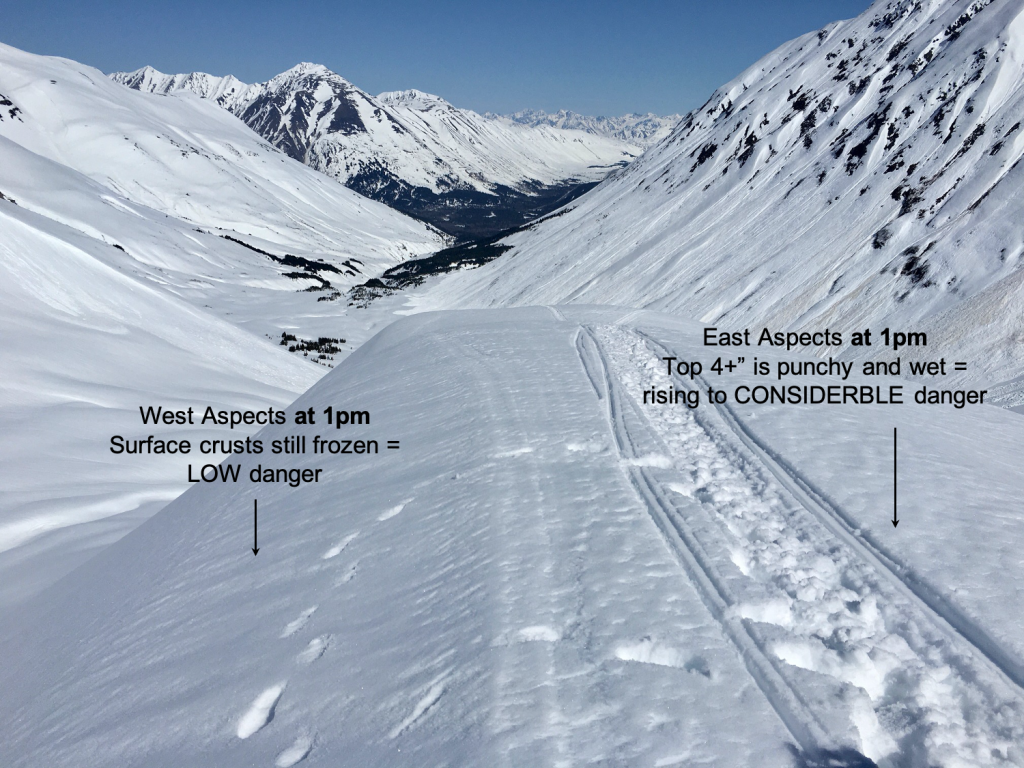 Snow along a sub ridge that faces both east and west. Boot sank about 10" on the east side at 1pm and was still crusty on the west. 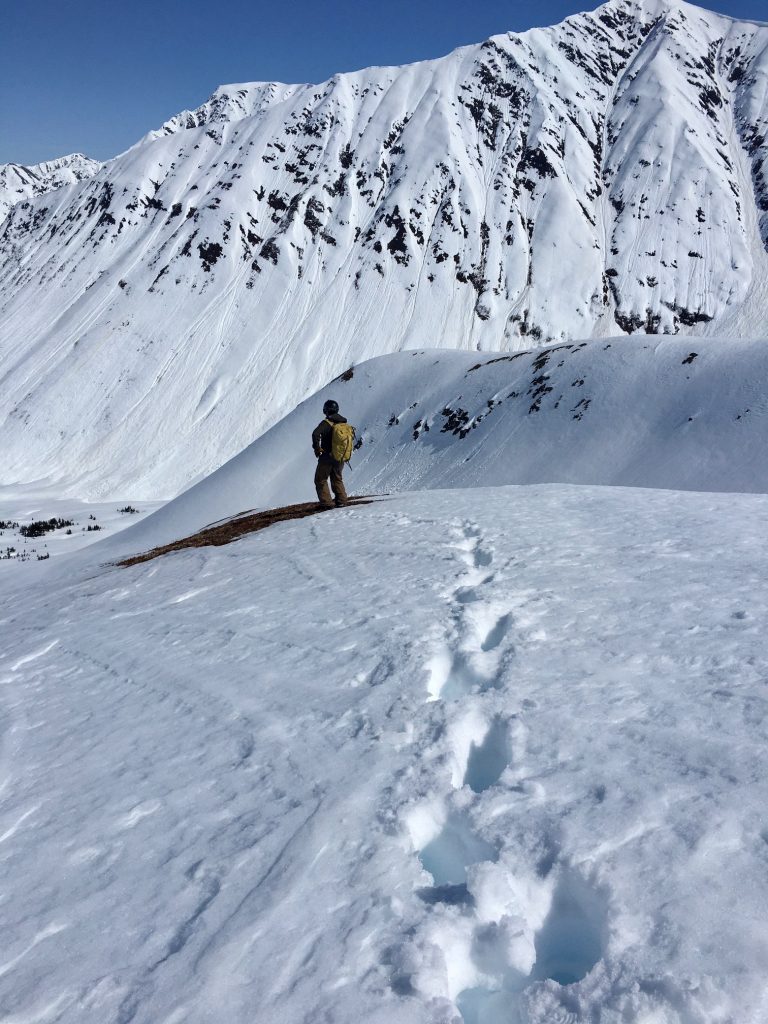 Thin snowpack area on a low angle north aspect. Boot penetration was 2' or to the ground. 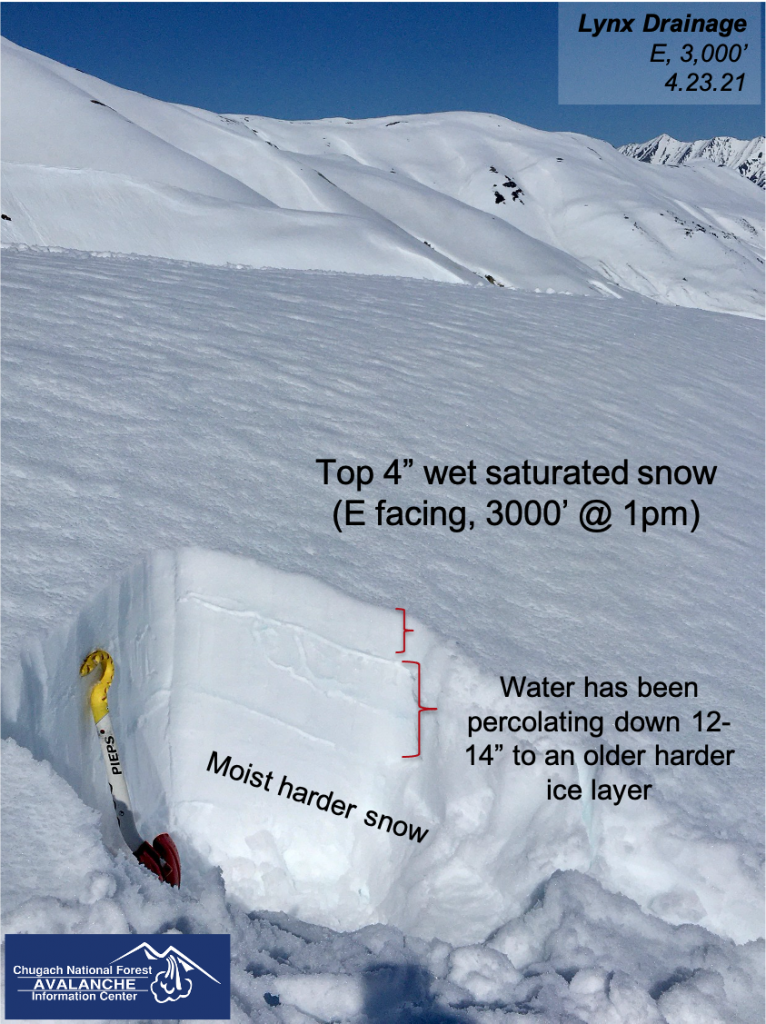 Pit at 1pm on an east aspect.

Widespread old avalanche debris - likely from a week or so ago. 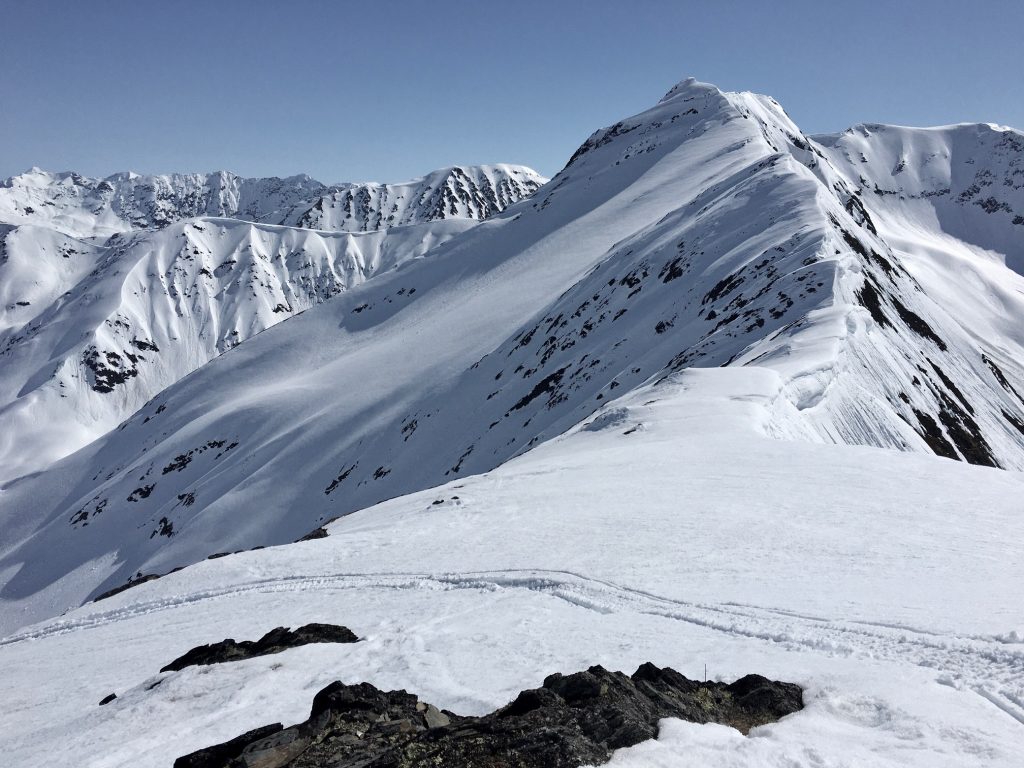 Surface crusts were softening on all aspects to some degree up to ridgelines. 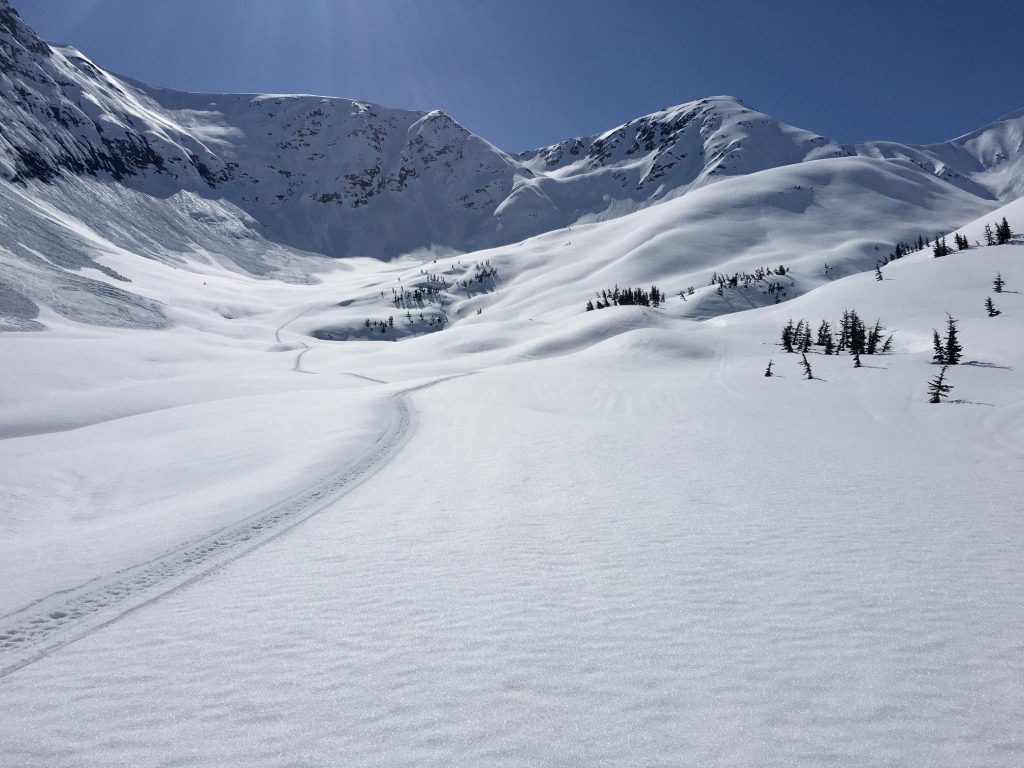 Very nice corn snow conditions where the surface has only softened 3-5" but was not punchy. 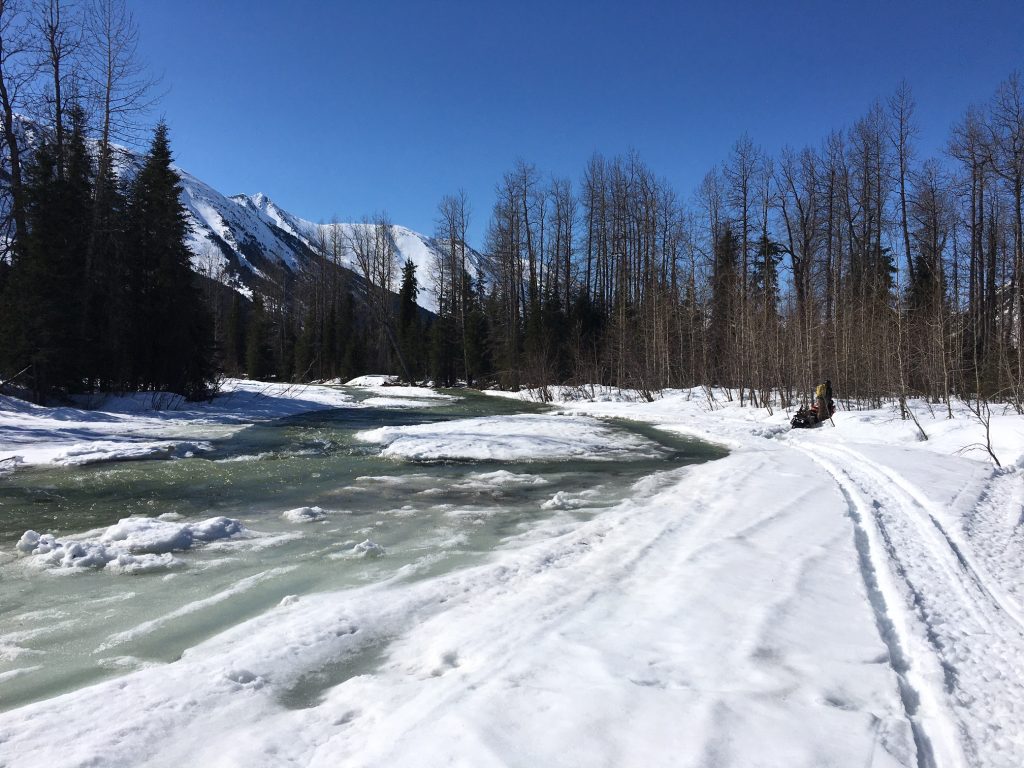 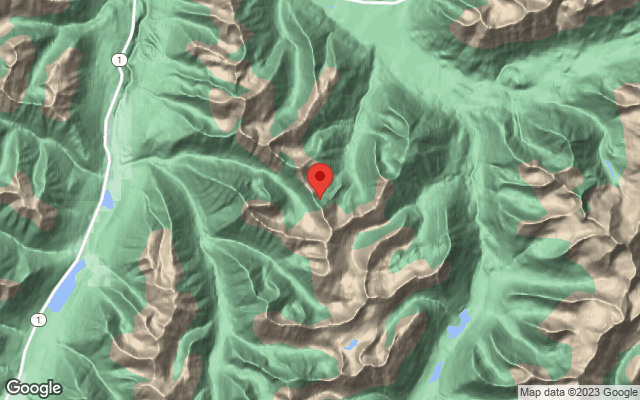