The avalanche danger is CONSIDERABLE today for how we should approach the mountains. Three large natural avalanches released yesterday just south of our forecast zone in Summit Lake, one covering the highway. Although natural avalanches are not expected today, springtime warming and this event deserves our respect for unusual avalanches this time of year.

That said, human triggered slab avalanches 1-3′ deep remain possible on slopes 35 degrees and steeper due to buried weak layers. Additionally, watch for shallow new wind slabs formed in yesterday’s 4-6″ of new snow as well as sluffs in the new snow. Slopes with recent wind loading will be the most likely places to trigger a slab avalanche. Pay attention to signs of unstable snow and any warming on the snow surface that may occur this afternoon.

SUMMIT LAKE/LOST LAKE/SEWARD:  Increased avalanche danger exists in areas south of the forecast zone. Warmer temperatures in this area may be playing a role in creating unstable snow. Extra caution is warranted by staying off of and out from under avalanche terrain.

Region-wide: Warmer springtime temperatures with snowfall and winds are increasing avalanche hazard in many parts of Southcentral Alaska currently. Remember, most natural avalanches occur not only during stormy weather but also during warm afternoons/evenings.

As seen in last night’s news, debris from a natural avalanche in Summit Lake covered both lanes of the Seward Highway near Mile Post 45 around 4pm yesterday. One vehicle was pushed to the side of road in the moving debris. This avalanche was one of three naturals that occurred off of Summit Mountain on an ESE aspect with start zones around 3,500′; the other two slides did not run to the road. Due to poor visibility and not being able to see the slopes above, we have little information as to the character of the slides at this time. 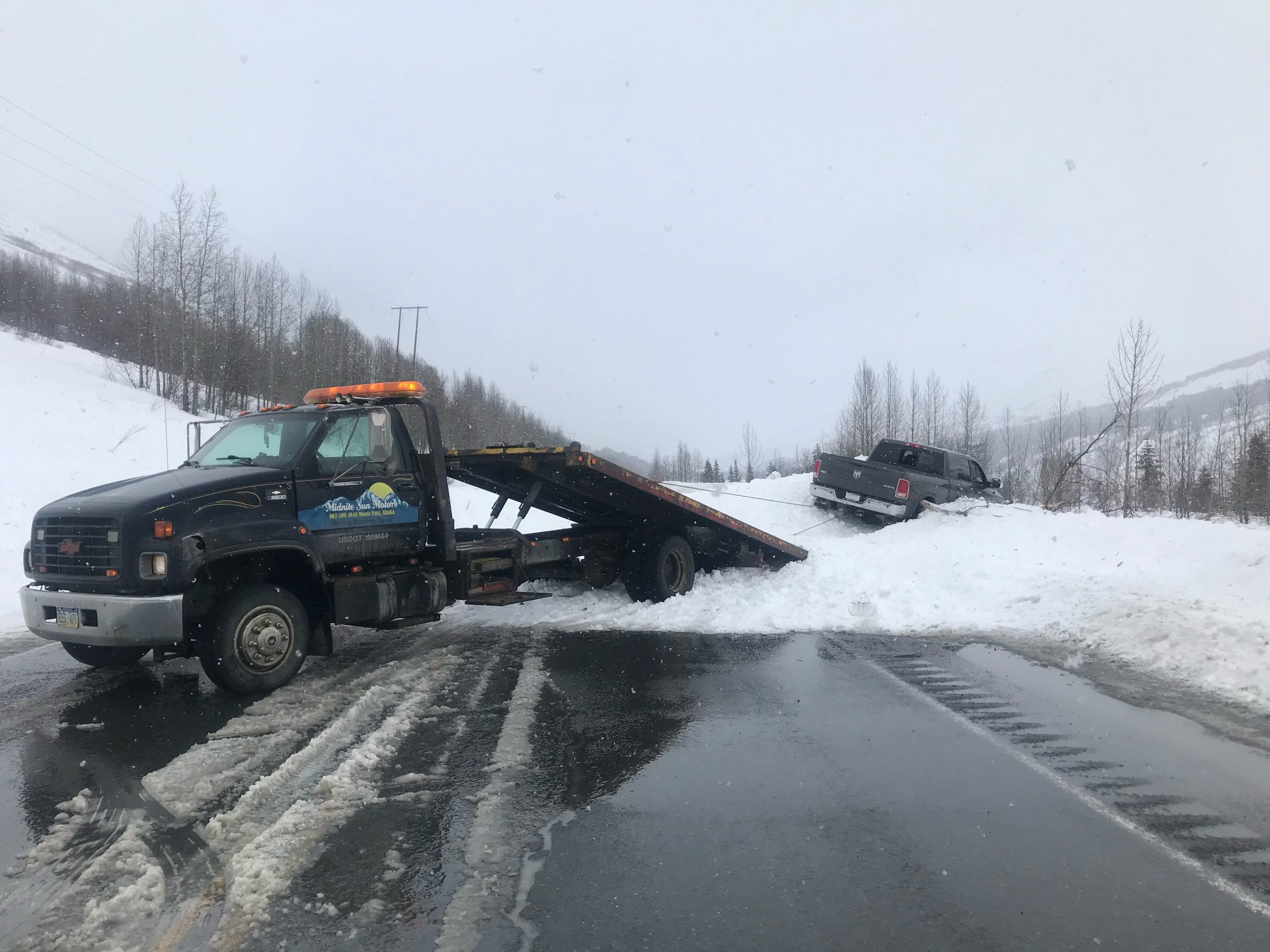 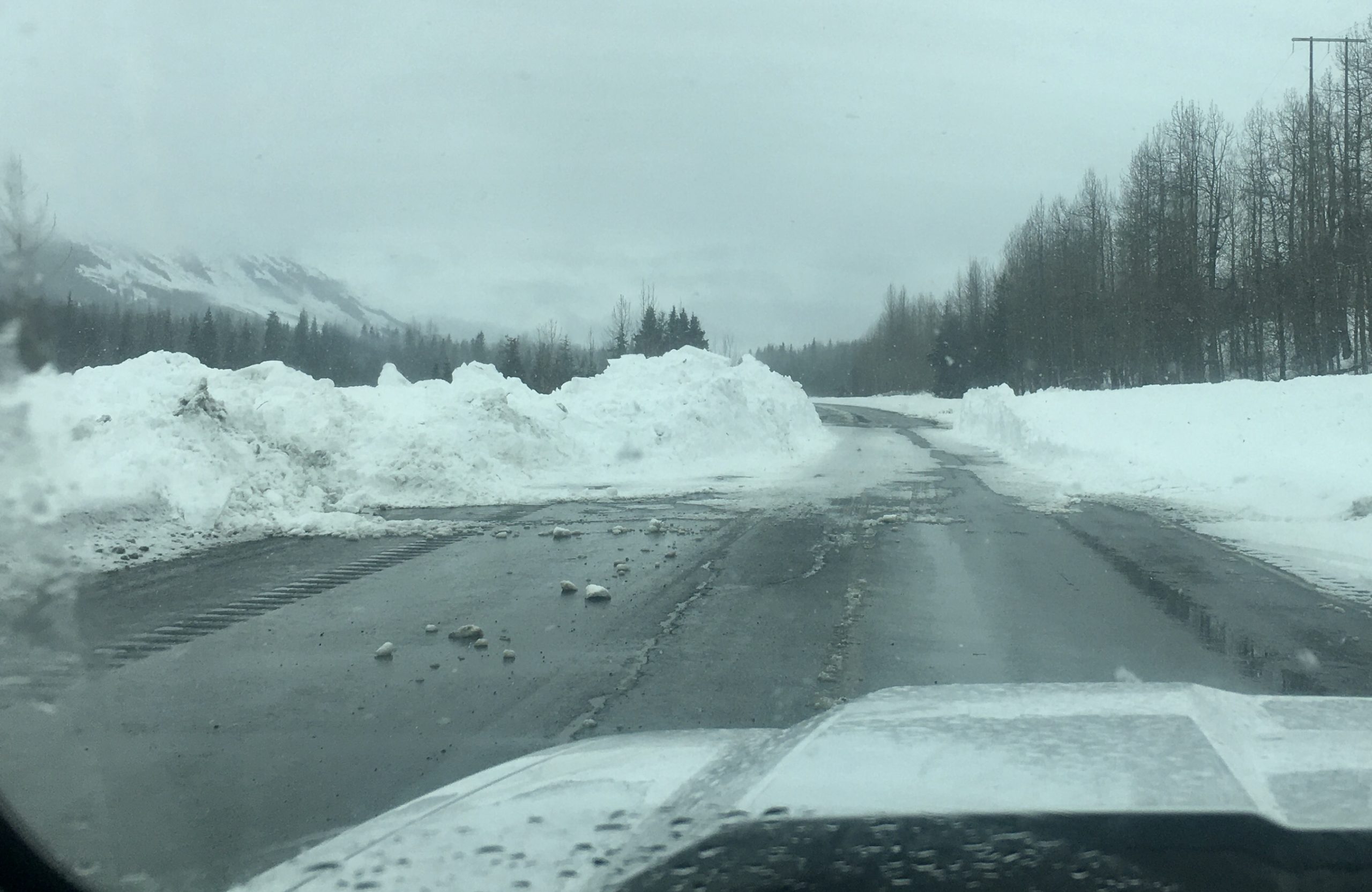 Debris from slide on the road was around 4-6′ deep and covered around a 100′ stretch.

It’s definitely springtime and with that longer days and warmer temperatures. The snowpack can react in wild ways and yesterday’s natural avalanches have us on guard. This is the number one Red Flag for avalanche potential. With similar, but slightly warmer, weather today, we have to be extra cautious. Triggering an avalanche is still in the ‘possible’ category, which fits a MODERATE danger. What fits CONSIDERABLE is the travel advice on the Danger Scale, ‘cautious route-finding and conservative decision-making’. Poor visibility will likely keep many of us out of larger terrain, but avoiding being under large slopes and sticking to smaller terrain and low angle slopes, under 35 degrees, is just a good bet today.

Snowfall yesterday brought around 4″ of moist snow to the mid elevations and possibly up to 6″ at the high elevations. Precipitation has decreased this morning but may set back in later today with another inch or two. The winds have been steady from a southerly direction in the 5-15mph range with stronger gusts and these are forecast to decrease through the day.

Persistent Slabs:  As Aleph described yesterday, wind slabs keep developing over facets or buried surface hoar (persistent weak layers) that have transitioned into persistent slabs as they linger. These are now covered with 4″ or so of new snow and possibly some shallow new wind slabs. Every so often, and what is likely the culprit in the Summit Lake avalanches, is these weak layer(s) fail and produce an avalanche. This remains our concern for people venturing onto steeper slopes. There is a weak layer about a foot down that seems to be our current issue.  The natural avalanches on Raggedtop and the skier triggered slab on Tri Tip last week are the most recent human triggered avalanches. Be on the lookout for areas with previously wind-loaded snow and those with any new wind-loading. The most suspect terrain will likely be at upper and mid elevations, immediately below ridgelines, in cross-loaded gullies, and below convexities.

Wind Slabs:  Watch for new small wind slabs in the 6-8″ range. These are most likely to be found in the higher terrain along ridgelines where the southerly winds blew enough to move the new snow.

Loose snow avalanches: Expect sluffs on steep slopes in the new snow as well the older loose snow that escaped last weekend’s winds. Wet sluffs are likely in the mid and lower elevations in the new snow as the day warms up. The south slopes may run further as old sun crusts sit under the new snow. While it is unlikely these loose snow avalanches will be big enough to bury you, they can be dangerous if they drag you into terrain traps like cliffs, trees, rocks, or gullies.

Yesterday:  Cloudy skies and light snowfall was over the area. Mid elevations weather stations picked up 4″ of moist snow pretty consistently and there could be up to 6″ of drier snow in the higher terrain. Ridgetop winds were southerly in the 10-15mph with stronger gusts. Temperatures were hovering in the low 20’sF along ridgetops and rose to the low 30’sF at the mid elevations.

Today:  Cloudy skies with another pulse of moisture late this afternoon/evening is forecast. A trace to 2″ is expected with a rain/snow line around sea level. Ridgetop winds should decrease from the south through the day (5-10mph) before switching northwest tonight and picking up to 10-15mph. Temperatures should stay in the low 20’sF along ridgelines and near 32F at 1,000′.

Tomorrow:  Skies should begin to clear tomorrow with cooler northwest winds over the region. These winds look to be 10-20mph along ridgelines through the day before easing off Thursday. Temperatures look to dip back to the low teens in the higher terrain and daytime warming should rise mid elevations into the 30’sF.