The avalanche danger is CONSIDERABLE above 1,000′ on all aspects. This is A HEADS UP SNOWPACK as large deadly avalanches could be triggered by people. After a week of snow resulting in 4-6+ feet at the mid and upper elevations with strong easterly ridgetop winds, the mountains need time to adjust to the load. Due to buried weak layers under the feet of new snow, large human triggered slab avalanches are likely on slopes over 30 degrees. These could be triggered remotely, meaning from the bottom, the side or above a slope. Cautious route-finding and conservative decision-making are essential. Give cornices a wide berth and look for signs of recent avalanches and instability.

LOST LAKE/SEWARD/SNUG HARBOR:  These areas are out of our forecast zone but have also received large amounts of snow and extra caution is advised.

A group skiing in the Tincan Trees yesterday triggered several slab avalanches between 16 and 30″ deep on the steeper rollovers between 1,800 and 2,000′ in elevation. These slabs propagated around 50-100 feet wide and were composed of yesterday’s new snow. 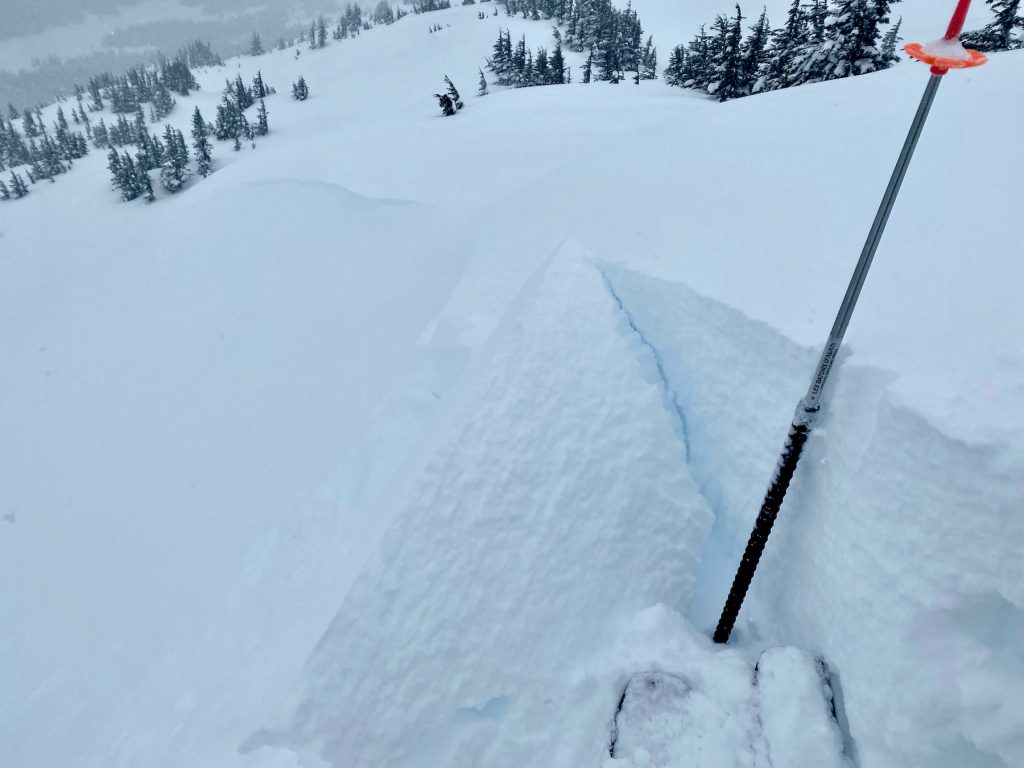 After the major onslaught of 4-5 feet of new snow with strong wind last Tuesday through Friday, another shot of precipitation just ended this morning. This last pulse dropped between 10 and 16 inches of new snow since Sunday afternoon; also with strong easterly ridgetop winds. The group on Tincan yesterday was able to easily trigger many fresh storm slab and wind slab avalanches. These were composed of just this last round of snow. Today, we are expecting those types of new snow instabilities to be a bit more stubborn, but still possible to trigger. What is more concerning however is what this past week’s worth of snow fell on.

Under the 4-6 feet of settled new snow since last Tuesday are various weak layers of buried surface hoar, near surface facets, and facets surrounding sun crusts. Around a foot under that is another layer of buried surface hoar (March 16th layer) and yet a third layer under that (March 2nd layer). We know for certain that these layers were causing extremely large avalanches on Friday when the storm was at its peak. Crowns propagated several thousand feet wide, many of which are now covered back up. With skies possibly clearing this afternoon and tomorrow, it is critical we understand these weak layers are in the snowpack.

If a person is able to trigger one of these buried weak layers, the size of the avalanche will be deadly. We are talking about a 4-6′ deep slab with the potential to take out an entire slope and propagate across terrain features. This exact thing occurred on Saturday at Pete’s North during a short break between storms. Even though the weak layer is quite deep and may be harder to trigger now, if we hit the right spot all bets are off. The folks on Pete’s North triggered a slab up to 4′ deep when they took their skis off and their boots sank deeper into the snow, impacting the weak layer. They triggered it remotely, on a flat spot on the side of the slope. With no good or safe access into the upper elevations yet, we have to be more cautious than normal due to the potential size of this kind of avalanche. This means sticking to the lower angle slopes with nothing steeper above you. With a lot of uncertainty and such high consequences, it’s simply best to avoid the bigger terrain and steep slopes.

In addition to this large avalanche issue are smaller avalanche issues. These would be those storm snow instabilities from yesterday’s snowfall: wind slabs in the 1-3′ deep range and storm slabs in the 10-16″ range. Cornices are also a big concern and could be teetering close to failure. With almost a week of strong winds with all the new snow, we can expect cornices to be dangerous.

For an idea of how much snow, and water weight, is on the most recent weak layer, which is the March 22nd layer that consists of buried surface hoar, near surface facets and sun crusts, see the numbers below. We call it the March 22nd layer because that’s the day the storm began and when it was buried. 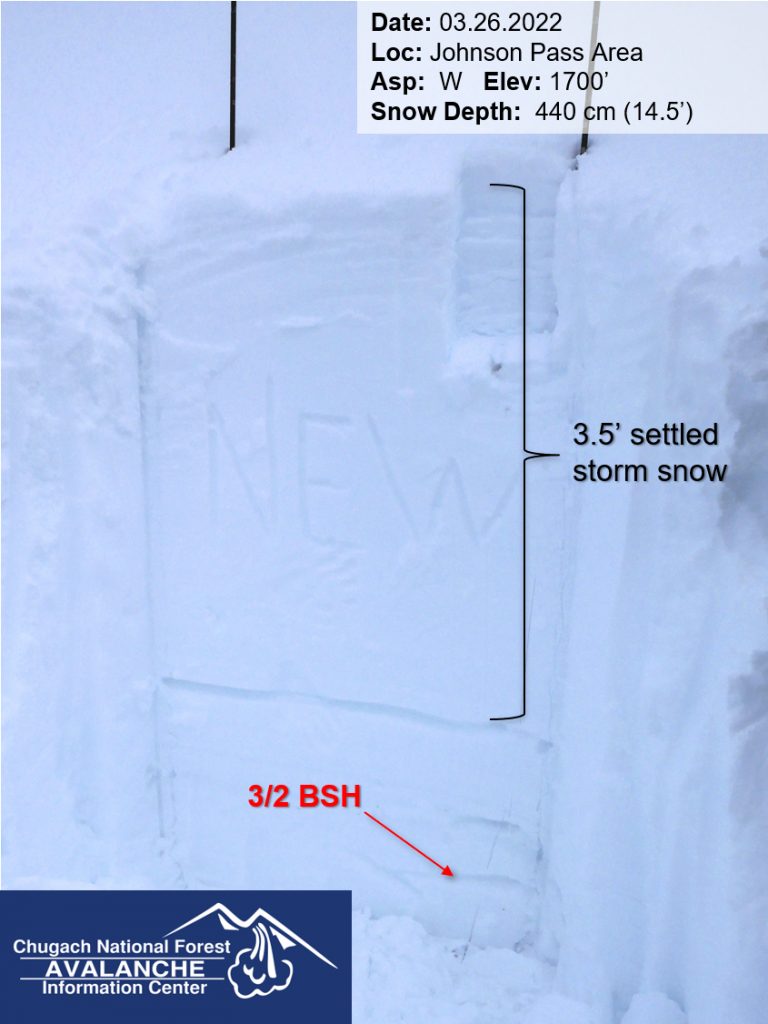 New snow that existed on the south side of Turnagain Pass (Johnson Pass area) before yesterday’s 10-16″ of additional snow. This photo also shows the deepest of the three layers of buried surface hoar (BSH), the March 2nd layer.

Yesterday:  Cloudy skies with moderate snowfall through the day was seen yesterday. The rain/snow line rose to between 1000-1500′ by late afternoon. Ridgetop winds were 30-40mph from the east with gusts into the 60’s. Snowfall diminished and winds quieted down to the 20’s mph with gusts into the 40’s overnight. Temperatures have remains in the 20’sF in the high elevations and 30’s in the lower elevations.

Today:  Mostly cloudy skies are expected with a few snow flurries here and there (a rain drop or two below 500′). There is a chance for skies to break up later today allowing the sun to poke through. Ridgetop winds should remain easterly in the 10-20mph range with gusts into the 30’s at times.

Tomorrow:  Mostly sunny skies with light northwest ridgetop winds are forecast for tomorrow. The next round of precipitation is already looking like it will move in Thursday afternoon and last through Friday.