The avalanche danger remains MODERATE at all elevations. With weak layers in the top 3 feet of the snowpack, it still remains possible to trigger a slab avalanche 1-3′ deep. Watch for wind slabs in the mid and upper elevations that could be sitting on weak snow as well as soft slabs at all elevations. Evaluate each slope separately as many show good stability while some do not.

SUMMIT LAKE/LOST LAKE/SNUG/SEWARD:  Strong northwest winds have been over this region and picked up last night. These winds may continue through midday today. Avoid slopes with recent or active wind loading. A large wind slab was triggered by a group in the Summit Lake area yesterday and wind slab avalanche concerns remain today.

Join us Saturday (tomorrow) at the Turnagain Pass motorized parking lot for a motorized demo day by longtime CNFAIC supporter Alaska Mining and Diving Supply! AMDS has provided the avalanche center with a brand new loaner Ski Doo Summit snowmachine for 9 years straight (and running)! This partnership plays a vital for getting more accurate avalanche information for motorized areas. Look for us near the AMDS trailer and bring your avalanche questions!

Two human triggered avalanches were reported yesterday. One on the northern most edge of our forecast zone and one just outside and to the south.

Berry Pass area north of Girdwood:  Skier triggered large slab avalanche in lower elevation terrain, crown around 600′ and on an easterly aspect. Skier is ok. This was reported to be up to 3′ deep in places, ~300+’ wide and running ~400′. Weak layer was facets below a crust. This is suspected to be the old January 28 crust.

Tenderfoot Ridge in Summit Lake (just to the south of the forecast zone):  Third snowboarder on slope triggered a slab avalanche around 300′ wide, 12″ deep and running ~600′. Rider was able to ride off slab and was not caught. The two members below deployed their airbags and rode away from the path, narrowly avoiding the moving debris. The slope was wind loaded and although the weak layer is unknown, it is likely this was a wind slab that sat on a buried weak layer. A big thank you to the party for writing in. See their report HERE. 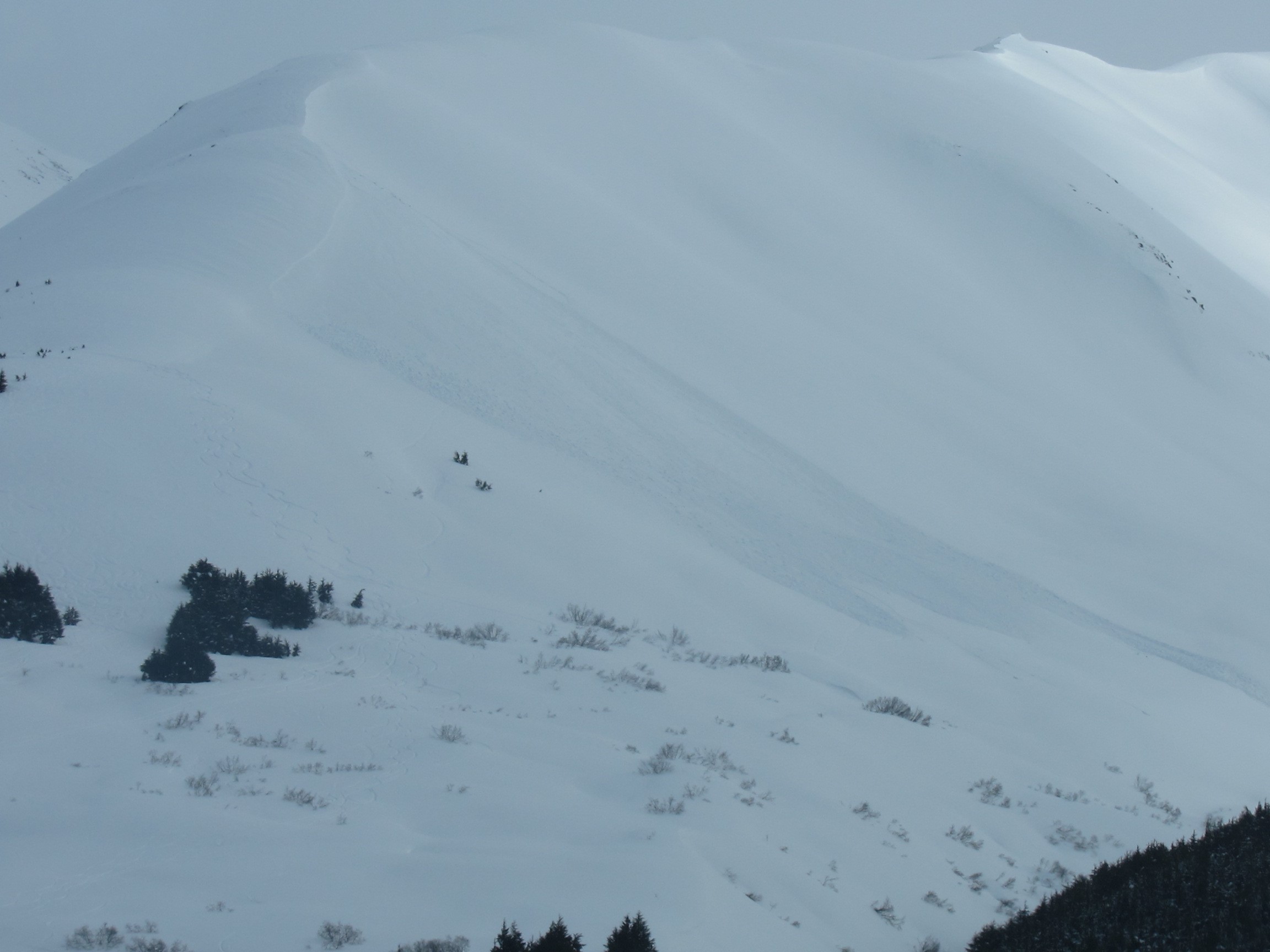 With sunshine in the forecast and the breezy northwest winds slated to decrease by noon, it could be a nice afternoon in the mountains today. Although the snowpack around Turnagain Pass itself is trending toward a LOW avalanche danger and triggering an avalanche large enough to bury a person is becoming unlikely, there are still traps out there. These traps could produce a larger avalanche and are most likely to be found in the periphery of our forecast zone to the north and to the south in the Kenai mountains. This was seen yesterday with the two human triggered avalanches. Regardless of where we travel, we need to evaluate each slope and consider the consequences if we happen to find and trigger an avalanche.

Persistent Slabs:  We know there are weak layers of buried surface hoar and facets in the top 3 feet of the snowpack. The slab above these layers has become quite loose and faceted, which is keeping it from sliding on many slopes (you can’t have a slab avalanche without a slab). It also sports a sun crust on many south slopes. However, daytime warming and wind loading can change all this and form a slab. In the lower elevations (below 1,000′), which is proving to be the most concerning, a thick layer of soft snow may be just stiff enough to act like a slab as well. These lower elevations also harbor a crust that is associated with the weak layers and can create a more tricky situation. That said, be suspect of lower elevation steep slopes.

Wind Slabs:  The ridgetop northwest winds bumped up last night and early this morning averaging around 10mph with gusts to 26mph at Sunburst. This is just enough that there could be some shallow new wind slabs in the forecast zone. To the south of the forecast zone (Summit Lake to Seward) wind slabs should be more prevalent as the winds blew stronger in that region. Keep a close eye out for any active or recent wind loading, stiff snow over softer snow and cracking in the snow around you. Wind slabs may be sitting on buried weak layers and could be larger than expected, as was the case in the Tenderfoot avalanche mentioned above.

Sluffs:  Steep slopes with a foot or so of soft surface snow (little wind effect and no sun crust) have been sluffing easily due to firmer snow underneath. As always, watch your sluff as these can be dangerous if they drag you into terrain traps like cliffs, trees, rocks, or gullies.

Sun effect:  If the winds truly die down today there could be enough solar heating to warm the surface crusts on southerly slopes. If this happens, these slopes will be ripe for wet loose avalanches and the potential for a slab avalanche that slides on that buried sun crust that sits about a foot deep.

Yesterday:  Partly cloudy skies were over the region with a cold breezy northwest wind. Ridgetop weather stations reported averages 5-10mph with gusts to 20mph. Temperatures have been holding steady in the single digits at the upper elevations while the mid elevations warmed up to the teens and lower elevations the 20’sF with daytime heating.

Today:  A sunny, but chilly, day is on tap. Temperatures sit in the single digits at all elevations this morning and daytime warming should bring lower and mid elevations into the 20’sF by the afternoon. Westerly ridgetop winds are forecast to average 10-15mph with gusts to 25 till around noon then decrease to 5-10mph.

Tomorrow:  A few clouds move in tomorrow as a low pressure skirts too far to the south to bring anything but a few flurries to an inch of snow by tomorrow night. Ridgetop winds will swing back to the east and rise to 20-30mph with stronger gusts through the day. Temperatures look to warm into the 20’sF as the east winds bring warmer air.