Today the avalanche danger is LOW and could rise to MODERATE as the sun and increasing temperatures penetrate the snowpack.  As solar heating occurs, older slabs 1′-2′ thick and moist sluffs could become easier to initiate on steep slopes.  On steep slopes protected from the sun and wind, loose snow is expected to be easily triggered.  Cornices are large in some areas and weaken with the weather expected today, so give them a wide margin.

SUMMIT LAKE to LOST LAKE and SEWARD:  Extra caution is advised. Triggering a larger slab avalanche is possible in these regions due to several layers of weak snow existing deeper in the snowpack. This area was highly impacted by strong outflow winds last week.

A wet avalanche narrowly ran past two people in the couloir near mile post 107 on the Seward Highway. This was a southerly aspect and was estimated at a vertical run of 1500′. Also, a very large avalanche was remotely triggered in Chugach State Park on Thursday. This was in the Eagle River (South Fork) area and no one was caught. Please take a look at that report HERE if headed this way.

Summer trails:  Wet loose avalanches in steep rocky terrain may begin to send debris near or over summer trails with the warm weather. Places such as the ice caves up the Byron Glacier trail sit directly in an avalanche path and are not recommended to travel to during the warm spring weather.

The weather forecast for today calls for clear sunny skies, calm to light west winds, and temperatures peaking near the freezing level at 3000′.

As the sun and increasing temperatures affect the region today, surface conditions could become less stable and also impact our sporadic persistent slab concerns found within the top 1′-2′ of the snowpack.  An observer shared images illustrating the wet/moist loose avalanche concern from yesterday afternoon.  Steep slopes on easterly, southerly, and westerly solar aspects where slopes heat up enough are the most likely spots for a person to initiate these avalanches.  If triggered, this avalanche concern is expected to be on the smaller side of the scale, but could become entrained and move a rider or skier down the fall line.  Remain aware of your surroundings and anticipate your exit strategy as the terrain dictates.

The snowpack in more remote areas could be quite different. Pay attention to signs of recent avalanches, cracking/whumpfing, wind effect, and sun effect. Also, keep in mind areas with a shallow snowpack are more likely places to find a slab that fails in the weak layer described above or other old weak snow buried in the pack. This includes the south end of Turnagain Pass, such as Twin Peaks and Silvertip to Summit Lake and over toward Palmer Creek and the Raggedtop area near Girdwood. 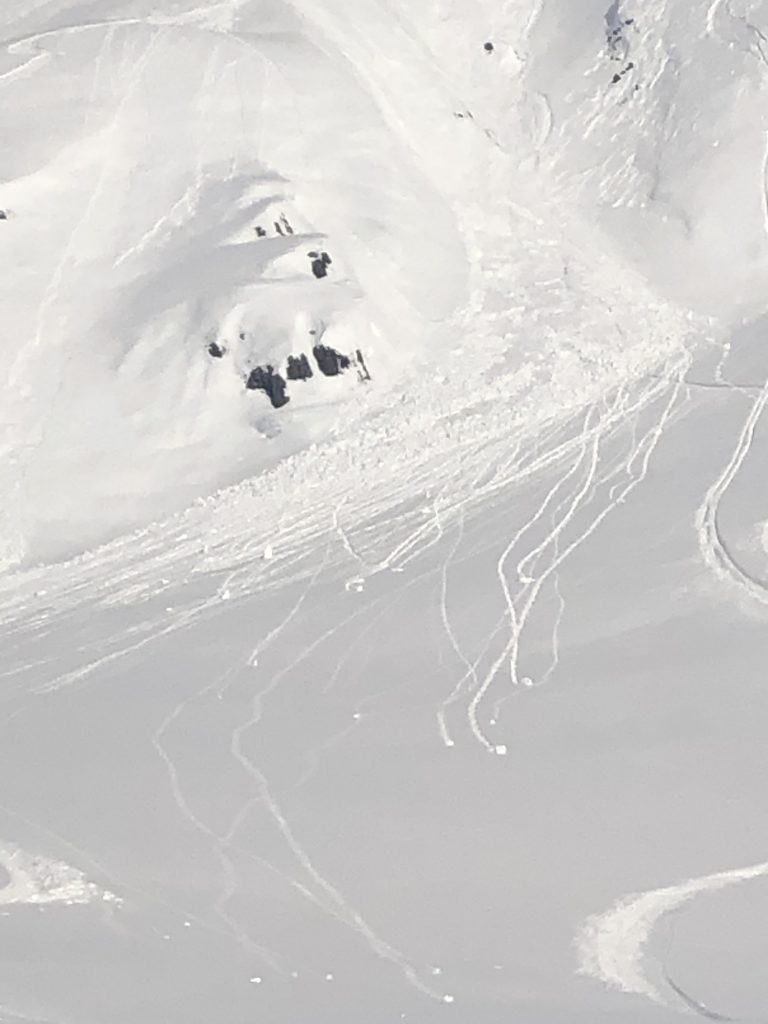 Loose snow:  Loose dry snow still exists in many areas, especially on northerly aspects.  On steep slopes where this is the case, sluff could be easy for a human to initiate and could move down slope with enough volume to take a person off their feet.

Cornices:  We have some large cornice formation in many areas.  As the sun and increased temperatures beat down, it could become easier to trigger these.  As usual, it’s prudent to give cornices a wide berth and limit your time beneath them.

Yesterday:  Sunny skies with light ridgetop winds from the west. Temperatures warmed to the mid 20’s°F along ridgetops and 30°F at the lower elevations.

Today:  More clear skies and sun! West winds are expected to be calm to light with temperatures just above freezing at sea level and 24°F-30°F at 3000′.

Tomorrow: More sun during the day with a high near 34°F at sea level. West winds are expected around 5 mph.  In the evening, winds are expected to shift becoming southwest as clouds increase to set up Tuesday for possible precipitation.