The avalanche danger remains MODERATE for triggering a slab avalanche 1-2′ thick. These are most likely to be found on the steeper slopes and could be old wind slabs or simply soft slabs that are sitting on weak facets or buried surface hoar. Slopes seeing strong solar heating are more likely to be triggered. Easily triggered dry sluffs on steep shaded slopes and moist sluffs on steep southerly slopes should be expected.

SUMMIT LAKE to LOST LAKE and SEWARD:  Extra caution is advised. Triggering a larger slab avalanche is possible in these regions due to several layers of weak snow existing deeper in the snowpack. This area was highly impacted by strong outflow winds last week.

Hatcher Pass area:  Many large avalanches have occurred over the past several days. Be sure to check the Hatcher Pass Avalanche Center’s forecast.

A very large avalanche was remotely triggered in Chugach State Park on Thursday. This was in the Eagle River (South Fork) area and no one was caught. Please take a look at that report HERE if headed this way.

Summer trails:  Wet loose avalanches in steep rocky terrain may begin to send debris near or over summer trails with the warm weekend weather. Places such as the ice caves up the Byron Glacier trail sit directly in an avalanche path and are not recommended to travel to during the warm spring weather.

High volume human triggered sluffs were reported yesterday in areas at Turnagain Pass that were spared the wind damage from last week. These were on steep shaded slopes with very loose surface snow as well as steep southerly slopes in the heat of the day.

Although valley bottom temperatures are chilly again this morning, they should heat up to the 30’s°F today with direct sunshine. Springtime! Along the ridgetops, temperatures are much warmer (in the 20’s°F this morning) and should increase several degrees. A light westerly breeze may keep the snow surface from heating up too much, but I’m guessing there will be slopes out of wind, in the sun, and feeling the heat.

As the days go by, we continue to assess a weak layer of snow that sits just 1-2 feet below the surface. This is composed of buried surface hoar and/or small facets. A lack of avalanche activity for the past several days, unremarkable pit results and observations from others all point to this layer becoming more stubborn to trigger. However, it can’t be written off, especially with warming temperatures and direct sun in the Alpine (this can do unexpected things in the spring).

Sun effect:  Keep an eye out for the slopes that are warming and moistening the snow surface. Moist/wet sluffs are notorious for being ‘heavier’ and larger than expected and can easily knock someone off their feet and plow down to the valley bottom. As mentioned above, a warming slope can cause a weak layer to be more reactive and slab avalanche likelihood increases.

As folks travel to more remote areas, remember the snowpack could be quite different. Paying attention to signs of recent avalanches, cracking/whumpfing, wind effect, and sun effect are all key. Also, keep in mind areas with a shallow snowpack are more likely places to find a slab that fails in the weak layer described above or other old weak snow buried in the pack. This includes the south end of Turnagain Pass, such as Twin Peaks and Silvertip to Summit Lake and over toward Palmer Creek and the Raggedtop area near Girdwood. 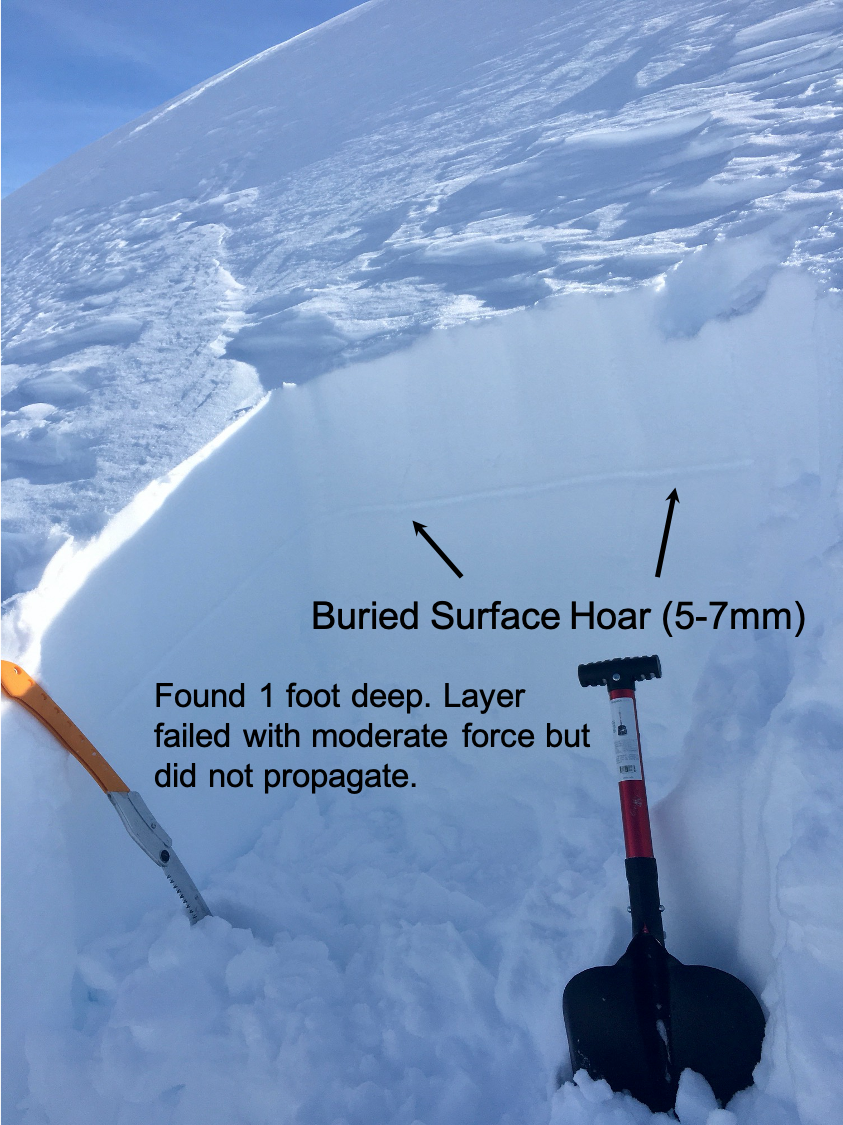 We found this layer of buried surface hoar a foot deep at 3,000′ on Seattle Ridge. Although we could get it to fail, it did not want to propagate, which is a sign the layer is less likely to produce an avalanche.

Cornices:  Avoid travel on cornices and move quickly underneath them. Remember, warming temperatures and direct sun are classic mechanisms for destabilizing these monsters.

Dry loose snow avalanches:  In shaded areas that were protected from the wind, the snowpack is faceting significantly and dry sluffs are becoming larger. 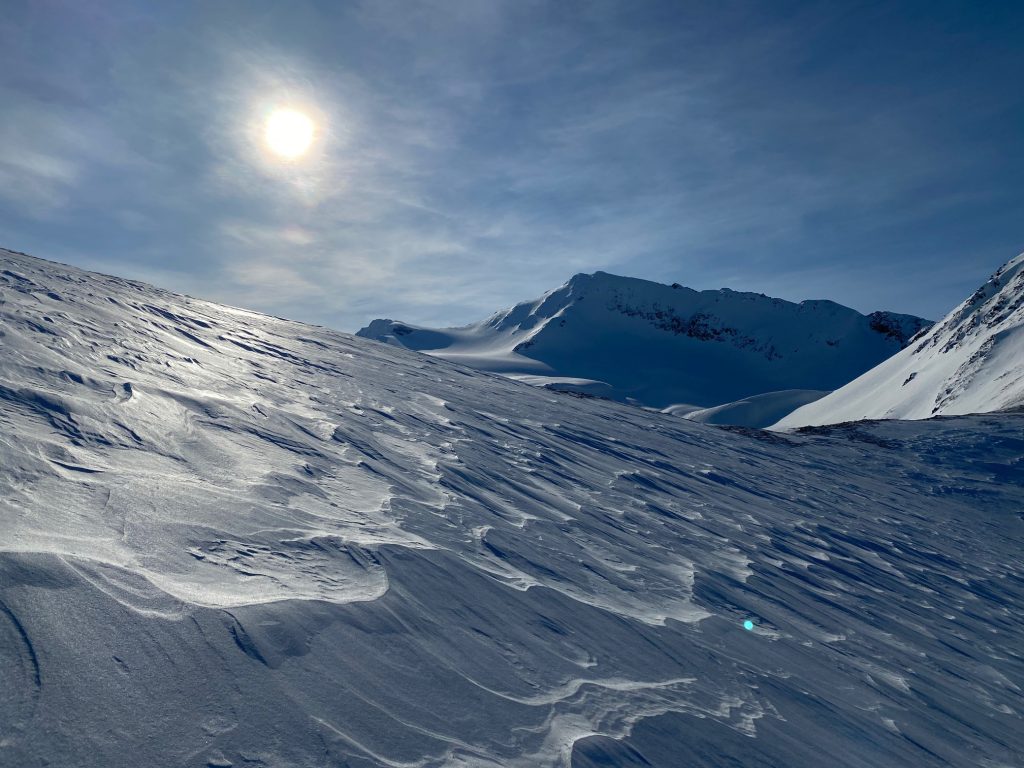 Yesterday:  Sunny skies with some very thin high clouds at times. Ridgetop winds were light from the west (around 5mph). Temperatures warmed to the mid 20’s°F along ridgetops and 30°F at the lower elevations. Valley bottoms are back to the single digits this morning while ridetops remain in the 20°F.

Today:  Another brilliant sunny day is on tap. Again ridgetop winds should be light, 5-10mph, from the west. Temperatures are forecast to be even warmer today as the high pressure spinning over us continues to bring in warm air aloft. Ridgetop temps may hit the upper 20’s°F and lower elevations the mid 30’s°F.

Tomorrow:  Sunny skies, light west winds and temperatures nearing 30°F along the lower ridgetops are forecast for Sunday and Monday. A warm low-pressure front moves in on Tuesday, which will bring a chance for rain to 1,000′ and snow above. Precip amounts look to be small, in the .25″ for rain and just a few inches of snow in the higher terrain.