The avalanche danger is MODERATE above 1000′. It is possible a person can trigger an avalanche 1-2′ deep on a weak layer of buried surface hoar that is present throughout the advisory area. The layer was buried 11 days ago, but with two near-misses involving human-triggered avalanches in the past two days, it is clearly still cause for concern. Choose your terrain carefully today, avoiding steep, consequential slopes. The danger is LOW below 1000′, where the main concern will be wet loose avalanches as the snow surface heats up later in the day.

Last night we received anonymous information on two human triggered avalanches in the Turnagain Pass area, one of which occurred yesterday, and the other on Friday:

Tincan Proper: A skier triggered a slab avalanche on the north-facing terrain of Tincan Proper. The avalanche was roughly 100′ wide, 6″ deep, and ran 2000′ down to the valley. The skier was able to dig in to the bed surface, self-arresting before getting taken for a very long ride. The skier that triggered the avalanche was the fourth set of tracks on the slope. We suspect this avalanche failed on the 3/2 weak layer we have been talking about.

South end of Turnagain Pass: A skier triggered a large avalanche that was 18″ deep, 200′ wide, and ran about 600′ vertical on a northwest aspect at around 3500′ elevation. The skier was caught and carried, but was uninjured. The avalanche failed on the 3/2 surface hoar. The person that shared the info noted ‘surface hoar can really propagate and release on low angle slopes’. They measured slope angles in the mid 30’s at the crown, but the slab released out onto slopes as shallow as 30 degrees. This was a hard slab avalanche, and the skier that triggered it was the fourth person on the slope. The group had previously dug multiple test pits and hand pits as they ascended, and did not clearly identify the weak layer until the slope avalanched.

The Library: There were multiple small slabs that were triggered by wet loose avalanches in the steep south-facing terrain in the Library. These avalanches were all natural and did not involve any people. More info in this observation. 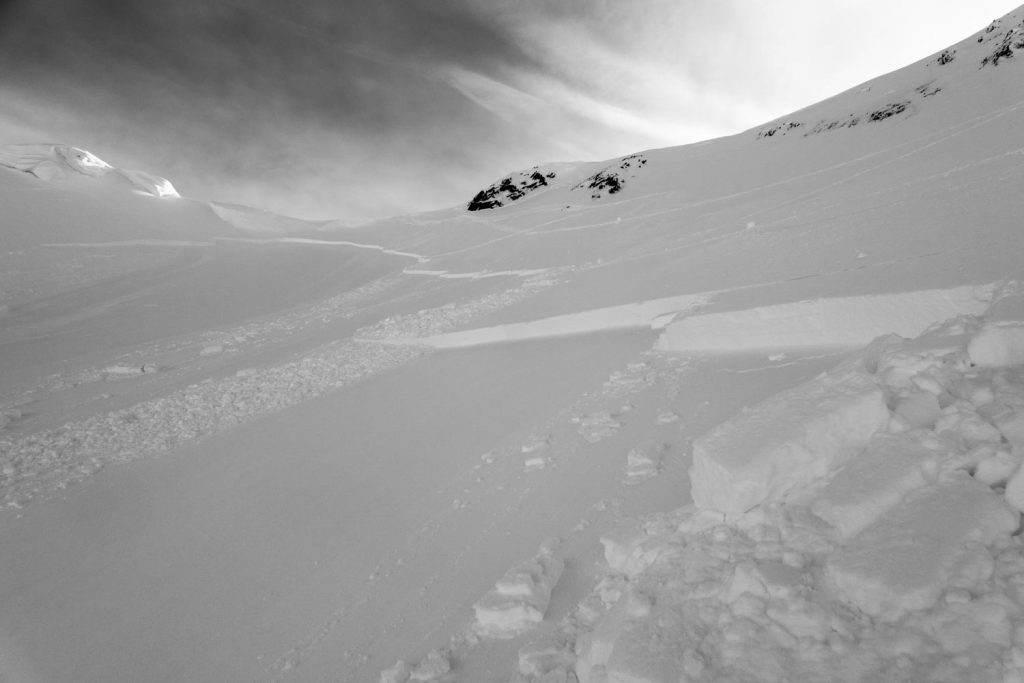 Looking up at the crown of the skier-triggered hard slab on the south end of Turnagain Pass. Photo shared anonymously. 03.12.2022 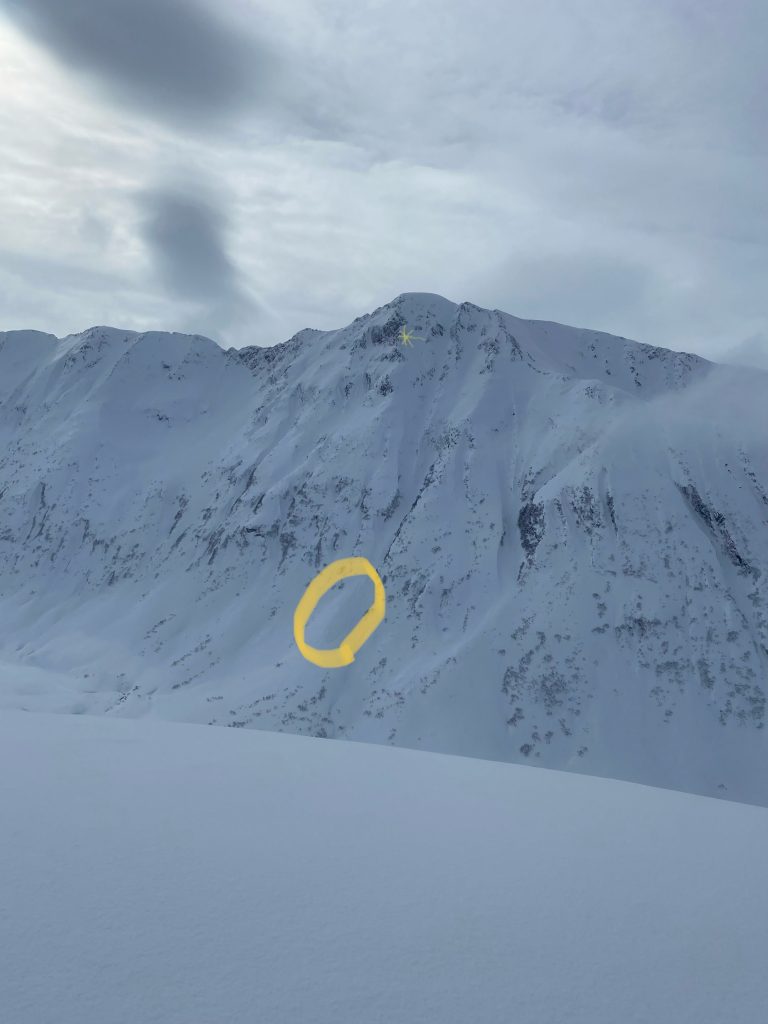 Marked-up photo indicating the start zone and the debris from the skier-triggered avalanche on the north side of Tincan Proper. Submitted anonymously. 03.11.2022

It has been 11 days since a layer of surface hoar and near-surface facets was buried, and it is still showing us that it is cause for concern. With two near-misses in the past two days, it is clearly still possible to trigger avalanches on this layer. The layer is buried 6″ to 2′ deep, and is covered by a hard slab in a lot of places. This has made it possible for several people to travel on a slope before somebody triggers an avalanche. It also makes it possible to venture out into the middle of a slab before triggering an avalanche, making it more difficult to avoid getting caught in the avalanche if the slope releases.

The layer may be challenging to identify in snow pits. It appears to have a somewhat spotty distribution, with some dangerous slopes right next to other stable slopes. This makes it really hard to reliably assess the stability, and has caught very experienced people off guard. So how do you manage a problem like this? To avoid the problem entirely, you can just stick to low angle slopes. With the current set up, we mean really low angles- less than 30 degrees. If you are willing to take on a little more risk and push into steeper terrain, do so carefully. Seek out as much feedback as possible before you get on something steep, and use any red flag (shooting cracks, collapsing, fresh avalanches, poor stability tests) as a sign to step back. Start small, and avoid slopes with terrain features that would increase the consequences of getting caught in an avalanche– things like cliffs, rocks, trees, and gullies. Be smart with how you travel as well– only exposing one person at a time to avalanche terrain and keeping a close eye on your partners from safe spots out of the runout zone.

Wind Slabs: With two days of light winds and another relatively calm day on tap, it is unlikely we will see fresh wind slabs forming. This doesn’t mean they aren’t out there, so be sure to keep them in mind in the typical suspect terrain- steep slopes near ridgelines, convex rolls, and gullies.

Wet Loose: It is likely we will see more natural and human-triggered wet loose avalanches as slopes heat up during the day today, especially on solar aspects. These may have a thin crust on the surface in the morning, and will start forming rollerballs as they begin to heat up, eventually becoming warm enough to make loose wet avalanches. In some places these wet loose avalanches may pull out slightly larger slab avalanches (check out this observation from yesterday for a good example). Be aware of changing conditions as things heat up.

Cornices: These will also be heating up through the day, which may cause some to fail naturally. As always, limit the amount of time you spend under them, and give them plenty of space while traveling along ridgelines.

Glide Cracks: We are continuing to monitor the glide crack development through the area. There are fresh cracks opening up on Seattle Ridge, Wolverine, Eddie’s, and Tincan. So far we haven’t seen any release, but it is always a good idea to limit travel below them. They are large, destructive, and unpredictable. 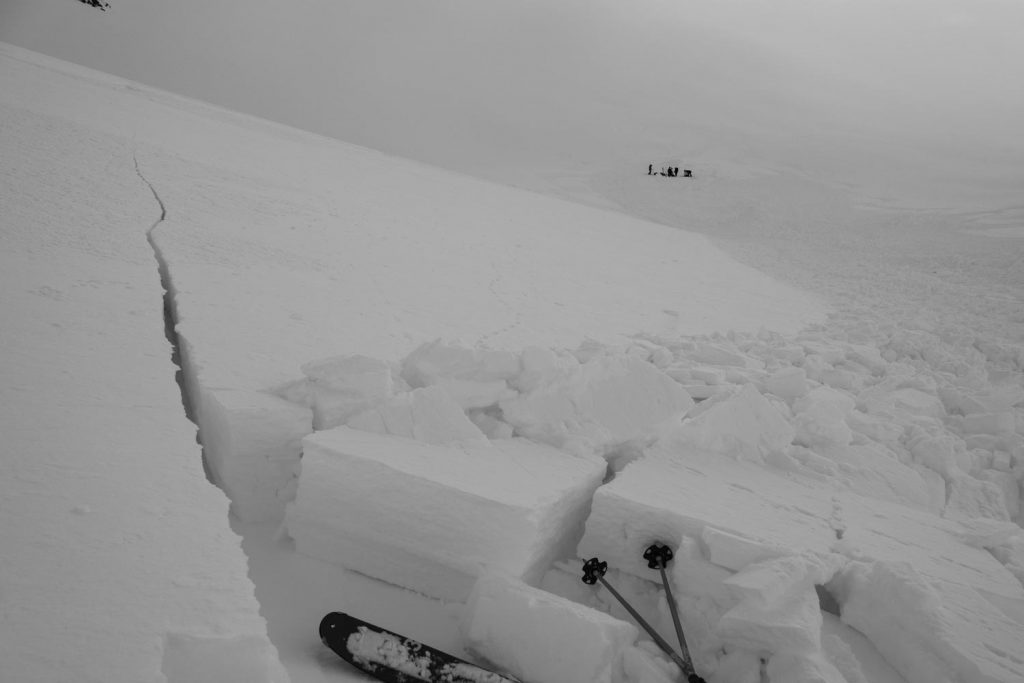 Looking down at the debris of a hard slab avalanche that failed on a layer of surface hoar buried about 18″ deep. Photo submitted anonymously. 03.12.2022 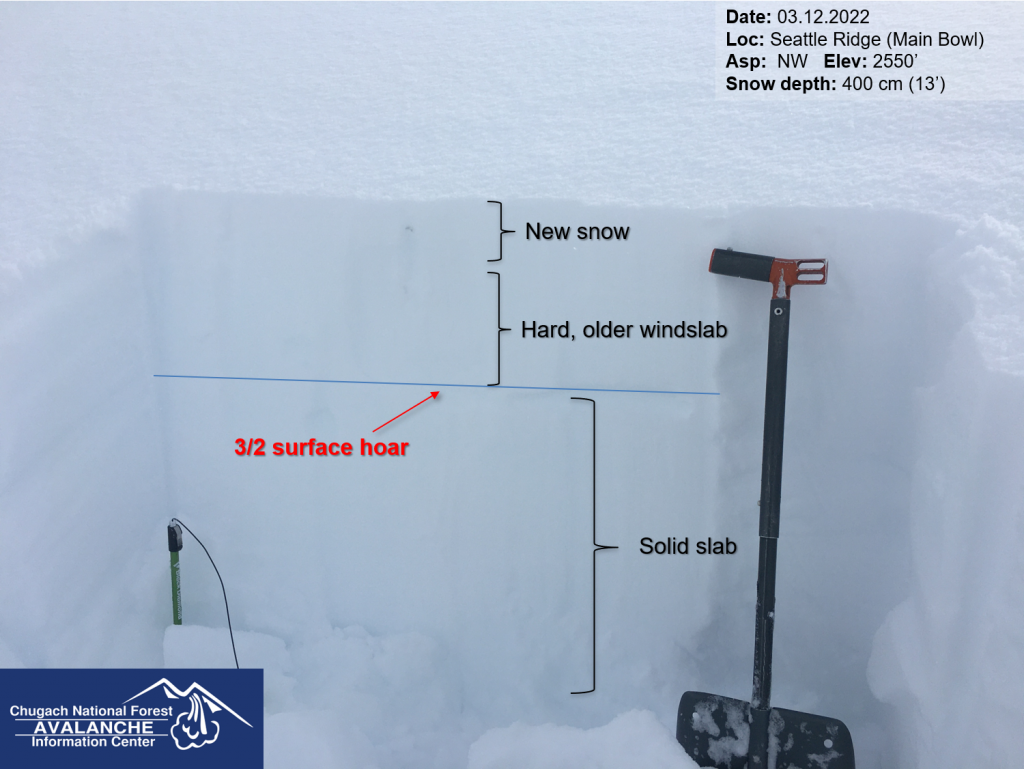 Typical setup on shaded aspects on Seattle Ridge. This snowpit was dug right next to the crown of an avalanche that released last Sunday, and did not show any propagating results in stability tests yesterday. 03.12.2022

Yesterday: Skies were partly cloudy, with some areas seeing quite a bit of sunshine. Winds were light out of the east at around 5 mph with gusts of 10-15 mph. Light snowfall in the morning did not amount to any measurable precipitation. High temperatures reached the upper 20’s to upper 30’s F, and overnight lows were in the upper teens to upper 20’s F.

Today: We are looking at another pleasant day, with light northeasterly winds at 5-10 mph and gusts of 10-15 mph. Skies will once again be partly cloudy, and high temperatures will reach the mid 20’s to low 30’s F. Most of the advisory area will be dry, but the Portage and Placer zones may see a trace to 3″ of snow during the day. Skies should clear overnight, allowing temperatures to drop down to the mid to upper teens F.

Tomorrow: It’s gonna be a bright sunshiny day tomorrow, as Jimmy Cliff would say. Clouds should clear out tonight, with mostly sunny skies during the day tomorrow. Winds will be light out of the west at 5-10 mph and no precipitation is expected. It is looking like the weather will remain quiet through Tuesday before things start picking up again with heavy snow possible Wednesday-Friday. Stay tuned for more.