Center Ridge to the pocket glacier below Kickstep, to 3500′

Several wet loose avalanches that initiated below rocks starting mid run on the eastern end of the Library. At least twice these small slides stepped down mid slope - see photo below - with crowns that averaged 12-18" deep, producing D1.5 avalanches. Extensive rollerballin' along the entirety of the library and south aspect of Tincan Proper.

On the ridge connecting the library and kickstep, a cornice fall triggered a slide on a SW aspect - see photo below.

A larger avalanche back off the peaks that extend from Center Ridge - potentially 1+ week old - was covered by recent snow, pictured below.

Gliding into mid-March: A new glide crack on Wolverine, SW aspect, near treeline on the end of the south ridge closest to the road. Two glides on SW aspect of Eddies were larger today than when observed Thursday. Uptrack glides: The newer of the two reported in February is now the bigger one, with some dirt showing... finally, one small glide appeared to be opening in the library, ~2500' in elevation; several others were in the vicinity but were covered by recent snow. Same goes with the glide previously reported on Tincan Proper last month... it doesn't look too larger than a few weeks ago.

Finally, a section of cornice around 3000' on a ridge extending up towards kickstep - still 4 finger soft - would break off in chunks 3-5' in front of ski tips with a moderate amount of force from the skis. These blocks ranged in depth from 6" - 18" pictured below.

Broken skies transitioning to scattered clouds back by kickstep; sunnier back by Kickstep versus the highway corridor.
The sun felt strong, but temps in the 20s up high, 30s down low. Occasional light variable winds.

A trace of new snow overnight sat on a variety of surfaces, including:

Highway to 1500': Thick crust - 3" thick at the highway, diminishing with elevation, over moist snow. This crust was fully supportable but softer in treed areas in the AM. By late afternoon, the crust was semi supportable with a wet surface.

1500 - 2000' Southerlies: This supportable crust was a little softer than what we found below 1500' in the AM - slightly breakable on non-due southerlies - over moist snow. It became breakable and super annoying in the afternoon, moist with a wet surface on steeper slopes.

1500 - 2000' Flats/Northerlies/Tree Shaded Areas: A 1-2cm thick but fragile melt freeze layer was present on the surface, and it's size/strength was directly related to the amount of sun the spot gets. The snow was dry - crust and below the crust - even at the end of the day.

Above 2000', breakable crusts could be found up to 2500' on steeper NW aspects that get some sun at the end of the day, and up to our high point of 3500' on aspects facing south. Only steeper southerlies had a moist surface by the end of the day; otherwise the surface was dry. Given recent avalanche activity, it was pretty clear that yesterday's warming event/sun influenced the snow much more than today's weather.

Finally, there's a stout surface crust with ~1mm facets below it along much of Tincan Creek; probing at one such spot revealed a HS of 140cm, indicating a lot of prior wind affect - including recently - for this valley!

Shallow pit results/structure for the center of the pocket glacier below Kickstep is below. Hand pit results - dug fairly often above 2500' - were consistent with the pit results. 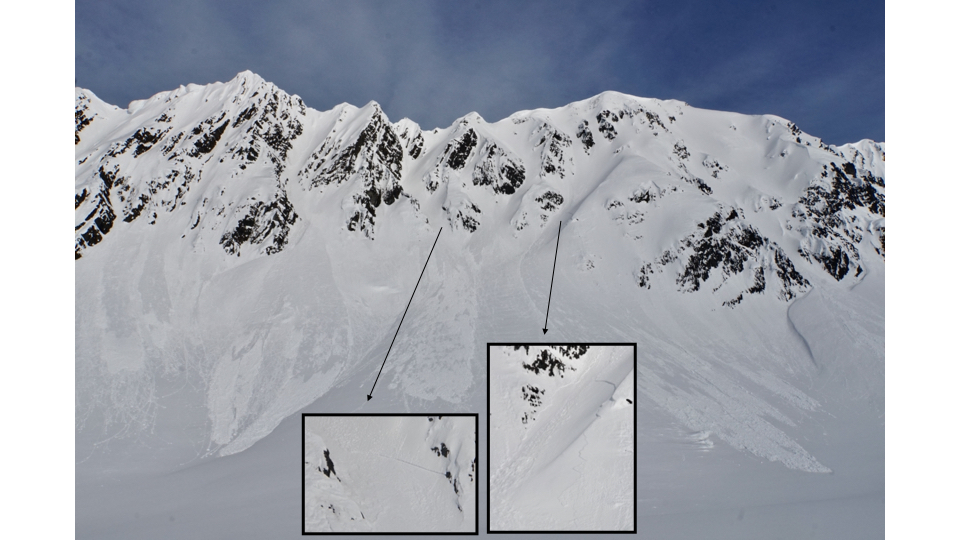 Recent avalanches - guessing yesterday - on the eastern end of the library, including two that stepped down. Also note the extensive rollerballs, which were present across the entirety of the library. 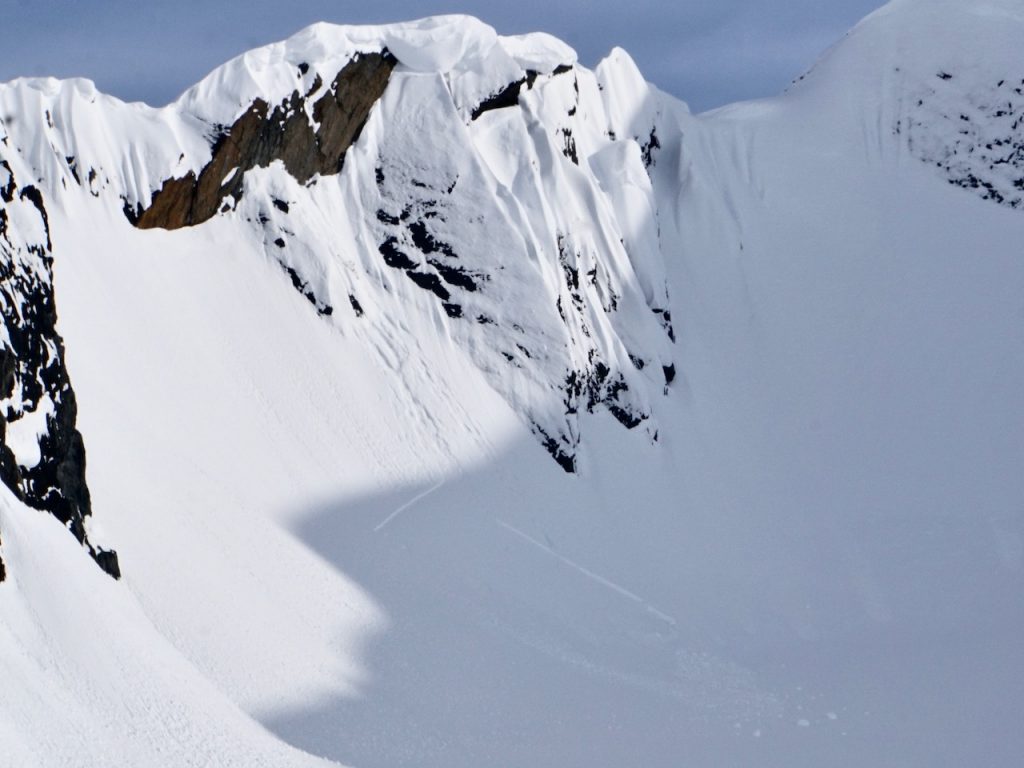 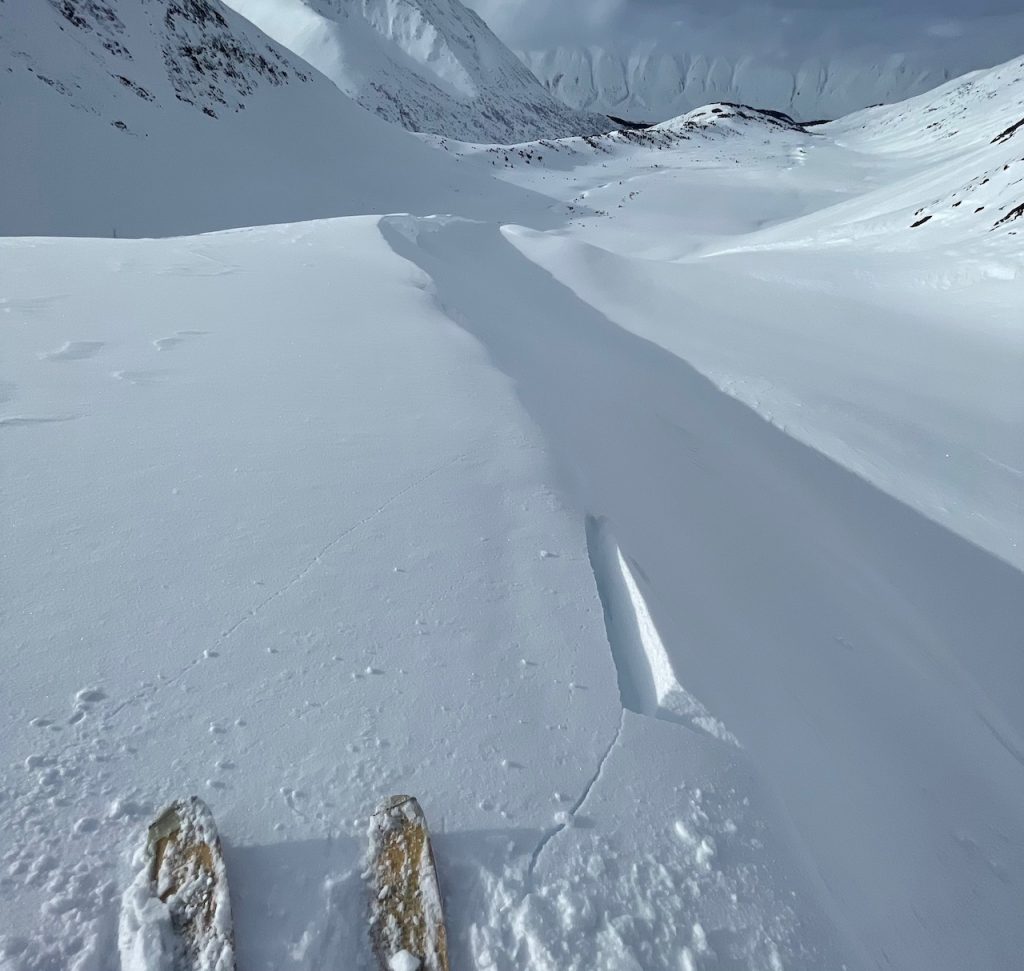 This cornice feature - 4 finger hard - was somewhat sensitive, cracking in front of skis 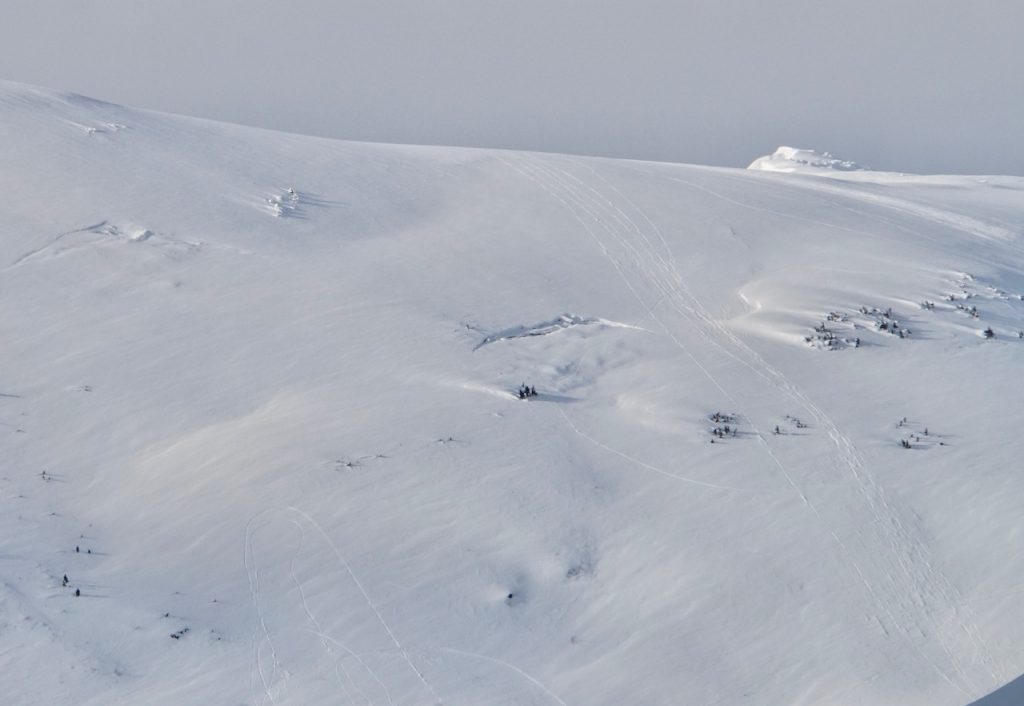 The main two Seattle Ridge uptrack vicinity glides; a smaller, new one under trees to lookers right is not pictured. 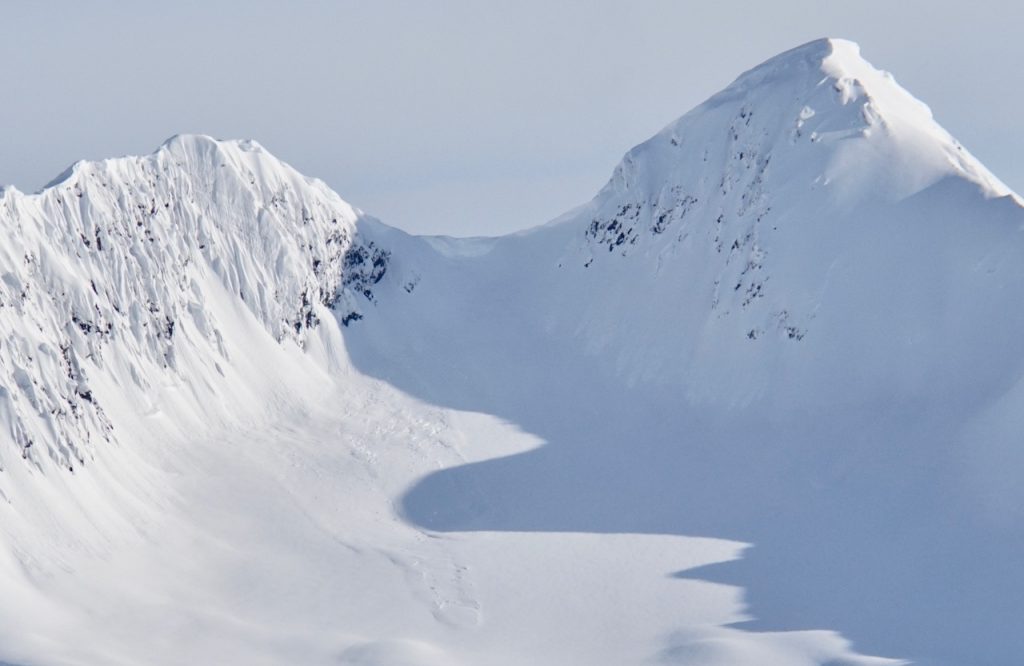 A large older avalanche off the far ridgeline that extends from Center Ridge towards Pastoral. 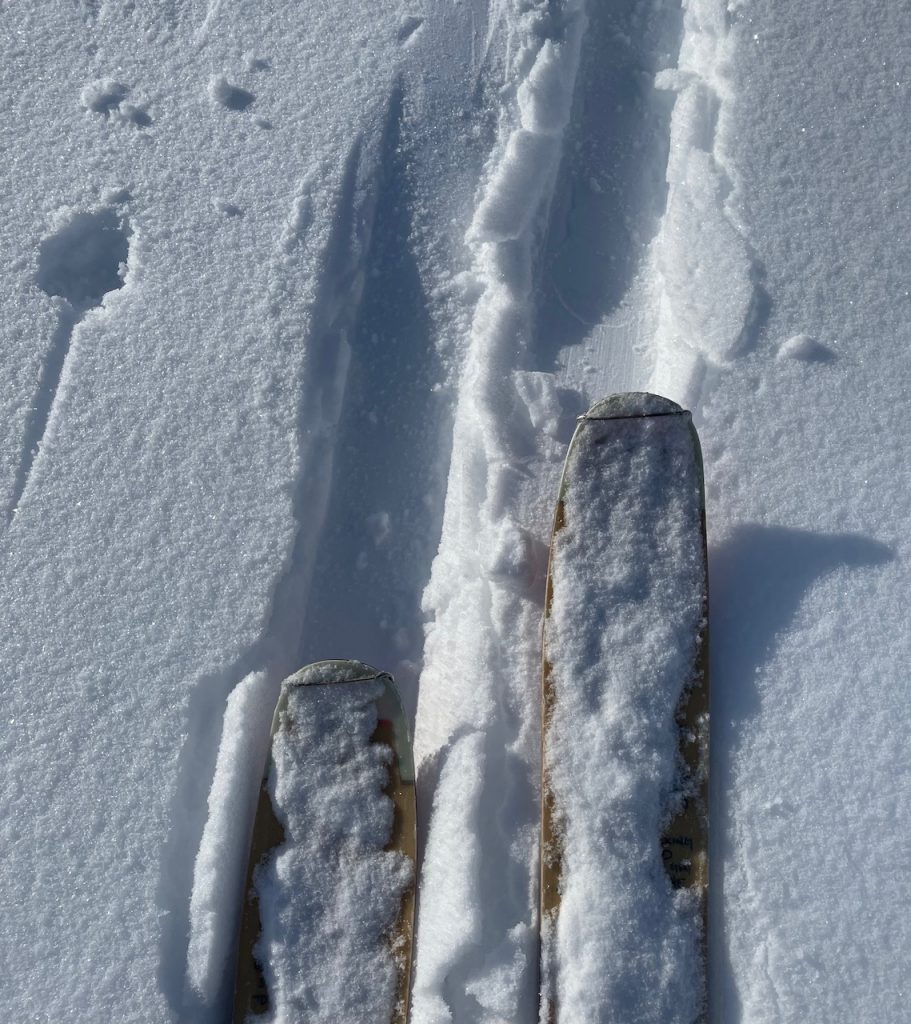 Even the northerlies were feeling a little crusty below 2000' - this photo was taken on a low angle north aspect where the crust was breakable. 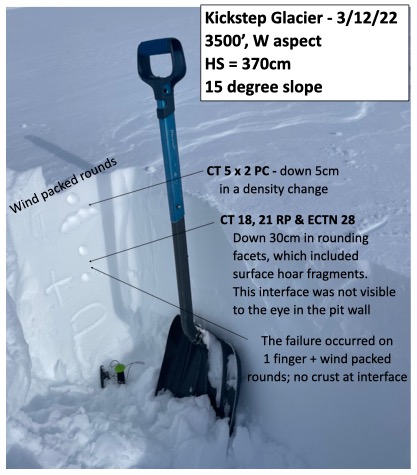 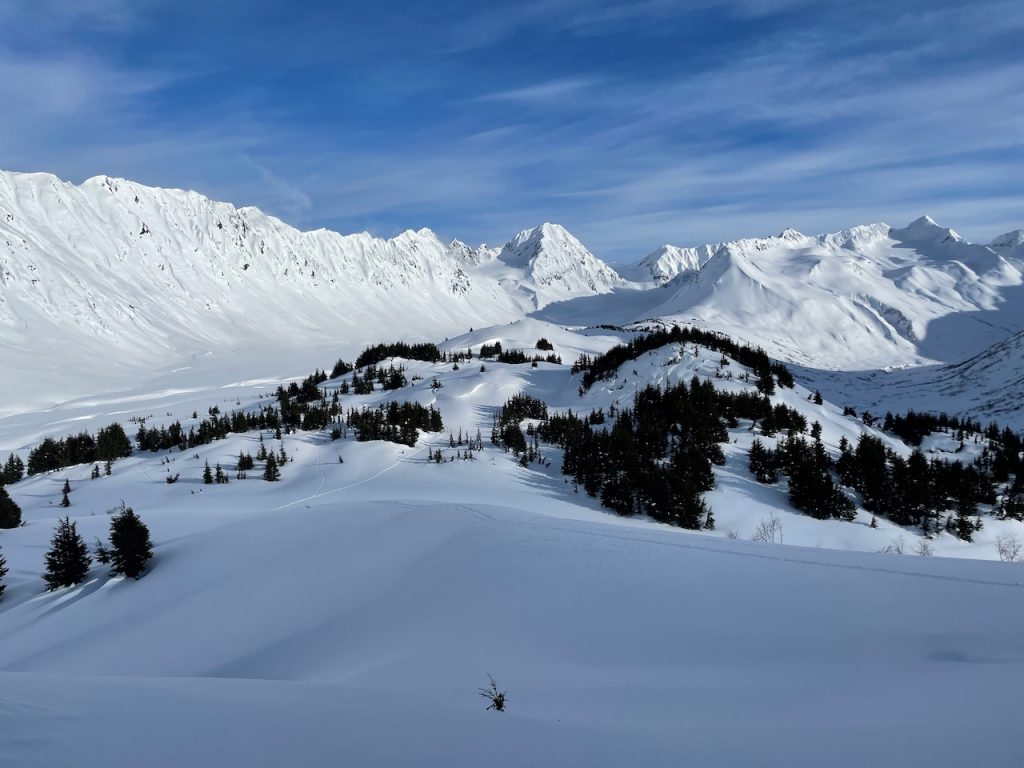 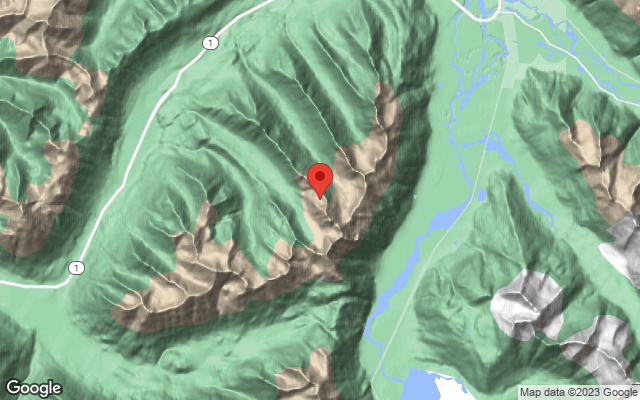