The avalanche danger is MODERATE above 1000′ today. Lingering wind slabs up to 2′ deep from strong winds this week are possible for a person to trigger. Steeper terrain along ridgelines, wind loaded gullies, and convex rollovers are common features that could harbor lingering wind slabs. Below 1000′ the avalanche danger is LOW. Wet snow and rain overnight created the potential for wet loose avalanches at lower elevations.

SUMMIT LAKE: New snowfall overnight with potential for wind transport at upper elevations could lead to increased avalanche danger. Compared to the Turnagain Pass forecast area, Summit Lake has a much weaker snowpack and it is much more likely for a person to trigger an avalanche on a buried weak layer.

The winds that impacted the forecast area from both east and west this week have died down for the weekend and light snowfall moved into the area with 2-4″ of new snow overnight. The SW flow associated with the current low pressure system should favor Anchorage and Hatcher Pass for snowfall for the remainder of the weekend. The primary avalanche problem is lingering wind slabs up to 2′ deep. These could exist on a variety of aspects due to wind events from multiple directions this week but the most recent winds from yesterday, which gusted into the 40 mph range at ridgetops, were out of the east.

Visibility may be the biggest challenge this weekend depending on whether the clouds move out this afternoon and into tomorrow. With the lack of visibility yesterday we don’t have much information about how reactive wind slabs were in alpine areas so it is worthwhile to approach avalanche terrain cautiously today until you can assess the potential for human triggered avalanches on wind loaded features. Common areas that could harbor lingering wind slabs are in steeper terrain along ridgelines, cross loaded gullies, and convex rollovers.

Yesterday in the Upper Crow Creek area we found a weak layer of buried facets from November on top of the Halloween crust (see ob here) which was able propagate a fracture in our snow pit tests. This is the same layer that failed in a recent human triggered avalanche in Summit Lake (ob here) and was responsible for large widespread avalanches back in late November into mid December. This weak layer seems to only be an issue in areas with a shallow overall snowpack where the facets are still relatively close to the surface (about 3′ down in our pits yesterday). It is unlikely that a person could trigger an avalanche on this layer in our forecast area because of the overall stronger and deeper snowpack compared to Summit Lake, but it is worth evaluating if you are travelling in an area with a shallow snowpack.

Cornices: With all the winds this week cornices could be touchy if you get into the alpine today. One report of a natural cornice fall in Upper Virgin Creek behind Alyeska yesterday (ob here) is a good reminder to be cautious travelling underneath cornices and give them a wide berth along ridgelines. 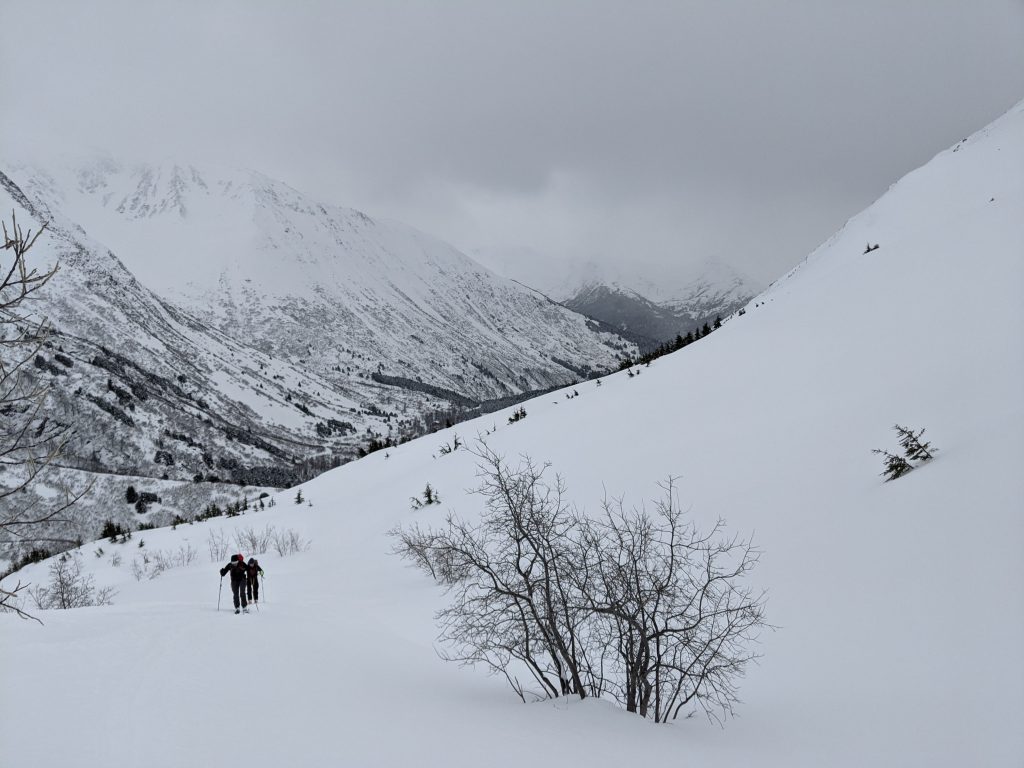 Clouds lingering at ridgetop level yesterday created flat light in alpine areas, which could be the case for this weekend as a low pressure lingers in the area without providing much snowfall to the forecast zone. Photo 2.11.22 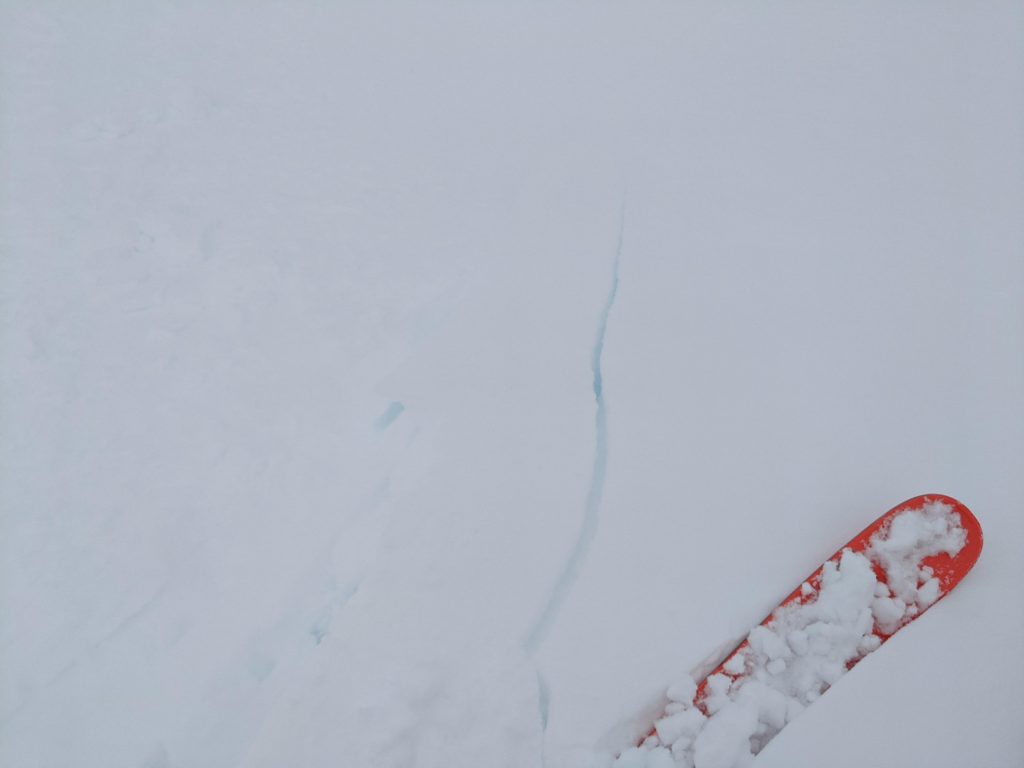 Discussion of snowpack structure in Upper Crow Creek that has us thinking about those November facets again. 2.11.22

Yesterday: Moderate to strong winds at upper elevations with obscured cloud cover and periods of light snow during the day. Overnight snowfall of 1-4″ with rain below 400′. Winds started to taper off overnight and stayed consistently out of the E.

Today: An additional 2-4″ of snowfall is possible today with snow line at 600′. Within our forecast area weather models are favoring Girdwood for precipitation today, however Hatcher Pass and Anchorage should get more snow out of this SW flow than our region. Winds should be light at 0 to 15 mph out of the SW throughout the day. Cloud cover looks pretty dense in the morning but may decrease slightly in the afternoon.

Tomorrow: Our forecast area looks like it will miss most of the snowfall tomorrow, with the possible exception of areas in the upper Girdwood valley, which could see and additional 1-3″ of accumulation. Winds remain light out of the S and cloud cover decreases but low clouds should remain in the area.