The avalanche danger remains MODERATE today above 1000’. Triggering a slab avalanche on a layer of weak snow, buried 1-2’ deep, is still possible in steep wind-loaded terrain. Assess the snowpack as you travel, identify areas of concern and evaluate terrain consequences. Give cornices a wide berth, limit time spent under glide cracks and watch your sluff.

While some enjoyed watching the Super Bowl yesterday others enjoyed skiing Super Bowl… and skiing and snowmachining many locations throughout the forecast area. There were no reports of human triggered avalanches but observers noted variable surface conditions from the wind event on Saturday.  Some terrain was completely spared, soft and fun, while other slopes had stiff breakable wind crust and hollow-sounding wind slabs. With another day of sunshine on tap, determining where the stiff slabs linger over weak snow will be the key to avoiding our current avalanche issue. If you follow the forecast consistently our messaging might be sounding like a bit of a broken record. This the nature of a persistent slab issue. Because there is weak snow (surface hoar and near surface facets) buried under the wind affected snow, the potential to trigger an avalanche won’t quickly heal up. Over time the cold clear weather can help slowly facet away the slab and ease tension. However, steep slopes with wind affected snow should be still be approached with caution today.  Slabs may be found near ridges, on wind-loaded slopes and in cross-loaded gullies. Watch for cracks shooting out from your snowmachine or skis, smooth rounded pillows of snow, and ‘punchy’ feeling stiff snow over weaker snow. Even shallow slabs can be quite dangerous in high consequence terrain and hard wind slabs may break above you as you travel out onto the slope. Look for signs of signs of wind effect and choose terrain carefully.

Loose Snow Avalanches (Sluffs): Continued cold and clear weather is keeping the surface snow dry and loose in areas that have been sheltered from the wind. Be aware of fast-moving and high-volume sluffs in steep terrain, especially if you are traveling near terrain traps like cliffs, rocks, trees, or gullies. Check out this observation from a week ago in the Library.

Cornices: When traveling along ridgelines be sure to give cornices plenty of space, and minimize the amount of time spent traveling below them. Cornices could fail under the weight of a person on skis or a snowmachine, and might trigger an avalanche if the slope below is wind-loaded. Also be aware that cracks have opened up along some ridgelines where the large cornices are peeling away. 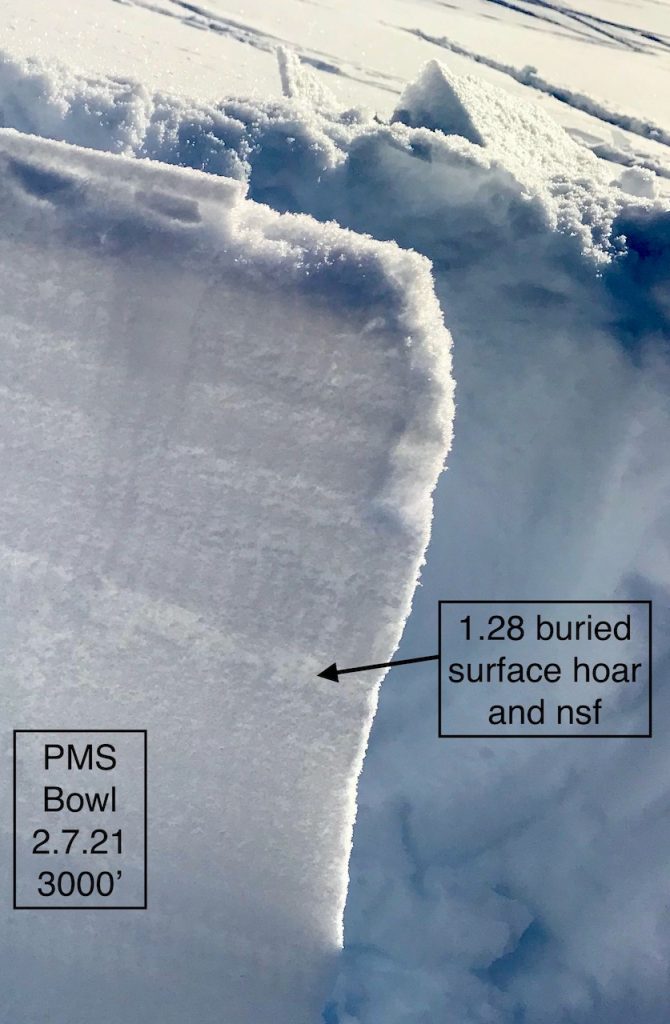 Buried surface hoar and near surface facets, 2.7.21. Terrain that harbors a stiff slab of wind affected snow over this set-up is suspect today. 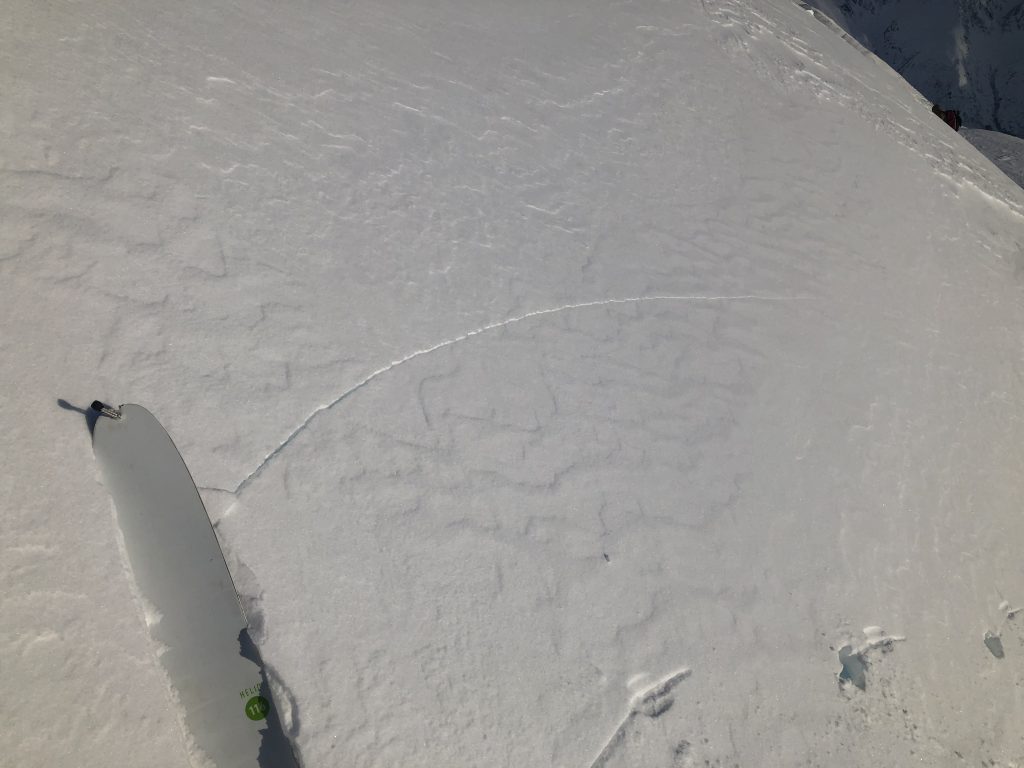 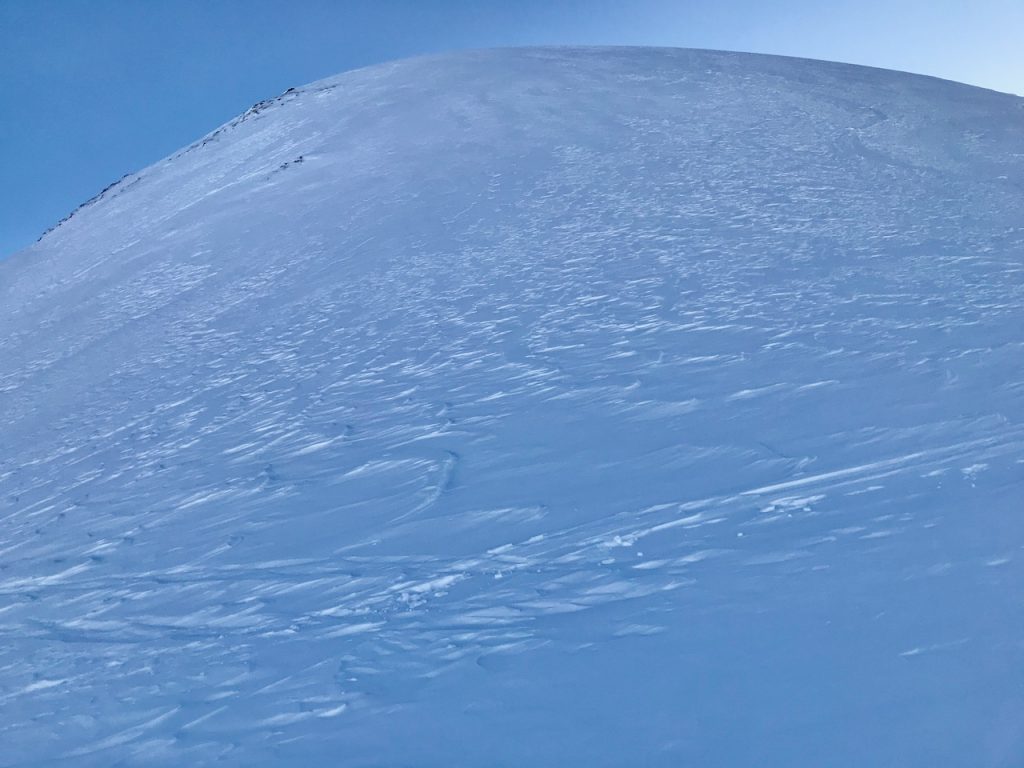 Glide cracks continue to open up throughout the area. These cracks could release at any time and be very destructive. Avoid spending time below glide cracks. If you see any new glide activity, please let us know here. 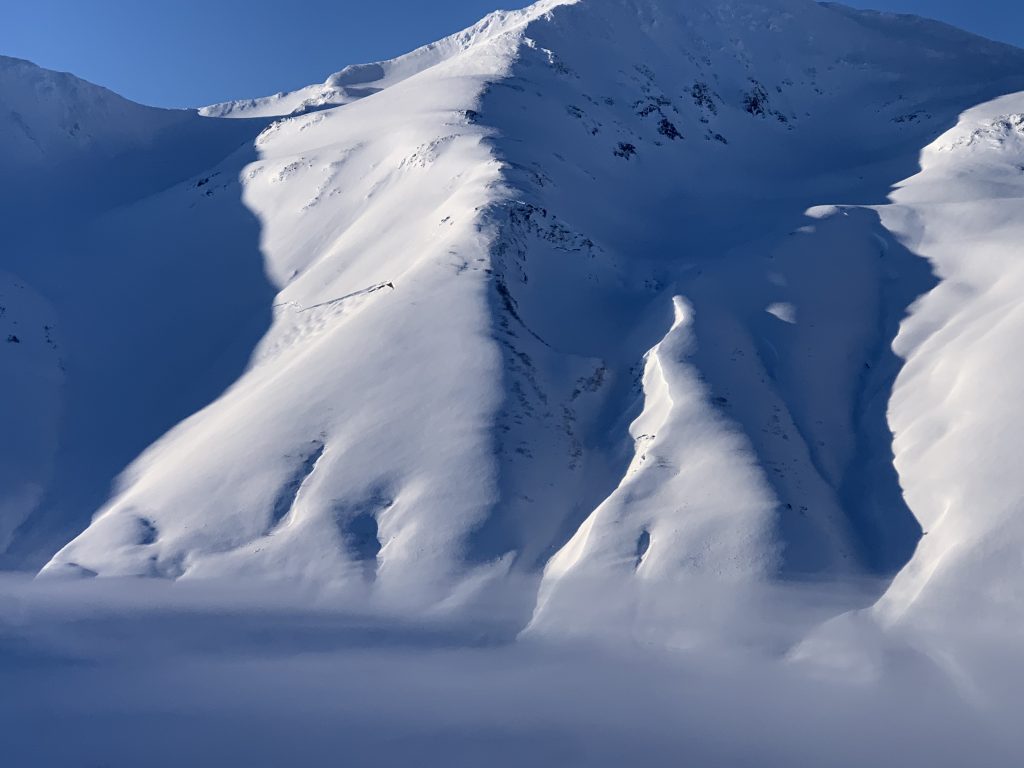 Yesterday: Skies were clear with low stratus and valley fog along Turnagain Arm. There was an inversion with temperatures in the single digits to -10°F in valley bottoms and in the mid to high teens in the Alpine. Winds were west/northwesterly 5-10 mph with gusts into the teens. Overnight skies were clear with valley fog.  Temperatures were in the single digits above 0°F to a few degrees below 0°F in the valley bottoms and in the low teens in the Alpine. Winds were light and west/northwesterly.

Tomorrow: Skies will be sunny in the morning with increasing clouds and a chance of snow showers late in the day. Temperatures will be in the high teens to low 20°Fs. Winds will be light and easterly, increasing overnight.