Today’s avalanche danger is MODERATE at elevations above 1000’, where it will be possible to trigger an avalanche 1-2’ deep on steep slopes where stiff, older wind slabs sit on top of a layer of weak snow. If you are trying to access steeper terrain, be sure to avoid previously wind-loaded slopes with stiff slabs at the surface. Slopes without a stiff slab on top will be safer in general, but be aware of fast-moving sluffs gaining volume with 6-12” loose, unconsolidated snow at the surface.

SUMMIT LAKE: There are weak layers deeper in the snowpack that are still capable of producing avalanches in the Summit Lake area. The most recent activity on this layer was a natural wind slab avalanche that stepped down to facets near the ground last Monday (Feb. 1).

We are very saddened to hear about two more fatal avalanches yesterday– one in which 4 people died in Utah, and another with one fatality in Montana. This has been a grim week for avalanche accidents, with 15 fatalities since last Saturday, including an accident with three fatalities on Bear Point in Chugach State Park last Tuesday. Our condolences go out to the families and friends of everyone involved. You can find more info on these accidents here.

Seattle Ridge: One skier was caught and carried, but not buried, after triggering a small avalanche 10” deep and 40’ wide. The skier was uninjured. More details here.

Tincan: A skier remotely triggered an avalanche in the Tincan trees, which propagated 30’ wide and 10” deep on the buried surface hoar layer, and ran for 100 vertical feet. Details here, video here. 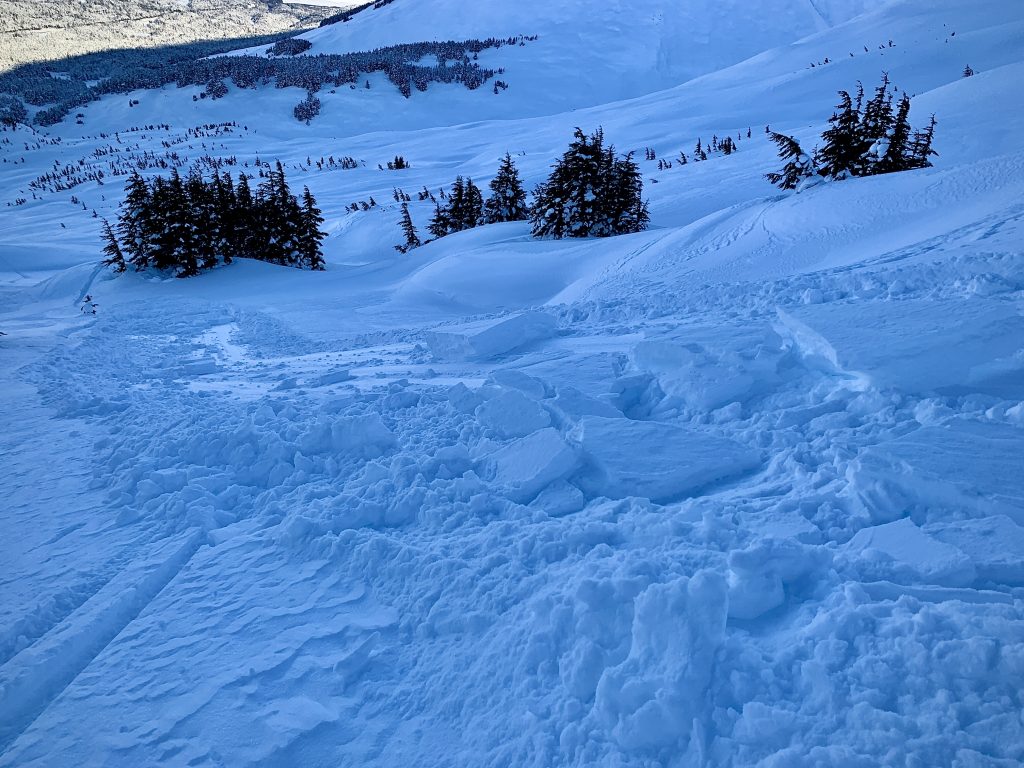 Looking down at the debris pile from a remotely-triggered avalanche in the Tincan trees yesterday. Photo: Nick D’Alessio. 02.06.2021

The biggest concern today will be triggering an avalanche 1-2’ deep where a stiff slab rests on a weak layer of buried surface hoar and faceted snow. Thankfully, it does not look like yesterday’s winds got quite as strong as we were anticipating. Although we were spared any widespread damage, the light to moderate winds have redistributed snow into stiff slabs on some slopes, which sit on top of a weak layer of buried surface hoar and near-surface facets. We received reports of human-triggered avalanches from two different groups on Seattle Ridge (details here and here) and a third group in the Tincan Trees (details) yesterday. It is still possible to trigger an avalanche on slopes that have seen previous loading, with stiff snow at the surface today. These may be recognized from a distance by their smooth, pillowy texture, or you might notice stiffer, ‘punchy’, hollow slabs as you approach a potentially dangerous slope. This combination will sometimes– not always– show clues of instability, like shooting cracks or collapsing. If you see any of these signs of instability, choose different terrain that has not been previously wind-loaded. Sheltered terrain will have the best riding conditions anyway. With varying wind directions since our last snowfall, it is difficult to identify any kind of pattern with wind loading. Be on the lookout near ridgelines, convexities, and cross-loaded gullies on any aspect.

There are some areas for which we have limited observations from yesterday, that tend to experience stronger winds when we have these northwesterly wind events. Be extra cautious if you plan on heading out in near Crow Pass, or in the Summit Lake area, as these places may have seen stronger winds yesterday than weather stations are able to capture.

Loose Snow Avalanches (Sluffs): Continued cold and clear weather is keeping the surface snow dry and loose in areas that have been sheltered from the wind. Be aware of fast-moving and high-volume sluffs in steep terrain, especially if you are traveling near terrain traps like cliffs, rocks, trees, or gullies.

Cornices: Cracks have opened up where large cornices are peeling away from cornices. If you are traveling along ridgelines be sure to give them plenty of space, and minimize the amount of time you spend traveling below them. Cornices will fail easily under the weight of a person, and they may trigger an avalanche if they fall on a wind-loaded slope below. 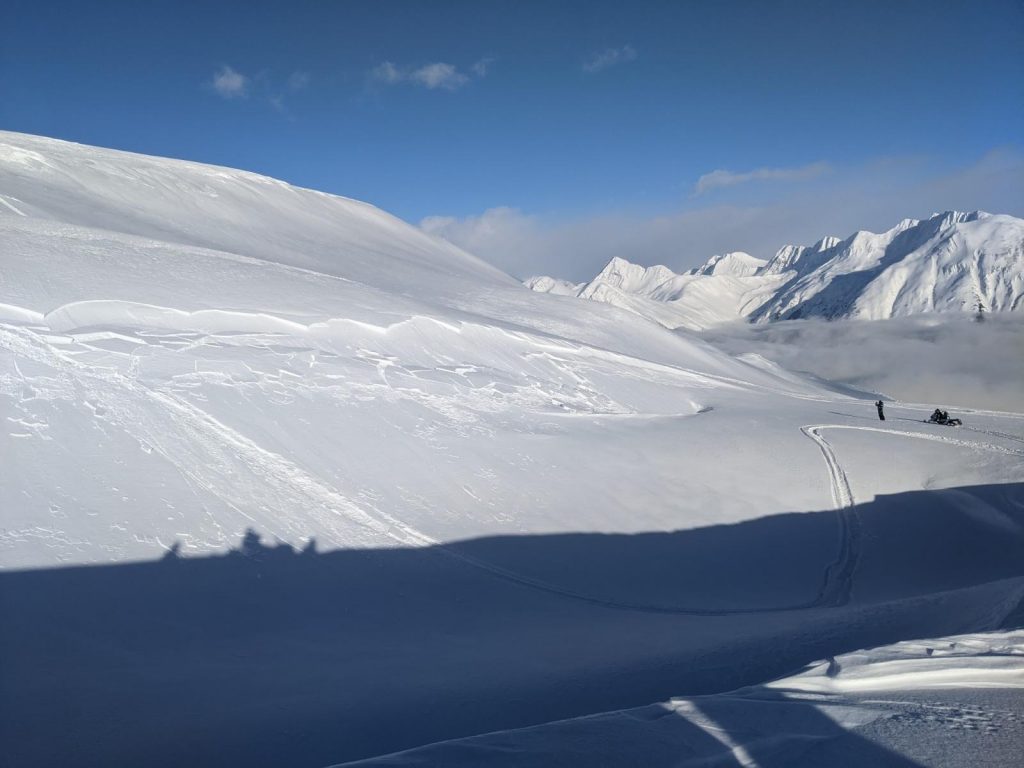 Glide cracks have opened up throughout the area. These avalanches are unpredictable and they are large since they involve the entire season’s snowpack. Avoid spending any time on or below slopes with glide cracks, and if you see any new glide activity please let us know here.

Yesterday: High temperatures reached the upper teens to low 20’s F under mostly sunny skies, with some lingering valley fog through the day. Northwesterly winds were blowing 5-15 mph at the ridgetops, with gusts to 31 mph at Sunburst. Low temperatures were in the single digits below zero F at Summit Lake, and in the single digits to low teens above zero F near Girdwood and Turnagain Pass.

Today: Another day of clear skies is on tap for today as an upper level high-pressure ridge stays in place over the area. Westerly winds are expected to stay around 5-15 mph, and temperatures are expected to reach the mid- to upper teens F.

Tomorrow:  Low temperatures will dip down into the single digits F tonight, and possibly below zero again near Summit Lake. Highs tomorrow are expected in the mid- to upper teens F tomorrow, with westerly winds blowing 5-10 mph. We are expecting another day of mostly sunny skies, with no precipitation.