The avalanche danger is CONSIDERABLE above 1000′ today. Strong winds and 2-6″ of new snowfall will be building fresh wind slabs up to 2′ deep that are likely to be triggered by a person and possible to cause natural avalanches. Cautious route finding and conservative decision-making is recommended in areas that are seeing active wind loading. Keep an eye out for snow being transported onto leeward slopes, hollow feeling snow, and shooting cracks to help locate areas with fresh wind slabs.

Below 1000′ the avalanche danger is MODERATE. Below 700-1000′ the snowfall could transition to rain this afternoon which will create the potential for wet loose avalanches.

SUMMIT LAKE/LOST LAKE/SEWARD: Strong winds will impact these areas as well and fresh wind slabs can be expected at upper elevations.

In the upper Girdwood valley yesterday we saw two fresh looking large debris piles in upper elevation terrain that looked like it could have come from avalanches released during the wind event on Tuesday. We didn’t get a close up look at either debris field and the light was too flat to see the crowns well, so it is hard to be confident about the exact age of these avalanches. 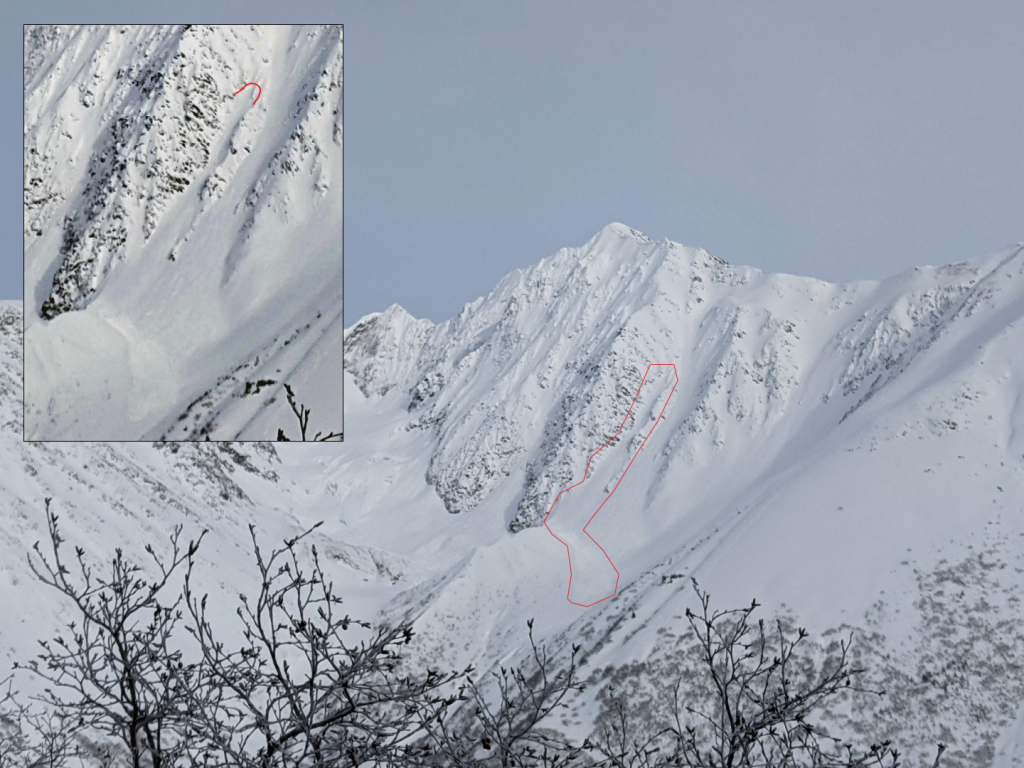 Avalanche debris and approximate release area (noted with red lines) on W aspect of Goat ridge at about 4000′. Photo 2.2.22

Another fast moving storm is passing through our area today, bringing strong winds averaging 15 – 40 mph with gusts into the 50’s at upper elevations and 2-6″ of new snow. Snow line will be moving up to 700 – 1000′ throughout the day. The main avalanche problem will be fresh wind slabs building at upper elevations with the strong winds and new snowfall today. These wind slabs are expected to be up to 2′ deep and will be likely to be triggered by a person and possible to release naturally. With the active weather today conservative terrain selection is recommended by avoiding being on or underneath areas with steep terrain being actively wind loaded. After the last round of winds on Tuesday there is not as much soft snow available for transport in common wind exposed terrain, but strong winds always seem to find some snow to transport.

Several observations from yesterday (here, here) noted that a small layer of surface hoar built up overnight on Wednesday which could cause the new snow falling today to not bond well with the existing snow surface in areas protected from the winds. With only 2-6″ of new snow expected this won’t be a major concern today but could be worth paying attention to as we move forward. In addition we have a couple buried weak layers in the snowpack that we have been tracking, including a thin freezing fog crust from 1.25 buried 1-3′ that produced a bunch of avalanches over the weekend and a layer of facets over the New Years Crust. Deeper avalanches on the freezing fog crust are possible as the wind loading and new snow add some stress to the layer. The New Years Crust is unlikely to produce avalanches at this point in time, but we have seen a few outlier avalanches on this layer and expect it is more likely to be reactive in areas with a thin overall snowpack such as in wind scoured terrain or areas with a shallower snowpack like along the southern boundary of the forecast zone.

Cornices: Another round of snow and winds will be building cornices further which means they could be touchy to human triggers today. Natural cornice fall is also possible today which has the potential to trigger an avalanche on the slope below. 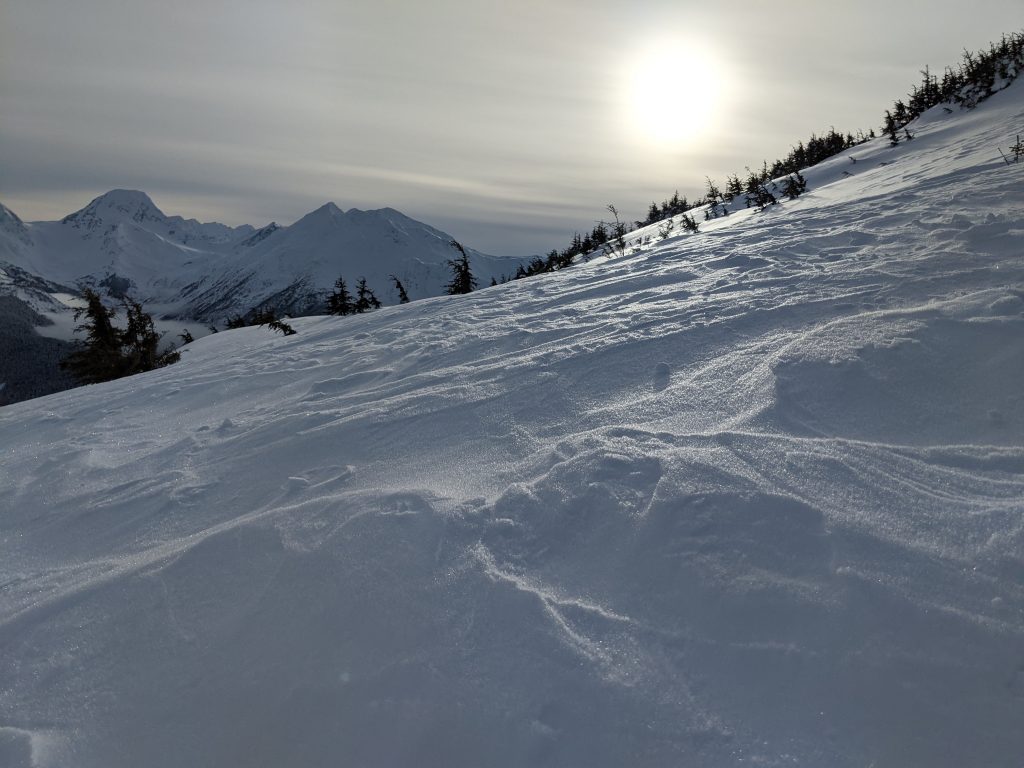 Yesterday: Calm winds throughout the day with partly cloudy skies. Temperatures stayed in the teens to twenties. No new precipitation.

Today: Winds started to pick up just before midnight and have been averaging in the teens with gusts into the twenties since. They are expected to get up to 15 – 40 mph with gusts into the 50s today. A little bit of new snow is expected with 2 – 6″ of accumulation and snow line rising to 700 – 1000′ in the evening.

Tomorrow: Tomorrow looks like another calm period between storms with light winds and better visibility. No new snowfall is expected on Friday. The weekend looks stormy, with snowfall expected throughout but not much accumulation and winds staying mostly light to moderate. Stay tuned for updates on storm totals and freezing levels for the snowfall this weekend.