The avalanche danger is MODERATE above 1000′. Strong east winds yesterday built fresh wind slabs 1-3′ deep at upper treeline and alpine elevations which will be possible for a person to trigger today. Look for signs of recent loading on the snow surface, hollow feeling snow, and pillowy wind deposits on leeward aspects to identify terrain features with wind slabs.

Below 1000′ the avalanche danger is LOW. A thick crust buried underneath a few inches of snow from yesterday will make slab avalanches unlikely.

Today should be a lull between active weather systems with calm winds, temperatures in the teens to twenties, and hopefully improved visibility during the day. The primary avalanche problem is wind slabs 1-3′ deep that were formed during the period of high winds yesterday, which were out of the east averaging 15-30 mph and gusting up to 65 mph on upper ridgelines for a period of almost 24 hours. The fresh wind slabs were touchy at treeline yesterday and we got multiple shooting cracks and small wind loaded features to release within the freshly transported snow. Today they will have had some additional time to adjust but could still be reactive, especially in areas that saw a lot of wind loading yesterday like along upper elevation ridgelines or cross loaded gullies.

We recommend evaluating the terrain and snowpack carefully if you decide to venture into upper treeline and alpine areas today. Look for areas with hollow feeling snow, shooting cracks, and signs of wind loading on the snow surface to identify specific features harboring wind slabs.

There are a few deeper weak layers in the snowpack that could produce larger avalanches if the fresh loading from wind transport has made them more reactive. These include a freezing fog crust from 1/25, which is buried 1-3′ deep, and the New Years Crust. These layers were not reactive in our instability tests yesterday but some of them have produced avalanches during the past week (see ob here) and are worth considering and evaluating before stepping into avalanche terrain. Avalanches on deeper weak layers like the New Years Crust are unlikely but the potential still exists in areas with a shallow overall snowpack, such as the southern portion of Turnagain Pass and wind scoured areas (see ob here for an example of shallow, weak snowpack).

Cornices: High winds yesterday with lots of soft snow at the surface for transport likely added some fresh deposits to existing cornices. It is prudent to give cornices a wide berth when travelling along ridgelines and be aware of their potential to trigger avalanches on the slope below if they release.

Loose Snow Avalanches: In wind sheltered areas the little bit of new snow from yesterday and the existing soft snow on the surface was producing pretty fast running dry loose avalanches (sluffs) in steeper terrain. These will not be big enough to bury a person but could knock you off balance in steeper terrain. 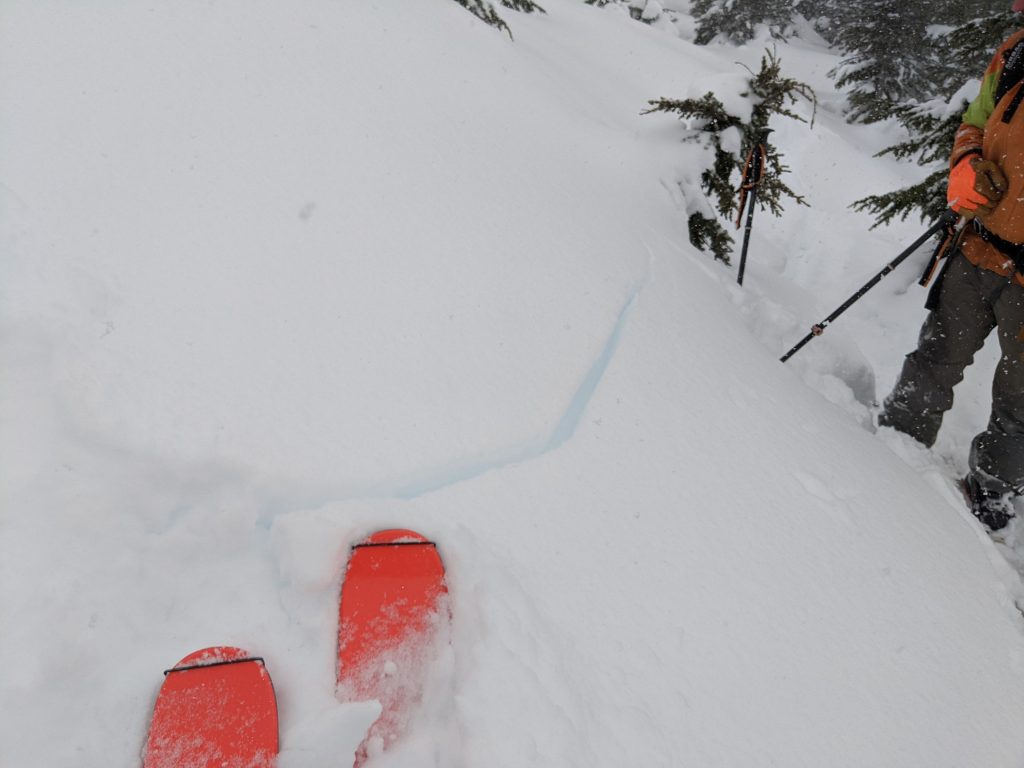 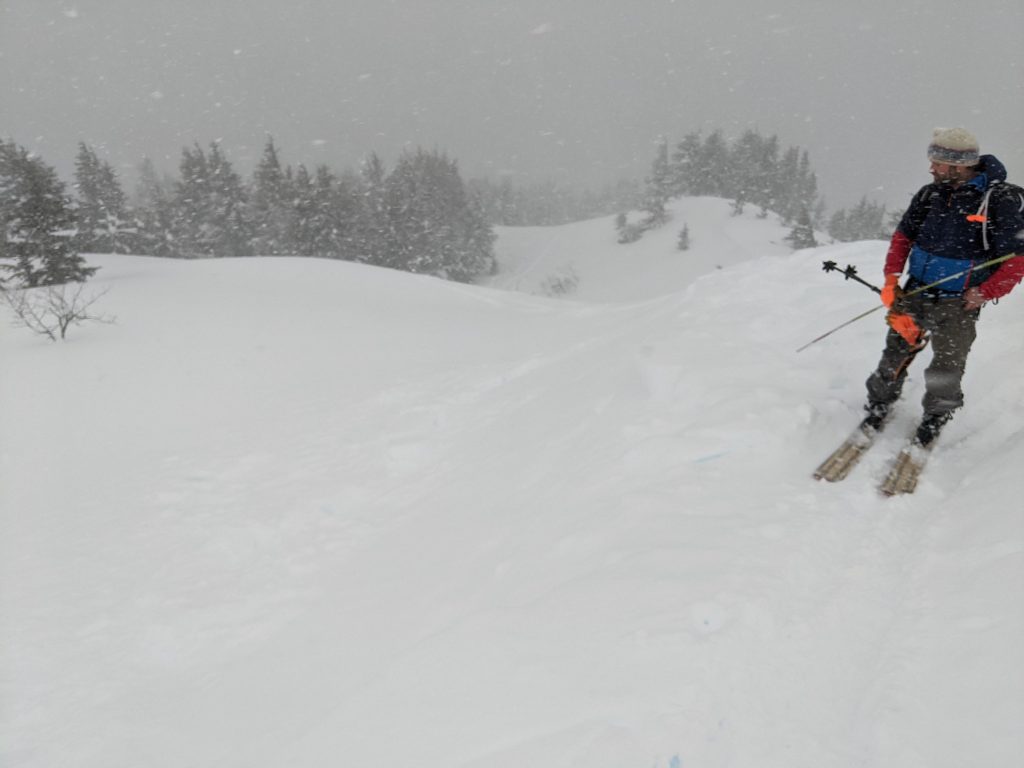 Hard to see, but this is a small fresh wind slab about a foot deep on a cross loaded ridgeline at treeline. Photo 2.1.22

Sunburst winds over the past 36 hours showing the sustained strong winds along ridgelines that built fresh wind slabs. Photo 2.2.22

Yesterday: A pulse of snowfall and high winds moved through the area yesterday depositing 1-4″ of snow. The winds were averaging 15-30 mph with gusts up to 65 mph on upper ridgelines for about 24 hours. Temperatures stayed in the teens to twenties.

Today: Winds have calmed back down today and should remain calm until tomorrow morning. No new snow is expected today. Temperatures should stay in the teens to twenties. We should see a break in the cloud cover during daylight hours today before another system moves into the area.

Tomorrow: Another storm similar to Tuesday will move through the area but with warmer temperatures causing snowline to move up to 200 – 700′. Strong winds in the 15-35 mph range will accompany light snowfall with a few inches of accumulation possible.