One recent large avalanche crown on a steep SW face further down the Manitoba ridgeline, at ~4000'. The more noticeable mid-slope crown may have been triggered by a smaller slab or cornice fall from the ridgeline above and to lookers left in the photo - see below.

Temps in the teens, overcast with a thin cloud layer, generally calm

3" of new snow at the road level yesterday. Yesterday's winds affected the snow surface in clearings above 1500' making the surface snow denser, but no noticeable slabs until treeline. Above 2500', yesterday and prior winds have left a variety of surface conditions... including everything from dirt, the New Years Crust, the 1/25 drizzle crust, a few inches of soft new snow, or, finally, 4-8" thick wind slabs from yesterday.

Ski penetration was ~6" near the road, decreasing with elevation to 0-2" along the ridgeline.

As mentioned above, the 1/25 freezing fog crust could be found along the entire route. Down low, it was barely noticeable in hand pits - only with a bare hand - down ~6" from the surface consistently and surrounded by soft snow. At ridge line, it was thicker and could be found anywhere from on the surface to below new snow, or under new snow and small wind slabs from yesterday as shown in the pit pictured below.

The New Years Crust - as previously reported - varies significantly in how tough it is to break through with ski pole probing. In a distance of 10 feet, it can be easy to punch through or require a great deal of force to punch through to the softer layer below.

Finally, when probing and digging into a small slope at ridgeline that transitioned from dirt to 300cm+ of snow in about 50 yards, we found a thick (10+ cm) layer of large, well developed, and very loose facets under the New Years Crust where the snow depth was ~100 - 150cm. In this location the New Years Crust was close to the surface. 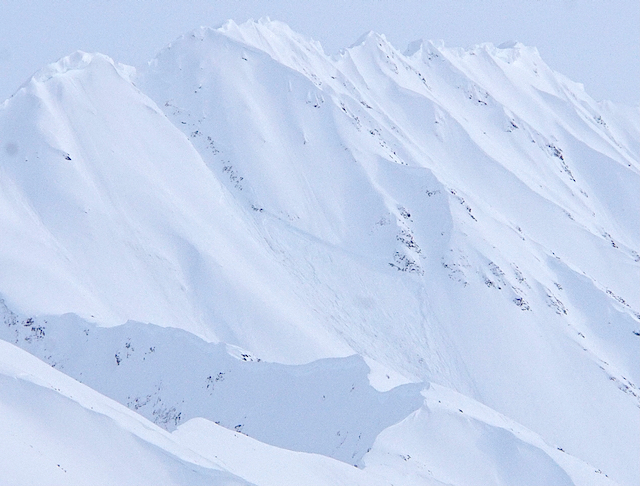 Large recent crown referenced above, with the potential trigger either a cornice fall or smaller slab triggered from the ridgeline up and to the left. Note also the texture of the bed surface, where it appears the slide may have broken through a crust to deeper layers in places. 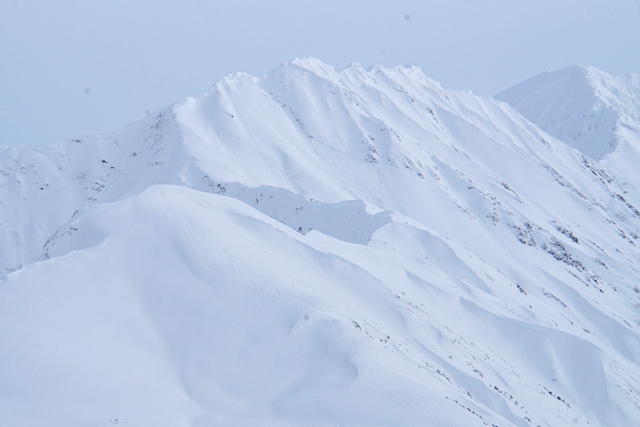 The avalanche pictured above, but including the common Manitoba high point in the foreground. 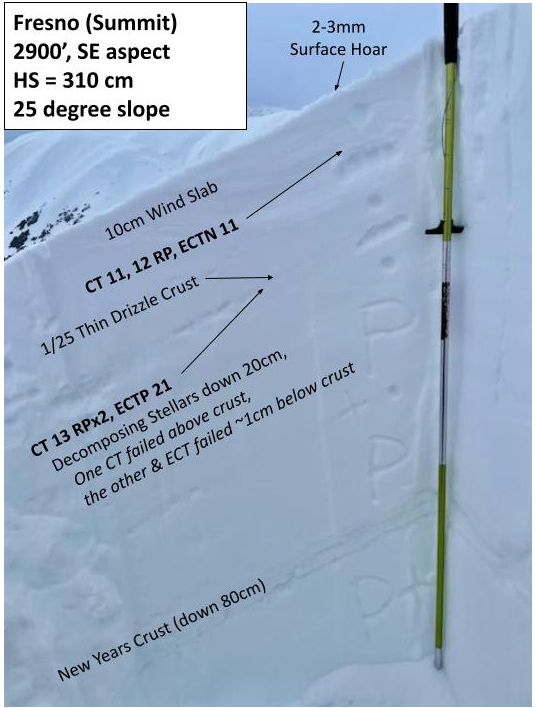 Pit data from a location that has seen wind loading - both yesterday and in days prior. 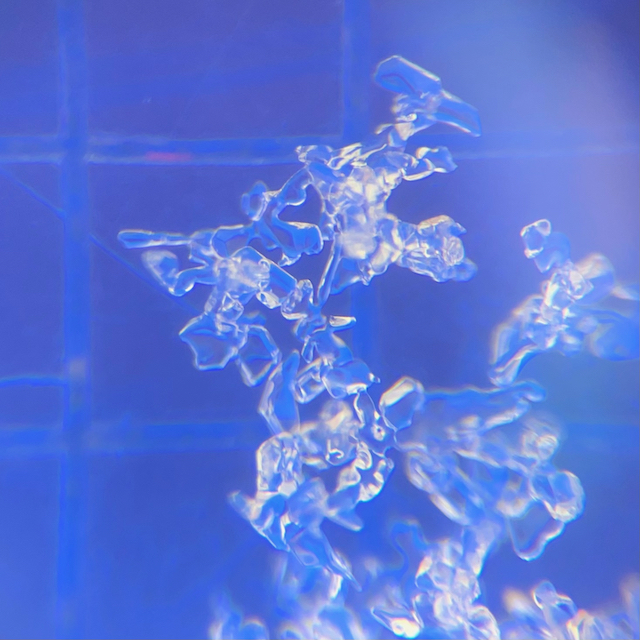 A close-up of the decomposing snow that is the weak layer surrounding the 1/25 drizzle crust on a 2mm grid. 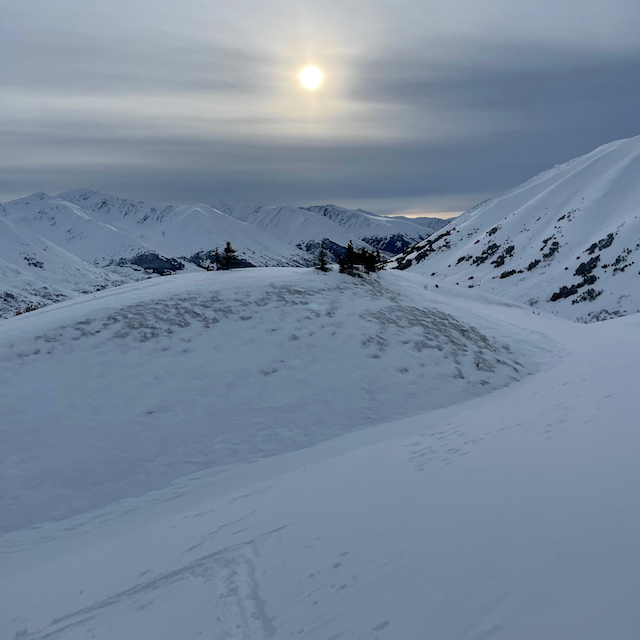 From dirt to the 300cm+ deep wind loaded spot where this photo was taken, there is a lot of variability above ridgeline... 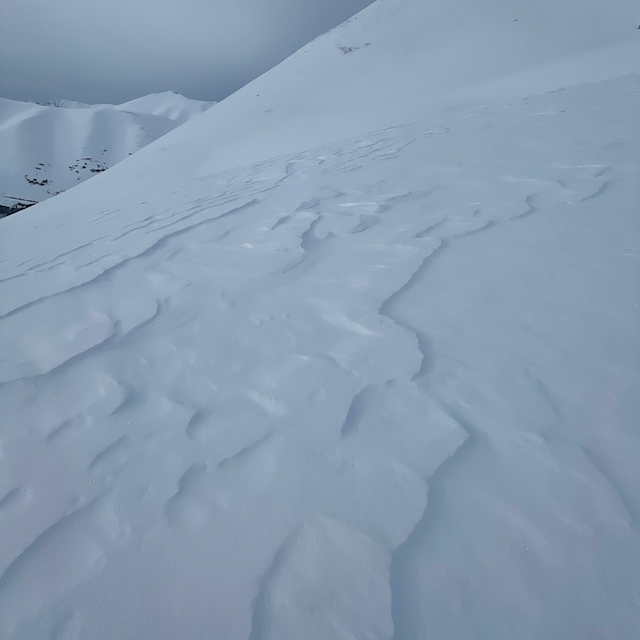 In this location near 2900', the 1/25 drizzle crust had been slightly eroded by yesterday's winds, and was on the surface. 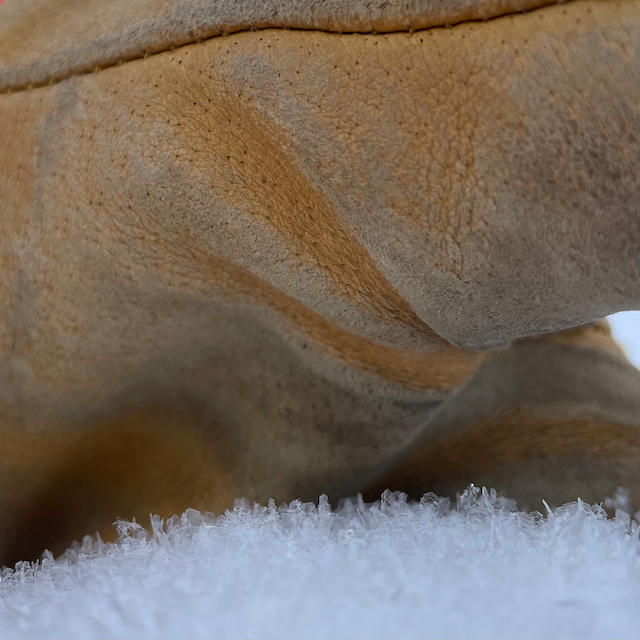 Surface hoar along the route, slightly larger - in the 2-3mm range - at ridgeline. 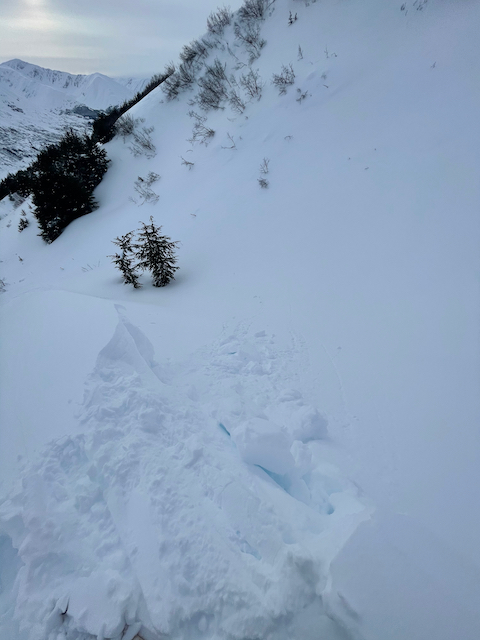 While yesterday's winds made some small cornices at ridgeline, they'd only fail under ski. 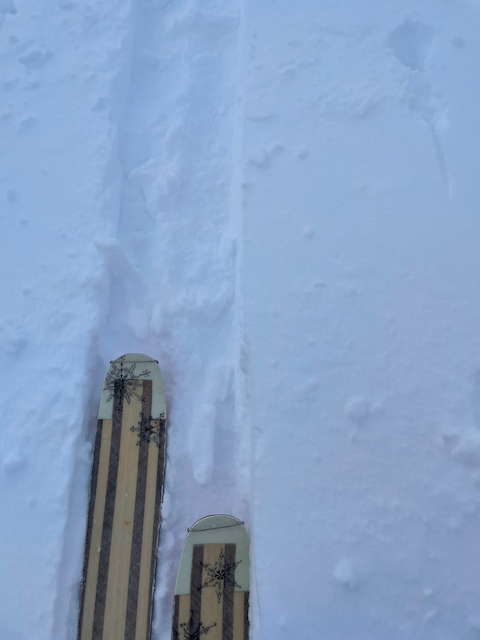 1-2" of ski penetration around 2500' of wind stiffened but still soft snow. 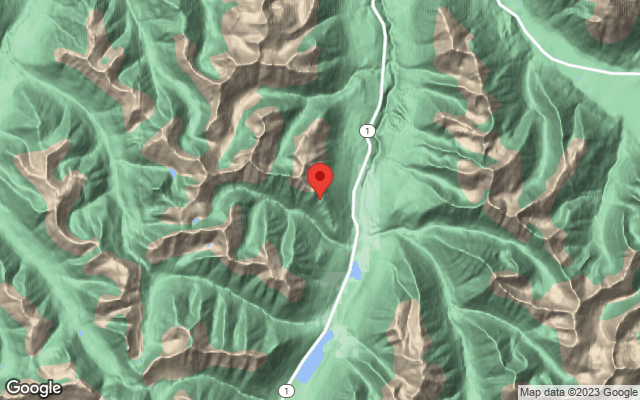