The avalanche danger is a spooky MODERATE. Human triggered wind and storm slab avalanches 8-16″ deep will be possible to find and trigger. A weak layer of buried surface hoar and facets sit under the new low density storm snow, which is inhibiting bonding and may cause slabs to propagate wider than expected. Slabs also may be triggered remotely, from the side, below or above. Pay close attention to signs of instability, such as cracking around you. Additionally, sluffs are expected to be large and fast running on steep slopes where the new snow is too loose to form a slab.

PLACER/PORTAGE VALLEY/WHITTIER: Up to 18″, maybe more, of snow fell in this region over the past few days and larger more dangerous avalanches may be possible to trigger. This includes the lower elevations just above sea level. We have little snowpack information and extra caution is warranted.

LOST LAKE/SNUG/SEWARD: More snow has fallen in the mountains near Seward and large avalanches may be triggered by a person and/or snowmachine. It’s day to be extra cautious here as well.

A skier triggered a storm/wind slab avalanche yesterday on one of the lower Eddies rollovers. The avalanche had wide propagation and is suspected to have run on the buried surface hoar/near surface facet layer that was the surface snow from last week. This layer sits just under the new snow from the past few days. No one was caught and the slab broke just under the skier who triggered it. More details on the report linked above. 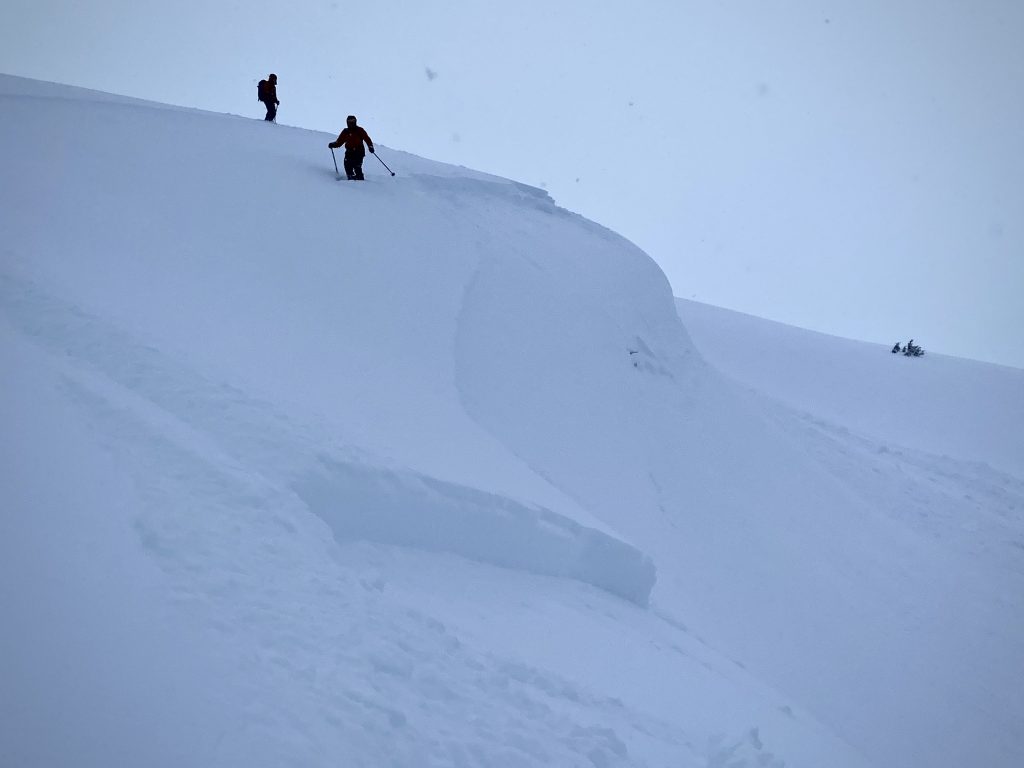 Section of the crown that was triggered on Eddies yesterday. 1.29.21. Photo: Ryan S. 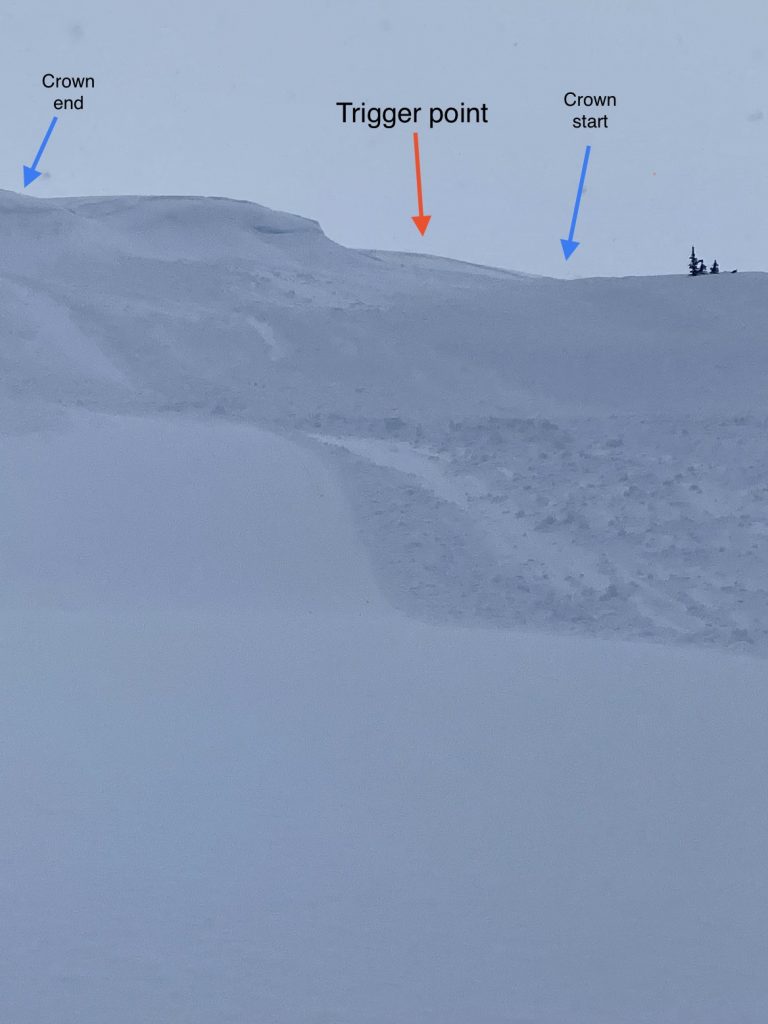 It’s going to be a HEAD’S UP sunny day out there. Not only are there tricky avalanche conditions, but we can expect a busy Saturday in the backcountry. We need to be clued into a few simple things. First, for the first time in weeks 8-16″ of new snow fell on a weak layer of buried surface hoar and near surface facets. Second, the new snow is so loose it’s not necessarily forming a slab everywhere, but where it is, avalanches like the one above from Eddies will be possible to trigger. Third, remember our safe travel protocol; exposing one person at a time, watching our partners, having escape routes planned and being patient if others are on the slope ahead of you.

The good news is, these avalanche issues are right at the surface. Additionally, winds during the snowfall were generally moderate from the NE, so wind slabs may not be as prevalent as with other storm events. That said, although the weak layer is there, it’s whether a slab has formed that’s the question. If you are headed out today watch for:

For those folks thinking about getting into the big terrain, soft wind/storm slabs may be found not only along ridgelines but lower on the slope. Even a small slab triggered could entrain a large degree of snow if the slope is steep and sustained.


Loose snow avalanches (sluffs): Sluffs are likely to be high volume and fast running. They could entrain not only all the new snow, but a portion of the facets that sit below it.

Cornices: As always, give cornices a wide berth and limit exposure under them. They continue to grow and peel along the ridgelines.

Keep your eyes peeled for any new glide cracks. With the clearing skis we may see more of them opening up. Glide cracks can release into avalanches at anytime. They are completely unpredictable and can be very destructive. There are a few cracks on the SW faces of Eddies, Tincan and Manitoba ridges as well as the roadside of Seattle Ridge. Let us know if you see any new cracks or releases.

Yesterday: Light snowfall and mostly cloudy skies were over the area. Turnagain Pass picked up around 3″ of new snow in the past 24-hours and just a trace in Girdwood and Summit Lake. Ridgetop winds were light to moderate along ridgetops, averaging 5-10mph from the northeast. Temperatures bumped up midday to the mid 20’sF along ridgelines, but have cooled back to the high teens overnight. At sea level, temperatures that were near 30F have also cooled to the low 20’sF.

Today: Mostly clear skies with some valley fog is forecast as yesterday’s system heads out and a high pressure ridge builds in. Ridgetop winds look to shift to the northwest and average in the 5-15mph range. Temperatures are on a slow decline as the northerly flow pushes in cold air. Sea level temperatures look to hover near 20F while valley bottoms and ridgelines drop to the low teens.

Tomorrow: Mostly sunny skies with very cold temperatures are expected for Sunday. Models are suggesting there is potential for a strong NW wind event for Sunday into Monday. Stay tuned and cross your fingers the winds stay quiet.