The avalanche danger remains CONSIDERABLE above 2500′, where a thick slab of snow from this week’s storms sits on top of weak snow buried 2-5′ deep. With limited access to the alpine since the snow started falling earlier in the week, it is unclear just how sensitive this setup will be to human triggers. As skies clear today, cautious route finding and conservative decision making are recommended while we gather more information about the potentially dangerous setup.

The danger is MODERATE between 1000′ and 2500′, where it is possible to trigger an avalanche 1-2′ deep on top of two crusts buried in the upper snowpack. Approach steep slopes with caution, and be on the lookout for clear signs of poor stability like shooting cracks, collapsing, and new avalanches.

The danger is LOW below 1000′, where snow surfaces are capped with a breakable crust and avalanches are unlikely.

The domain chugachavalanche.org is down due to a migration with the parent organization eNom. Please message avalanche center staff on Facebook or Instagram, or at the email wendy.wagner@usda.gov.

We are expecting to see the skies clear today for the first time in over a week. With quiet weather for the next few days, our main focus is on the two crusts buried in the upper snowpack. The upper crust formed after temperatures warmed at the end of the 1/10 storm event. It is buried 1-2′ deep and exists at elevations up to around 1800-2000′. This layer was showing up with poor stability test results in snowpits on Friday (see these observations from Tincan and Seattle Ridge for more details). Despite the poor test results, we have seen very limited activity on this interface so far. The second layer of concern is the weak snow on top of the New Year’s crust, which is now buried 2-4′ deep in most places, and up to 5′ deep or deeper on slopes that were loaded with the strong winds from earlier in the week. This layer appears to be gaining strength, but we still have very limited info on how it is behaving in the alpine.

The avalanche problem today is tricky. We know there are two suspect layers in the upper snowpack, which we have very limited information on in the alpine. Because of this potential for large to very large avalanches, and the high level of uncertainty we are currently dealing with in the upper elevations, we recommend cautious route finding today. The clear weather will be a good opportunity to gather more information and assess just how sensitive or stubborn these weak layers are. For now, we need to treat them as guilty until proven innocent.

If you are planning on getting out today, be on the lookout for clear warning signs of poor stability like shooting cracks, collapsing, and fresh avalanche activity. Give yourself a wide margin of safety by avoiding traveling on or below steep slopes. Be extra cautious around previously wind-loaded slopes with firm snow on the surface. These hard slabs can make it possible to venture out into the middle of a slope before triggering an avalanche, making it very difficult to avoid getting carried if you were to trigger an avalanche.

As we look at the first sunny day in over a week, which happens to fall on a weekend, there will be a lot of potential triggers (i.e. humans) out in the mountains. If we all dive right into big, steep terrain, there is a good chance somebody will run into trouble. Use today to assess the strength of the snowpack, and keep terrain choices mellow until we get more feedback on how the snow is responding to the heavy load from this week. 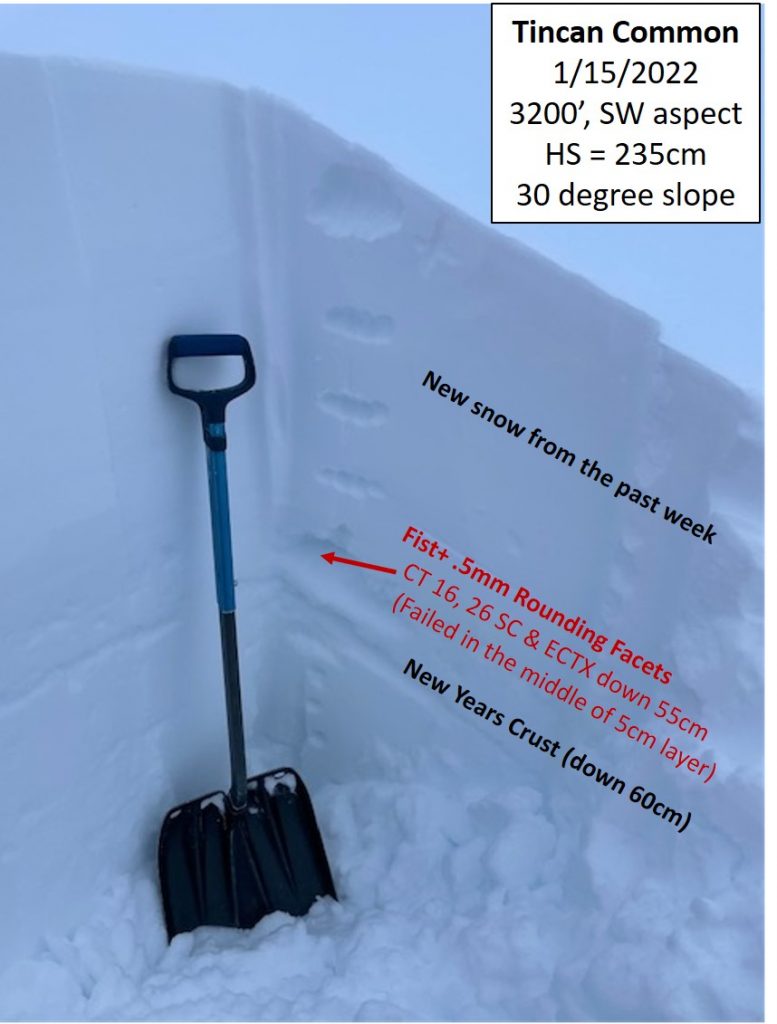 This snowpit is one of our very few data points from the alpine since heavy snow began last Sunday evening. The stability test results (in red) show the weak snow above the New Year’s crust is gaining strength, but still shows the potential to avalanche. Photo: Andy Moderow, 01.15.2022 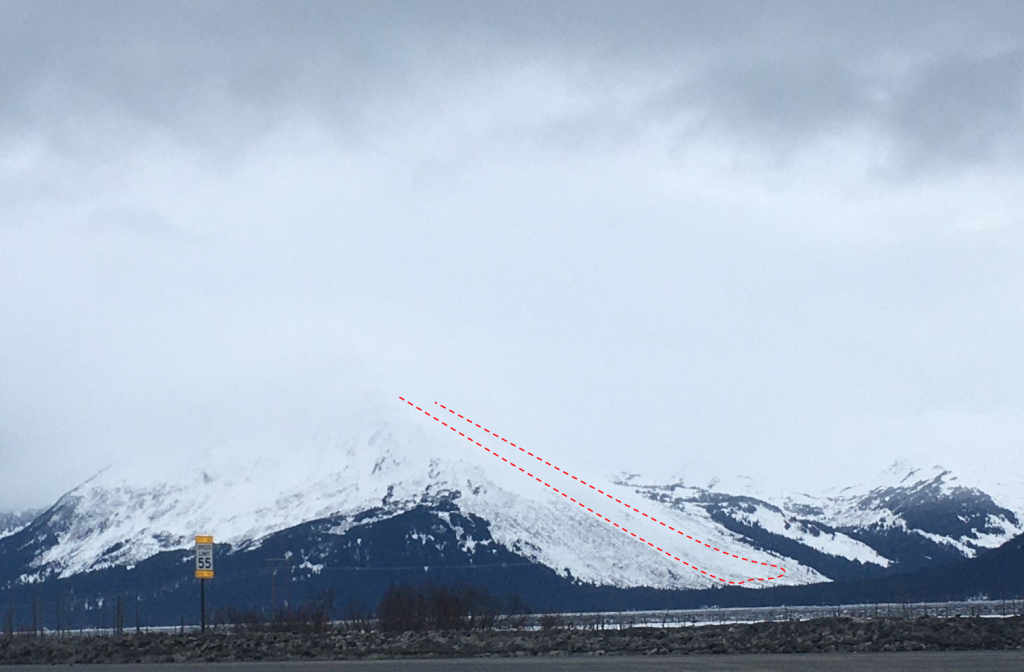 Approximate outline of a large avalanche on the west face of Pyramid,  first noted on Friday afternoon. The avalanche failed during or immediately after the 1/13 storm, and likely ran on one of the two surfaces we suspect may still be capable of producing large avalanches today. Photo taken 01.15.2022.

Yesterday: Skies remained cloudy, with some brief periods where it looked like the sun might poke through. Light snowfall picked up in the afternoon, with some short periods of heavy snow. Weather stations this morning are showing 4″ new snow in Girdwood, 2″ in Turnagain Pass, and 3″ at Summit Lake. Winds were light out of the east at 5-10 mph during the day, shifting westerly and staying at 5-10 mph overnight. Temperatures were in the upper 20’s to low 30’s F, and have slowly been dropping overnight down to the upper teens to low 20’s F as of 6:00 this morning.

Tomorrow: The weather is expected to stay quiet and cool tomorrow, with partly cloudy skies and high temperatures in the upper teens F. Winds are looking to shift back out of the southeast as an upper-level low passes, but they should stay light at 5-10 mph. No precipitation is expected.

Seattle ridge anemometer is covered in rime and not reporting data.