The avalanche danger is CONSIDERABLE in the Alpine (above 2,500′) where yesterday’s winds formed fresh winds slabs and added onto cornices. Winds slabs in the 1-3′ thick range could be easy to trigger on slopes over 35 degrees and in steep cross-loaded gullies. A MODERATE danger exists below 2,500′ for exposed areas that saw enough wind to form wind slabs. Along ridgelines, give cornices a wide berth and avoid travel under them. Additionally, there is a small chance a larger avalanche could be triggered in a deeper storm layer from the past week. Taking our time easing into terrain, looking for signs of instability and using cautious route-finding and conservative decision-making skills will be essential.

What a January. It was January 6th, nine days ago, that the faucet opened and since then, 9.5″ of SWE has fallen at Turnagain Pass. That is roughly 9.5 feet of snowfall at the mid and upper elevations – no wonder the alders are all but gone! That storm snow has been settling fairly quickly, even as new snow keeps piling on. That total has now shrunk to a mere 5-6′. With more snow in the future, we’ll keep the tally going.

As we’ve been mentioning, the heavy precipitation days earlier this week created a widespread natural avalanche cycle. Now that it’s been a couple days with several inches of snowfall here and there, that natural cycle is done. However, ridgetop winds did kick up yesterday into the ‘strong’ category for around 10-12 hours and are slated to remain light to moderate today, which is enough to keep wind slab avalanches the main concern.

Wind slabs: In the Alpine and any exposed area that has seen recent wind effect be on the lookout for touchy wind slabs. These could be up to 3′ thick along the high ridgelines and smaller along the lower ridgelines. Smooth pillowed surfaces and stiffer snow over softer snow are good clues to look for. Any cracks that shoot out from you are definite signs you’ve found a wind slab. Although skies look to remain mostly cloudy through today and travel into the larger and higher terrain may not be doable, watch for these in the mid-elevations as well, on rollovers or in cross-loaded steep gullies.

Cornices: These ridgeline features have changed dramatically over the past 9 days. They are more likely than not teetering on the brink and could easily break with the weight of a person. It’s that time where we need to give them a wide berth from above and limit any exposure under them.

In case skies do clear up for travel into the Alpine, be extra cautious. After so much snow, it’s always a good idea to ease into terrain, look for any cracking or whumpfing in the snow. It’s also not completely out of the question there could be a larger avalanche lurking that breaks in a deeper storm layer that has not bonded yet. 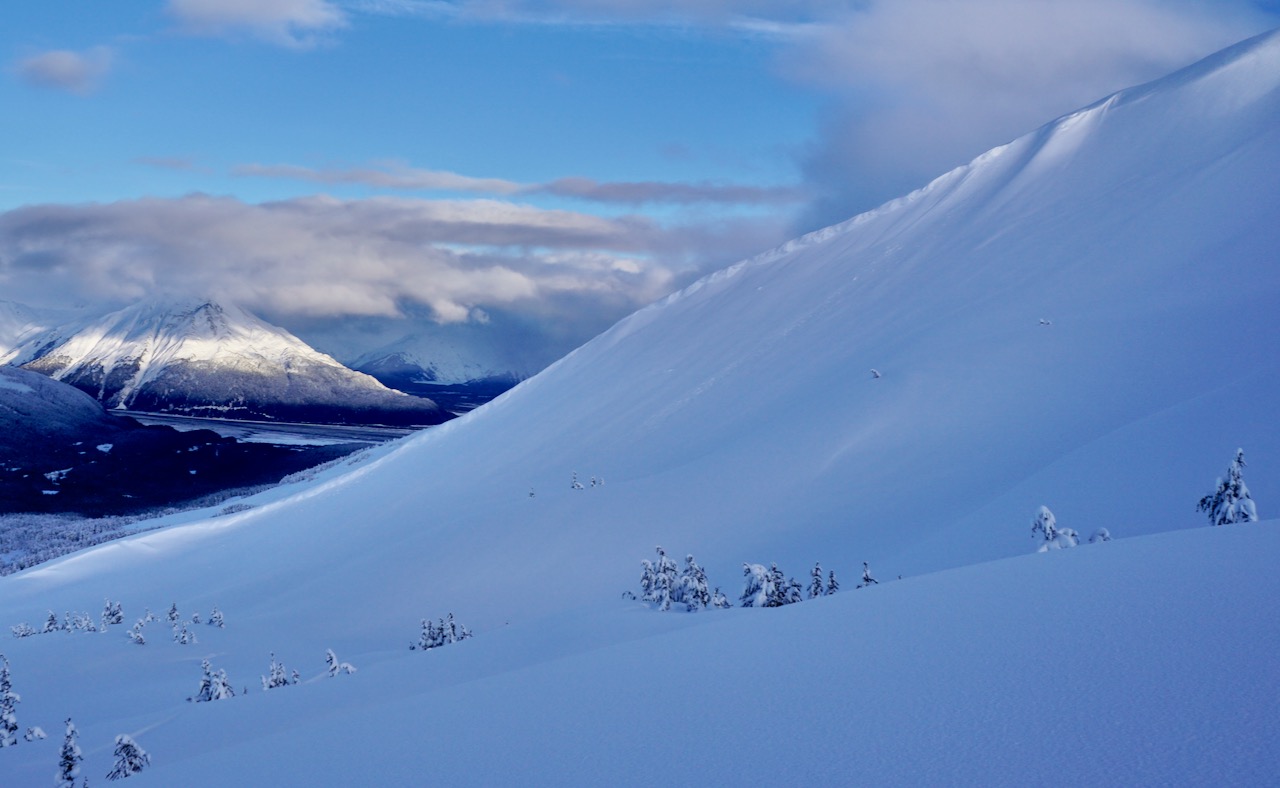 Lower Tincan Ridge. An example of where wind slabs and cornice falls could be found just below the Alpine zones and near the treeline. 1.13.21.

Under all the feet (5-7′) of new snow in the Girdwood and Turnagain zone, there is that old crust/facet combination from Dec 1st that we’ve been watching. It’s from elevations near 2,500′ and below. This layer keeps pointing to not being reactive and bore the weight of the past week’s onslaught of snow. All great news and with the layer being so deep, it’s unlikely a person can impact it and trigger an avalanche even if there was a mid-elevation slope where it was reactive. Possibly we can put this layer to bed soon for the Turnagain and Girdwood areas.

In Summit Lake, much less storm snow fell and the Dec 1 crust/facet combo is only a few feet below the surface. With observers finding varied reactivity with tests, data is pointing to an unlikely chance a person could trigger an avalanche on this layer in this area. Again good news. However, with another load or wind event, shallower zones could become concerning again. 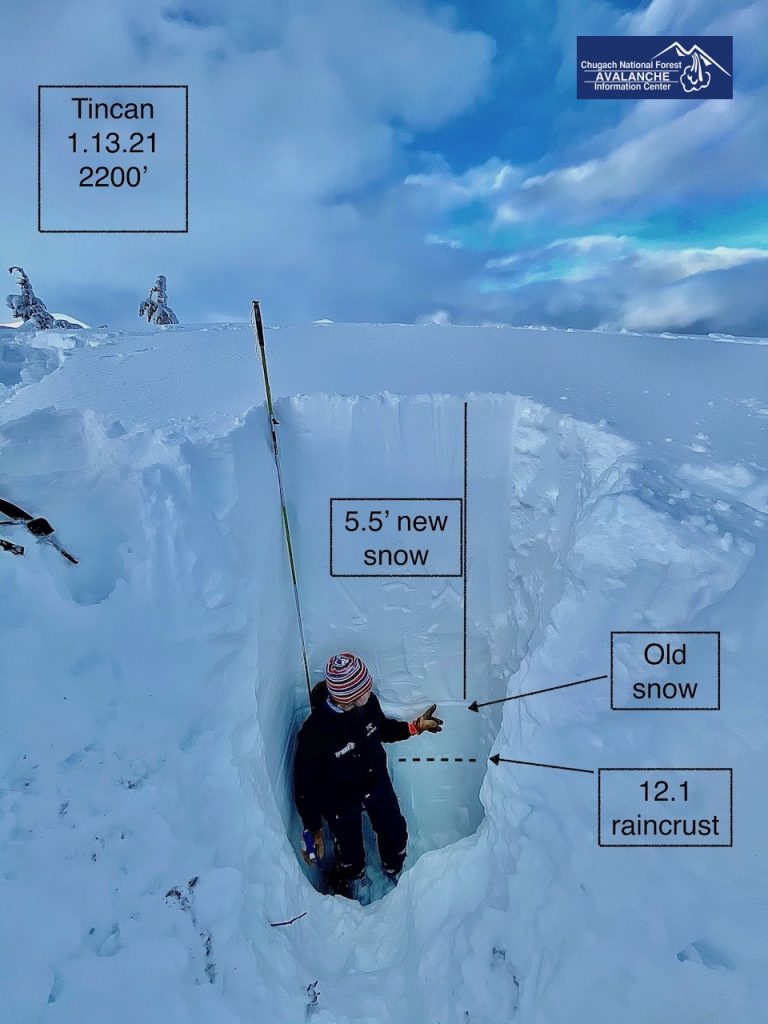 One of my favorite photos of the year so far. What a winter! Aleph Johnston-Bloom stands in a 10′ snow pit on Tincan dug by one of CNFAIC’s all-star observers and checks out the various old buried layers. 1.13.21.

Yesterday: Light to moderate snowfall was over the region. Around 5″ of new snow fell at Turnagain Pass, 2-3″ in the upper Girdwood Valley and only an inch or so in Summit Lake. Ridgetop winds were easterly and ramped up into the 30’s with gusts to 61 mph in the early part of the day before quieting down overnight. Temperatures climbed to 40F at sea level and 30F at mid elevations before cooling off overnight to near 32 at sea level and the low 20’sF along ridgetops.

Today: A band of snow showers has pushed in from the Gulf this morning and expected to add 2-3″ of snow from 1,000′ and above by this afternoon. The rain/snow line looks to climb up to 700-800 ft today, but all snow should fall at Turnagain Pass. Ridgetop winds are forecast to remain easterly in the 15-20mph range before picking up tonight ahead of the next storm front. Temperatures will climb into the mid 30’s at sea level while ridgetops remain close to the mid 20’sF.

Tomorrow: “Warmer air moving in with the next storm system Saturday will raise snow levels above pass level.” A remark in the NWS Recreation Forecast this morning. We can expect winds to be on the rise from the east, snowfall to increase and temperatures to climb tomorrow. This system should be short lived and exit Saturday night before what appears to be a more potent storm headed in for Sunday and into Monday.

*Data from 6am to 10pm. After this anemometer is rimed up again.