The avalanche danger is MODERATE due to the potential for a glide crack to avalanche naturally without warning. Most glide cracks are located in the treeline zone on East   – South   – West aspects below 3000′. Identify terrain with glide cracks and plan your route to avoid travel directly below these unpredictable hazards.  In areas without glide cracks Normal Caution is warranted for triggering wet loose surface snow in the afternoon on solar aspects. Be aware of large cornices in the alpine and give them an extra wide berth.

PORTAGE VALLEY: Summer trails with avalanche terrain overhead, such as Byron Glacier Trail and Crow Pass, are still not recommended in the afternoon or evening due to the possibility of an avalanche or cornice fall occurring above.

SEWARD/LOST LAKE: Similar to the Turnagain area pay attention to changing surfaces on solar aspects later in the day and travel under glide cracks should be avoided.

Avalanche Problem 1
Glide Avalanches
Glide Avalanches are the release of the entire snow cover as a result of gliding over the ground. Glide avalanches can be composed of wet, moist, or almost entirely dry snow. They typically occur in very specific paths, where the slope is steep enough and the ground surface is relatively smooth. They are often proceeded by full depth cracks (glide cracks), though the time between the appearance of a crack and an avalanche can vary between seconds and months. Glide avalanches are unlikely to be triggered by a person, are nearly impossible to forecast, and thus pose a hazard that is extremely difficult to manage.
Likelihood of Avalanches
Terms such as "unlikely", "likely", and "certain" are used to define the scale, with the chance of triggering or observing avalanches increasing as we move up the scale. For our purposes, "Unlikely" means that few avalanches could be triggered in avalanche terrain and natural avalanches are not expected. "Certain" means that humans will be able to trigger avalanches on many slopes, and natural avalanches are expected.
Size of Avalanches
Avalanche size is defined by the largest potential avalanche, or expected range of sizes related to the problem in question. Assigned size is a qualitative estimate based on the destructive classification system and requires specialists to estimate the harm avalanches may cause to hypothetical objects located in the avalanche track (AAA 2016, CAA 2014). Under this schema, "Small" avalanches are not large enough to bury humans and are relatively harmless unless they carry people over cliffs or through trees or rocks. Moving up the scale, avalanches become "Large" enough to bury, injure, or kill people. "Very Large" avalanches may bury or destroy vehicles or houses, and "Historic" avalanches are massive events capable of altering the landscape.

Glide avalanches don’t fit into the North American avalanche danger scale as well as other avalanche problems. They are unpredictable, release without warning, and are not associated with a human trigger. A glide crack is the precursor to a glide avalanche. This is the entire snowpack slowly pulling downhill – and at any moment one could avalanche naturally or remain in balance and not avalanche. Luckily glide cracks are easily identifiable and allow for a person to navigate around them more easily than other avalanche problems that are hidden beneath the snow. Thus-the travel advice for MODERATE danger fits this problem best right now, despite the potential for a glide crack to spontaneous avalanche at anytime. We have seen glide avalanches occurring daily over the last few weeks. Most of this activity has been on solar aspects East, South, and West facing slopes below 3000’. Warm afternoon temperatures and solar radiation are likely contributing to their release, but they can release even if a hard surface crust is present. Bottom line – Identify existing glide cracks and plan your route to avoid traveling under them. Many glide cracks are opening in popular terrain and may require going out of your way to avoid their runout.

Southwest facing terrain of Eddies has seen increased activity this week. Luckily the valley below this terrain isn’t a commonly traveled area. 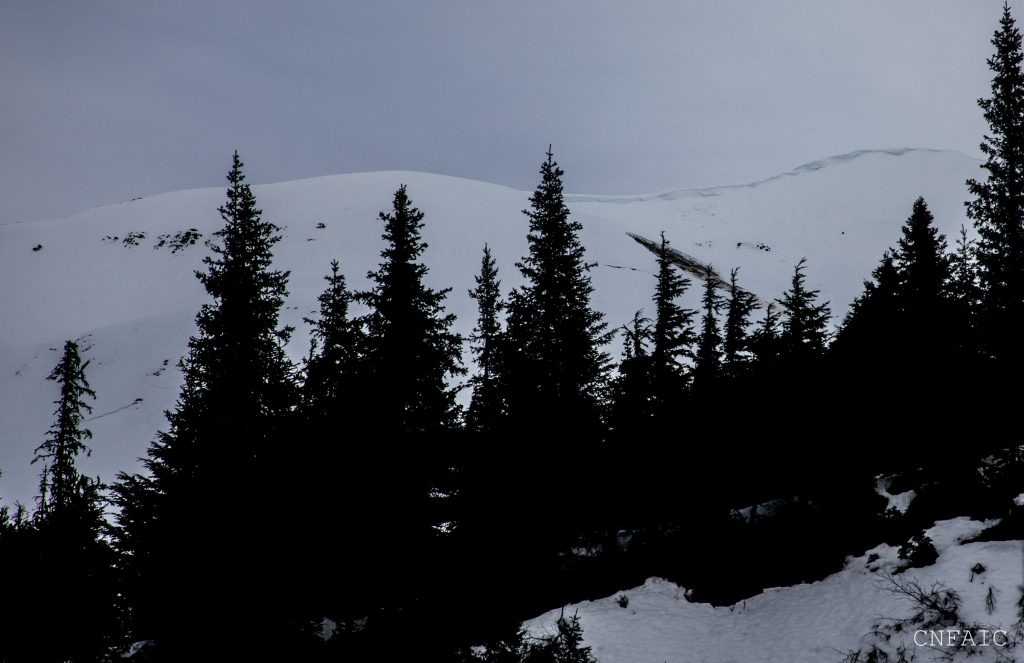 Magnum’s SW face had a glide avalanche release on Tuesday afternoon and several more glide cracks exist on this slope. This is a good example of a common route that has an unpredictable hazard. 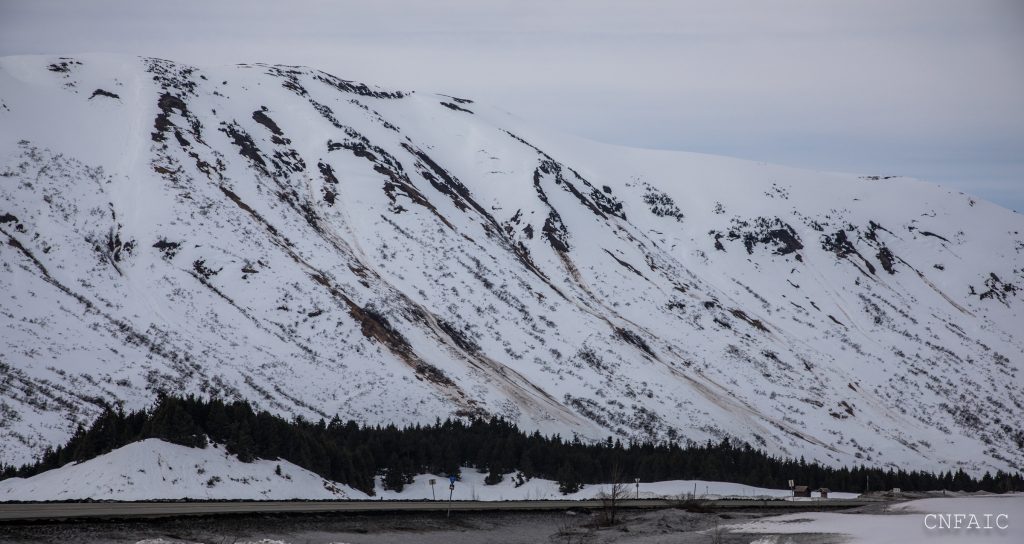 Seattle Ridge has seen a lot of glide avalanches over the last week including one that released over the uptrack last weekend.

LOOSE WET: Triggering wet loose snow in the upper elevations is unlikely today due to increased winds (10-20mph) and cooler air temperatures in the alpine keeping surfaces from melting. Below 2500’ in steep areas with exposed rock or on a thin part of the snowpack triggering wet loose snow will be possible later in the day if the sun appears. This springtime melt/freeze pattern is a normal part of the daily afternoon evaluation of surface conditions on Solar aspects (East to South to West.) If a firm supportable surface crust becomes wet and punchy transition to an aspect/slope with a more supportable surface.

CORNICES: Cornices remain very large along some ridgelines in the alpine. Give cornices a wide berth and avoid travel directly below where one might fall.

South of Turnagain in Summit Lake and areas in the interior Kenai Peninsula have a very poor snow structure with variety of old weak layers within the snowpack. Triggering a persistent slab 2-3’ deep is becoming less likely with time, but not out of the question. This poor structure is most suspect in the alpine above 3000’ – on shaded aspects any time of the day or on steep solar aspects late in the afternoon if a surface crust start breaking down.

This cornice is very large and hangs over the end of Byron Glacier Trail. Snow sitting on rocks tend to heat up quickly when the sun hits this aspect and causes wet avalanche to happen.  Check out an observation from yesterday documenting the avalanche cycle in March that occurred in Byron Valley.

Yesterday: Skies were sunny to partly clouds. Temperatures reached the mid 40Fs in the mid and lower elevations. Ridgetop temps were in the low-30Fs during the day and dropped to the mid-20Fs overnight. Ridgetop winds were light from the Northwest shifting to an Easterly direction, 5-15mph overnight. No precipitation fell.

Today: Skies could range from overcast to partly sunny today in more interior areas of our forecast zone. A mix of rain and snow showers is possible, with up to 1-3 inches of snow possible in more coastal areas like Portage above 1000′. Light rain is expected below. Daytime temperatures in the upper elevations are expected to remain at or below freezing. Mid and lower elevation temps will see a daily temperature range from the low 30Fs to mid 40Fs. Easterly ridgetop winds will increase to 10-20mph in the afternoon.

Tomorrow: Expect skies to be partly cloudy becoming overcast in the evening as a low-pressure system moves into our region Saturday. Temperatures will bump up into the mid 30Fs in upper elevations. For Saturday a mix of rain and snow is expected. At this point snow totals are uncertain, but coastal areas near Prince William Sound will see higher amounts.