The avalanche danger remains HIGH  due to wet and stormy weather causing large wet slab avalanches to release naturally. These avalanches are occurring on slopes near and below 3,000′ and have been taking much of the season’s snowpack with them, which is sending dirty debris to valley bottoms. Above 3,000′ storm snow avalanches and cornice falls are likely.  Once again, travel in avalanche terrain is NOT recommended.

SUMMIT LAKE (& INTERIOR EASTERN KENAI MTS):   Despite less precipitation, natural and human triggered avalanches remain likely. The snowpack has many weak layers are currently being overloaded and stressed by warm temperatures and rain.

SEWARD/LOST LAKE:  Similar to Turnagain – warm temperatures, rain and strong winds are keeping the hazard elevated as many wet slab avalanches continue to release.  Travel in avalanche terrain is not recommended. 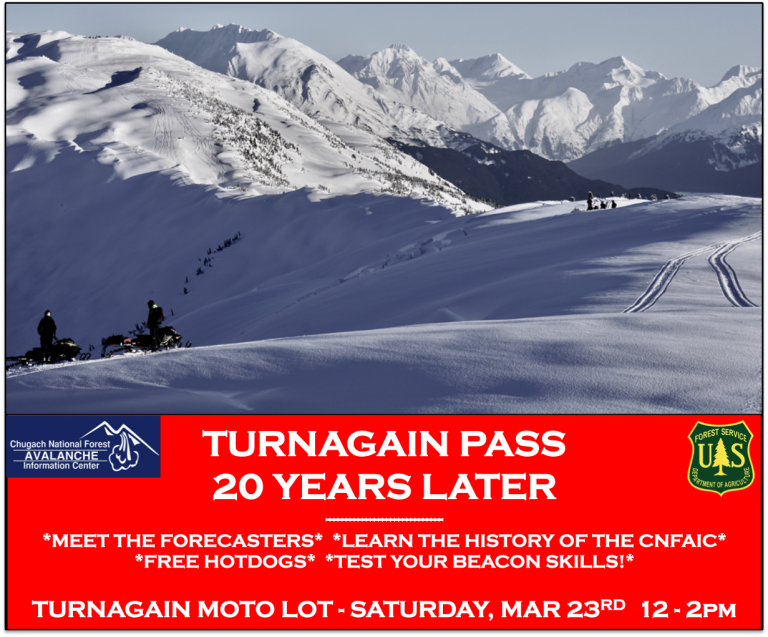 And the avalanches keep coming… After two weeks of wet, windy and rainy weather, the snowpack below 3,000′ continues to saturate into mush and slide off the mountains; in some cases taking the season’s snowpack with it. If you didn’t know it was still March, you’d think it was late April out there. Another batch of fresh wet slab avalanches were seen yesterday at Turnagain Pass and in Girdwood. These were on Sunburst, Magnum, Cornbiscuit and Seattle Ridge as well as Orca and Maxes in Girdwood. With rain falling as high as 3,000′, we are seeing wet slabs break anywhere between 2,000′ and 3,500′. We are undergoing an impressive avalanche cycle and if you’re itching to get outside, come down to the motorized lot today at Turnagain for our meet and greet and watch the avalanche extravaganza from a safe distance!

To put things in perspective quickly, over the past two weeks there has been upwards of 16″ of rain in the Girdwood Valley and 10″ at Turnagain Pass. As we know, the snow line has fluctuated from 1,000′ to 3,000′ during this time, yet is getting warmer and warming with each storm. This morning temperatures are some of the highest we have seen with 4,000′ peaks bumping up to 30F. This is quite a shock to the snowpack. Remember, wet slab avalanches are unpredictable and unsurvivable if someone was to get caught. The message remains – stay well away from any avalanche terrain including runout zones! There is a change is on the horizon however, clearing skies are expected Monday and Tuesday. What the sun and heat will do to the snowpack will be the next question. 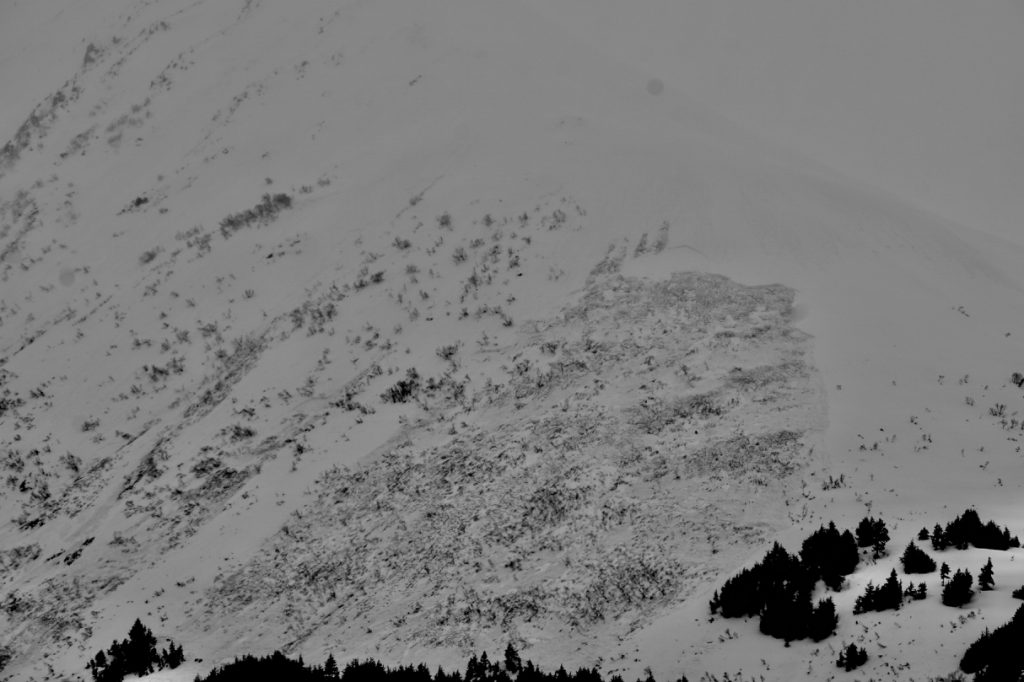 Large wet slab on North facing Sunburst, seen from the Center Ridge parking lot. Released overnight on 3/21 or yesterday morning 3/22. This slab released very near the ground – a closer up image can be found HERE. 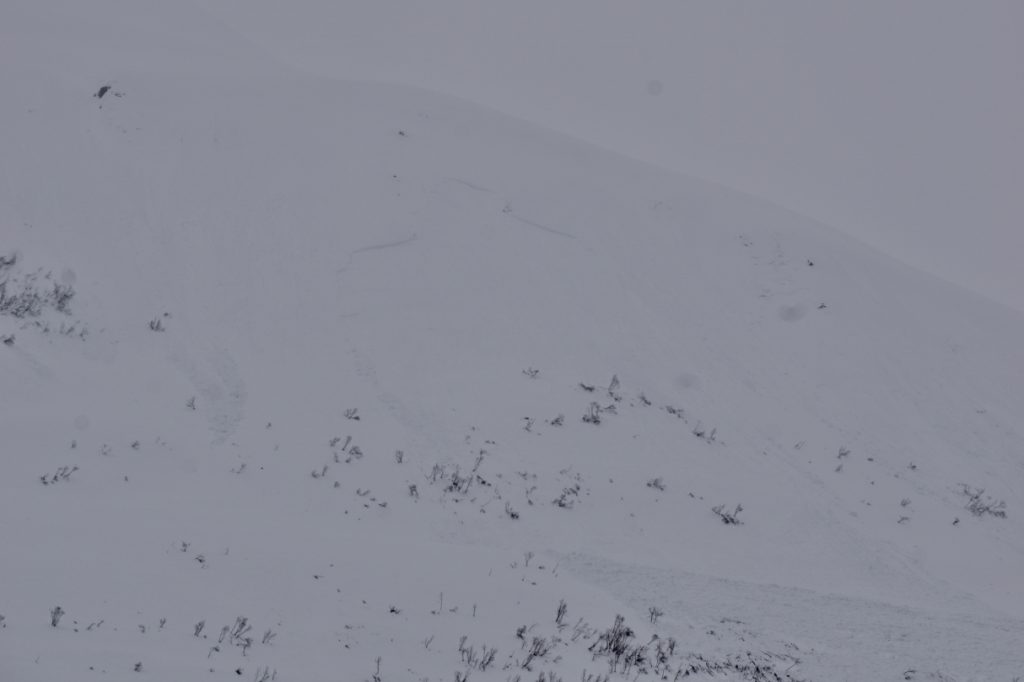 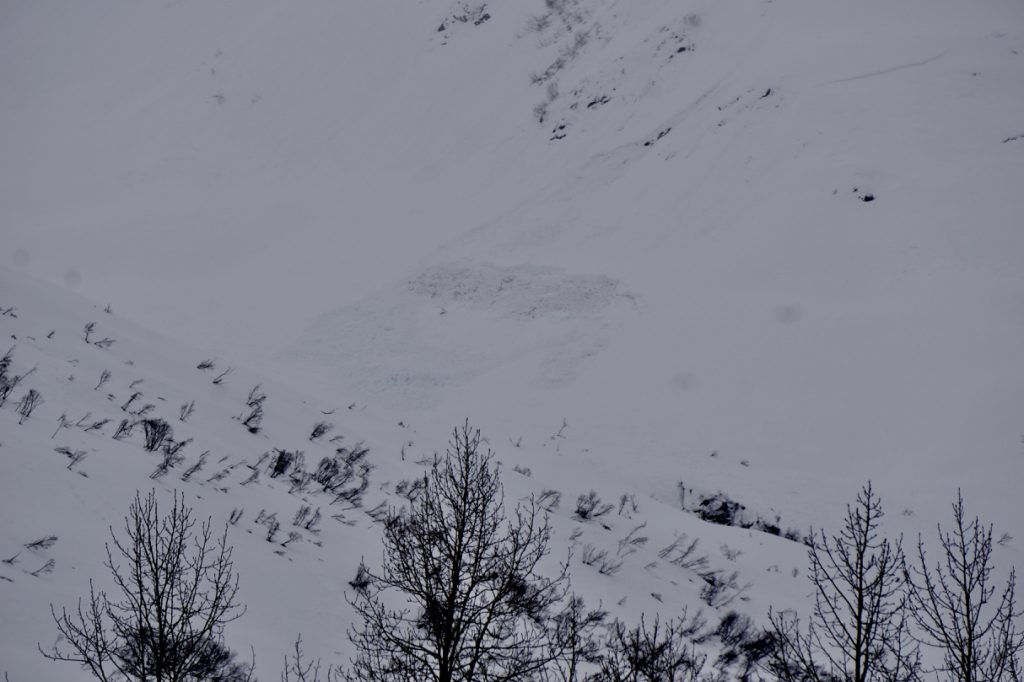 Wet slab on the lower North aspect of Cornbiscuit. Released overnight on 3/21. Another example of how unpredictable the mountains are during this wet weather. 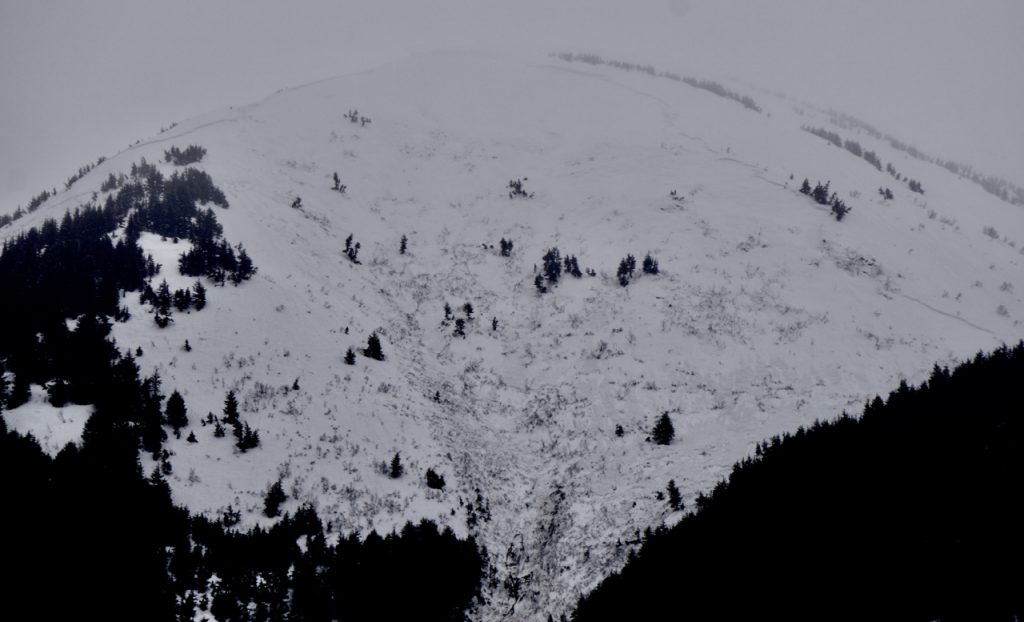 Crown on Orca Mtn, at the head of Girdwood Valley, runs full width. Released overnight on 3/21. Debirs ran full path and into the trees. Image taken from the Tesoro.

Storm Slabs:
What about the upper elevations? Yes, it has been snowing at the higher elevations, yet one must brave the gauntlet of the mid elevations to get there and then hope there is enough visibility to navigate the terrain safely. Although we have little high elevation data since the onset of this two week storm series, we know roughly 1-2′ of new snow has fallen over the past 24-hours with strong easterly winds and therefore can expect the classic storm snow avalanche problems (wind slabs, sluffs and storm slabs) along with cornice falls. Furthermore, Turnagain is looking at 10+ feet of settled storm snow since March 8th and avalanches breaking this deep (on the early March high-pressure surface) are possible – which is a very large avalanche.

South of Turnagain in the Summit Lake and areas in the interior Kenai Peninsula have a very thin snowpack compared to Turnagain. A variety of old weak layers (facets and buried surface hoar) sit in the mid and base of the pack, which have been reactivated by the current warm temperatures and rain. Over the past few days numerous large wet slab and dry slab avalanches have released. These types of avalanches remain possible until a solid re-freeze occurs.

Today:   Cloudy skies with light rain falling up to 2,500′ as the brunt of yesterday’s storm moves out. Roughly .4 – .7″ of rain should fall by tonight, with 3-6″ of wet snow above 2,500′. Ridgetop winds will remain in the 25-35mph range with stronger gusts from an Easterly direction.  Warm air will continue to seep into the region pushing temperatures at 3,000′ to 32F and to near 50F at sea level.

Tomorrow:   Light rain and snow showers are expected to continue tomorrow as this last system slowly moves out. Cooler air filtering in should drop snow lines to 1,500′ or so and ridgetop winds are forecast to be Easterly, 15-30mph. Finally a break in precipitation and cloud cover is slated for Monday and Tuesday as a ridge of high pressure builds in.

*Seattle Ridge weather station anemometer has been experiencing some issues and may be under reporting wind data.