The avalanche danger will remain HIGH today due to heavy rain, above freezing temperatures and strong wind in Turnagain Pass, Girdwood, and Portage. Natural wet slab avalanches are likely below 3000′. In the alpine natural storm slabs 2-3+ feet deep are also likely today and have the potential to step down into a very deep and dangerous avalanche. Travel in avalanche terrain is not recommended.

PORTAGE VALLEY: Very large avalanches have been observed in Portage over the week and are expected to continue today. Travel in avalanche terrain including runout zones, like Byron Glacier Trail is not recommended.

SEWARD/LOST LAKE: Similar to Turnagain – warm temperatures, rain and strong winds will impact this zone today. Wet slab avalanches are likely in the mid and lower elevations and storm slabs likely in the alpine. Travel in avalanche terrain is not recommended.

Heavy rain and strong winds will remain the primary weather factors initiating a wet avalanche cycle below 2500’ today. Numerous large and very large wet slab avalanches have been releasing over the last two days and will continue through today. In some areas wet slab avalanches are taking the entire winter snowpack and leaving behind impressive piles of dirty debris. In other places, drier avalanches are releasing in the alpine and taking out the entire avalanche path – like Lipps West face seen yesterday. Many popular slopes are still intact, hanging in balance and may avalanche at any time. Today’s message is simple – stay well away from any avalanche terrain including runout zones! Wet slab avalanches are unpredictable and unsurvivable if someone was to get caught.

Storm Slabs:
Today expect rain/snow line to fluctuate between 2000’ and 2500’. In the alpine, above 2500’ where 2-3+ feet of new snow has fallen over the last few day storm slabs are expected to be unstable. Strong Easterly winds 30-40mph and up to another 1-2’ of snow will be adding stress to the upper elevation snow pack. Natural storms slabs are likely where the snow is dry and could initiate very large avalanche in an older deeper layer of the snowpack.

South of Turnagain in the Summit Lake and areas in the interior Kenai Peninsula have a very poor snow structure with variety of old weak layers (facets and buried surface hoar) in the mid and base of the snowpack. Warm temps and rain have saturated the snowpack below 2000’ and numerous large wet slab and dry slab avalanches have released. Today up to .5” of rain is forecasted below 2500’ in the interior areas of the Kenai and with it more natural avalanche activity. 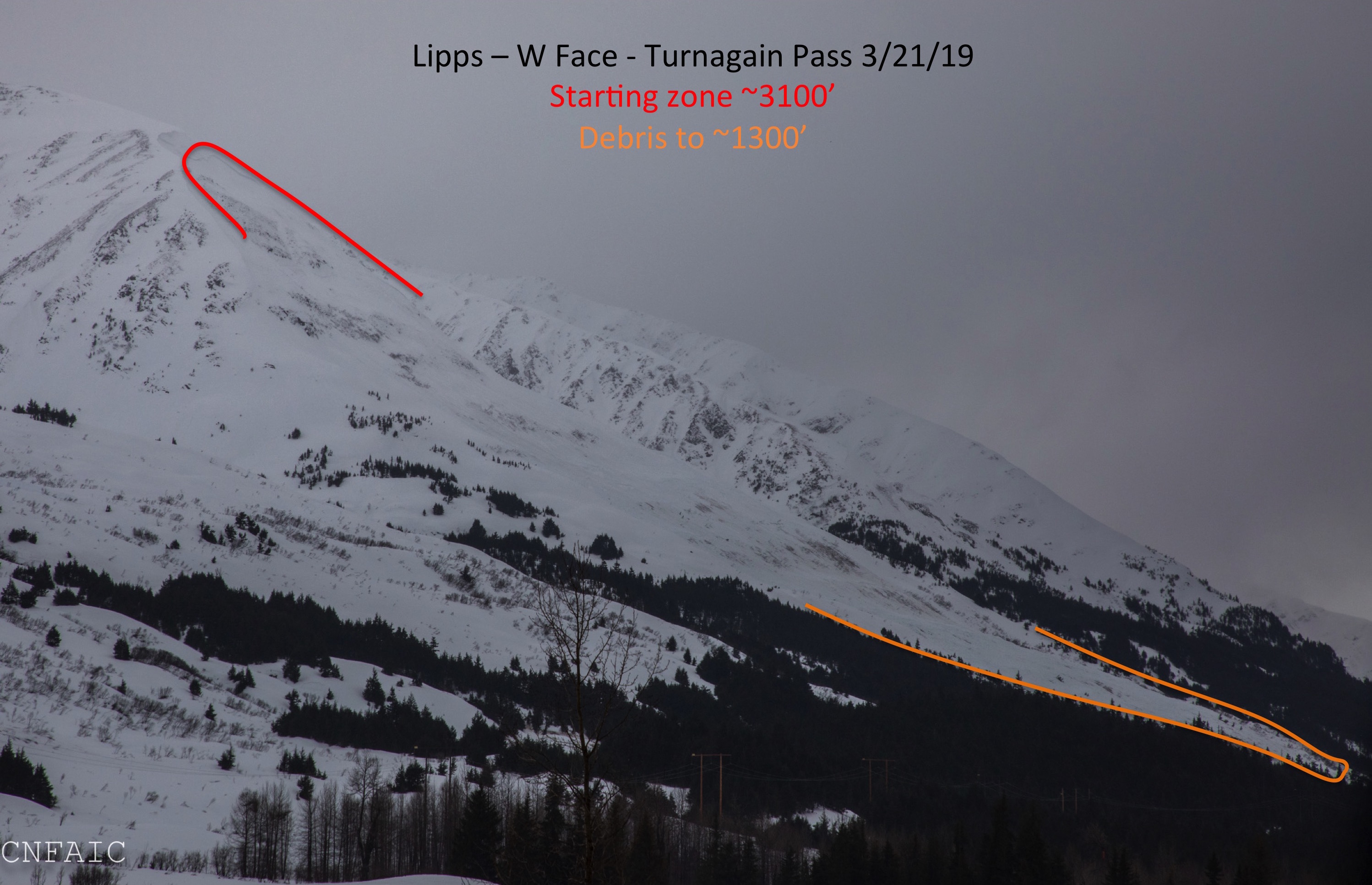 Many wet slab avalanches have been releasing on Seattle Ridge (SE aspect) over the last few days, but many slopes still remain intact and could release at any time. 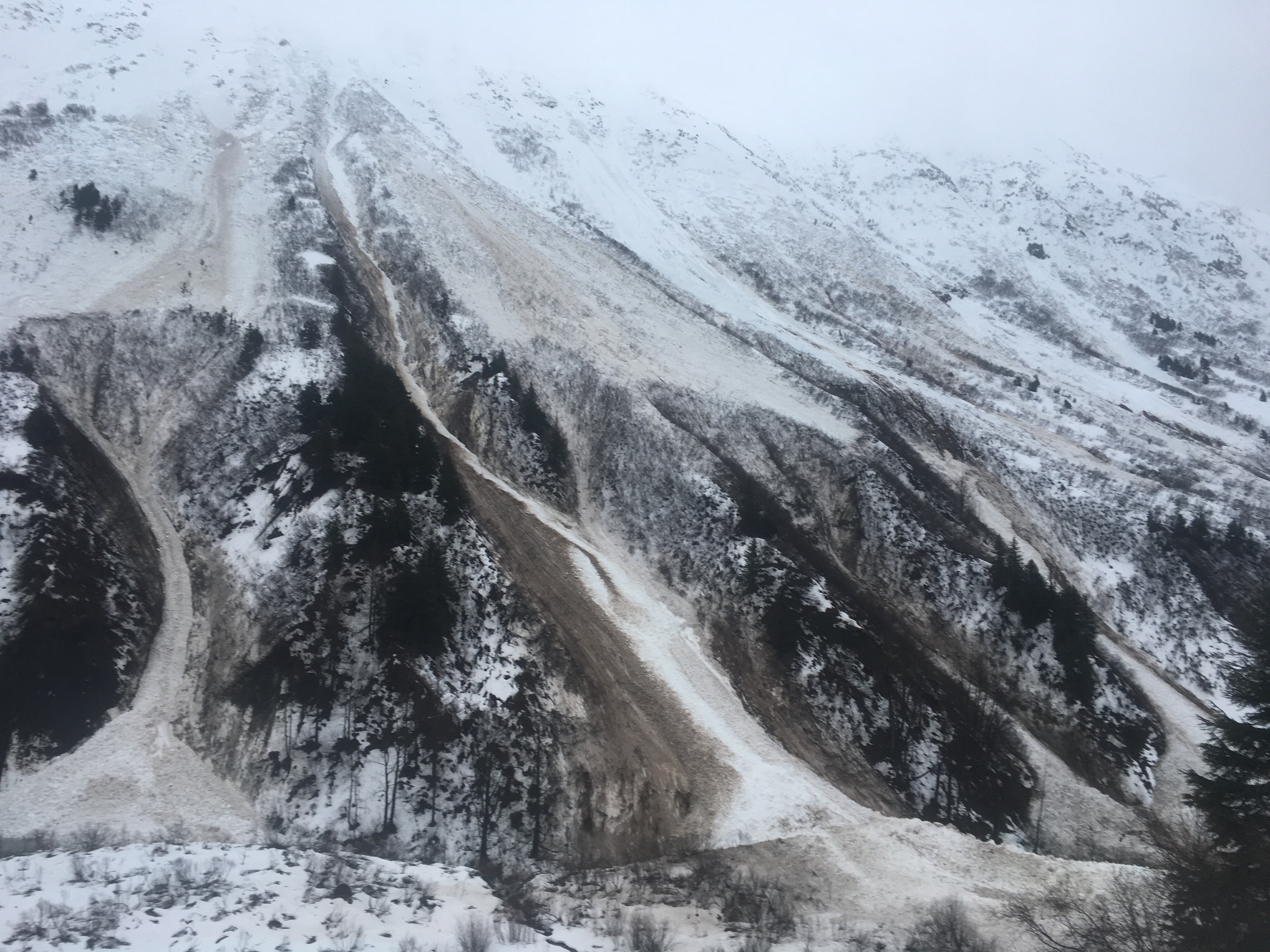 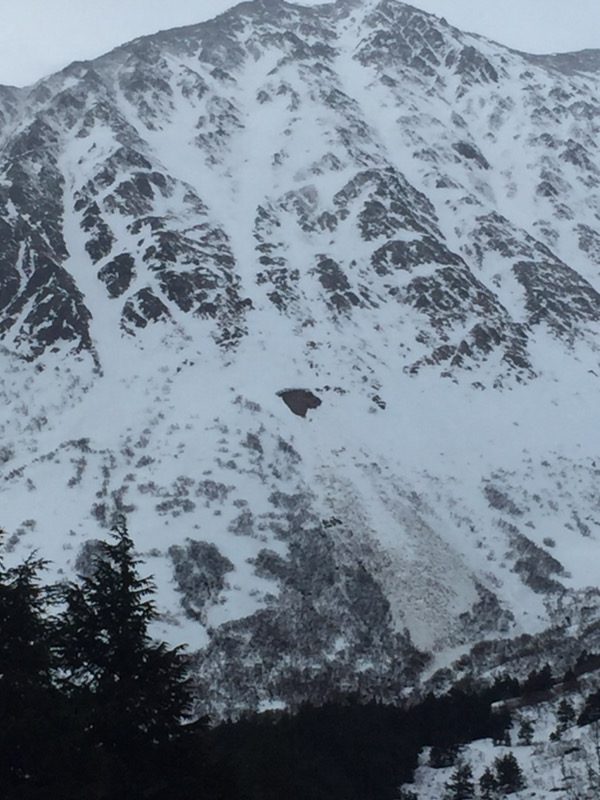 Yesterday: Skies were overcast and light to heavy rain was  observed throughout our region. Easterly winds were strong (30-40mph)  increasing into the 50s mph overnight and several gusts in the 100’s at ridgetops. During the day precipitation was heavier near Turnagain Arm, Portage and Girdwood Valley. Overnight intensity increased for a total of  1″ of rain in Turnagain and 1.6″ of rain at Alyeska Midway station in Girdwood. In Portage 2.27″ of rain was recorded near Bear Valley. In the alpine these water totals translate to 1-3′ of new snow. Temperatures have remained in the low-40Fs at sea level, mid-30Fs at 1000′ and rain/snow line has dropped around ~2000′.

Today: Rain will be heavy in the morning and early afternoon with another 0.5″ – 1.5″ or rain is expected today. This is 1-2′ of snow in the alpine. Higher precipitation totals will favor Girdwood, Portage and the North side of Turnagain Pass – more coastal areas. Temperatures at sea level will be in the 40Fs and upper 30Fs at 1000′. Rain/snow line will fluctuate between 2000′ and 2500′ today.   Easterly Ridgetop winds will remain strong 30-40mph with gusts in the 50-60s mph.

Tomorrow: Rain is expected through the weekend with lighter rain on Saturday. Coastal areas like Portage Valley will see another dose of heavy rain Saturday evening into Sunday. Temperatures will remain in the 40Fs at sea level and mid to upper 30Fs at 1000′. Rain/snow line will be around 2000′. Ridgetop winds from the East will still be elevated, 20-35 mph through Sunday morning. High pressure is in the forecast for Monday and Tuesday, but very warm above freezing temperatures will continue.

*Seattle Ridge weather station anemometer has been experiencing some issues and may be under reporting wind data.