A  HIGH  avalanche danger remains over the region. Warm and wet weather continues to melt down the snowpack and cause large wet slab and wet loose avalanches to release naturally. These avalanches are occurring on slopes near and below 3,000′. They are gouging to the ground, running to valley bottoms at times and very destructive. Above 3,000′ storm snow avalanches and cornice falls are likely.  Once again, travel in avalanche terrain is NOT recommended.

SUMMIT LAKE (& INTERIOR EASTERN KENAI MTS):   Despite less precipitation, natural and human triggered avalanches remain likely. The snowpack has many weak layers are currently being overloaded and stressed by warm temperatures and rain.

SEWARD/LOST LAKE:  Similar to Turnagain – the hazard remains elevated as many wet slab avalanches continue to release.  Travel in avalanche terrain is not recommended.

One last cloudy and rainy day before skies finally clear and let the sun in. Today marks the 18th, and hopefully last, day of this impressive warm March storm series. Despite few folks in the backcountry and limited visibility yesterday, we know of six natural wet avalanches that occurred at Turnagain Pass. One was a wet slab just under Tincan’s CFR ridge, photo below. Another was a glide avalanche on SW facing Eddies Ridge and four were seen/heard by an Alaska Avalanche School Level 1 course. Of these four, three were seen on North facing Sunburst Ridge and one on SE facing Seattle Ridge. During the past 24-hours, close to an inch of rain fell in Girdwood Valley, 2.8″ in Portage Valley and almost half an inch at Turnagain Pass. Today, only .25″ is forecast yet avalanche conditions are expected to remain similar as even light rain on snow up to 2,000′ will keep the pack unstable.

A few things to consider for backcountry travel:

Looking ahead: Sunshine and very warm temperatures (even in the upper elevations) are in the forecast beginning Monday for the week. Avalanche danger may stay more elevated than one might expect. It is true once the snowpack begins to freeze it will lock up and limit avalanche activity. HOWEVER, the pack is incredibly wet and it will take more than one clear night to stabilize it for the morning hours. Of course, sunshine and warm ambient temperatures will quickly destabilize the snowpack again during the day/evening hours. Hence, springtime avalanche issues will be in full effect next week! Keep in mind upper elevations could produce some very large avalanches cornice falls during this warm and sunny period. The mountains do weird things in the spring and we need to be extra cautious with route selection, where we eat lunch, avoiding steep southerly slopes late in the day, and on. 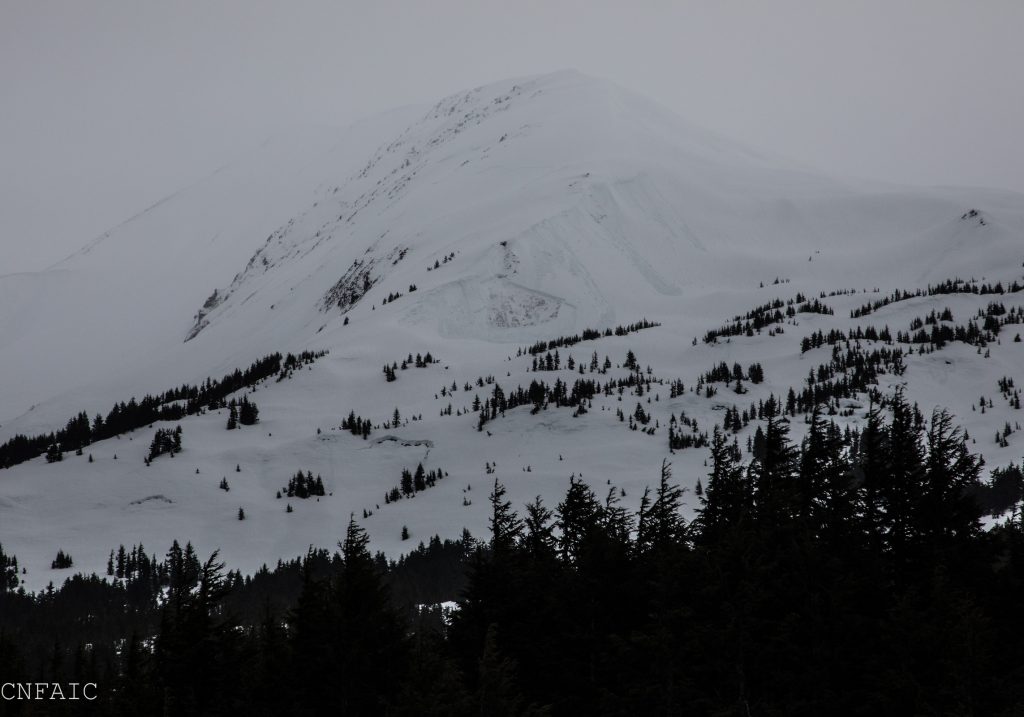 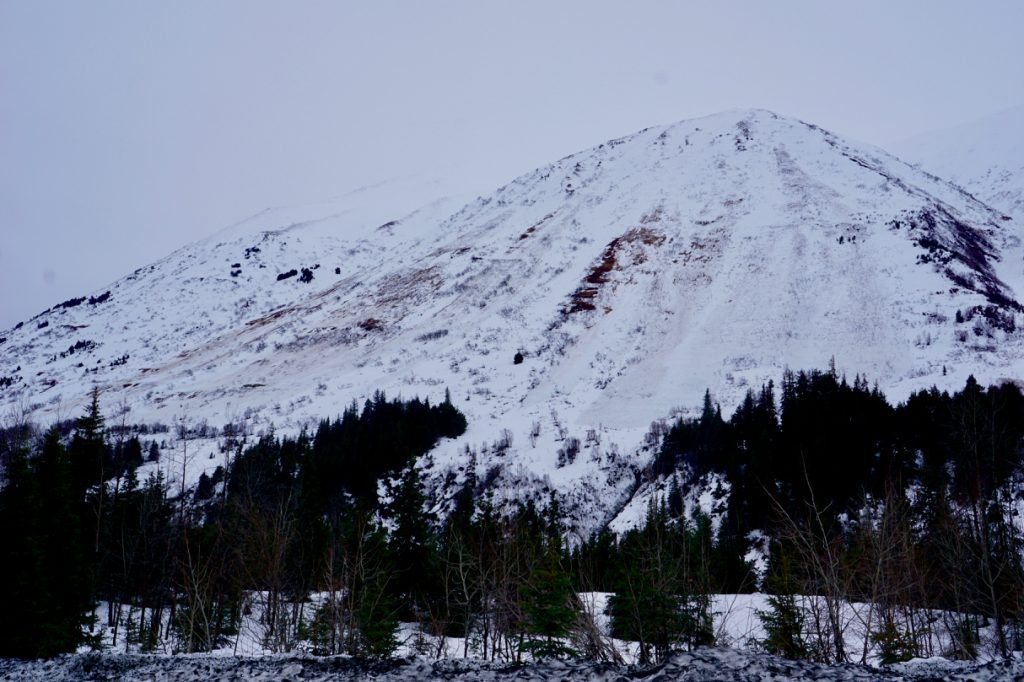 Wet slabs and wet loose avalanches wreack havoc on Seattle Ridge. Many steeper slopes has avalanched and many are hanging in the balance. 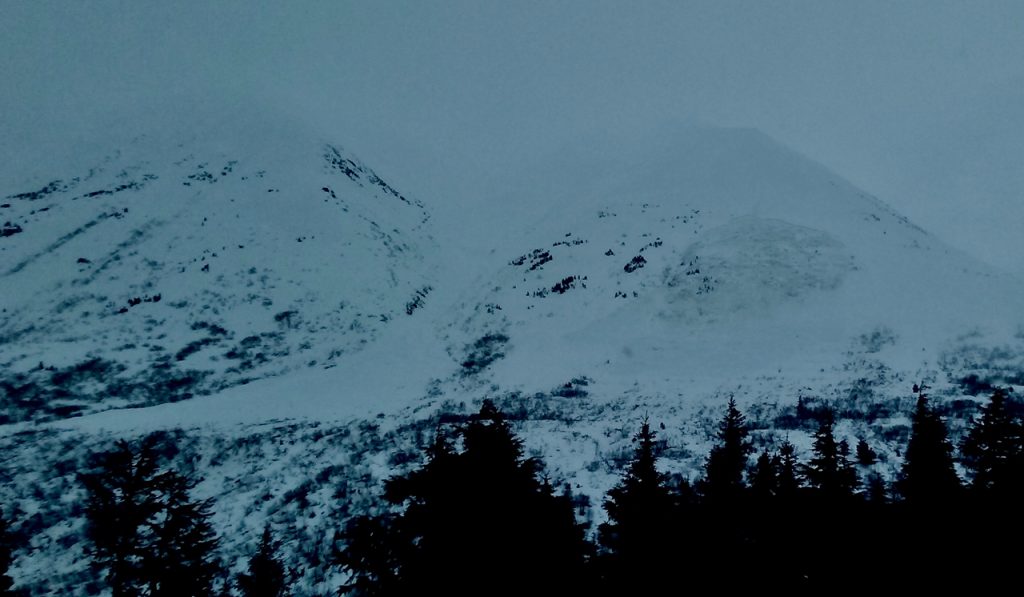 Thanks to Alex McLain for snapping this photo of a wet slab on the shoulder of Moose Mtn in the Summit Lake area (near the Hope Y). The avalanche occurred sometime between 11am and 1pm yesterday, Mar 23rd.

Yesterday:   Cloudy skies with light to heavy rain were seen below 2,500′ and wet snow above this. Just under an inch of rain was seen the Girdwood Valley and almost half an inch at Turnagain. Portage Valley was clearly favored coming in with 2.8″ of rain during the past 24-hours. Estimated snow totals at the high elevations are 8-10″ upper Girdwood Vally and 3-6″ at Turnagain Pass. Ridgetop winds were easterly in the 15-25mph range. Temperatures have decreased slightly this morning and sit at 35F at 1,000′ and in the upper 20’sF along ridgelines.

Today:   Mostly cloudy skies with light rain showers are expected over the region as one last low-pressure moves through. There is a chance we could see some breaks in cloud cover later in the day. Rain should fall up to 2,000′ with .25″ forecast (2-3″ wet snow at the upper elevations). Ridgetop winds should increase slightly to the 20-30mph range with stronger gusts from the East. Temperatures should stay in the mid-30’sF at 1,000′ and the upper 20’sF along ridgelines.

Tomorrow:   Beginning Monday a high-pressure ridge will build in for the work week. This will bring clear skies and warm temperatures at all elevations; ridgetops could see 40F. Tuesday the upper elevation temperatures should climb even higher, possibly hitting the mid 40’sF along ridgetops during the peak of the day.