Continued snowfall and wind above 2,500′ will keep the avalanche danger at HIGH in the Alpine. Storm snow avalanches are expected again today at these upper elevations. At the mid-mountain elevations, rain falling up to 2,500′ will continue to wash away the snowpack and initiate wet avalanches on steep slopes where enough snow still exists.  The avalanche danger remains  CONSIDERABLE  in the treeline band as avalanches from above may run into these mid-elevations.  Travel above treeline is NOT recommended.

It is unknown the extent of the avalanche activity yesterday at the upper elevations due to limited visibility, but we did get a photo sent in to us of wet loose avalanches on the west face of Magnum at Turnagain Pass (thank you!). These avalanches were due to rain on snow, which will be expected again today. Obscured in the clouds at the high elevations we are expecting storm snow avalanche activity to continue. The new snow is piling up on a slick hard surface left from last week – which was a hard crust likely topped with surface hoar. This set up should be producing slab avalanches and as soon as the clouds part we’ll be doing our best to take stock.

Storm totals at the mid-elevation snow stations for this soggy storm cycle:

State of the snowpack? Although the snowpack is thickening in the high mountain terrain we are loosing the little snow that was there at the mid-elevations. Before this storm there was roughly 2-3′ of snow depth at 3,300′, that should be close to doubling after today’s snowfall. At 2,200′ and getting higher … bare ground is taking over as rain is washing away the few inches of snow remaining. 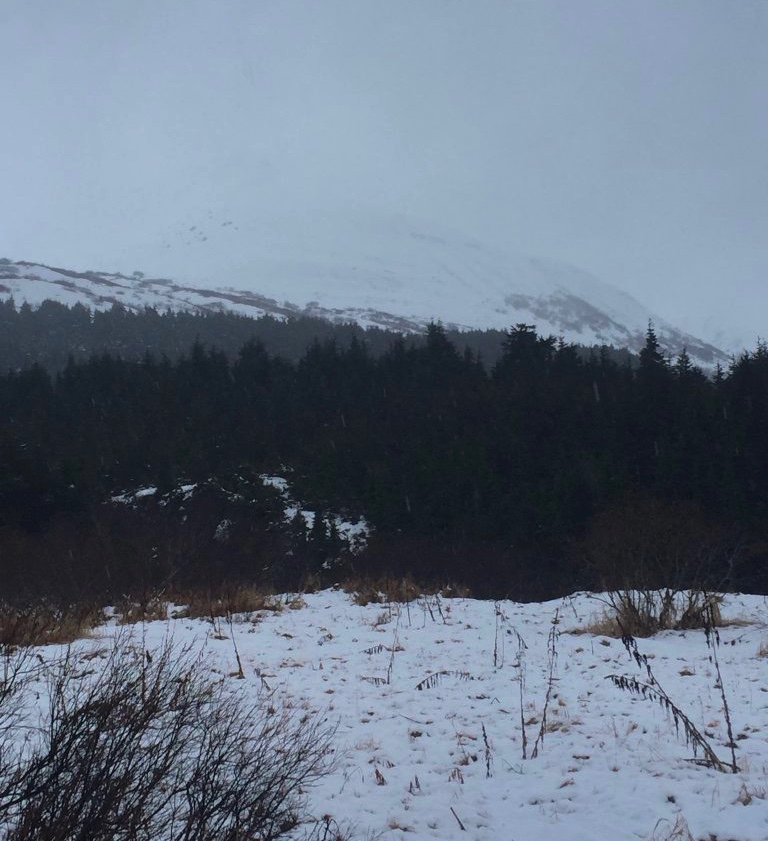 Hard to see, but there are wet loose point release avalanches on the west face of Magnum, seen from the Center Ridge trail (Photo: Jacob Swartz).