The avalanche danger is  LOW  this morning and will rise to  MODERATE  in the afternoon. Triggering a small to large wet avalanche will be possible with daily warming on sunlit aspects.  In the Alpine, triggering a slab avalanche 1-2′ thick remains possible above 3000′ on shaded aspects in areas where the snowpack is generally thinner. Give cornices extra space.

MONDAY AVALANCHE OUTLOOK:
No avalanche forecast will be issued tomorrow, Monday April 16th. The avalanche outlook will be the same message tomorrow as for today due to a similar weather pattern in the forecast.

The corn cycle has finally arrived and with it a potential for wet loose activity in the afternoons. Several nights of clear skies and freezing temperatures have formed a supportable crust adding strength to the snow in the mornings. As the day heats up and the crust melts and loses strength, the danger rises – making it possible to trigger a wet avalanche on steep sun exposed terrain features. Today’s weather looks similar to yesterday with temperatures expected to reach the mid 40F’s by early afternoon. Remember solar noon is around 2pm and warm wet snow surfaces will last through the early evening. Observations over the last two days have found the weakest wet snow conditions below 2500’ on very steep East to South aspects. There is more potential for wet snow to entrain a larger avalanche in this elevation band. Don’t let this catch you off guard if you start out in the upper elevations and the snow quickly changes as you descend. Pay attention to surface crusts as they break down and become moist. When the snow becomes wet and ‘mushy’ and your skis or snowmachine track start trenching into wet snow, it’s time to find supportable surfaces. Even a small wet avalanche could be hard to manage especially in a terrain trap. As we move away from a rain event that occurred mid-week, and water drains out of the snow, it’s becoming less likely for someone to trigger a wet slab.

Cornices: Daily warming and sunnier weather can make cornices more unstable. As always, give cornices plenty of space and limit exposure underneath them.

A melt/freeze crust exists on shaded Northern aspects to ~3000′ and was not warming by mid afternoon on Tincan. South aspects had 3-5″ of wet surface snow the alpine mid day. 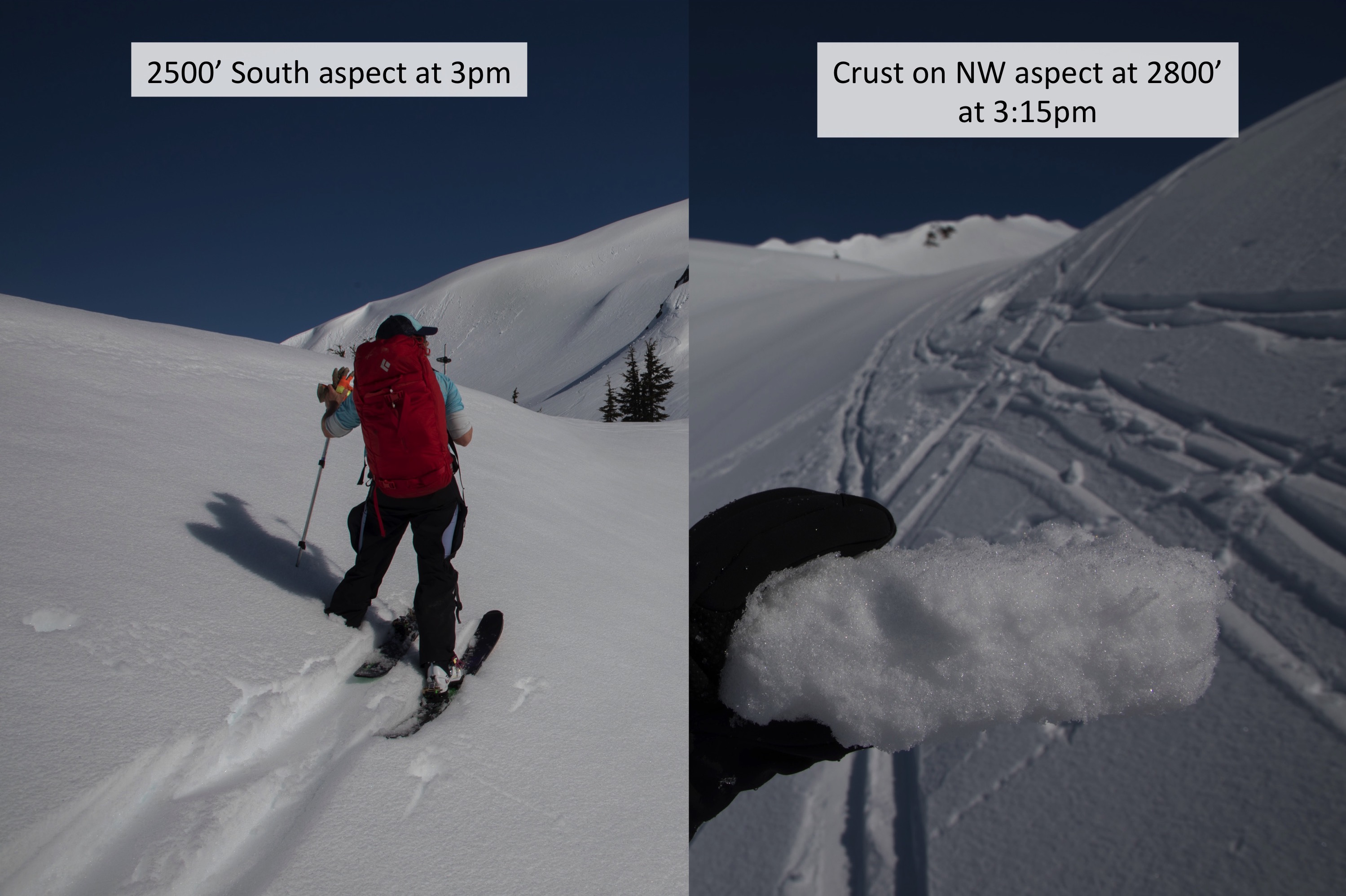 East and South aspects have been warming significantly over the last few days. Note the shiny look of the East aspects in Lynx Creek area. 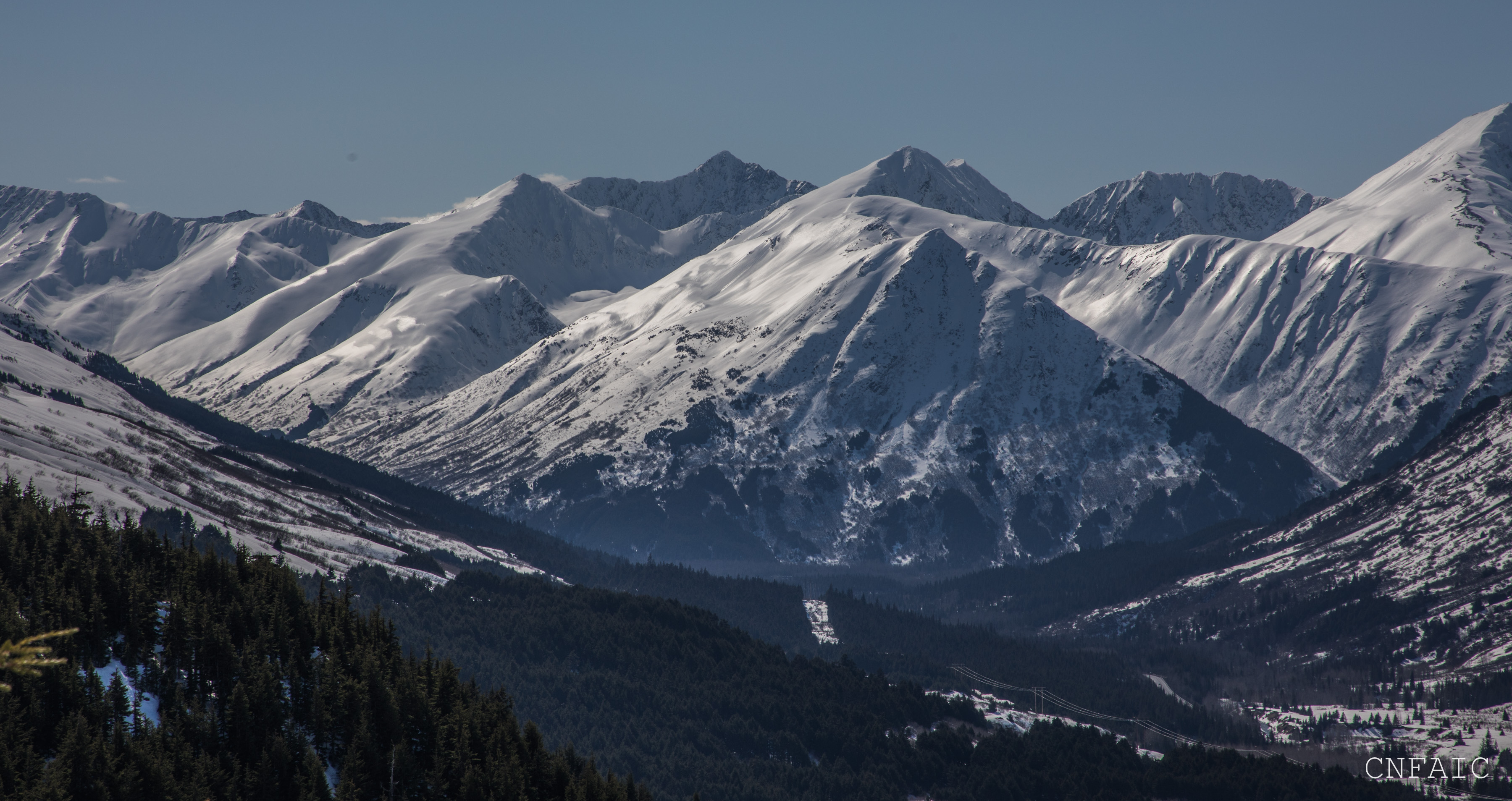 Triggering a lingering storm slab or a persistent slab 1-2’ deep is becoming less likely with time. Old weak snow (facets) buried within the top 2’ of the snowpack have been found in the upper elevations over the last few weeks. Northerly aspects above 3000’ with dry snow may harbor this set up. So far there have been no reports of any avalanche activity on these shaded slopes following the mid-week storm that ended Wednesday. However the periphery of our forecast zone is more suspect, Crow Pass area and Johnson Pass to Summit Lake, where a thinner (weaker) snowpack remains. Before committing to steeper slopes in the upper elevations, take a moment to evaluate the terrain for consequences should a slab release.

Yesterday was clear and sunny and no precipitation was recorded. Temperatures reached the low 50F’s near sea level and mid 40F’s in the mid elevations. Ridgetops were in the mid to low 30F’s during the heat of the day. Overnight temperatures dropped into the upper 20Fs to low 30F’s. Winds were light (5-15mph) from the West.

Today will be similar with sunny skies and another warm day on tap. Temperatures should again reach the low 50F below 1000′ and mid 30F’s in the upper elevations. Winds will be light (0-10mph) from the Southeast. Overnight temperatures should drop into the upper 20F’s to low 30F’s.

Monday and Tuesday look to be a mix of partly cloudy to partly sunny weather with a slight chance for a few snow flurries. If we see precipitation it will be minimal. Daytime temps are expected to be in the mid 40F’s and overnight lows in the upper 20F’s. Winds are expected to be light. Wednesday into the Thursday there is a chance for precipitation (rain and snow) as low pressure moves through the Gulf of Alaska. At this point coastal areas look to be the most impacted.