The avalanche danger remains  MODERATE on all aspects and  all elevations. On Northerly shaded aspects above 1,000′, human triggered dry slab avalanches 1-2′ thick are possible. On Southerly aspects, wet loose and wet slab avalanches are possible later in the day with daytime warming. If skies remain clear this afternoon, solar warming could increase significantly, increasing the chance for natural wet avalanches and cornice falls.

Hikers and climbers in Portage Valley:  Many popular hiking areas like Byron Glacier trail and even Portage Lake have avalanche terrain above them. Avoid being under large steep slopes where wet avalanche activity is possible in the afternoon and evening.

Spring has arrived and so has the sunshine. Yesterday was the first warm sunny Saturday of the year. We had reports of relatively small wet loose avalanches on Southerly aspects and one small dry slab on a Northerly aspect (pictured below).

Triggering a dry slab avalanche remains a concern on shady aspects. These Northerly slopes have between 8″ to 2′ of soft settled powder from last week’s snowfall. This snow fell on a variable old surface sporting everything from hard snow, facets and crusts. Bonding between the new and old snow was initially poor, but has improved over the past couple days. That said, we are still finding facets in areas under the storm snow and finding and triggering a slab avalanche remains possible. One of these was found yesterday on Tincan mentioned above. Getting your shovel out and quick hand pits are ways to help assess if the storm snow is sticking or not where you happen to be. Obvious signs on instability such as shooting cracks and whumpfing may not be present and these pockets could release further down the slope. As always, practice safe travel protocol, expose one person at a time, have escape routes planned and watch your partners.

Deep Persistent Slabs:  Buried in the middle and toward the bottom of the snowpack are old weak layers of facets and buried surface hoar. These layers formed in January and though they have not been responsible for avalanche activity for over a month or more, the springtime warm up can re-activate old layers. Although very unlikely an avalanche will release in these, it’s good to remember our snowpack has a poor structure. Most concerning areas are those with a thin snow cover such as the Girdwood Valley and the South end of Turnagain Pass and Summit Lake. 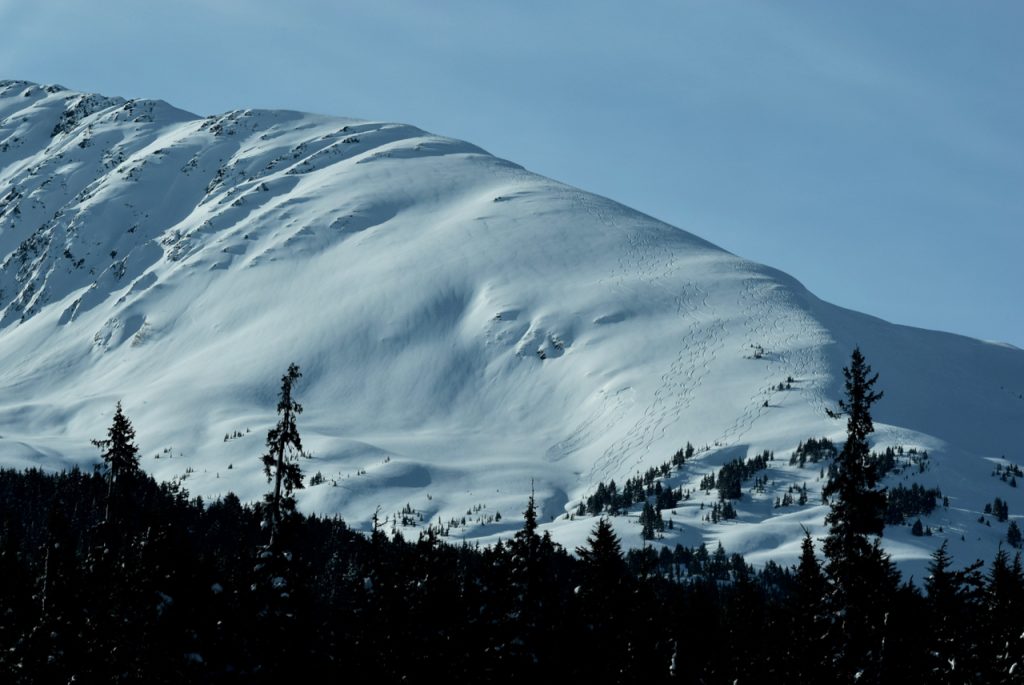 Wet avalanche activity will again be a concern later in the day on sunlit aspects. Several wet loose avalanches were seen yesterday both natural and human triggered. All these we know of were generally small and easily avoided. Today will likely be a similar scenario. Temperatures are warm this morning at the higher elevations and even with clouds expected later today, the surface crusts are likely to soften. Once the sun crust melts and the snow becomes wet and ‘punchy’ to your boot, it’s time to head to more shaded slopes. Even a small wet snow avalanche can push you around somewhere you don’t want to go.

Wet loose avalanches on Pete’s South, on the Southerly end of Turnagain Pass. 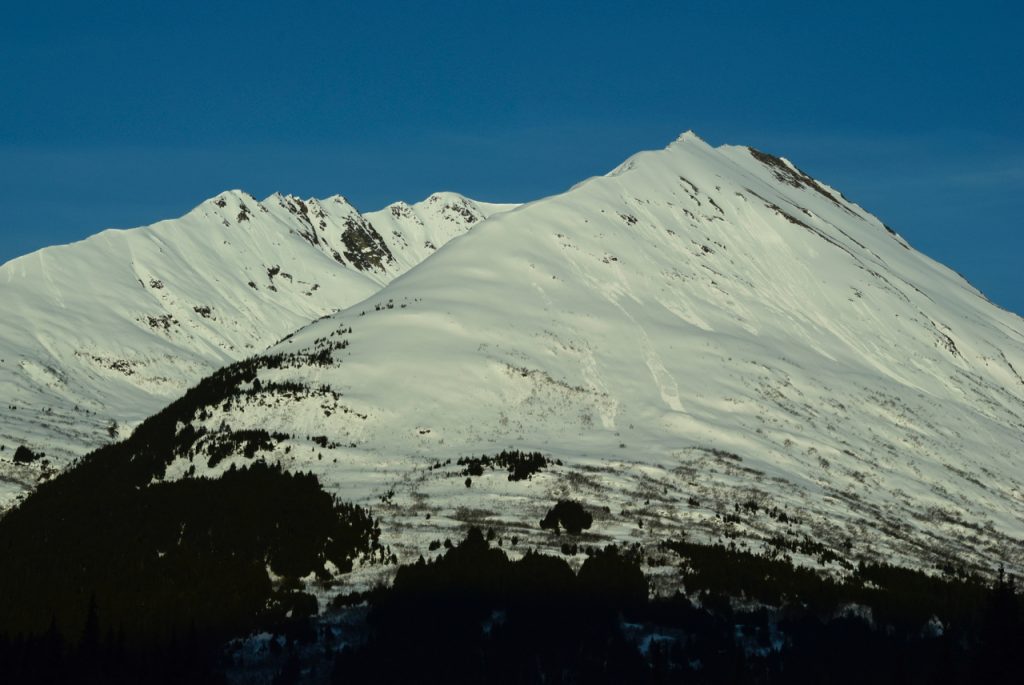 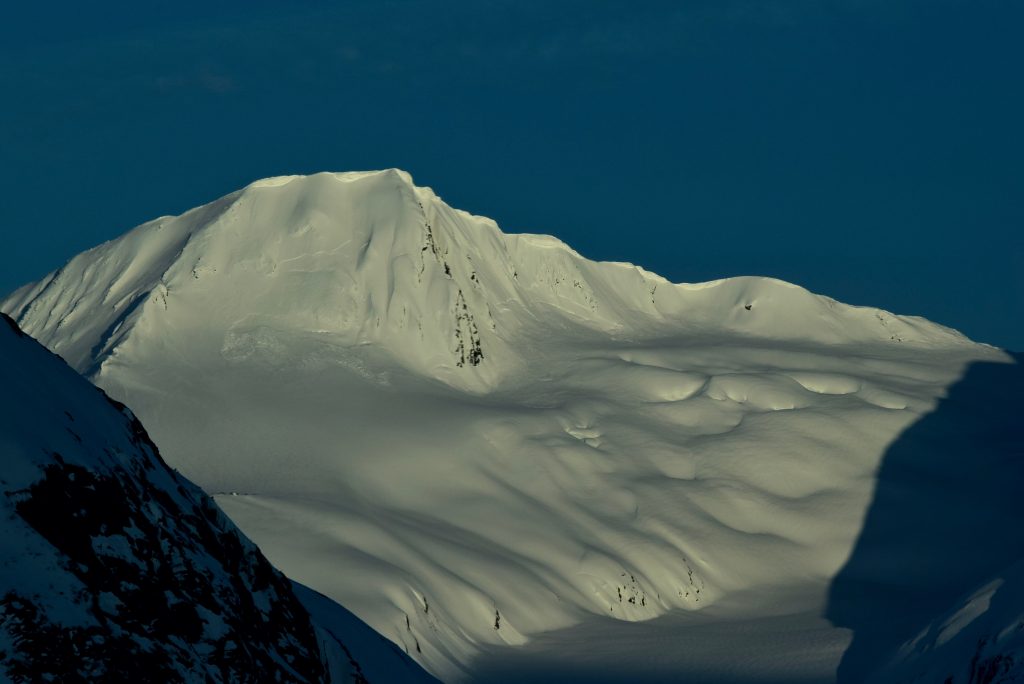 Sunny skies were over the region yesterday. Temperatures climbed into the mid 40’s F at 1,000′ and  near 30F along the ridgetops. Overnight, valley bottoms have cooled into the upper 20’s F while warm air streaming in aloft has kept ridgetop temperatures warm. In fact, the Sunburst weather station  has jumped from 27F to 32F since midnight. Ridgetop winds were light from the Northwest, in the 5-10mph range, during the day before shifting Easterly along with the warm air moving in around midnight.

Today, clear skies are expected this morning before cloud cover moves in later in the day. This is associated with a low pressure spinning in the Gulf slowly moving our way. There is a chance for a few snow flurries tonight, adding a trace of new snow (with light rain below 1,500′). Ridgetop winds will remain Easterly in the light to moderate range (5-15mph). Temperatures will again be warm. Ridgetops should see high temperatures in the 30-35F range while valley bottoms warm to the upper 40’sF.

For Monday and Tuesday, the low pressure system in the Gulf will move in and should keep skies mostly cloudy. There will be a chance for a few inches of new snow above 2,000′ and light rain below as temperatures remain spring-like.