The avalanche danger continues to be  MODERATE  above 1500′ on all aspects. Triggering a hard slab avalanche 2-4 feet thick remains a possibility. These hard slabs can be remotely triggered from the side or below. Additionally, watch for old wind slabs in steep rocky terrain and give cornices a wide berth.

Similar avalanche concerns exist in the  Summit Lake area    and other zones on the Kenai.

Triggering a hard slab avalanche 2-4’ deep is still our primary concern in the backcountry despite the quiet weather. It has been five days since the last human triggered avalanche, and over a week since a wind event triggered some large natural avalanches in our region. Traffic has been light and not many folks have been pushing into steep terrain. Hiding under the snow surface are weak layers in the snowpack formed in January that just will not go away. Without any big changes in the weather, these older layers (facets and buried surface hoar) are becoming more and more difficult to trigger. Hence, we are in a low probability, high consequence situation. The tricky part about this is, the pack appears to be stable but the chance remains for an unmanageable and destructive avalanche if a person hits just the wrong spot. These trigger spots will be in thinner areas of the snowpack near rocks or in scoured areas along ridges. Although triggering a slab remotely is becoming less likely with time, it’s not out of the question on a flat area below or next to a slope. Pay attention to runout zones and minimize your exposure on or under steep slopes. No obvious signs of instability my be present before a slope releases and it may be the 10th skier or snowmachiner onto a slope that finds a trigger point.

Today skies are expected to be mostly cloudy with clear skies through the end of the week. There is little in the way of weather that will impact our old and tired snowpack – except for the sun. We can’t forget that spring is here; even though temperatures have been relatively cool, this could change any day now. Be aware of warming later in the day on Southerly slopes – this may be difficult to assess. Melting surfaces may not be present on low angle terrain in the alpine.

Other avalanche issues to keep in mind:

Wind Slabs:  Old hard wind slabs are sitting on a variety of aspects due to prior unusual loading patterns. Steep and rocky terrain may harbor shallow windslabs sitting on old weak snow. This type of terrain (a steep unsupported slope) is also suspect for triggering a deeper slab mentioned above.

Cornices: Many cornices are quite large and teetering over. Temperatures have been cool lately but as we head into warmer, sunnier weather remember this can help de-stabilize them. As always, give cornices plenty of space and limit exposure underneath them.

In the upper elevations we have been tracking a widespread layer of facets mixed with buried surface hoar  and in the mid elevations facets are sitting on a slick melt/freeze crust. 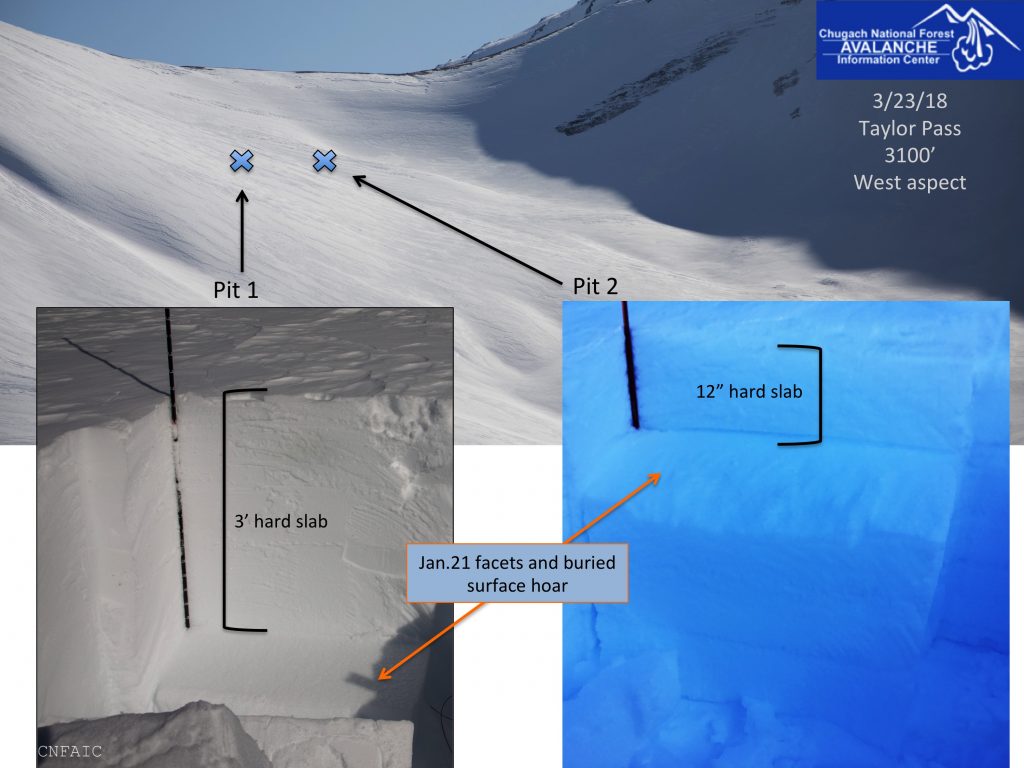 The slab on top is 2-4′ thick and very hard due to a strong Northwest wind event that ended last Thursday. This wind event caused unusual loading patterns on a variety of aspects as seen on the Headwall of Seattle Ridge. 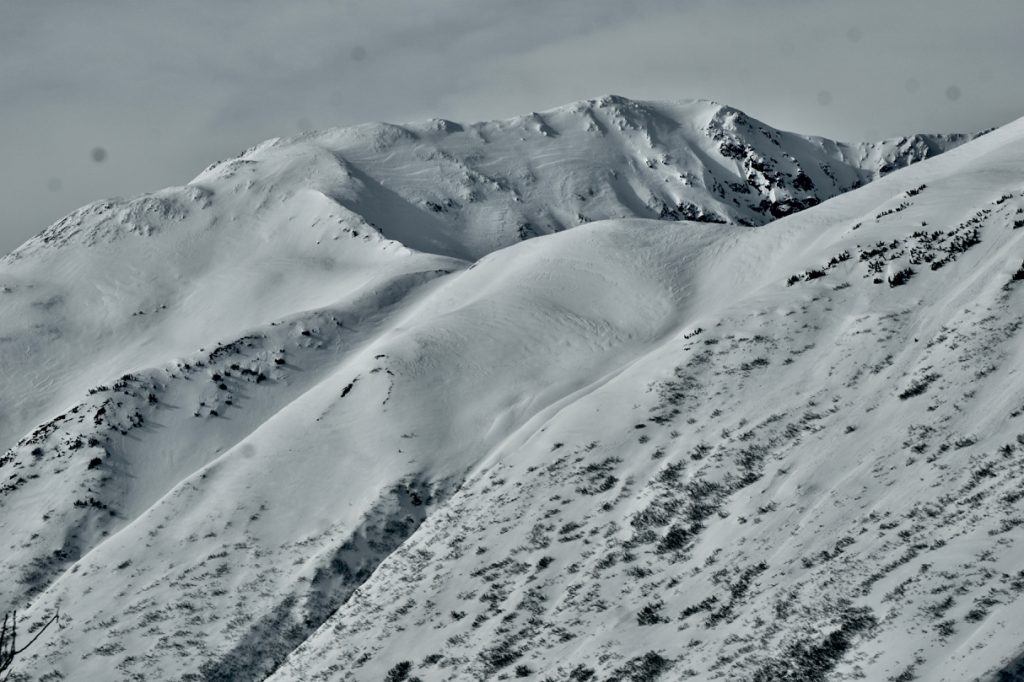 Yesterday skis were clear in the morning becoming cloudy later in the day. Daytime high temperatures near sea level reached the low 40F’s and overnight dipped just below freezing 31F.   Ridgetop temperatures were in the upper 20F’s yesterday and cooled into the low 20F’s overnight. A trace of snow was observed yesterday evening, but no measurable amounts were recorded. Ridge top winds were light and variable.

Today skies will be overcast in the morning becoming partly cloudy by the afternoon. A few flurries are possible. Winds will be light from the Northwest. Daytime temperatures may reach the mid 30F’s in the upper elevations and low 40F’s at sea level. Overnight temperatures will drop back into the the low 20F’s.

Skies are expected to be mostly sunny through the end of the week. Daytime temperatures should range from the mid-20’s to mid-30’s in the upper elevations and could reach the low 40’s F at sea level. Low temps at night will be the teens to low 20F’s. Northwest ridgetop winds near the end of the week may increase to Moderate.