The avalanche danger is  MODERATE  in the Alpine and Treeline zones where winds may be forming shallow wind slabs and adding stress to persistent slabs 1-2′ deep. If you see blowing snow or shooting cracks avoid leeward terrain features.   Additionally watch for unstable cornices along ridge lines.

For all the Hatcher Pass users out there – Hatcher Pass Avalanche Center is having their annual fundraiser tomorrow, Saturday night, Feb.10th, at the Palmer Moose Lodge!! HPAC is a growing avalanche center for a high use zone with a high number of avalanche accidents in Alaska. They need your support! Click  HERE  for details.

Today elevated Southeast winds, 10-30mph, may be moving snow around in the alpine depending on where you travel. As of early this morning Seattle Ridge has been recording wind speeds in the 10-20mph range while Sunburst had remained protected. Loose surface snow is available for transport and it will be important to monitor surface conditions and watch for blowing snow as you travel. Small pockets of newly formed wind slabs may be tender on leeward features, but more concerning will be drifting snow adding stress to a persistent slab.  Several weak layers are buried within the top 1-2’ of the snowpack, including buried surface hoar and near surface facets. Avoid smooth pillowed surfaces in steep terrain or slopes with active wind loading. Shooting cracks or ‘whumpfing’ sounds will be obvious clues that the snow is unstable.

*Deep Persistent Slab:  Weak snow can still be found near the ground in the upper elevations of our forecast area, 3,000′ – 5,000′. Although triggering a Deep Persistent Slab is unlikely, it is worth keeping in mind that poor structure does exist in places with a generally thinner snowpack. The Southern end of Turnagain Pass and Summit Lake zone are more suspect, and it wouldn’t be impossible to trigger in another part of our forecast zone with shallow snow cover. On Saturday (Feb.3) a large human triggered avalanche occurred on the East face of Twin Peaks and failed on weak snow (buried surface hoar and facets) sitting on a hard bed surface. Although the size of this avalanche is shy of 1 meter deep (a deep slab criteria,) its behavior is pretty much the same. This was a high consequence, hard to trigger avalanche where the 9th and10th skiers on a skin track found just the right trigger spot in a very shallow part of the snowpack. Luckily no one was caught or injured in this avalanche. A conservative approach would be to avoid large steep terrain with a shallow snowpack and exposed rocks.

Earlier in the week wind affected snow was observed on the Northern end of Turnagain Pass on Eddies to Wolverine. This is a good example of where a shallow wind slab or a persistent slab may be lurking. 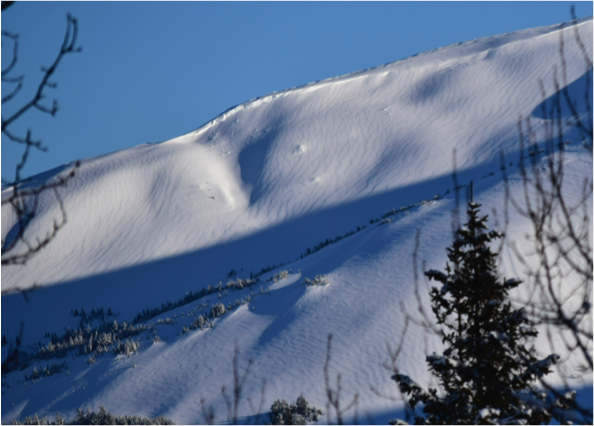 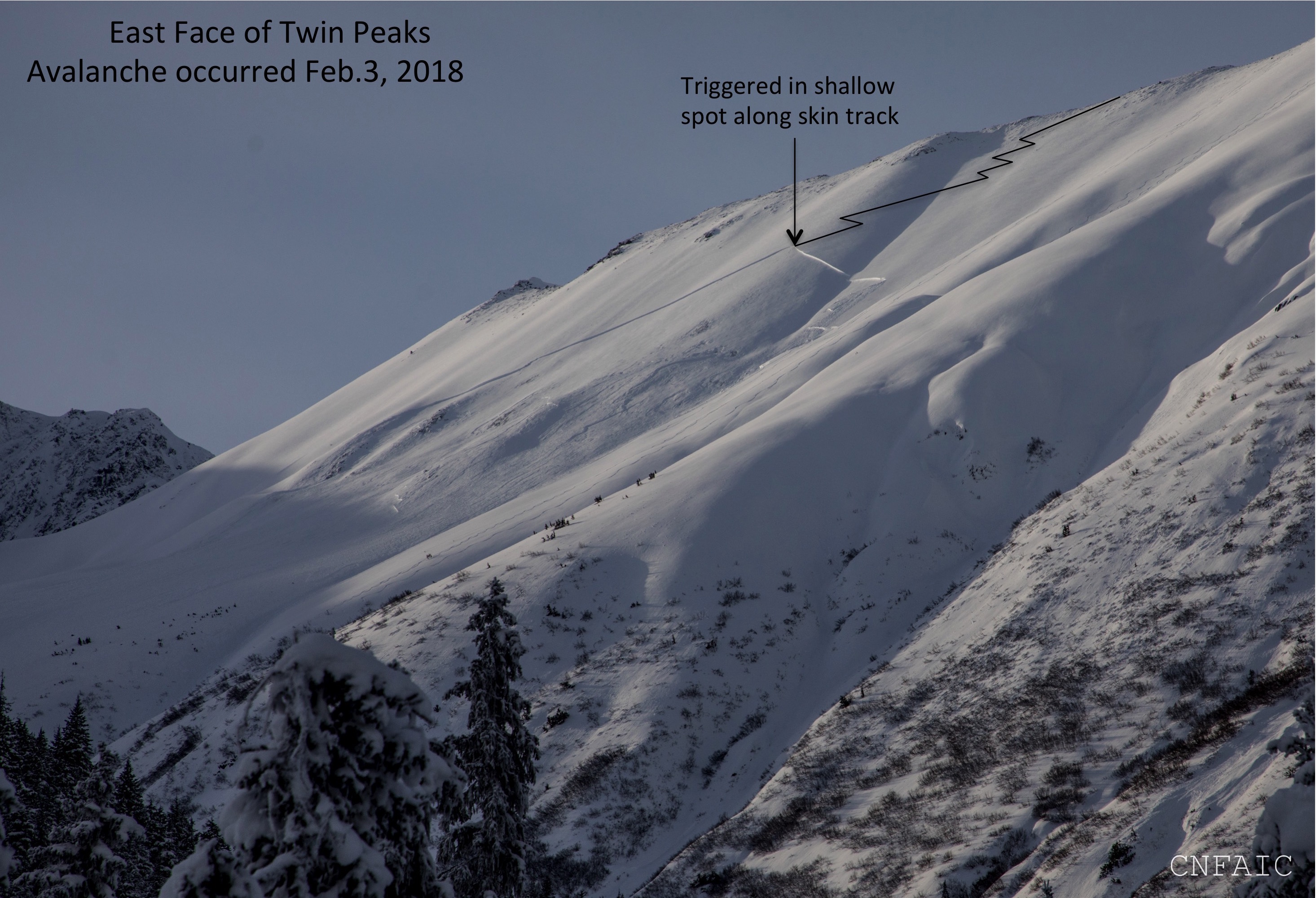 Crown profile about 30′ away from the trigger spot shows several weak layers including older weak snow near the ground where this avalanche failed, and recently buried surface hoar in upper layers. 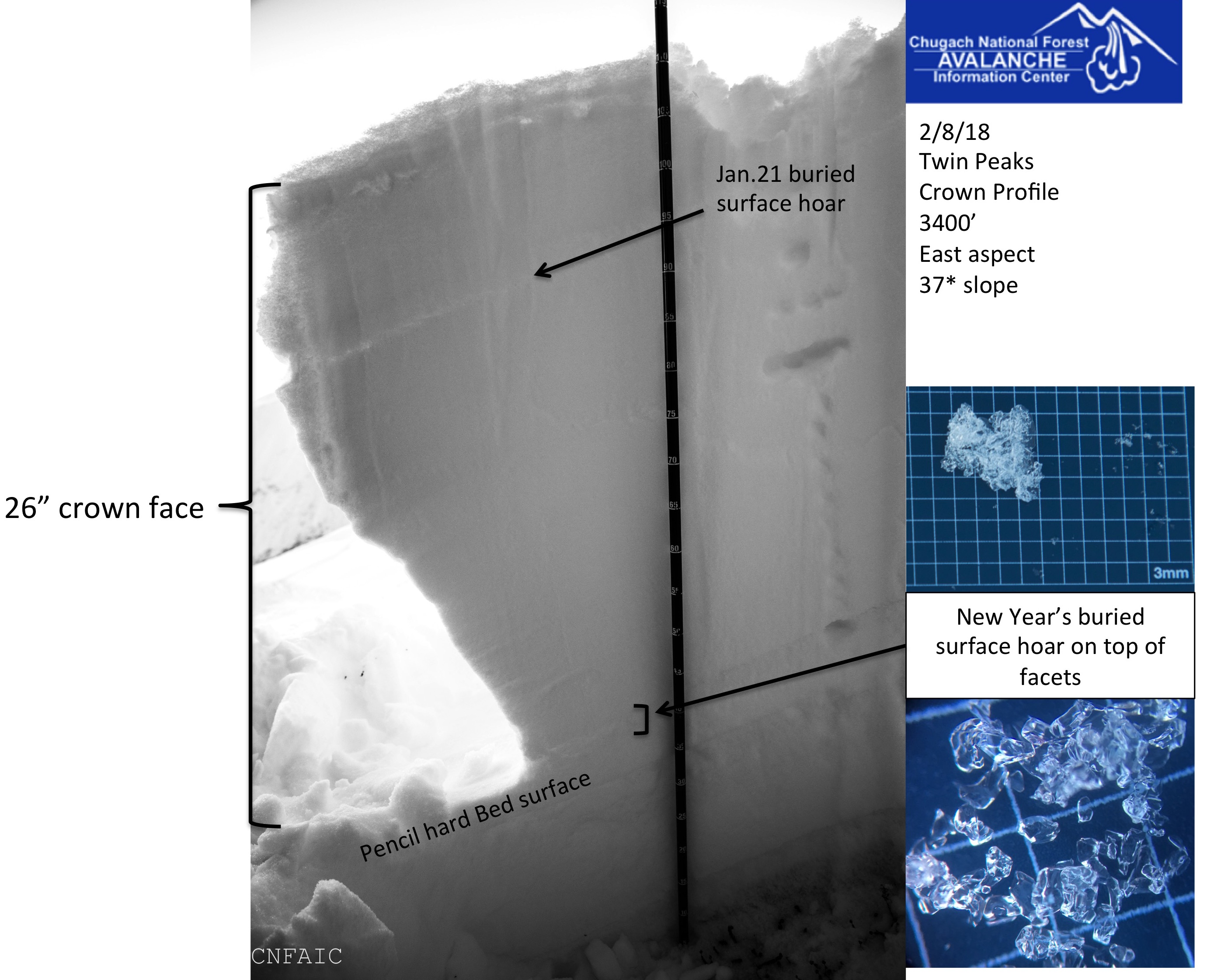 Cornices: In windy areas cornices may be seeing additional stress today. Cornices are unpredictable and can break further back along a ridge than expected. Give these features plenty of space and avoid traveling underneath them.

Loose snow avalanches ’sluffs’: In places protected from winds, expect loose surface snow to be small in volume, but could slide easily in steeper terrain with the weight of a person. Watch your ‘sluff’ and be aware of the consequences below you.

Yesterday skies were clear with some patches of valley fog. Easterly ridge top winds were light at Sunburst weather station, but increased to 10-20 mph on Seattle Ridge. An inversion has kept valley temps in the single digits, but upper elevation temps bumped up into the upper 20F’s during the heat of the day in the sun.  No precipitation was recorded.

Today clear skies will become cloudy by the evening. Southeast ridge top winds are expected to range from 10 to 30mph. Temperatures will be in the teens to mid 20F’s. No precipitation is expected today.

Overcast skies and scattered snow showers are possible Saturday with gradually warming temperatures. Sunday into Monday temperatures are expected to be in the upper 20F’s in the mountains and low 30F’s near sea level. Although much uncertainty exists in the extended forecast, rain and snow showers are possible Sunday and Monday.   Easterly winds may range from Light to Moderate.