The avalanche danger is  MODERATE  above 2,500′ for triggering a slab 1-2′ deep. Watch for cornices along ridgelines and €˜sluffs’ in steep terrain. LOW danger below 2500′ doesn’t mean No danger. Evaluate the terrain for consequences before committing to a slope.

For all the Hatcher Pass users out there – Hatcher Pass Avalanche Center is having their annual fundraiser this Saturday night, Feb.10th, at the Palmer Moose Lodge!! HPAC is a growing avalanche center for a high use zone with a high number of avalanche accidents in Alaska, they need your support! Click  HERE  for details.

Several inches of new snow fell inTurnagain Pass on Tuesday combined with elevated ridge top winds. Yesterday several small natural slabs were noted in the Seattle Creek zone and activity near Byron Glacier was also reported. Several weak layers are buried within the top 1-2’ of the snowpack, most notably the 1/21 buried surface hoar which has been responsible for the scattered avalanche activity over the last two weeks. In Portage, where 8-10” of snow fell on Tuesday, recently buried surface hoar could be an additional new layer of concern in this area.

Over the last week in Turnagain Pass, slabs have been relatively small and hard to find, considering the high volume of snowmachine and skier/rider traffic this area has seen. Don’t let old tracks fool you into thinking all these slopes are safe. If you see evidence of wind-pillowed snow or stiff snow over weak snow, be cautious in steep terrain. Snow that was once loose may have become more cohesive and ‘slab-like’ in the alpine on specific terrain features. Before committing to steep terrain, identify terrain traps like gullies, cliffs or rocks below and consider the consequences if even a small slab is released.

A thinner and weaker snowpack is more suspect in Summit Lake and the far Southern end of Turnagain Pass, where a skier triggered avalanche occurred on Saturday (Feb.3) on the East face of Twin Peaks, along the edge of our forecast zone. This avalanche stepped down into older layers of the snowpack. The party’s account can be found HERE and stay tuned for a near miss report coming soon. 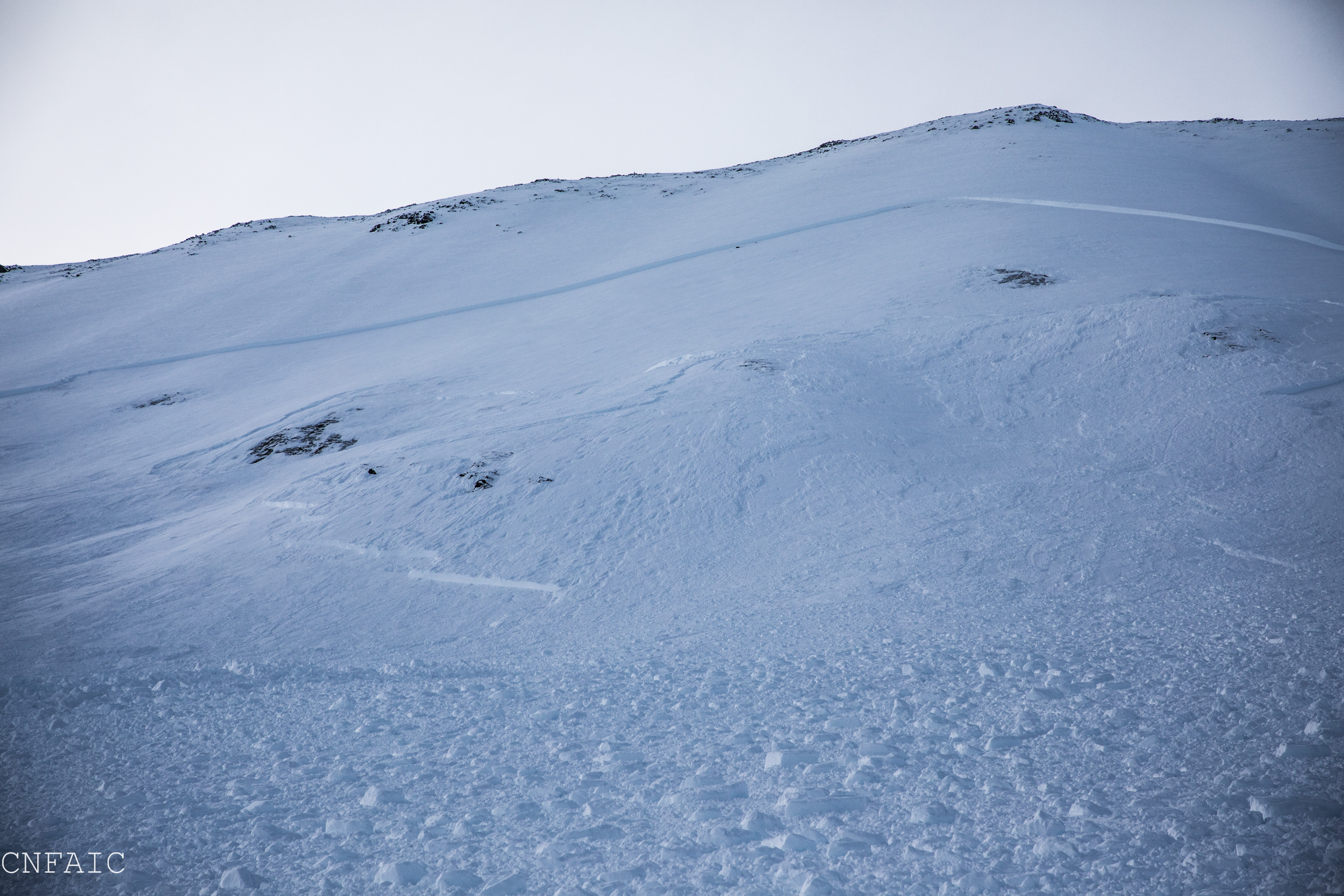 Wind affected snow was more obvious on the Northern end of Turnagain Pass yesterday. Photo of Western Bowl of Wolverine. 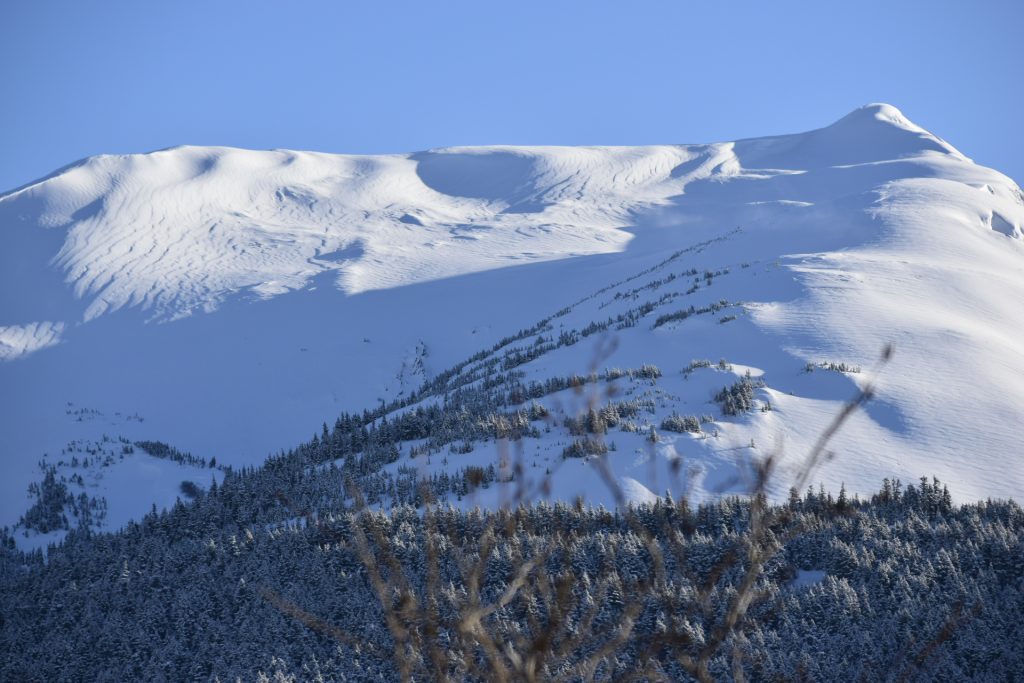 In addition to the 1/21 buried surface hoar we are also tracking a facet/crust combo between 2500’ and 3500’ that has shown propagation potential recently. 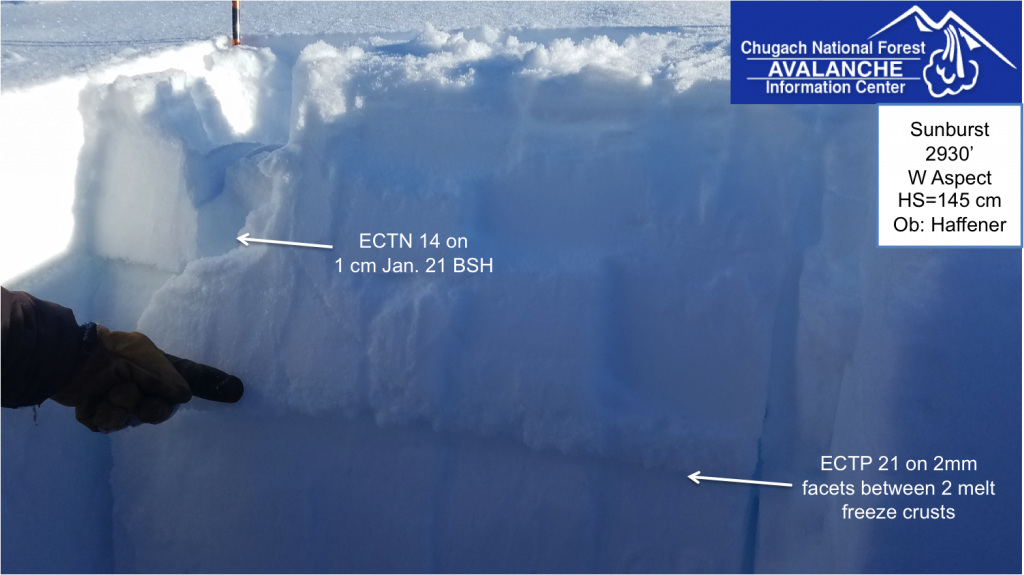 Loose snow avalanches (’sluffs’): In Turnagain Pass a few inches of loose dry snow fell Tuesday and numerous small point releases were observed yesterday. In places protected from recent winds, expect this loose snow to be small in volume, but could slide easily in steeper terrain with the weight of a person. Watch your ‘sluff’ and be aware of the consequences below you.

Cornices: Cornices are unpredictable and can break further back along a ridge than expected. Give these features plenty of space. 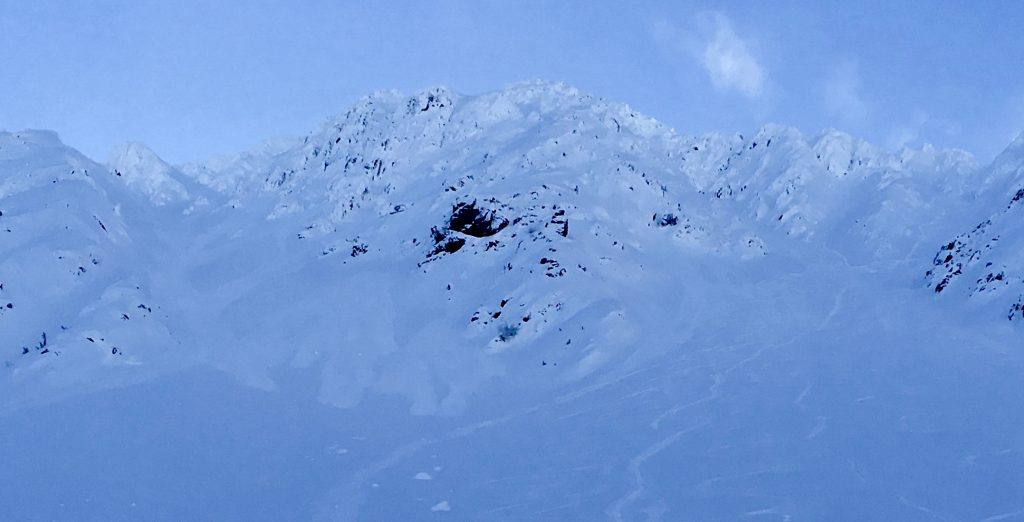 Yesterday skis were partly cloudy with some patches of valley fog. Ridge top winds were light and variable. Temps at all elevations dipped into the teens (F) with pockets of cooler air, single digits, in  some valley bottoms. In   coastal areas temps remained in low 20F’s. No precipitation was recorded.

Today expect clear skies and temperatures to increase into the mid 20F’s. Ridgetop winds will be light from the Southeast and no precipitation is expected.

Friday should be partly cloudy with increasing cloud cover in the evening. Temperatures may increase into the upper 20F’s. There is a chance for snow showers over the weekend and a possibility ridgetop winds may increase to moderate on Saturday, but there remains much uncertainty in the details of the extended forecast at this point.