A generally  LOW  avalanche danger exists in the mountains surrounding Turnagain Pass. Although triggering an avalanche large enough to bury a person is unlikely, isolated slabs 1-2′ deep can still be found in steep and/or wind loaded areas.  LOW danger does not mean No Danger.  Additionally, watch for cornices along ridgelines and sluffs in steep terrain.

*Periphery zones, such as Girdwood to Portage Valley, and Johnson Pass to Summit Lake more caution is advised where a slab could be larger and more connected.

For all the Hatcher Pass users out there – Hatcher Pass Avalanche Center is having their annual fundraiser this Saturday night, Feb 10th at the Palmer Moose Lodge!! HPAC is a growing avalanche center for a high use zone with a high number of avalanche accidents in Alaska, they need your support! Click  HERE for details.

Among the thousands of snowmachine, skier and snowboard tracks around Turnagain Pass, don’t forget that a slab avalanche could still be triggered in isolated areas. These areas are more pronounced in the periphery of the forecast zone, such as South toward Johnson Pass and Summit Lake, as well as toward Portage and Girdwood Valleys. It is the higher elevation slopes that have seen prior wind loading, or have a very thin overall snowpack that are the most suspect. Keep this in mind, especially if you find yourself pushing out into terrain not yet traveled this year.

Image on left shows Cornbiscuit near Turnagain Pass with many tracks on it without incident next to the right image of a slab triggered on Saturday in the Twin Peaks area. The Twin Peaks avalanche is on the Southern edge of the forecast zone. (Photos: left, Liz Repetto and right, Andy DuComb) 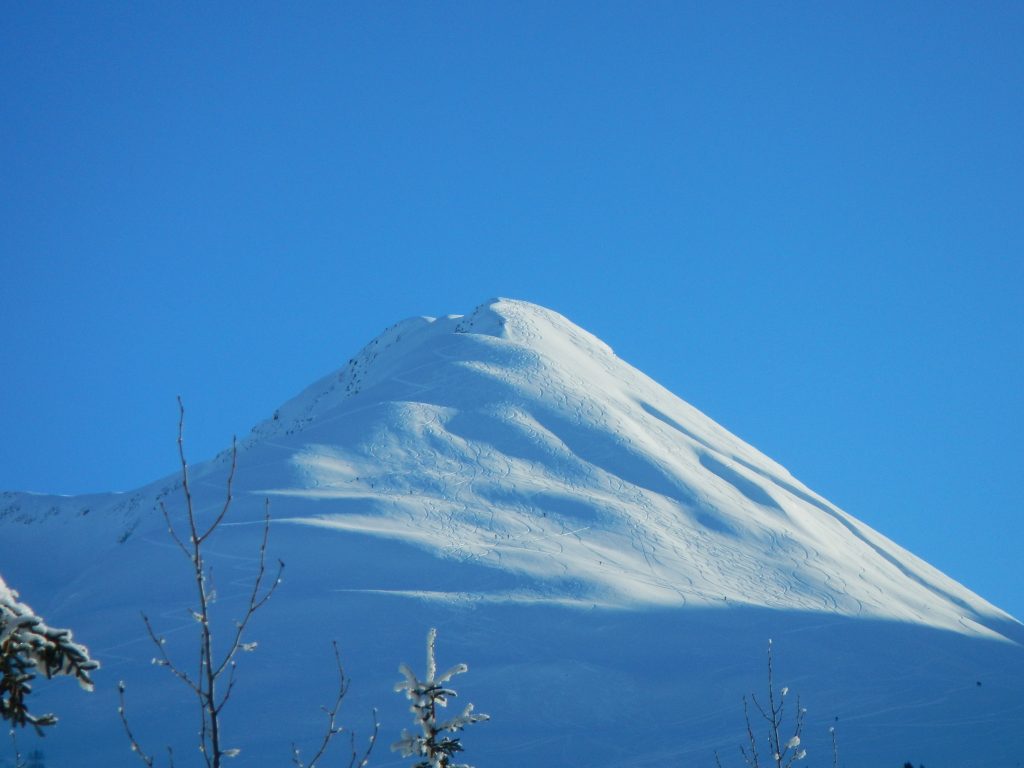 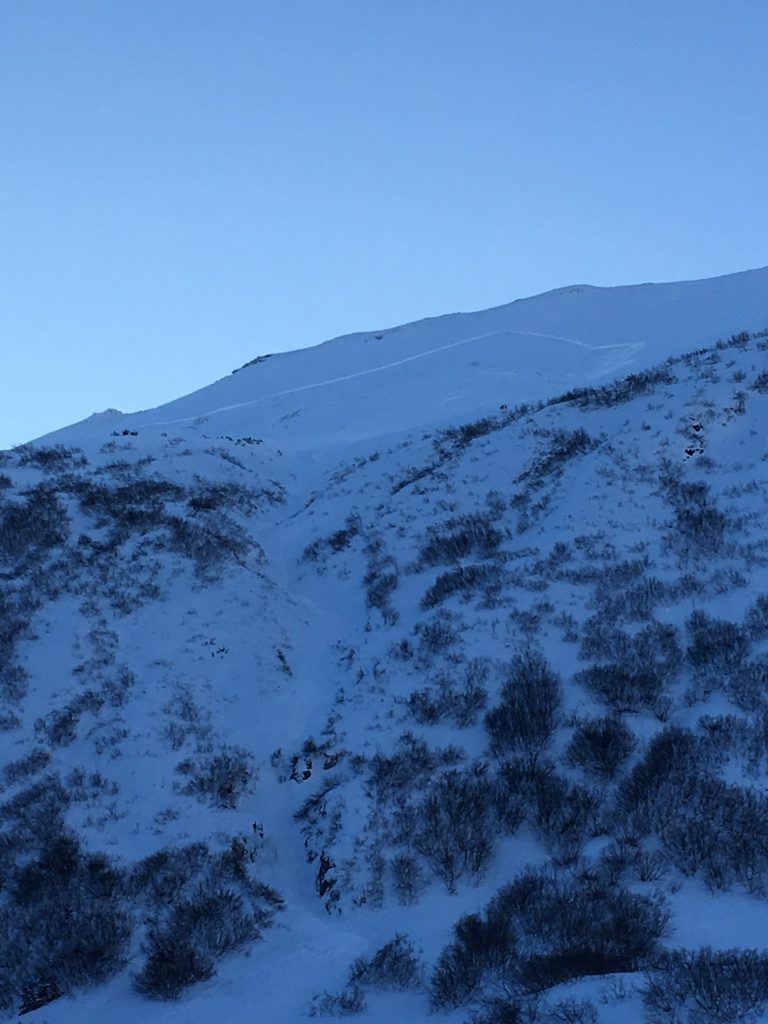 We are in a ‘normal caution’ regime at Turnagain Pass and triggering an avalanche is on the unlikely side. However, there is still snow out there that can slide, but it’s confined to isolated areas mentioned above. Below are the avalanche issues to be aware of:

Persistent Slabs:  A layer of buried surface hoar exists roughly 1-2′ deep and has been responsible for the scattered avalanche activity over the past week and a half of sunny weather. Most areas, especially in the heart of Turnagain Pass, harbor very loose snow over the buried surface hoar and only sluffs are being seen (no slab). It is the areas where the top foot or two of snow is stiffer from wind affect/loading that we need to watch out for. Also, areas where the buried surface hoar is simply deeper due to higher snowfall amounts from our last storm on January 26th, such as in the Portage Valley zone. If choosing to push into the steep and committing terrain, watch for:

–  Areas winds have affected the snow, stiffer snow over softer snow
–  Shooting cracks
–  Hand pits to see if you can find the buried surface hoar and get a block to slide off
–  Before committing to steep terrain,


identify terrain traps like gullies, cliffs or rocks below to consider the consequences if even a small slab is released

Loose Snow ‘sluffs’:  In most places the snow is very loose and ’sluffs’ easily on the steeper slopes. Watch your ‘sluff’ and be aware of the consequences below you.

Cornices:  Cornices are unpredictable and can break further back along a ridge than expected. Give these features plenty of space.

Sunny skies and light variable winds were over the region yesterday. Temperatures climbed into the mid 20’sF in the Alpine and remain there this morning. Valley bottoms warmed to the teens in many places yesterday, and have dropped back to the minus single digits this morning.

Today, skies will start clear before clouds begin to stream in mid-day, or perhaps this afternoon as a low-pressure system is headed our way for tonight/tomorrow. Ridgetop winds are expected to rise to the 5-15mph range from the East. Snowfall, up to a couple inches, is expected overnight. Temperatures will remain cold in valley bottoms today and in the 20’sF at the mid and upper elevations.

Tomorrow, Tuesday, snowfall should continue and forecast models are showing a total of 3-6″ by Tuesday evening. Temperatures will warm to around 30F at 1,000′, but should stay cold enough for snow to sea level. Ridgetop winds are expected to increase early Tuesday to the 25-30mph range from the East.