The avalanche danger is  CONSIDERABLE  on all aspects and elevations above 1500′. Dangerous wet snow avalanches below 3,000′ and large dry slab avalanches above 3,000′ could release naturally today. The mountains have just undergone a two week onslaught of heavy snow and rain and the snowpack remains unstable.  Natural large avalanches are possible and human triggered large slab avalanches are likely on slopes steeper than 30 degrees. Remote triggered avalanches from below slopes, next to and above are also possible. Cautious route-finding and conservative decision-making are essential.

Below 1000′, where little snow exists, the avalanche danger is  MODERATE  where an avalanche releasing from above could send debris through steep channeled terrain into this zone.

Scholarship  Applications due on Dec 15th.  The Friends of the CNFAIC have two scholarships dedicated to avalanche education for skiers, snowmachiners and all user groups. The funds generated to make these possible are in celebration of Rob Hammel and Amy Downing, their love and passion for the mountains, and to help others stay safe.

Avalanche Problem 1
Wet Slab
Wet Slab avalanches are the release of a cohesive layer of snow (a slab) that is generally moist or wet when the flow of liquid water weakens the bond between the slab and the surface below (snow or ground). They often occur during prolonged warming events and/or rain-on-snow events. Wet Slabs can be very unpredictable and destructive.
Likelihood of Avalanches
Terms such as "unlikely", "likely", and "certain" are used to define the scale, with the chance of triggering or observing avalanches increasing as we move up the scale. For our purposes, "Unlikely" means that few avalanches could be triggered in avalanche terrain and natural avalanches are not expected. "Certain" means that humans will be able to trigger avalanches on many slopes, and natural avalanches are expected.
More info at Avalanche.org

After two weeks of warm storms, heavy rainfall to 2,000-2,500′ and an extended natural wet avalanche cycle, cooler air has finally arrived overnight. As of yesterday, the snowpack was still undergoing a wet avalanche cycle below 3,000′. One of the most notable avalanches was a large slab the released naturally just under the CFR ridge on Tincan, pictured below. Other smaller wet slab avalanches occurred yesterday in the Tincan area along with some on Seattle Ridge. Although natural avalanches are still possible, the natural cycle was decreasing yesterday and is on a continued downward trend today. This is due to cooler temperatures beginning to freeze the surface of the wet snow and only light precipitation expected today (1-2″ snow). 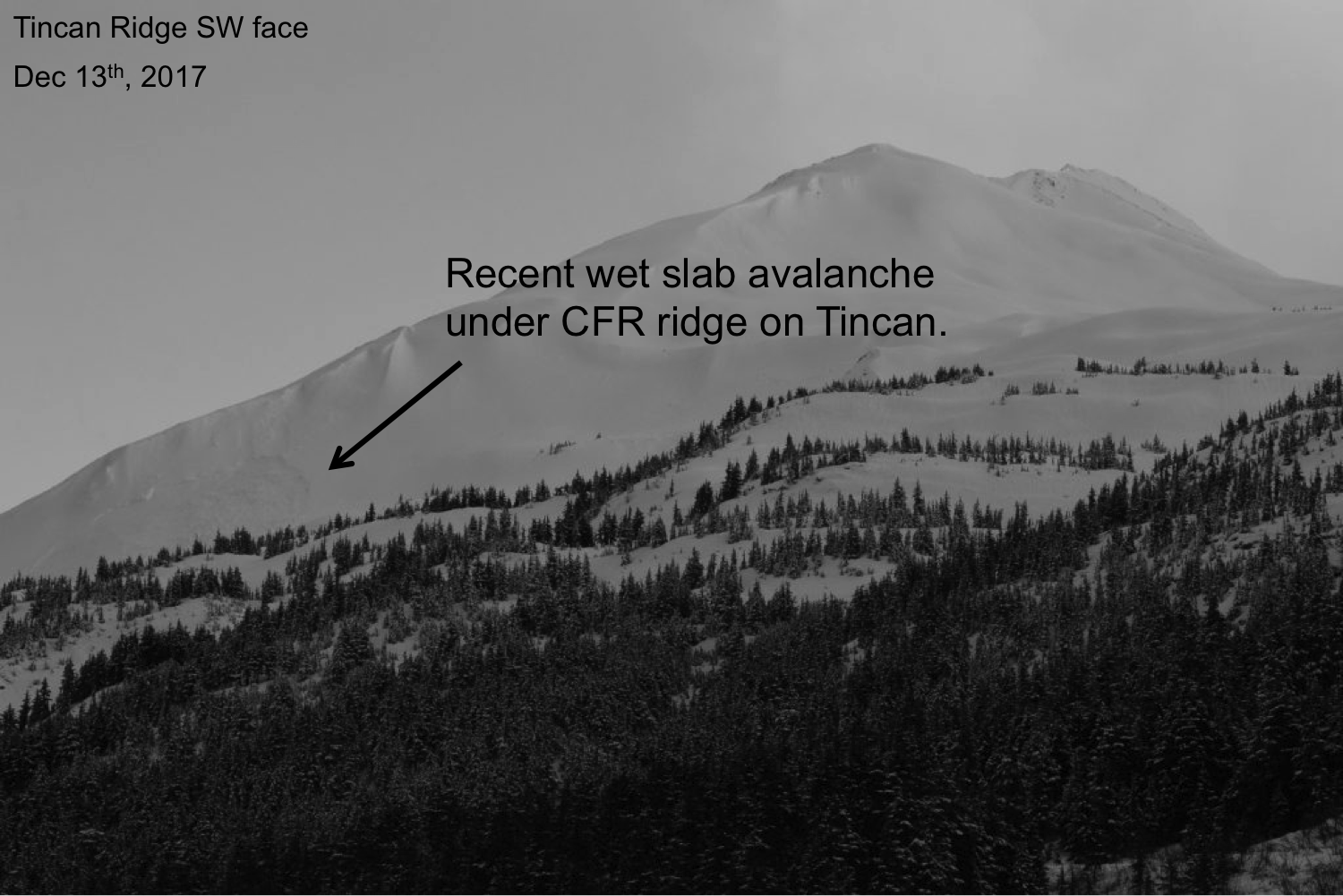 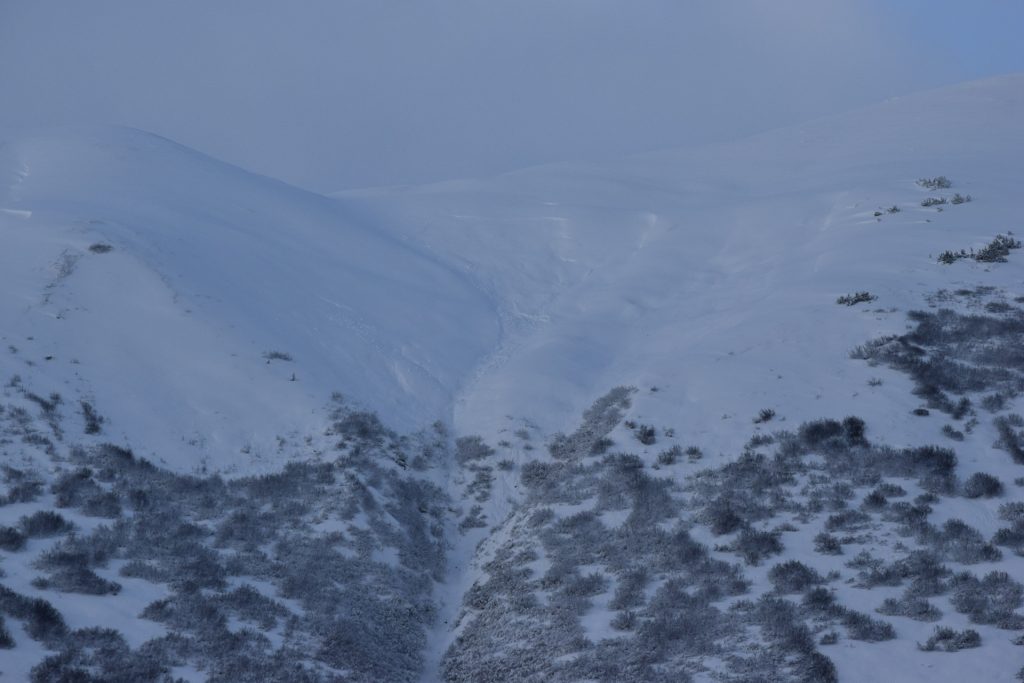 Today’s avalanche problems:
Wet slab avalanches below 3,000′ and dry slab avalanches above 3,000′ are our two main concerns, and they are big ones. We have very little information other than visual observations of the snowpack. What we know is very wet and saturated snow exists below 2,500′. Even though a surface crust may be forming with cooler temperatures last night, that will not rule out the possibility of a wet slab releasing today. These wet avalanches are extremely dangerous and even a small one can be unsurvivable. There are no tests that can be done for determining wet slab potential other than a stout refreezing of the pack stabilizing it.

Avalanche Problem 2
Deep Persistent Slabs
Deep Persistent Slab avalanches are the release of a thick cohesive layer of hard snow (a slab), when the bond breaks between the slab and an underlying persistent weak layer deep in the snowpack. The most common persistent weak layers involved in deep, persistent slabs are depth hoar or facets surrounding a deeply buried crust. Deep Persistent Slabs are typically hard to trigger, are very destructive and dangerous due to the large mass of snow involved, and can persist for months once developed. They are often triggered from areas where the snow is shallow and weak, and are particularly difficult to forecast for and manage.
Likelihood of Avalanches
Terms such as "unlikely", "likely", and "certain" are used to define the scale, with the chance of triggering or observing avalanches increasing as we move up the scale. For our purposes, "Unlikely" means that few avalanches could be triggered in avalanche terrain and natural avalanches are not expected. "Certain" means that humans will be able to trigger avalanches on many slopes, and natural avalanches are expected.
More info at Avalanche.org

Above 3,000′ moist to dry snow has fallen for two weeks now. Again, we have little information for these upper elevations at this time, but we do know prior to the storm cycle weak faceted snow with crust(s) sat near the ground. The slab on top of this weak foundation has now grown to several feet and much more in places. This presents a deep slab problem and will be guilty until proven innocent. In addition to this, storm slabs, wind slabs and cornices are all concerns in the recent storm snow.

As you can see, for today, conservative route-finding will be essential considering the myriad of avalanche problems and the potential for large avalanches.

Yesterday was a break in the heavy rain and skies were generally overcast. During the morning hours, .6″ of rain fell in the Girdwood Valley and around .3″ at Turnagain Pass before skies cleared. Ridgetop winds were moderate to strong from the East and have diminished overnight, although both the Sunburst and Seattle Ridge weather stations are not reporting we can look to the  Max’s mtn wind data to give us an idea. Temperatures that were very warm during the day (mid 40’s at sea level and 30F at 2,500′) have decreased overnight and are sitting near 32F at sea level and the upper 20’s at 2,500′.

For today, Thursday, light precipitation is on the way as a weak low pressure system spins to our East. Forecasted snow amounts are small – an inch for today and another inch for tonight. The good news is  temperatures stay cool and the snow line should fall to 1,000′ and possibly lower!  Winds should be light to moderate from the North and West today before picking up tonight from the same direction tonight.

Looking ahead, a larger low pressure will bring another round of precipitation Friday afternoon through Saturday. This system looks to wrap in colder arctic air and snow should fall to 1,000′, and possibly sea level. This system may favor East Prince William Sound and snow amounts in our area may be small. Stay tuned on tomorrow’s forecast!

Glimpse of the Tincan meadows 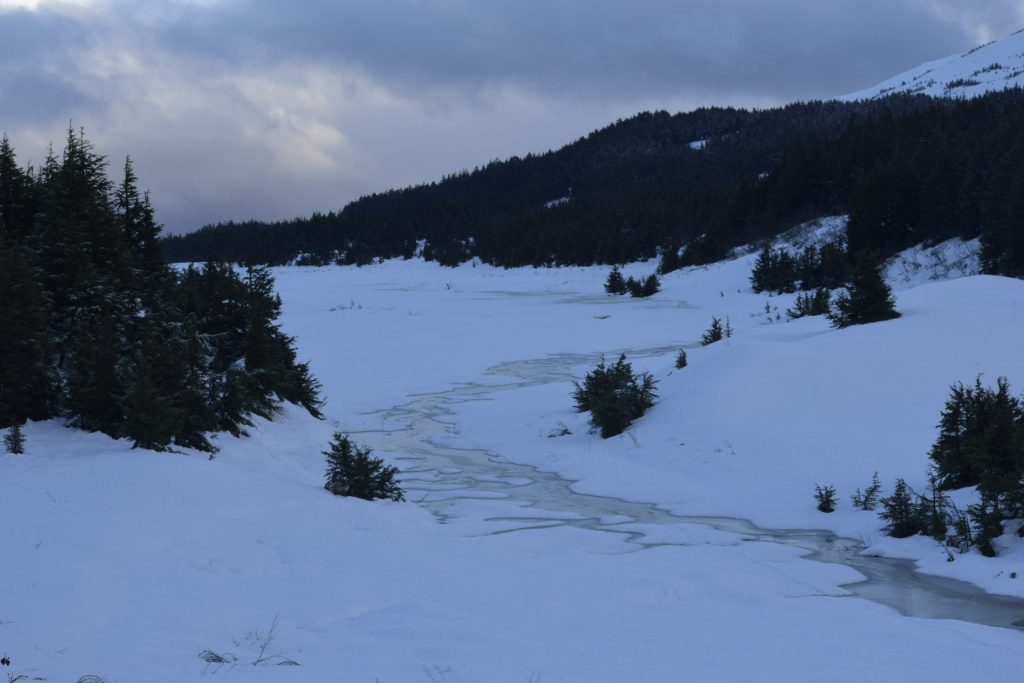 * Sunburst weather station is down due to loss of battery power.
** Seattle Ridge anemometer is rimed and not reporting.