The avalanche danger is  CONSIDERABLE on all aspects and elevations above 1500′. Recent storms have loaded a weak snowpack.  Triggering a slab 2-4+ feet could release on slopes steeper than 30 degrees and remote triggered avalanches are possible. Cautious route-finding, conservative decision-making are essential today.

Below 1000′, where little snow exists, the avalanche danger is MODERATE where an avalanche could run into steep channeled terrain.

Yesterday’s benign weather and patches of clear skies allowed for a good look around Turnagain Pass to inventory the results of Thursday’s storm. Evidence of some natural avalanche activity could be seen in steep channeled terrain, but many slopes still remain intact. Incremental loading from multiple storms over the last two weeks has buried a reactive layer of weak faceted snow near the ground. Facets have been found above and below a melt/freeze crust near the ground that is acting as a slick bed surface. This poor structure appears to be widespread both in the middle and upper elevations throughout Turnagain Pass and Girdwood. Last week when the slab was thinner observers reported “whumpfing” sounds on a daily basis including a very loud collapse that remote triggered two avalanches on Tincan, one on each side CFR ridge. Today triggering a large propagating avalanche is likely in avalanche terrain, especially in places where the snow pack is thinner and easier to penetrate the weak layer.  Keep in mind that the Northern end of Turnagain Pass has seen heavier precipitation and higher snow totals in the alpine compared to the Southern end of Turnagain Pass. This means that triggering an avalanche may be easier in places like Sunburst, Magnum or Cornbiscuit that have less snow. Triggering an avalanche could propagate an entire slope releasing to the ground and running the entire slide path. The big take home message is dangerous avalanche conditions exist and there is limited info beyond Tincan. Remember this is not an avalanche problem that can be out smarted or easily managed. Avoiding all runout zones and avalanche terrain steeper than 30 degrees is essential today.

A test pit at 3100′ yesterday revealed weak faceted snow below and above melt/freeze crusts formed in October. 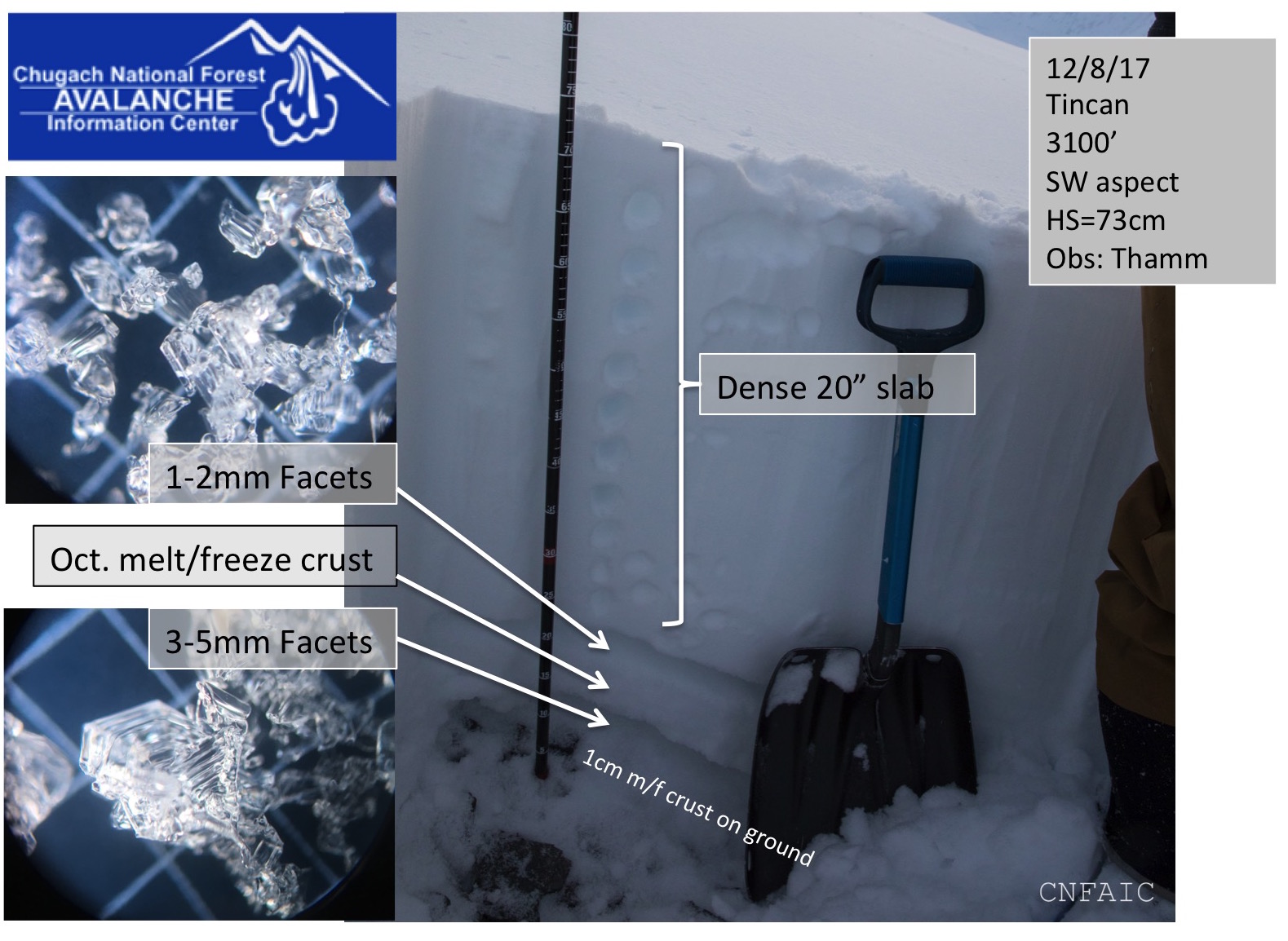 Debris at the bottom of steep channeled terrain on the North side of Tincan. New debris was also seen in Todd’s run that wasn’t there before the Thursday storm. 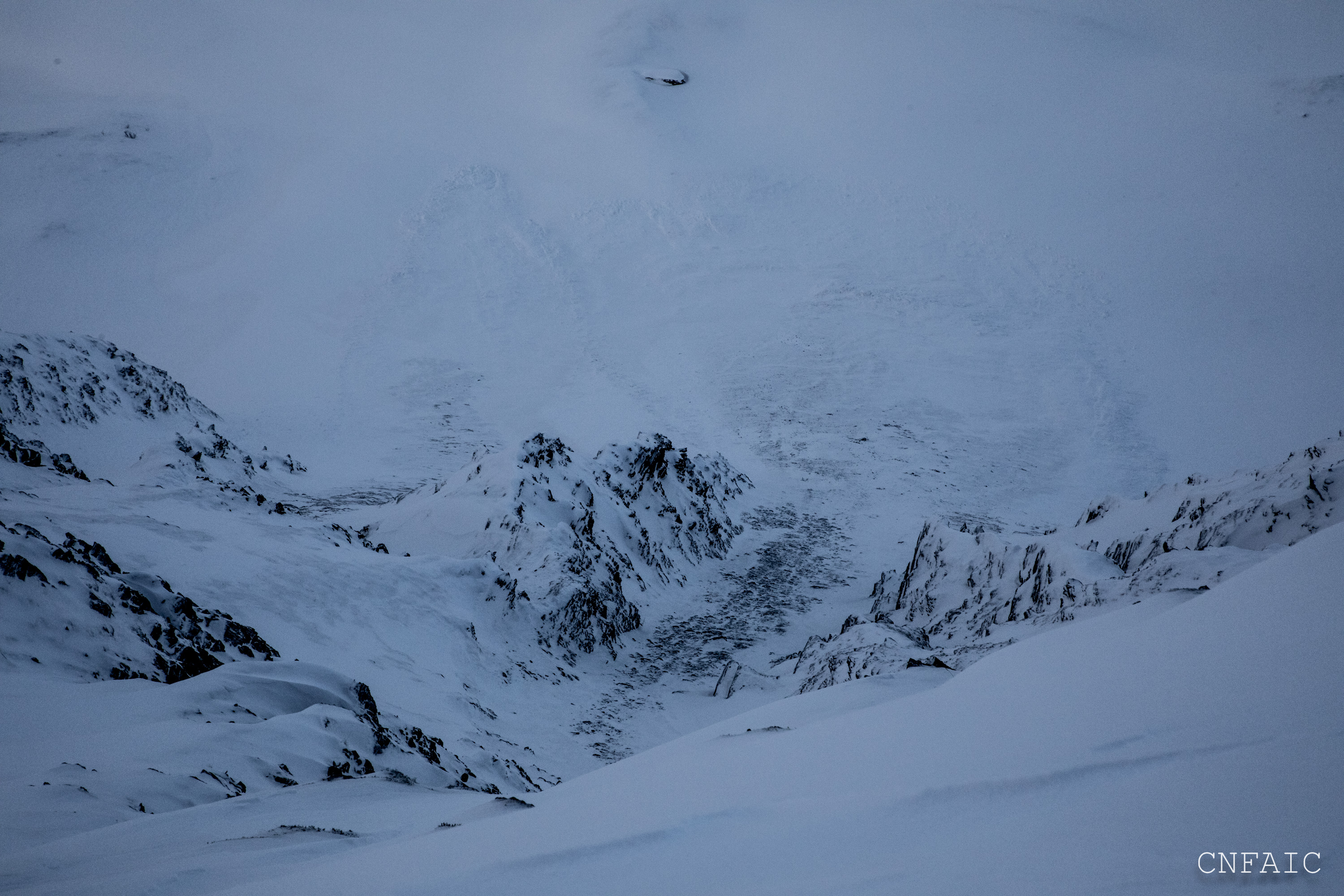 An avalanche seen yesterday that likely released mid to late storm on Cornbiscuit Thursday. Cornbiscuit is a good example of where the snow pack is thinner and could be easier to trigger a persistent slab. 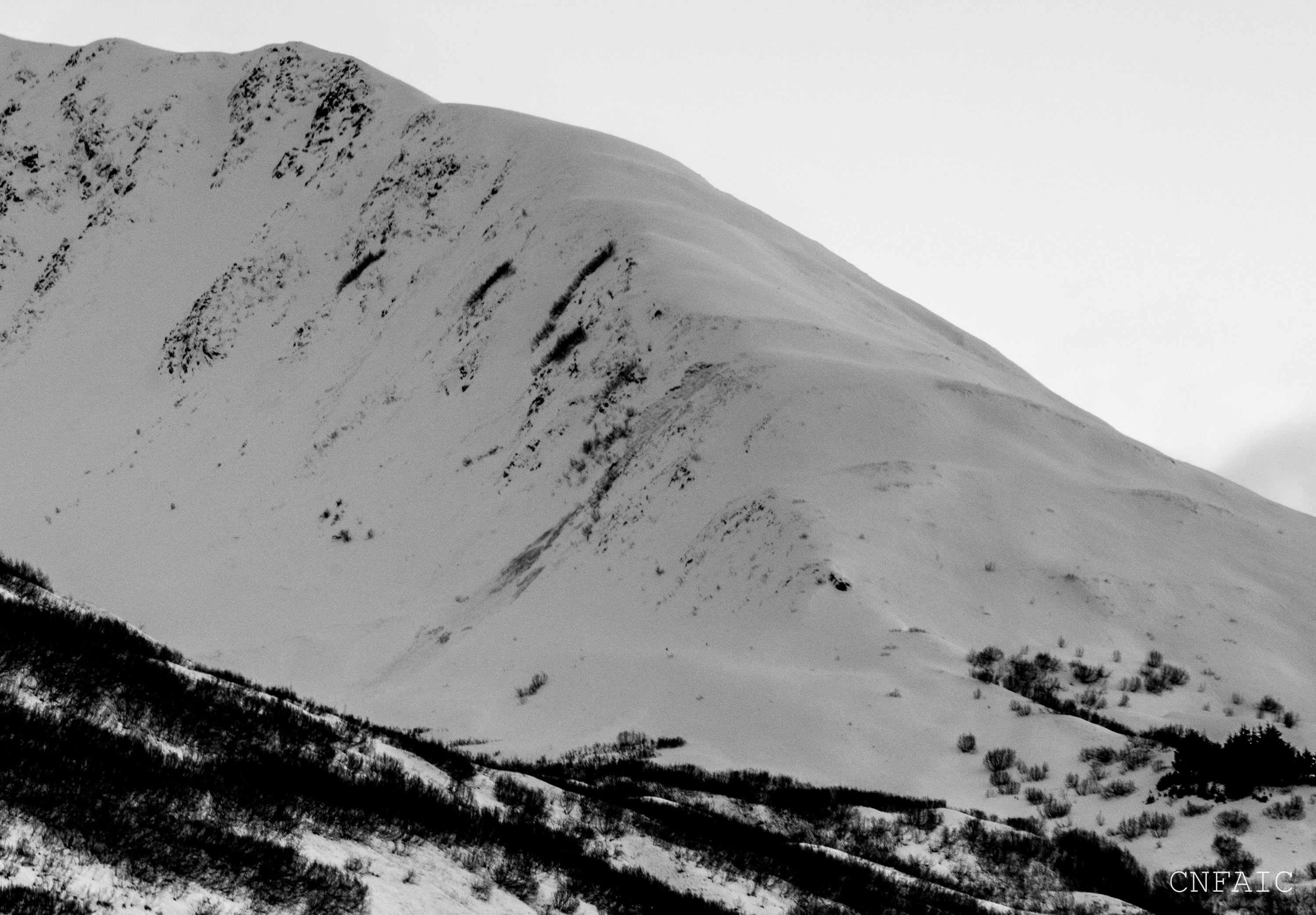 Strong Easterly winds this week have loaded leeward aspects, cross loaded many gullies and loaded corniced ridges. Human triggered wind slab avalanches or cornice falls are likely, but what is more of a concern is the potential for one of these to trigger a much larger and dangerous persistent slab avalanche as discussed above.  AGAIN today is not the day to be pushing into avalanche terrain!

Yesterday clear skies allowed for a superficial surface crust to form to 2500’. Today as temperatures rise above freezing at ridgetops and clouds move overhead, expect this crust to start breaking down. Wet loose avalanches could occur later in the afternoon with the arrival of rain showers. Pay attention to snow conditions becoming wet and avoid terrain traps or steep terrain features. Don’t forget above freezing temperatures is a red flag warning to avoid avalanche terrain.

Yesterday skis were broken with patches of blue sky in the afternoon and evening in Turnagain Pass. Temperatures remained above freezing at 1000′ and averaged 28F near ridgetops. Overnight temperatures have been on a steady incline and have reached 30F at Sunburst Wx Station (3800′) and 34F at Seattle Ridge Wx Station (2400′). No new precipitation was recorded in Turnagain Pass. Winds were light from the East 5-15mph yesterday and have increased to 15-30mph from East this morning.

Warm, wet and windy weather pattern is expected throughout the week as a series of low pressure systems continue to impact our region. Sunday evening through Monday, another strong storm is on tap and should bring strong winds, above freezing temps and a mix of rain and snow in the upper elevations.