Standard uptrack to above Common Bowl, 3200′ on SW ridge. We could see evidence from Thursday’s storm of recent avalanches on North aspect of Tincan and Sunburst. There were a few groups out today that headed to the top of Common Bowl and none reported any whumpfs today.

Superficial melt/freeze crust to 2500'. An inch of loose snow was found onto of this breakable surface crust above 2000'.
Above 2500' variable wind affected snow- supportable and unsupportable wind harden layers mixed with patches of softer snow.

Total height of snow in the alpine ranged from 30cm to 170cm. We probed a lot at this elevation band and could feel the crust near the ground almost everywhere we probed. We intentionally dug a pit in a thinner area, ~ 2 feet deep near the skin track just below the Ridge. Our pit was at 3100', SW aspect, 20 degree slope. Tests: CTC, CT11, ECTP18, ECTP13 failing 65cm below surface on loose large grain facets below Oct. melt/freeze crust. These facets were either sitting directly on the ground or on a thin deteriorating melt/freeze crust on the ground. We also had failure without propagation above the Oct. melt/freeze crust on a layer of 4F hard facets; ECTN14. Its important to note that we didn't completely isolate the melt/freeze crust in this test. See video and photo diagram for more details. The slab density was pencil hard gradually becoming 1Finger hard. Small 3mm buried surface hoar was also found 25 cm below the surface, but did not fail in any of our tests. 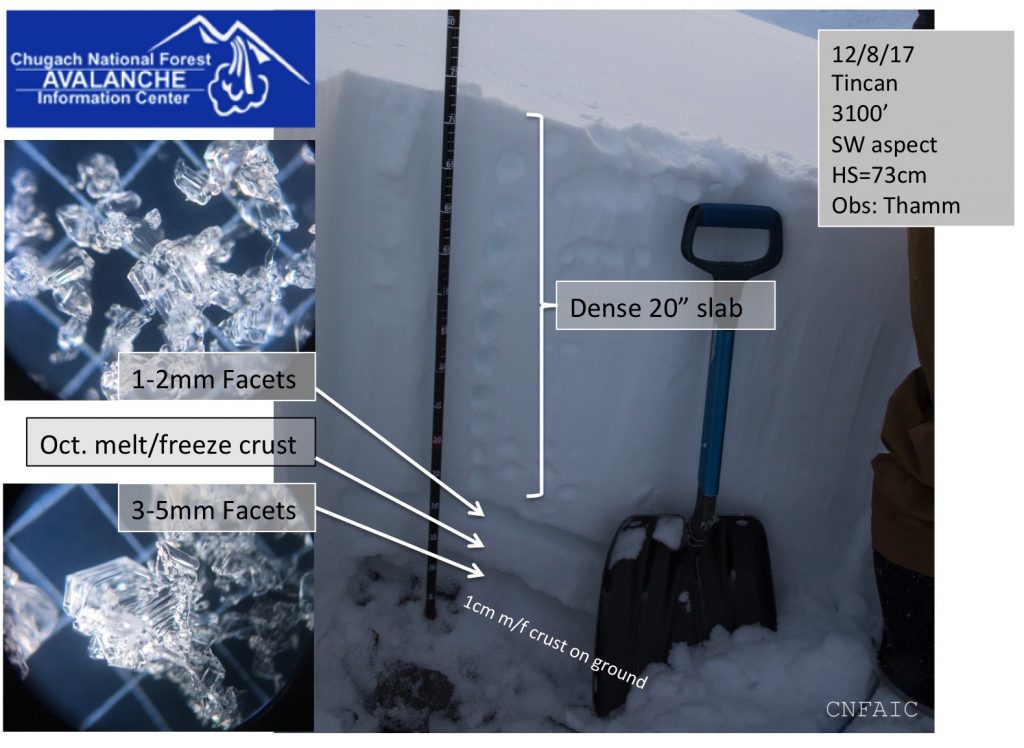 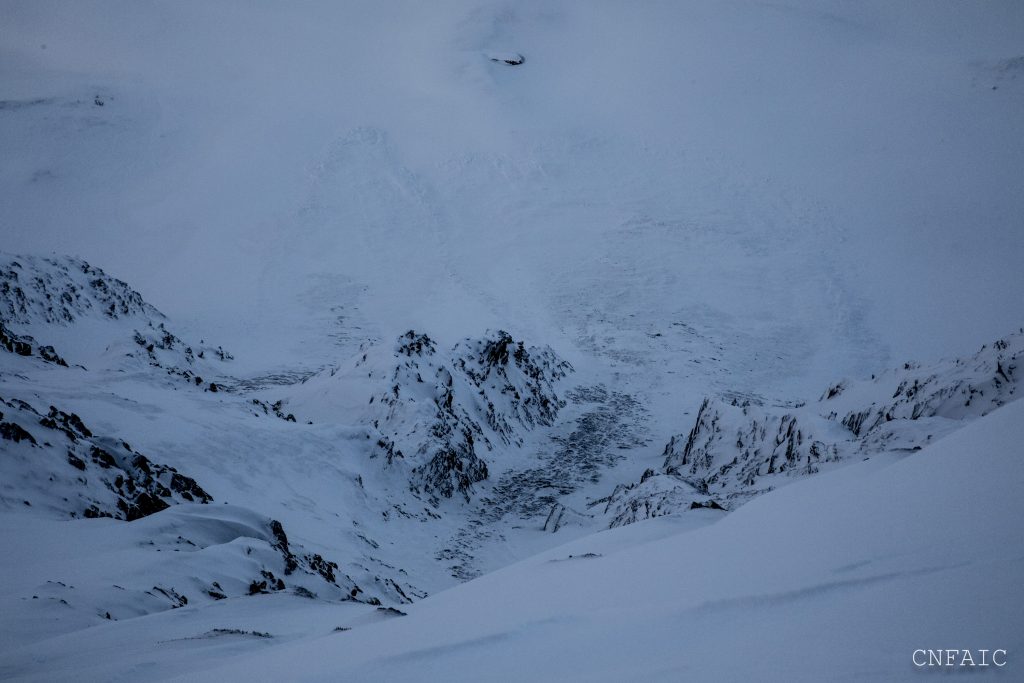 Debris at the bottom of steep Rocky terrain on the North side of Tincan as seen from 3200' on the ridge. 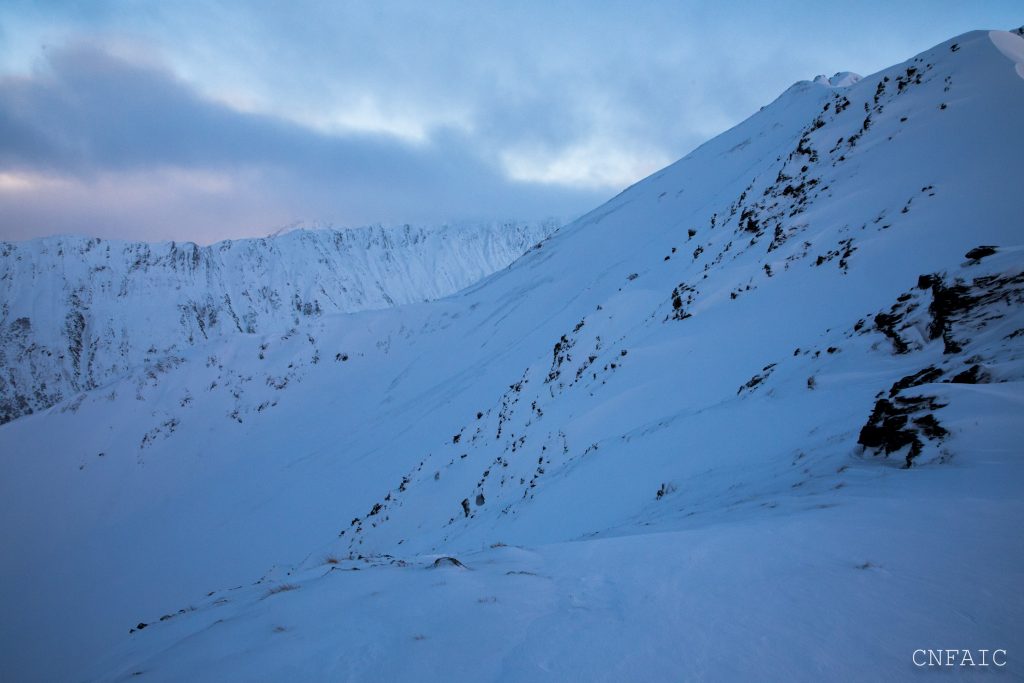 Although its hard to see in this photo, parts of Todd's bowl avalanched from Thursday's storm 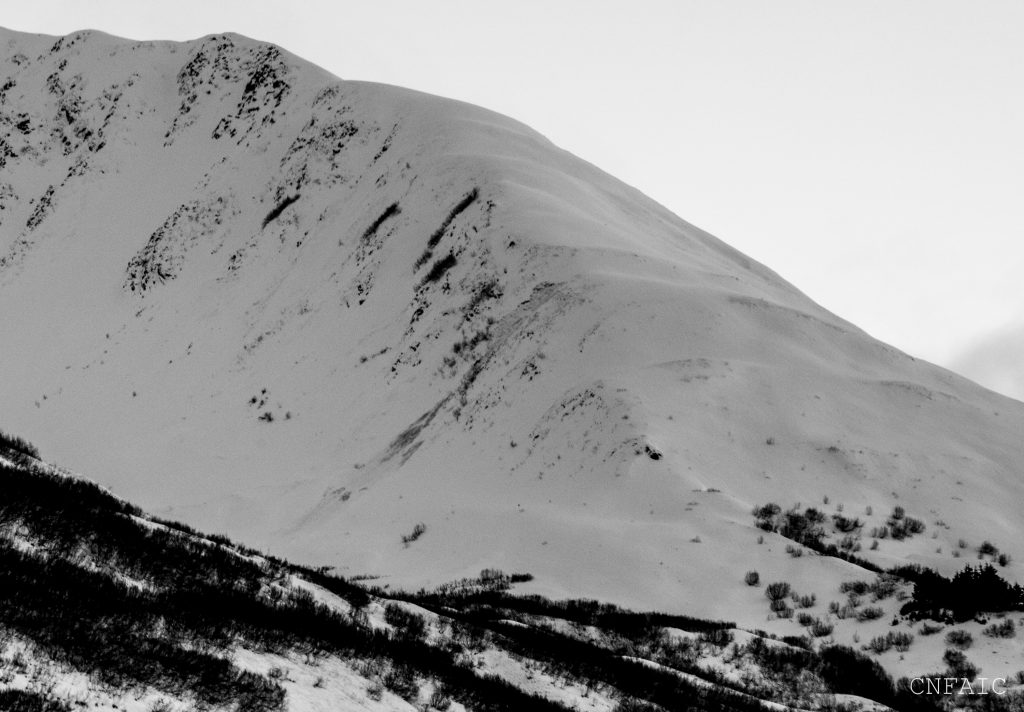 Cornbiscuit with a recent small avalanche in steep Northern terrain. 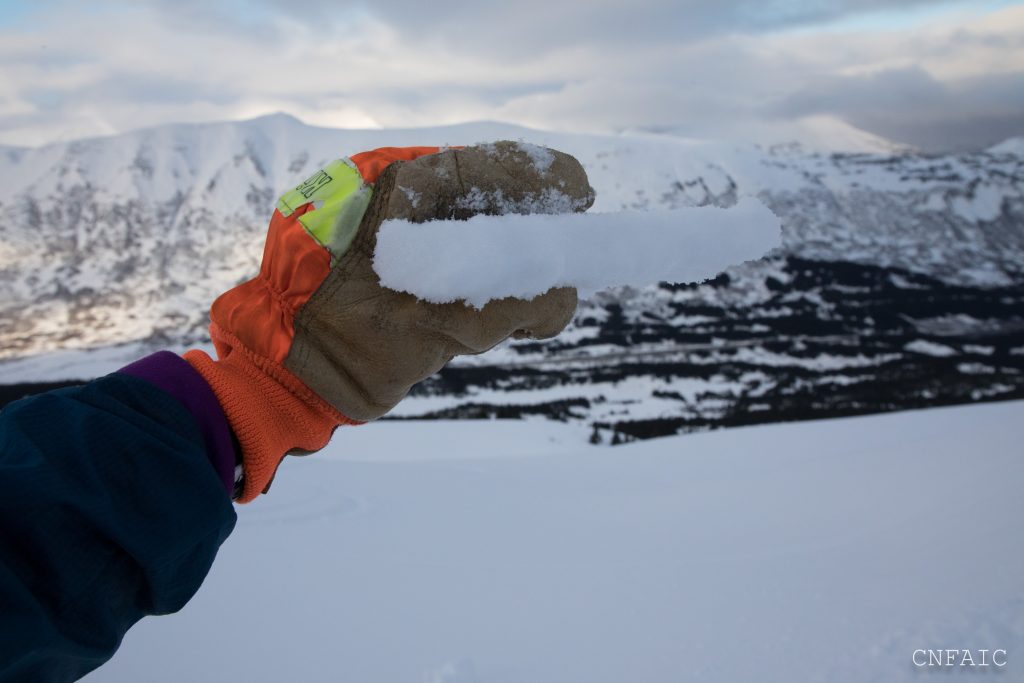 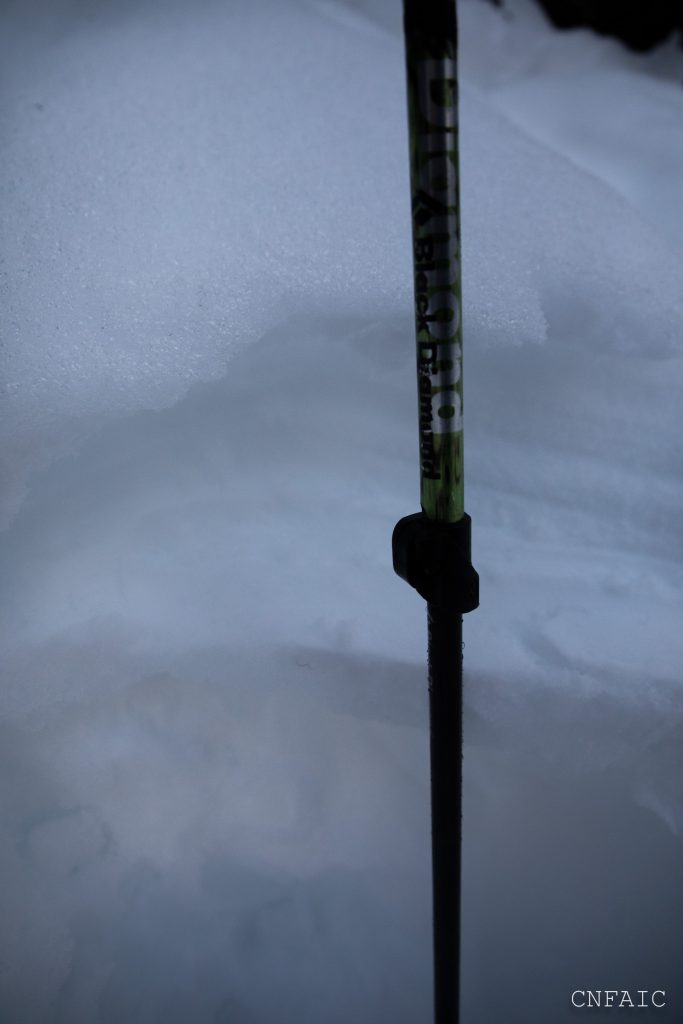 At 1500' a very thin drizzle crust was found with drier snow below. Also noted was a light breakable crust 6" below surface from Mon/Tues storm 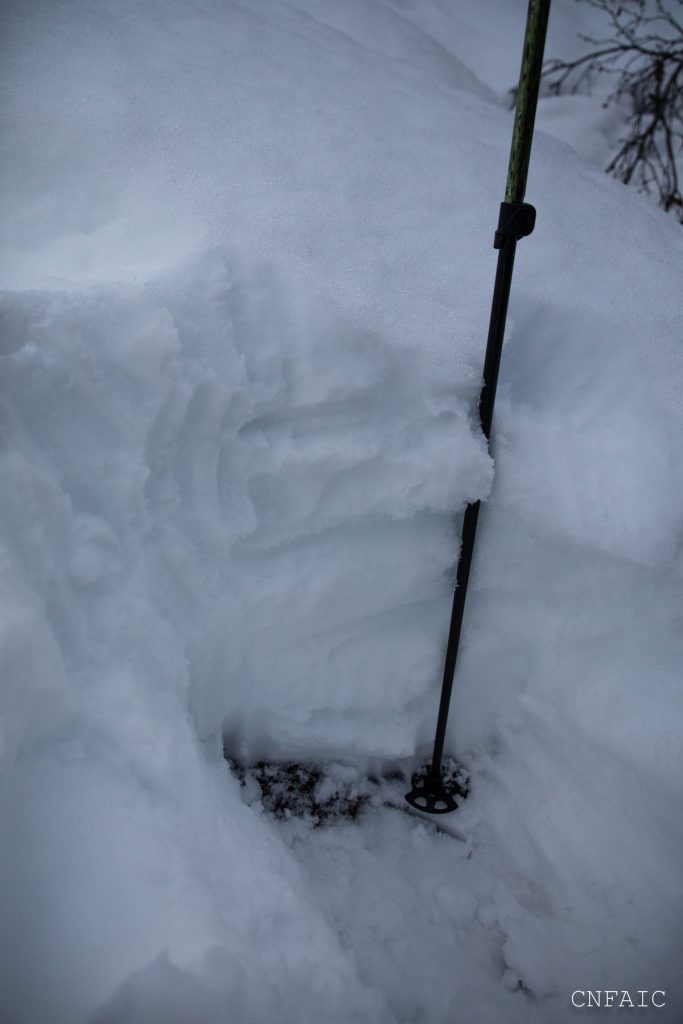 At 1200' the snow was more like mashed potatoes, more saturated. A light crust had formed by 3pm due clearing skies, but warm temps were keeping wet. 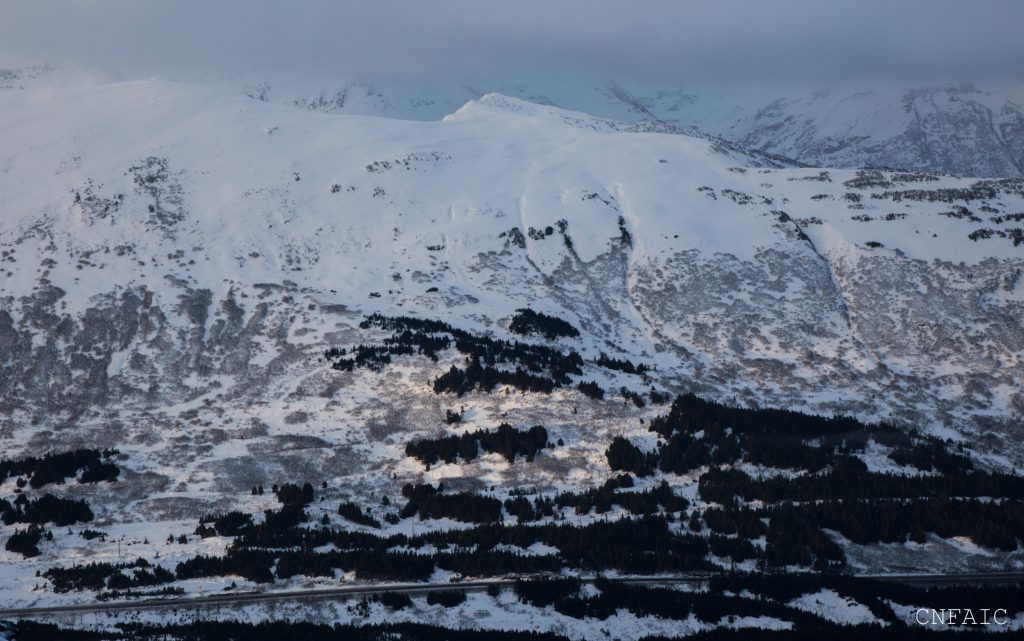 Looking across at Repeat Offender. 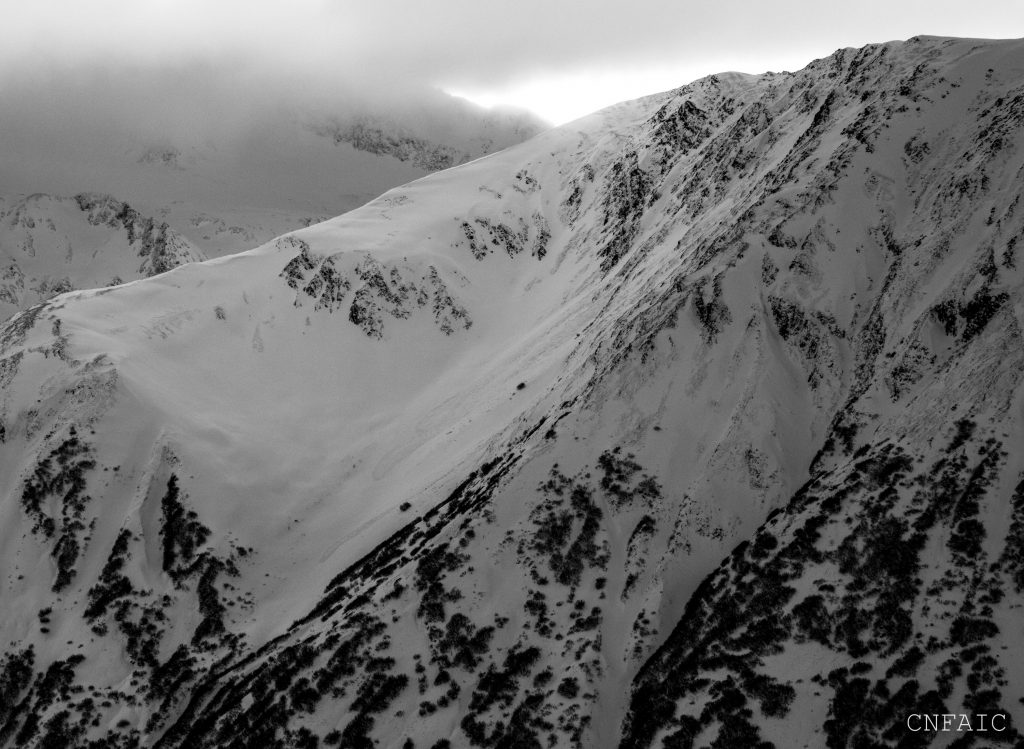 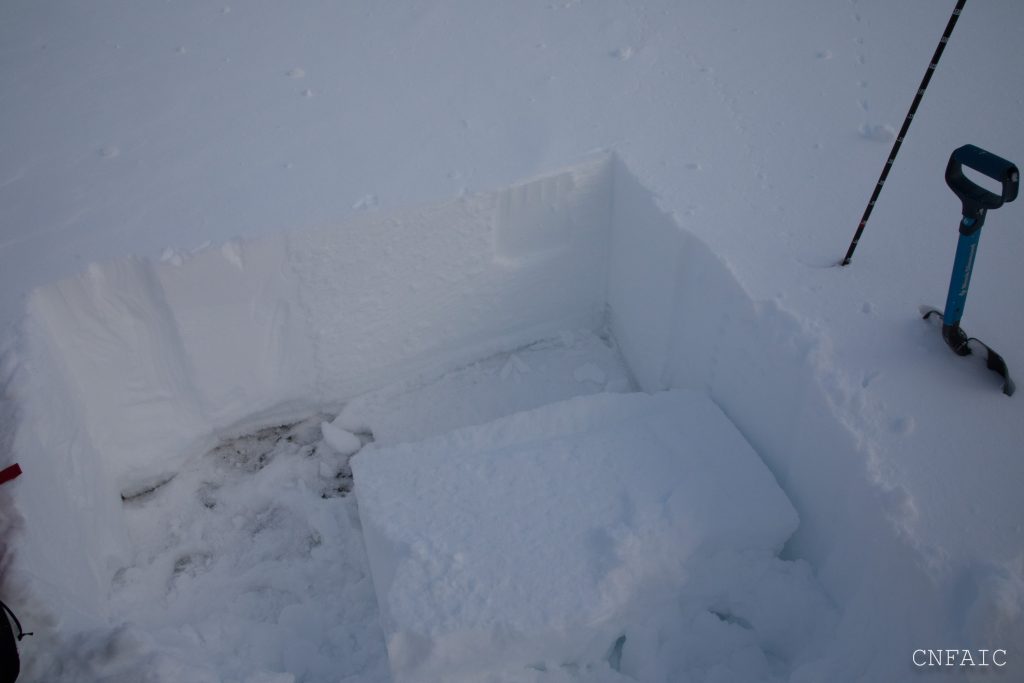 ECTP13: failed on large facets in between two crusts, a very thin deteriorating crust on the ground and a thicker October crust 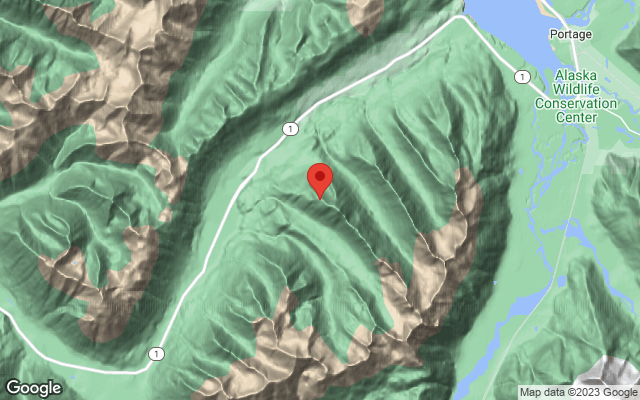