The avalanche danger is MODERATE on slopes steeper than 35 degrees and at all elevations. Human triggered slab avalanches 1-2+’ thick are possible in areas that saw a foot or more of new snow from over the weekend. Triggering fast moving loose snow €˜sluffs’ will also be possible in steeper terrain. There are a few glide cracks out there, limit time underneath them and give cornices a wide berth.

A storm that impacted our region last Sunday/Monday dropped varying amounts of snow throughout our forecast zone. Placer Valley was the winner with 2-3’, Turnagain Pass had 8-14”, Girdwood Valley saw 7-10”, and Summit Lake with 4-6”. This new snow fell on weak old surfaces consisting of near surface facets and buried surface hoar. Over the last few days the new snow has been settling and adjusting as cold weather and light winds have kept this snow mostly loose and unconsolidated. Over the last few days there have been a handful of natural and skier triggered slides and few snowmachine triggered slabs. In Placer/Skookum Valley where the slab is thicker these avalanches have been on steep features proportionate to their terrain size. In Turnagain Pass where steeper slopes have seen heavier traffic, these slabs have been relatively small, and not quite large enough to bury a person. Determining whether the new snow will act as a slab is the current question and will determine what type of avalanche could be triggered. Furthermore, the deeper the new snow the larger the avalanche will be if a slab is triggered – such as in the Placer Valley. Questions to keep in mind today:

This is a possible natural or remote triggered slab on a Southwest aspect near the toe of the Skookum Glacier. Notice the three sledders on lookers left side of the photo for scale. This is a good example of a terrain trap that could catch you by suprise and also shows you the potential of a slab to propagate on a bigger slope. Photo taken on 3/21/17 by Lloyd Tesch. 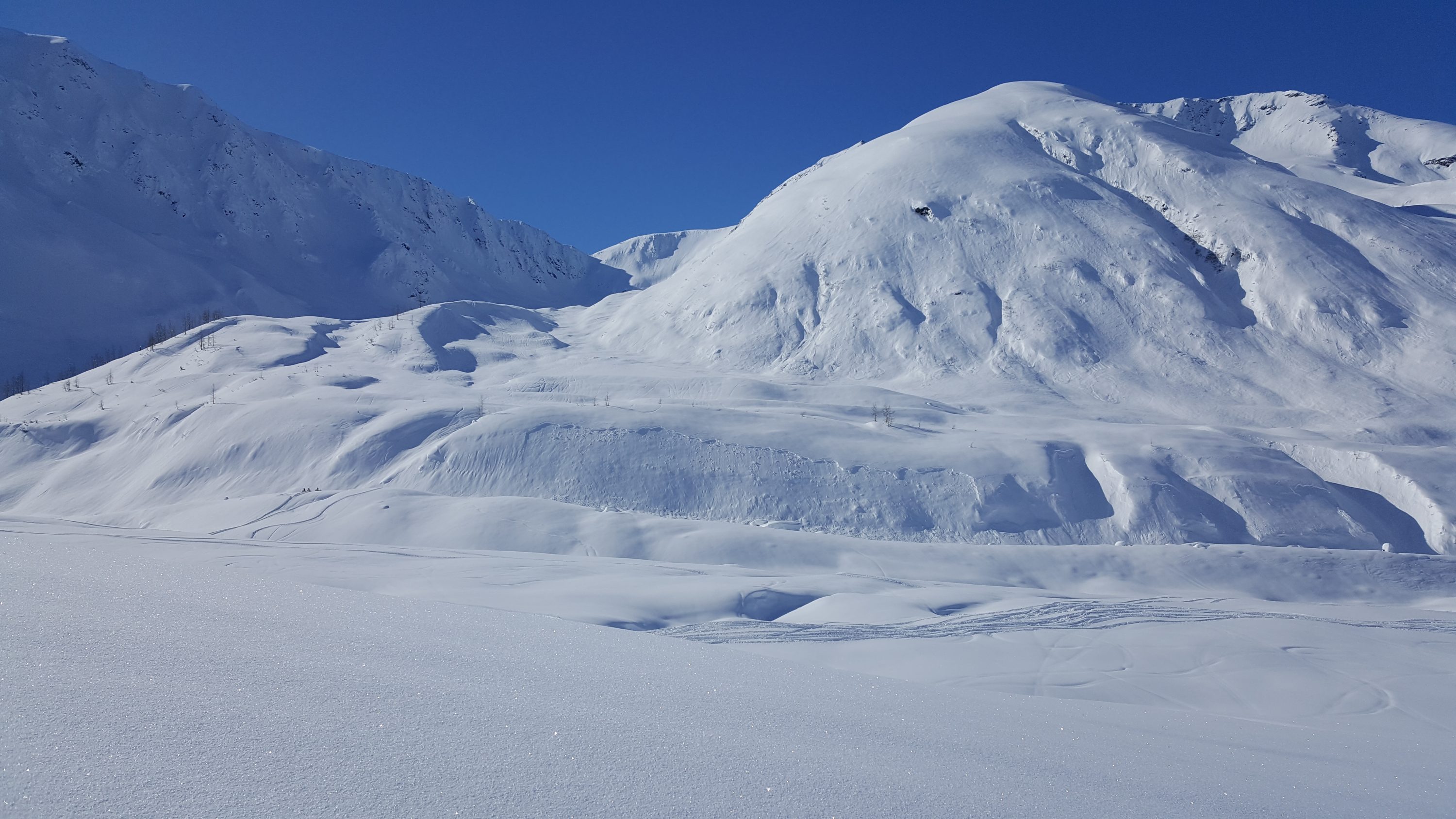 A handful of natural and skier triggered avalanches on Magnum’s South face. Photo taken on 3/21/17 by Peter Wadsworth. 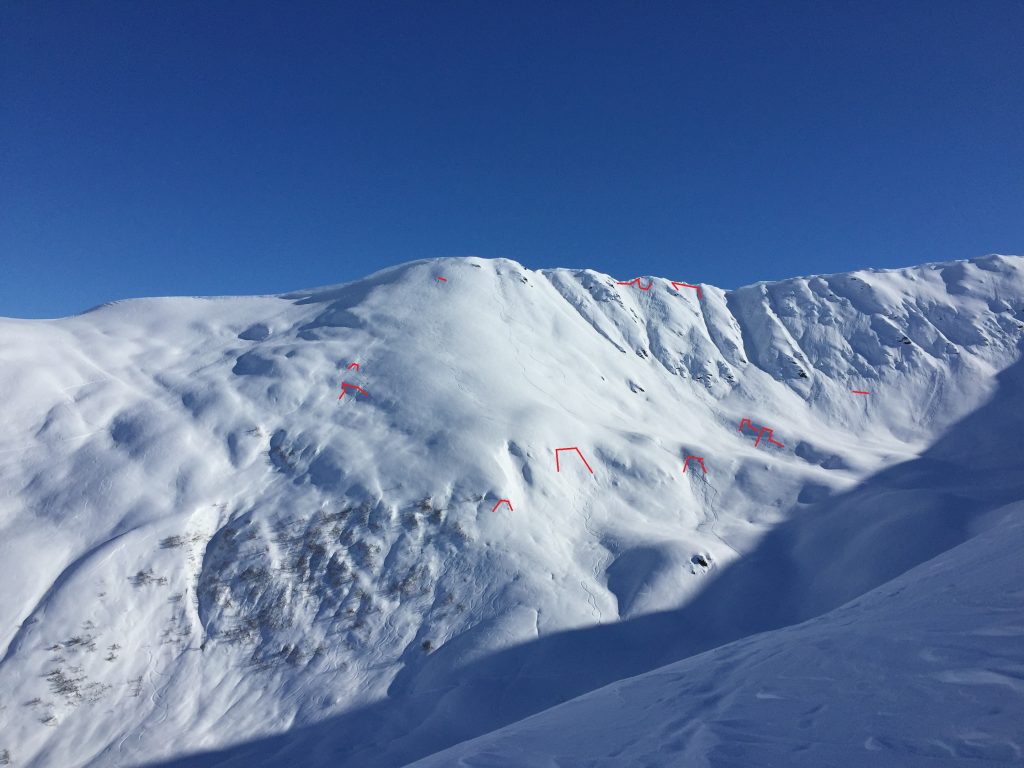 Triggering loose fast moving ‘sluffs’ will be possible today in steep terrain and could knock you over and be larger than expected. On southerly aspects where a thin sun crust has formed triggering a sluff will be limited.

Skier triggered sluff on the West face of Magnum from 3/21/17. 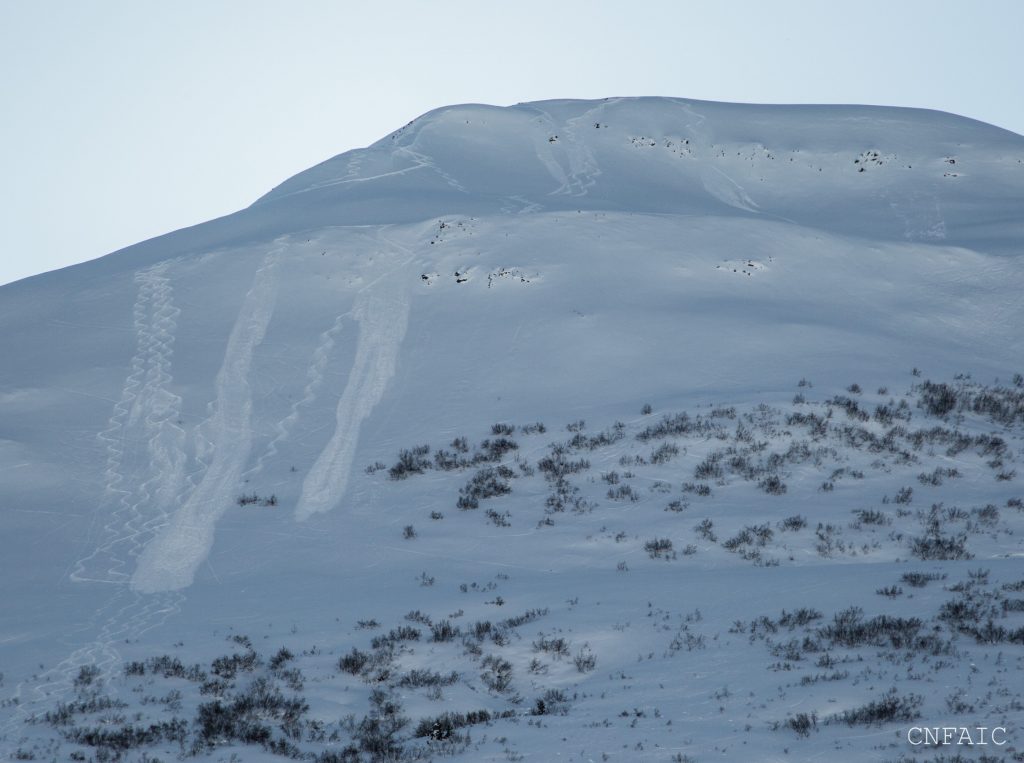 As always, give cornices a wide berth and minimize exposure under them.

GLIDE AVALANCHES?  Limit time under glide cracks. There is one on Seattle Ridge, left of the up-track, and some in the Skookum Valley along with others scattered about.

Yesterday skies were sunny and clear. Temperatures ranged from single digits F into the upper 20F’s below 2000′. In the alpine temperatures remained in the teens F with less fluctuation. Ridge top winds 5-10mph were from the West.

Today looks very similar.   Daily temperatures may range from 0F into the mid 20F’s during the heat of the day. Valley fog is expected to burn off in the afternoon. Ridge top winds are expected to be in the 5-15mph range and no precipitation is expected.

This stable and dry pattern is expected through Saturday. The first hint of precip in the forecast will be on Sunday as a Low in the Bering moves towards the Aleutians.