The avalanche danger is MODERATE on slopes 35 degrees and steeper at all elevations. Human triggered slab avalanches 1-2+’ thick are possible in areas that saw a foot or more of new snow from over the weekend. In the steeper terrain, expect to trigger loose snow sluffs that could run far. There are a few glide cracks out there, limit time underneath them and give cornices a wide berth.

Cold weather and light winds have helped Sunday’s new snow stay mostly loose and unconsolidated while it slowly settles and adjusts. If you are just tuning in now, the ‘sleeper storm’ over the weekend dropped highly varying amounts of snow to the area; quick recap: Placer Valley 2-3+’, Turnagain Pass 10-14″, Girdwood Valley 7-10″ and Summit Lake 4-6″. The new snow fell on a weak old surface consisting of near surface facets and surface hoar. This is keeping it from bonding quickly, but the good news is, the slab (new snow) is so weak and loose in places only sluffing is occurring (no slab). Determining whether the new snow will act as a slab is the current question and will determine what type of avalanche could be triggered. Furthermore, the deeper the new snow the larger the avalanche will be if a slab is triggered – such as in the Placer Valley.

Questions to ask:  What is the character of the new snow? Is it loose and unconsolidated or is it becoming ‘slabby’ with daytime warming on Southerly facing slopes? A slope around noon could be stable only to heat up at 3pm and become unstable, taking out your prior tracks. Was it affected by the winds during the storm and stiffer, aka a wind slab? Any slope where the new snow is acting like a slab will be suspect for triggering an avalanche. How well the slab is bonding with the old surface should be suspect as well – expect poor bonding until proven otherwise.

As for avalanche activity yesterday, there were a handful of snowmachine and skier triggered slides. We had a report of several soft slabs releasing near the toe to of the Skookum glacier in the Placer Valley. In the heart of Turnagain Pass on Cornbiscuit ridge, a skier triggered a shallow soft slab on a Southerly facing slope that was warming during the day. There were also a few small pockets skier triggered on Magnum.

Photo: Snowmachine triggered soft slab avalanche in small terrain around 18″ thick. It was taken near the toe of the Skookum glacier. Photo: Rusty Allen 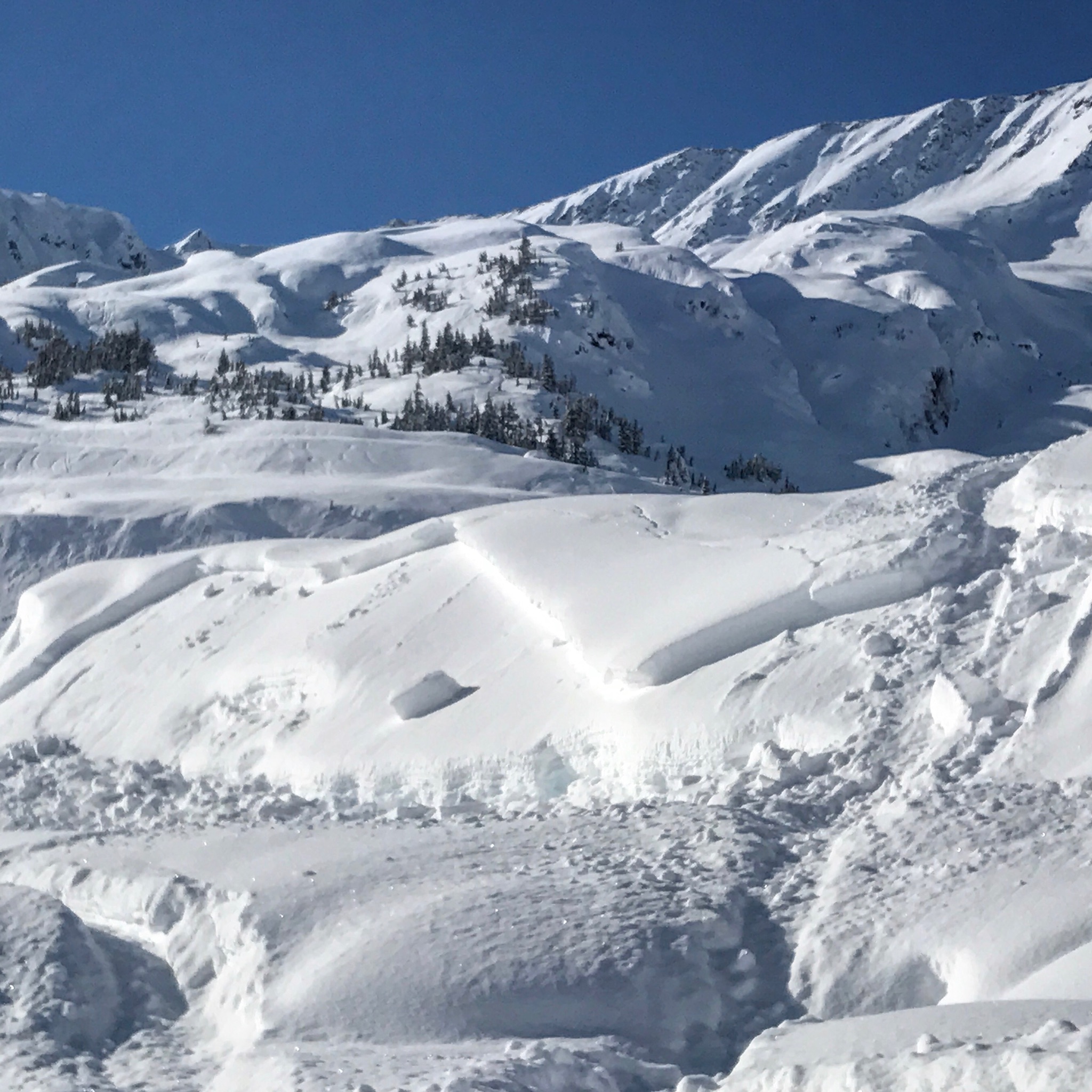 Photo: Shallow 12″ soft slab triggered by a skier on a South facing slope during the heat of the day. Photo: Adam Baxter 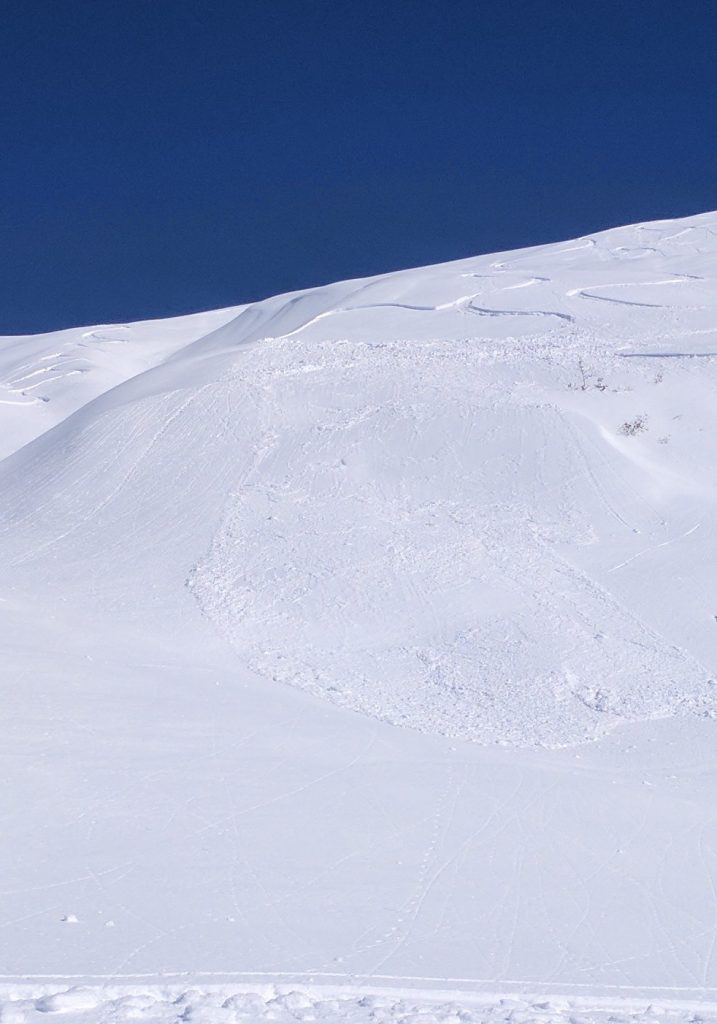 Photo: The annotation says it all. Winds during the storm have likely created a stiffer ‘wind’ slab resting on weak faceted snow on this higher elevation slope. Photo: Peter Wadsworth 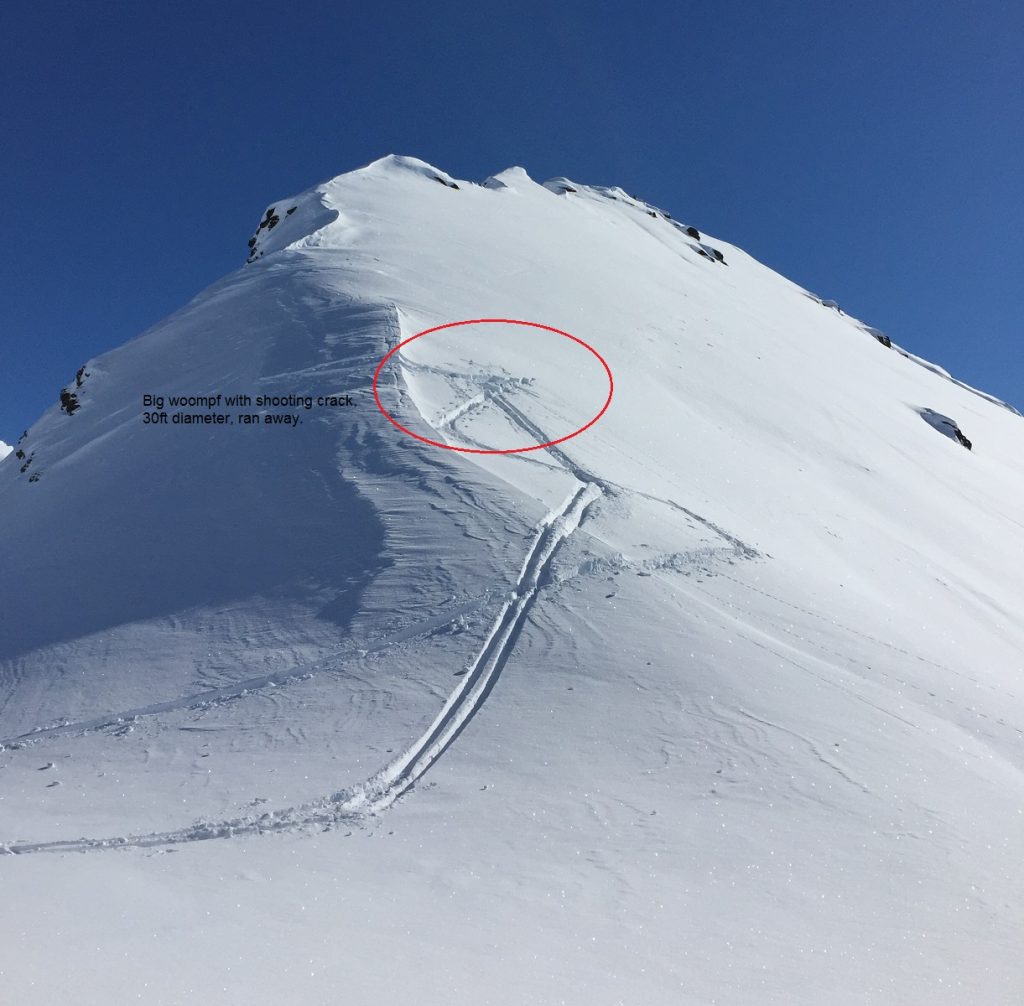 Watch your sluffs. The new snow sat under cold skies last night and this will only encourage it to become looser today – meaning sluffs could be larger and run further than expected. However, southerly aspects may sport a thin sun crust, if this is the case, sluffs will be limited. 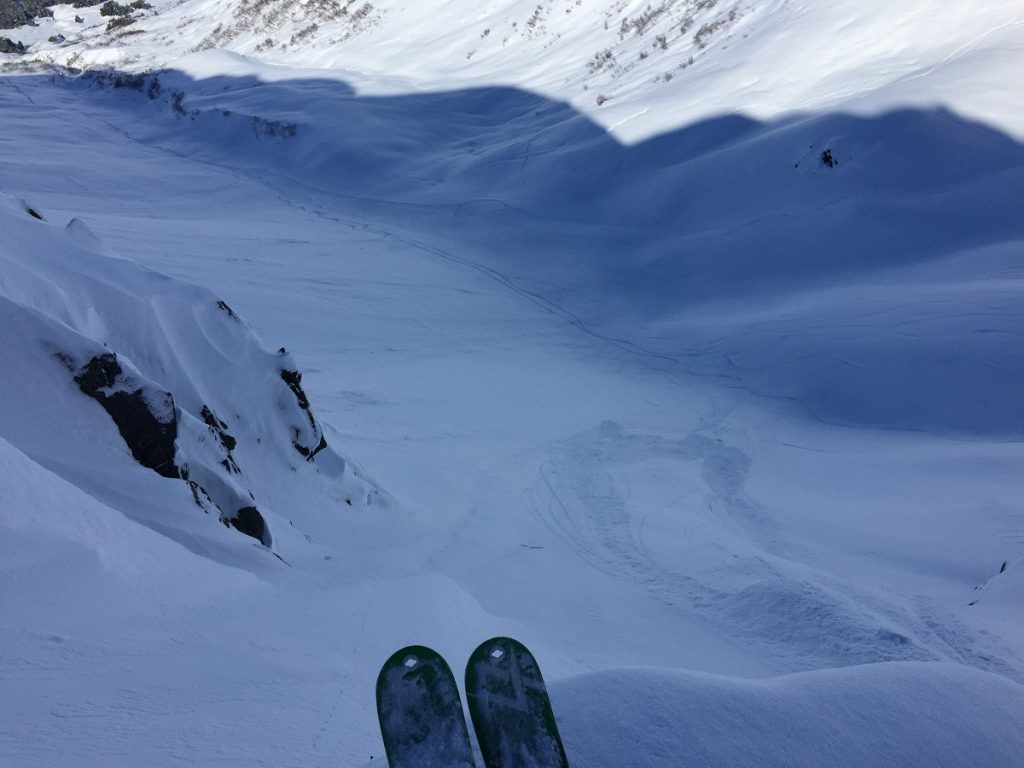 As always, give cornices a wide berth and minimize exposure under them.

GLIDE AVALANCHES?  Limit time under glide cracks. There is one still opening on Seattle Ridge, left of the up-track, and some in the Skookum Valley along with others scattered about.

Sunny skies, light Northerly winds and cool temperatures covered the region yesterday. Ridgetop winds during the past 24-hours have been 5-10mph with gusts into the teens. Temperatures warmed up to the upper 20’s to 30F with direct sunshine but have cooled dramatically overnight to the single digits in valley bottoms.

Today, another beautiful sunny day is on tap. Temperatures should be cooler however, warming up from the single digits to the low 20’sF in most locations. Ridgetop winds are expected to be light again from the North and West, 5-10mph, with some areas seeing stronger gusts into the 20’s mph.

The remainder of the week should be similar. We will be watching the winds, yet at this time they look to remain light to moderate.