The avalanche danger is  MODERATE  for a variety of avalanche problems. First, fresh wind slabs formed by moderate to strong winds today will be possible to trigger on leeward slopes. These could be quite touchy and around 1 foot thick. They could create a large amount of debris if triggerd on larger sustained slopes. Triggering sluffs on the steeper slopes should be expected and these are likely to run far may entrain a large amount of debis. Lastly,  keep in mind that  due to poor snowpack structure, there is still a chance of  triggering a large slab avalanche (2′-5′ thick) that breaks near the ground.

As you make plans this weekend remember that many areas around Southcentral, Alaska including the  Southern Kenai Mountains, Seward, Snug Harbor and Lost Lake,  Anchorage Front Range,  Hatcher Pass  have had  an unstable snowpack over the past few weeks.  Human triggered large avalanches, breaking near the ground, are  still  possible.  Please see links above for recent activity.  Careful snowpack evaluation and cautious route-finding are recommended.

Have you purchased your tickets yet for the 3rd Annual SNOWBALL!! If not, get them HERE!!  Come out, have some fun, win some prizes, and support avalanche awareness and education!  All proceeds to benefit  Alaska Avalanche School  and  Friends of the Chugach National Forest Avalanche Information Center.

TODAY:    Alyeska Resort will be manning an avalanche beacon park from 12-4pm on the mountain. If you are skiing here on Sunday, stop by the area called ‘Alpine’, located downhill from ‘Eagle Rock’, for  practice using your beacon and probe!!

It was an active day for human triggered avalanches yesterday. All but one of these slides were loose snow avalanches or sluffs. The one that was not was a fresh, but hard, wind slab avalanche triggered in the Girdwood Valley zone on the headwall of the Raven Glacier. This wind slab was shallow, 6″ to a foot thick, and hard – allowing the person onto the slope before it released. See the write up in the link.

As far as sluffs go, they were long running and fast. As one observer remarked “sluffs got uncomfortable large”.  This is due to 6-8″ of new light snow that fell on a few inches of loose faceted snow and surface hoar (acting as ball bearings). The reason they are running so far is a hard base and/or crust underneath is acting as a slick bed surface. For today, sluffs should be just as concerning and far running – keep a close eye on your sluff.

Long running and fanning sluffs on the back Southerly slopes of Sunburst (Jonathan Rupp). 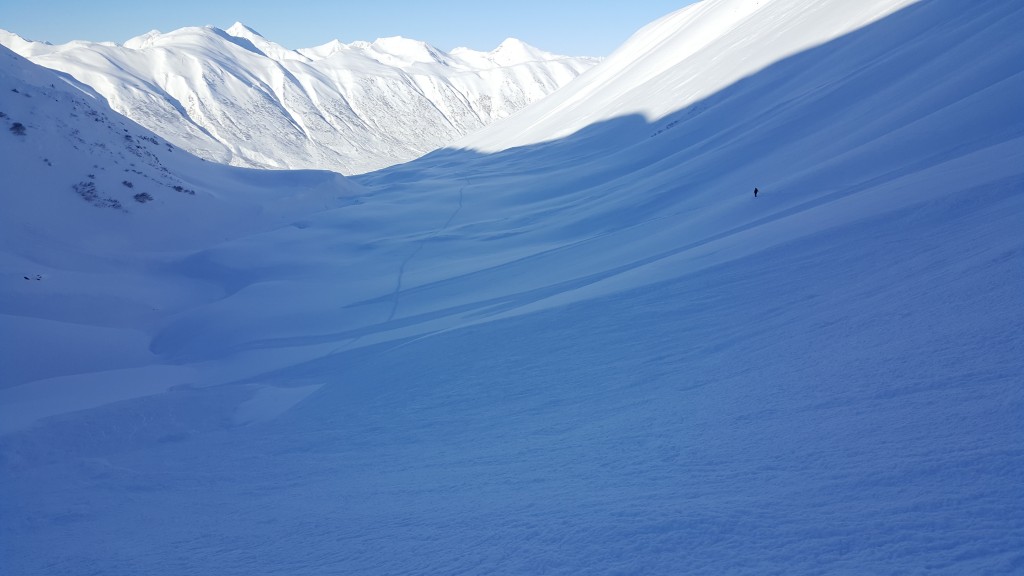 Although sluffs are a concern, wind slab avalanches created by moderate/strong winds today are a much less manageable situation. With 8-10″ of loose snow on the surface, it will not take much wind to form slabs. Furthermore, slabs will be sitting on a slippery base, making them very touchy. If the winds really crank, we could see natural slabs as well. Due to the limited amount of snow available for transport, slabs should be around a foot thick. They are likely to initiate sluffing as they avalanche and large amounts of debris can be generated by even a small wind slab.

Watch surface conditions and wind patterns closely for areas that could becoming windloaded. Look for areas of stiffer snow over softer and quick hand pits are good ways to assess the bonding of any wind slab found. 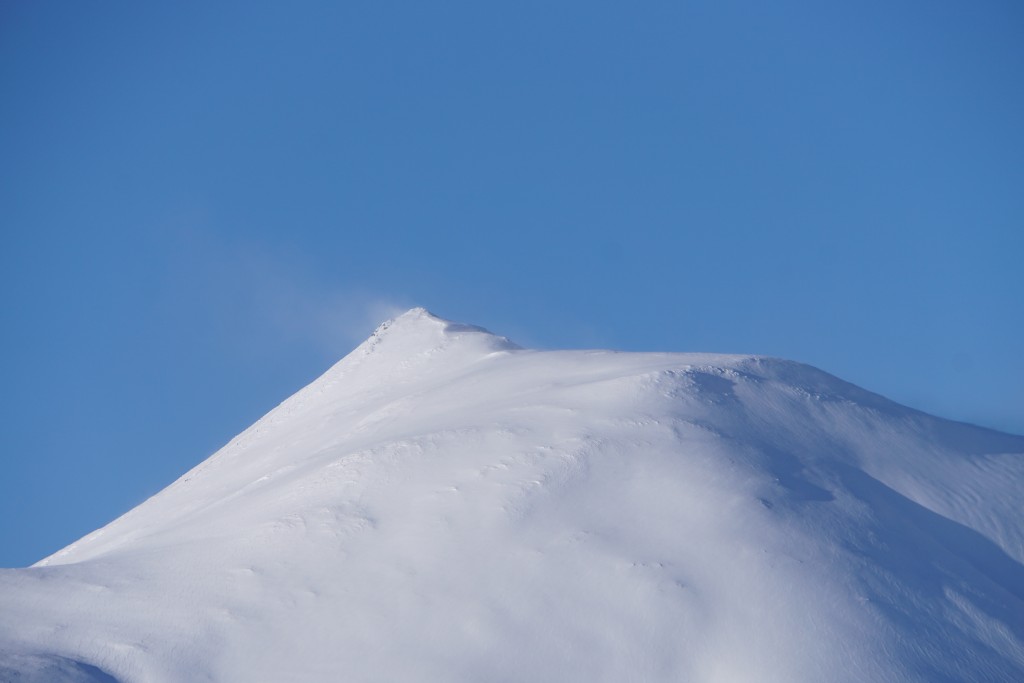 Even in the trees and at lower elevations, shallow slabs and sluffs are possible. This is a shallow soft slab skier triggered avalanche on a steep but small slope in the Tincan Trees (Zachary Liller). 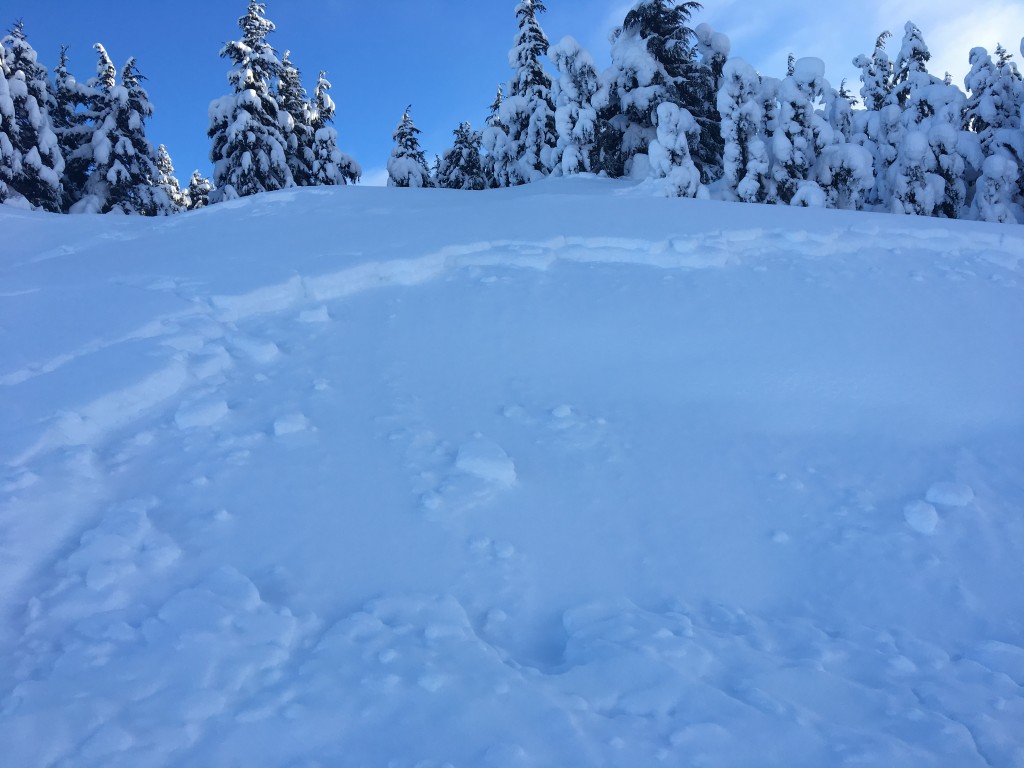 Weak snow (facets and depth hoar) in the lower layers of the snowpack lingers as an issue in our advisory area. It has been 9 days since the last human triggered avalanches on these layers. However, triggering a deep slab is still a possibility if you find the wrong spot and a concern due to the depth of slab overlying the weak snow. The likelihood for someone to find and trigger a large slab is decreasing as the snowpack adjusts, but the poor snowpack structure remains and the consequences are scary. Both near miss avalanche accidents last week were triggered in thinner areas of the snowpack, on slopes that already had tracks on them. The tricky part about this particular avalanche problem is that it is very difficult to assess. Obvious signs like whumpfing and shooting cracks are unlikely and stability tests may not be reactive. Just because a slope has tracks on it does not mean it is safe. Likely places to trigger a deep persistent slab will be near rocks or in thin zones where affecting the weak layer is more of a possibility. Likely triggers are large: snowmachines, groups of people or cornice falls. Identify and avoid terrain traps (like large gullies).

It was a cold and sunny day in the region yesterday along with some valley fog that filtered in. Ridgetop winds bumped up to 15mph with gusts in the 20’s from the North and West. Temperatures sat in the single digits at all locations, valley bottoms to ridgetops. Overnight, some low-lying area are in the minus double digits!

For today, clear skies this morning will give way to cloudy skies in the afternoon as a large low-pressure system moves into the Gulf. Light snowfall should begin as well this afternoon possibly adding another 1-2″ by 6pm. Ridgetop winds are expected to increase to the 15-25mph range from the East. Temperatures will warm with this system and flow direction – up to 20F at the parking lots and mid-teens on the ridgelines.

Beginning Monday and through the middle part of next week, a potent warm storm system will impact the area, bringing rain to sea level. Check back tomorrow to see how this storm is shaping up!