A generally LOW avalanche danger exists in the mountains surrounding Turnagain Pass.  Point release avalanches triggered by the sun and/or humans on steep slopes with a Southerly tilt will be possible again today. Cornice falls are also possible, and occurred yesterday, with the warm sunny weather. Watch for winds that may pick up today to form soft and shallow wind slabs on leeward slopes. Lastly, triggering a large avalanche breaking 2-4′ deep in weak snow deeper in the pack is unlikely but not out of the question.

Girdwood Valley:   A MODERATE avalanche danger exists in this area due to a thinner snowpack with weak snow found near the base. The possibility exists for large avalanches, breaking near the ground, to be triggered in thin areas and/or remotely from ridgelines or the bottom of slopes.

Placer Valley, Johnson Pass and areas  South of Turnagain Pass:   There is a  MODERATE  avalanche danger in these areas as well for large slabs breaking near the ground. We have little information in these zones, but we do know there is weak snow near the base of the pack, similar to the Southern Kenai and Girdwood Valley.

Summit Lake:  An unstable snowpack exists in the Summit Lake area and similar to the regions above, human triggered avalanches breaking near the ground are possible. Make sure and check the Saturday Summit Summary  HERE.

** It will be critical to carry rescue gear and maintain  safe travel protocol this weekend – such as exposing one person at a time, grouping up in safe zones, having escape routes planned and watching your partners!

Avalanche Problem 1
Dry Loose
Dry Loose avalanches are the release of dry unconsolidated snow and typically occur within layers of soft snow near the surface of the snowpack. These avalanches start at a point and entrain snow as they move downhill, forming a fan-shaped avalanche. Other names for loose-dry avalanches include point-release avalanches or sluffs.
More info at Avalanche.org 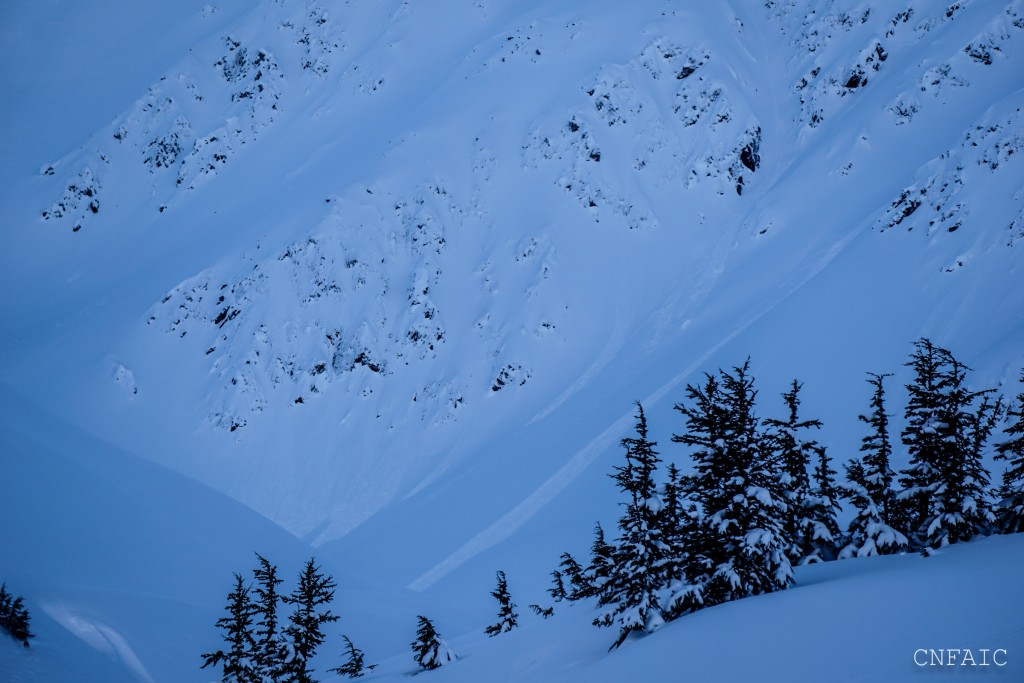 Wind Slabs? There is a slight chance winds could bump up enough to form soft shallow slabs on leeward slopes. Although the main flow will be Northwesterly, loading Southeasterly aspects, this pattern also creates a Southerly flow along the East side of Turnagain Pass which loads North aspects (such as Sunburst and Tincan).

With February already here along with a high pressure stint bringing sunshine, it may be easy to forget many areas in Southcentral have a poor snowpack structure. As mentioned in the bottom line above, weak snow near the base of the pack exists on slopes with a thinner snow cover. The heart of Turnagain Pass has drawn the lucky ticket and the pack is deeper and stronger with avalanche concerns focused on surface instabilities (sluffs and shallow fresh wind slabs).

If deciding to venture to the periphery zones, watch for recent avalanche activity, listen for whumphing (collapsing of the snowpack) and cracks that shoot out from your snowmaching, skis or snowboard. There also can be no warning signs before an avalanche is triggered. This type of avalanche is often triggered in a thin spot, near rocks or on the edge of the slab. These can also be triggered by large groups and/or snowmachines on, near or under slopes. Again it will be critical to maintain safe travel protocol, again as mentioned above. 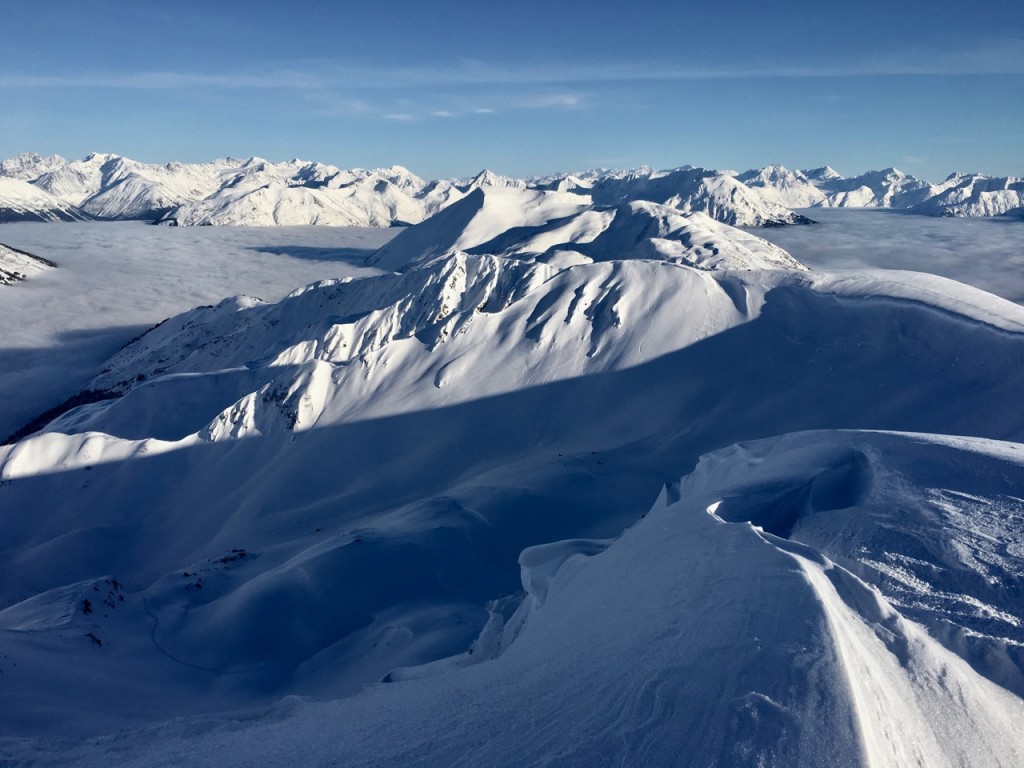 Cornice falls are possible with warm temperatures and sunshine. These could release naturally and be near the tipping point that person breaks them off easily. Keep a wide berth when on ridgelines and limit time underneath.

Photo: Cornice fall yesterday in Warmup Bowl in the Seattle Creek drainage. Triggered from a person on the ridge later in the day. 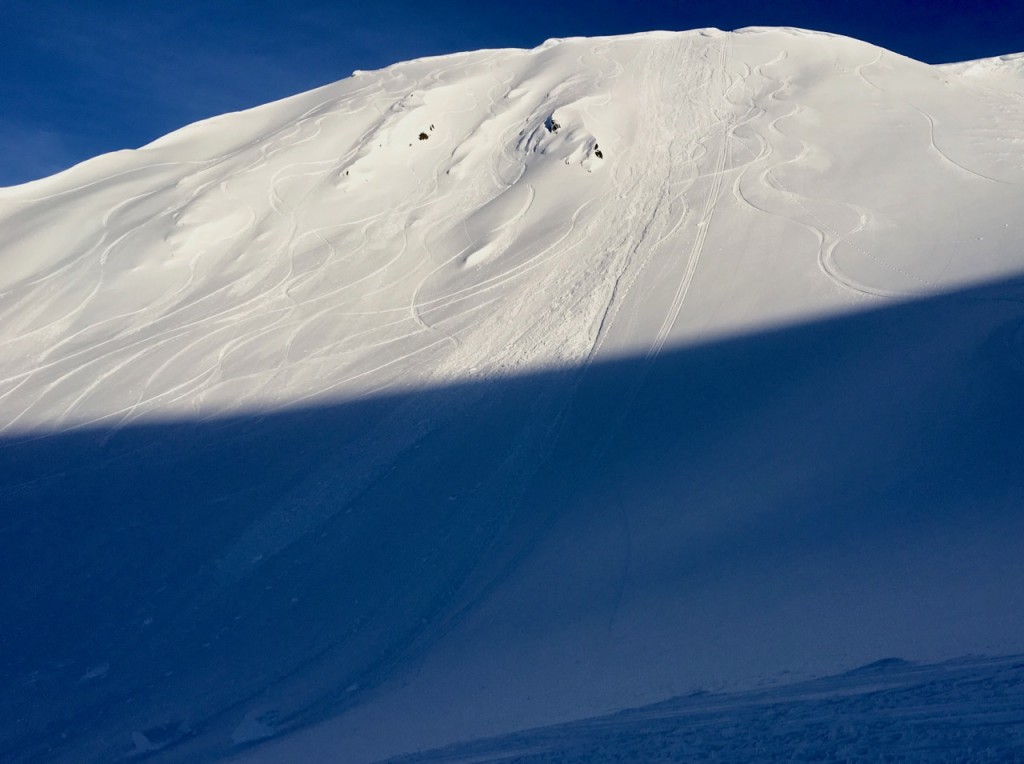 It was a brilliant sunny day in the mountains yesterday with little to no wind at all elevations! Temperatures were cool (~10-15F) in valley bottoms and warmer (20-30F) on the ridgelines.

Today will be much of the same with two slight changes, but first, bring your dark lenses as the sun will be intense. 1) Ridgetop winds have just bumped up slightly this morning and could be breezy for the day (5-15mph from the North and West, gusting 10-20mph). Temperatures have climbed overnight at the high elevations and sit around 32F – valley bottoms have decreased and sit in the single digits… Another blocking high-pressure and associated stout inversion is settling in…

These conditions are expected to persist all the way through the weekend and into Monday. There’s no hint of a storm cycle in the foreseeable future, but we could get some flurries the middle part of next week.