The avalanche danger is  MODERATE  in the Turnagain Pass area. Above 1000′ on slopes over 35 degrees triggering a wind slab 6″ to 2′ thick is possible on wind loaded slopes. Heat from the sun will also be something to monitor and could make wind slabs, cornices and loose snow avalanches more tender in the afternoon.  The probability of triggering a larger persistent slab 2-3′ is decreasing in Turnagain Pass, but the consequences remain high should you find the right trigger spot.  Be sure to  carry your rescue gear and practice safe travel protocol – such as exposing one person at a time, grouping up in safe zones, having escape routes planned and watching your partners!

Below 1000′ the danger is  LOW, but don’t be  suprised by a  loose snow avalanche on very steep terrain. This is not likely to bury a person, but could knock you over.

Heightened avalanche conditions persist in the Girdwood Valley and Summit Lake zone where triggering a deeper slab avalanche is more likely. Check out the Saturday Summit Summary  HERE  and if you travel in any of these areas please send us an observation HERE.

Yesterday was the first day of the year where the heat from the sun was noticeable. Several small point releases were observed on South facing slopes during the heat of the day, and one observer reported seeing “little tree turds happening in the afternoon” on Tincan. Today’s warm temperatures and sun could weaken old wind slabs making it easier for a human to trigger. Wind slabs will be possible on steep wind loaded (both top and cross loaded) and may become easier to trigger in the afternoon on solar facing aspects. These may be 6″ to 2′ thick. It will be important to look for pillowed or drifted areas and watch for shooting cracks. Also if the surface of the snow is moist or you notice point releases on Southern exposures, this an obvious clue that a wind slab could be extra tender. These slabs may be soft or hard and may allow a person to get out onto them before they break.

Loose snow avalanches: About 6-10” of low density snow exists on all aspects. This loose surface snow could be fast moving and easy to trigger in steep terrain.  Manage this problem by letting your “sluff” move past you, and be extra careful in terrain where taking a fall could have high consequences.  Natural loose snow avalanches are also possible on solar aspects in the afternoon.

Sun triggered roller balls on a SE aspect of Seattle Ridge were seen yesterday from the road in several locations. Also note the driffted snow and cross loading along the sub-ridge. 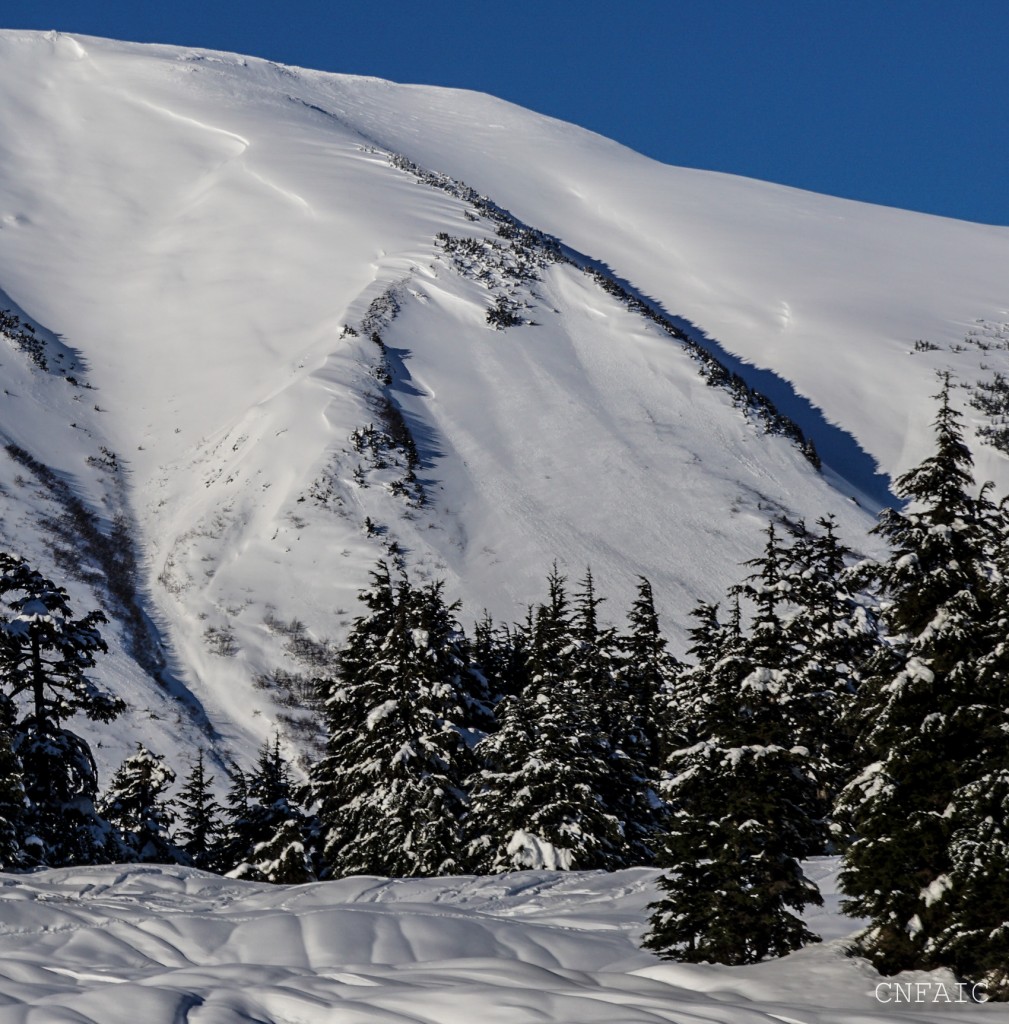 The January 26th warm storm event added 2-3′ of snow to the upper elevations over our entire forecast zone. This event overloaded a variety of weak layers in the pre-existing snowpack and caused a widespread avalanche cycle in our region. The good news is the snowpack is showing signs of adjusting to the load, the bad news is that there is still potential to triggering a persistent slab avalanche if you find the wrong spot. This can make for difficult snowpack assessment as the weak layers of concern (depth hoar, facets and buried surface hoar) are lurking anywhere from 2-4+ feet below the surface.

Girdwood Valley and Summit Lake have more potential for triggering a persistent slab avalanche, but Turnagain Pass is not completely out of the picture yet. This particular set-up is more widespread on the Southern end of Turnagain Pass and even into Johnson and Lynx Creek where early season conditions created a weaker foundation. The tricky part about this avalanche problem is the weak layers in question are fairly deep, and it will likely take finding a thin spot in the slab or a big trigger to initiate an avalanche. Multiple people on a slope or high marking onto a thinner area of the snowpack could trigger a large destructive avalanche. In general – this is a high consequence but low probability situation. If choosing to ride or ski the steeper terrain, we recommend using safe travel protocol, by only exposing one person at a time and grouping up in safe zones.

Weak faceted snow was found in multiple locations and elevations in Lynx Creek drainage yesterday. All stability tests were showing that this avalanche problem is becoming very hard to trigger, but the potential still exists for propagation of a larger avalanche. 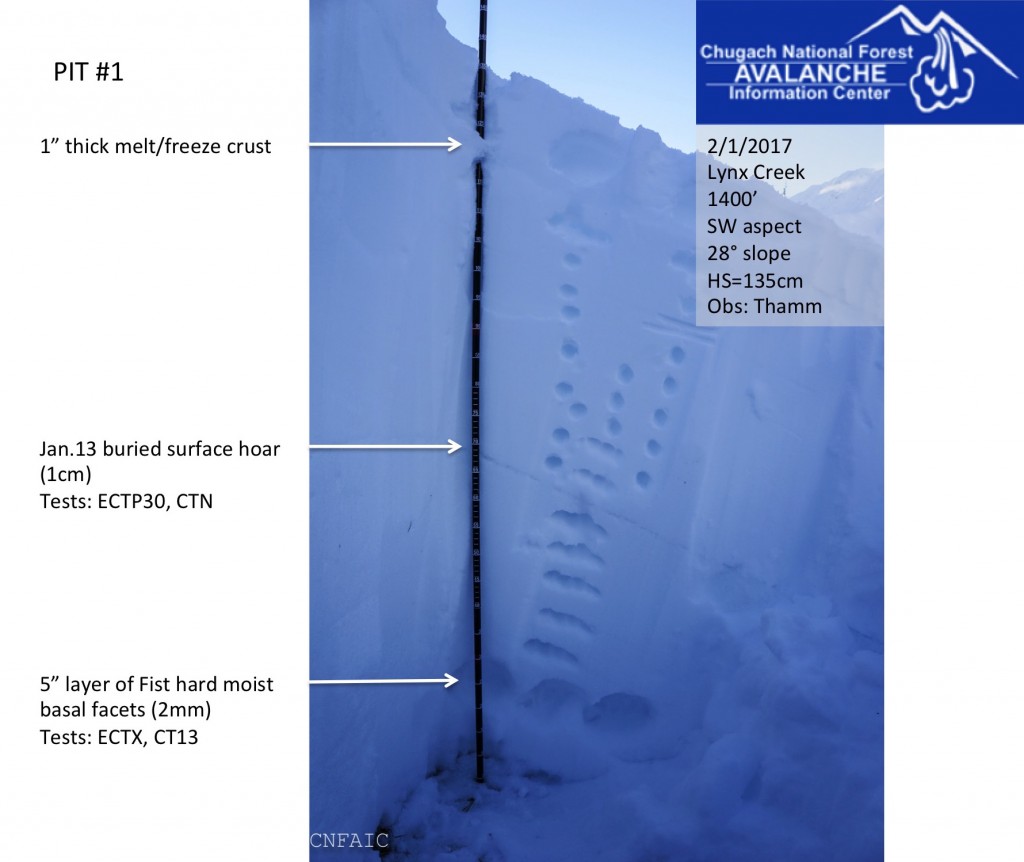 Give cornices a wide berth, avoid travel on slopes below them and remember they can break farther back onto the ridge than expected. Today’s warm temps and sun could also be adding stress to cornices. If cornices do break and fall they could trigger an avalanche on the slope below.

Possible cornice triggered wind slab on a SW aspect of Magnum. Exact timing of this event is unknown, but likely happened within the last two days. Photo taken 2/1/17. 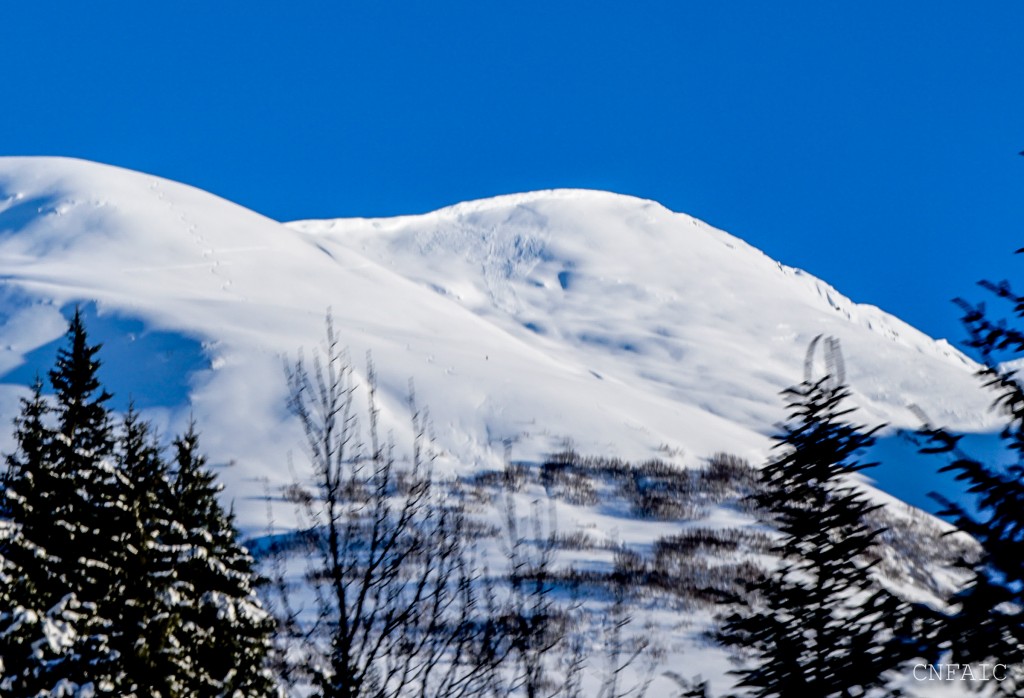 Yesterday skies became clear and sunny by late morning. Day time temperatures reached the low 30F’s in the alpine, but dipped down to the low 20F’s overnight.   Overnight valley temperatures dipped into the teens. Ridge top winds were light and from the East. No precipitation was recorded.

Today skies will remain clear and winds are expected to be light and variable. An inversion is the most notable weather pattern in our region and should cause valley temperatures to remain slightly cooler (15-25F) today. In the upper elevations above 3000′ temperatures could reach the low 30F’s by early afternoon. There is a chance for valley fog to form.

A similar pattern is expected over the weekend due to a high pressure over mainland Alaska. Expect clear skies and inverted temperatures to persist for the next few days.