The avalanche danger is CONSIDERABLE in the alpine and treeline elevations where triggering an avalanche 2-3′ thick is likely to have high consequences. An avalanche this size also has the potential to step down into a deeper layer of the snowpack in the upper elevations. Avoid being on or under steep slopes and pay attention for other groups traveling near you. Be aware of any changing conditions like increasing winds, which will make triggering this avalanche problem more likely today.

A LOW avalanche danger exists below 1000′ where the snowpack has a firm crust and triggering an avalanche is unlikely.

Turnagain Pass is now OPEN to motorized use . This opening happens to coincide with high consequence avalanche conditions!  Before you head into the mountain make sure your gear and rescue skills are up to speed and keep checking the forecast daily.  There is plenty of fun riding on mellow terrain, away from avalanche terrain and runout zones.

The Seward Ranger District has opened a couple of new areas to riding as of yesterday morning.  South Fork Snow River corridor and Summit Lake are now open to motorized use.  Lost Lake access via Primrose and Fireman’s still remain closed.

Great work everyone! No human triggered avalanches were observed yesterday. In general folks were keeping slope choices mellow on both sides of the road. The Seattle Ridge up-track was fully established and once riders ascended the ridge most people were sticking to low angle terrain. Big props to all those using radios for communication to minimize exposure both on the up-track and when stuck. This is a great tool for maintaining good communication with your partners and practicing safe travel habits in avalanche terrain.

With that said we will encourage more patience and avoidance of large steep slopes. Yesterday observers were getting consistent test results on a widespread layer of buried surface hoar 2.5’ deep in a variety of locations and elevations in Turnagain Pass. Also noticible yesterday was how much the slab has settled and gained strength. This means it will be harder to trigger the weak layer, (especially for a skier or snowboarder) but this also means there is more potential for an avalanche to release once well out onto a slope. The most likely trigger spots will be in thinner areas of the snowpack near ridges and in rocky areas. A snowmachine is also more likely to trigger this weak layer due to its sheer weight and ability to penetrate deeper into the snowpack.  This particular avalanche problem, a Persistent Slab, can take awhile to heal. A slab 2-3’ is likely to be large and connected and bigger terrain will have much higher consequences.

Just because someone has ridden/skied a steep slope does not deem it ‘safe.’  It is not out of the question for the 2nd, 3rd or 5th person to find just the right ‘trigger spot’ or even trigger a larger avalanche in a deeper layer layer of the snowpack. More on this in Secondary Concerns.

In addition, should winds pick up, it could increase the likelihood for triggering a persistent slab. Practice safe travel habits and be on the look out for blowing snow, shooting cracks or ‘wumpfing’ – these are obvious signs the snowpack is unstable.

Buried surface hoar is easy to indentify in pits right now. Here is what it looks like on the bottom of the slab. Photo by Mik Dalpes 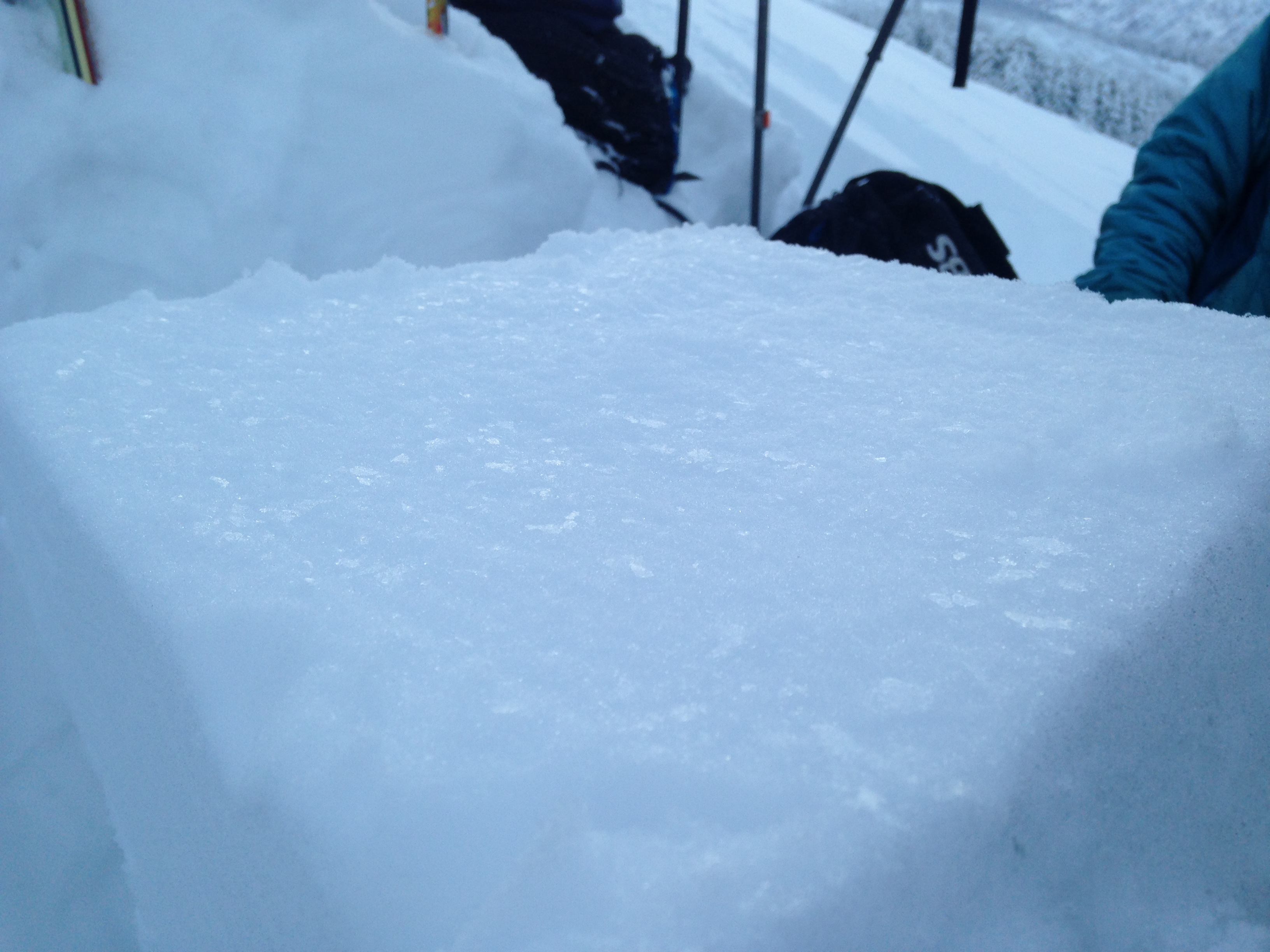 A view of the Seattle Ridge up-track as seen from Tincan yesterday. Avoid skiing/riding on the upper part of Repeat Offender above the up-track to help minimize exposure to anyone below. 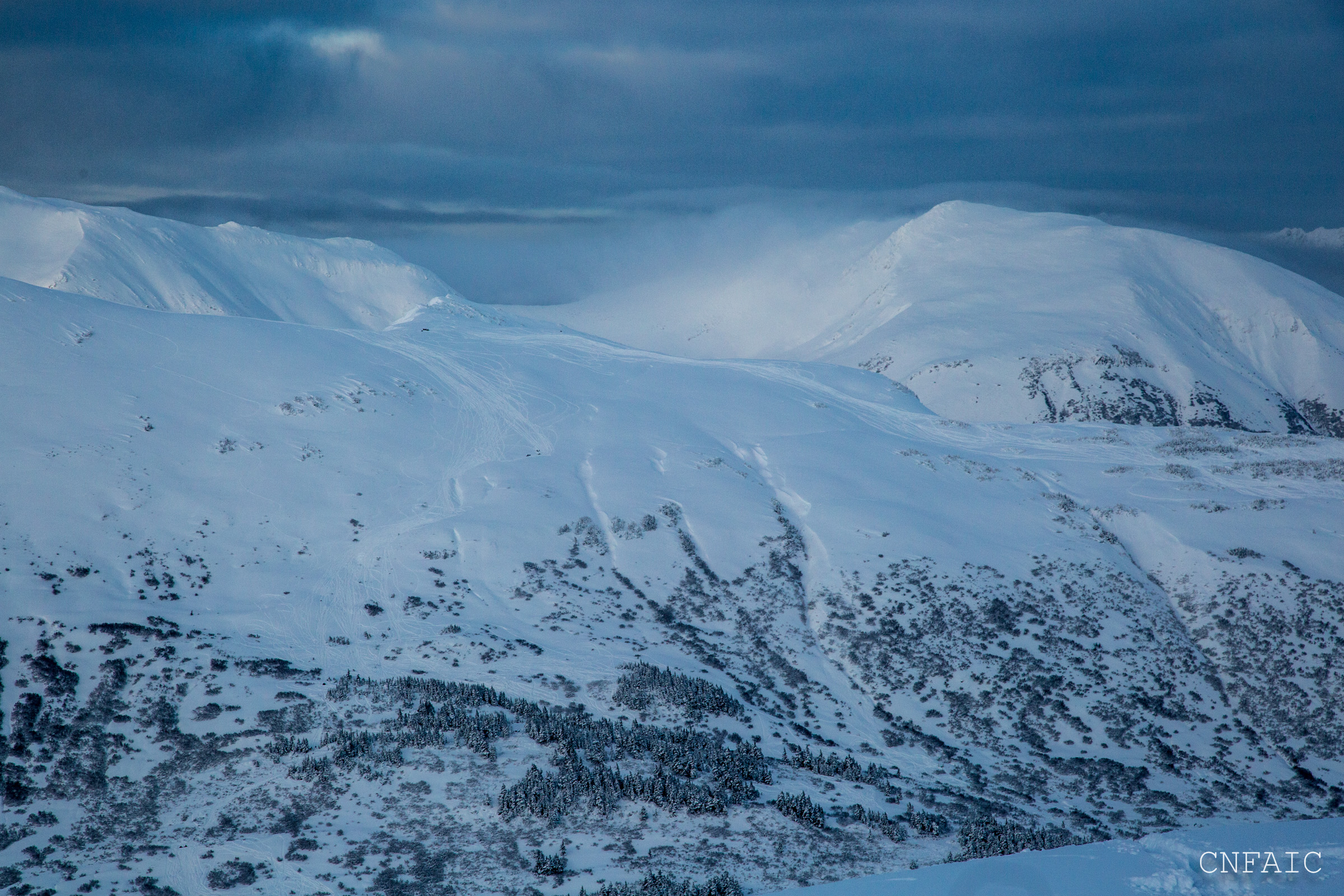 Our current snowpack structure is complex. Multiple weak layers exist within the entire snowpack including weak faceted snow near the ground and three separate layers of buried surface hoar. This avalanche problem may be lurking in the upper elevations above 2500’, where the total snowpack is closer to 6’. The likelihood of triggering this type of avalanche is low, but the consequence could be destructive. The places where triggering a deeper layer will be in shallow areas of the snowpack near rocks or very scoured areas. This is one more reason to keep your slope angles in check and avoid being on or under large slopes. Click HERE for an excellent write up from CAIC center published yesterday that describes more about the risks of Deep Slab avalanches.

Expect cornices to be sensitive and easy to break off. They also could trigger a slab avalanche below. Be extra cautious near ridgelines today where cornices can be challenging to navigate.  If you suspect a corniced ridge give these a wide berth and be aware of people below you. 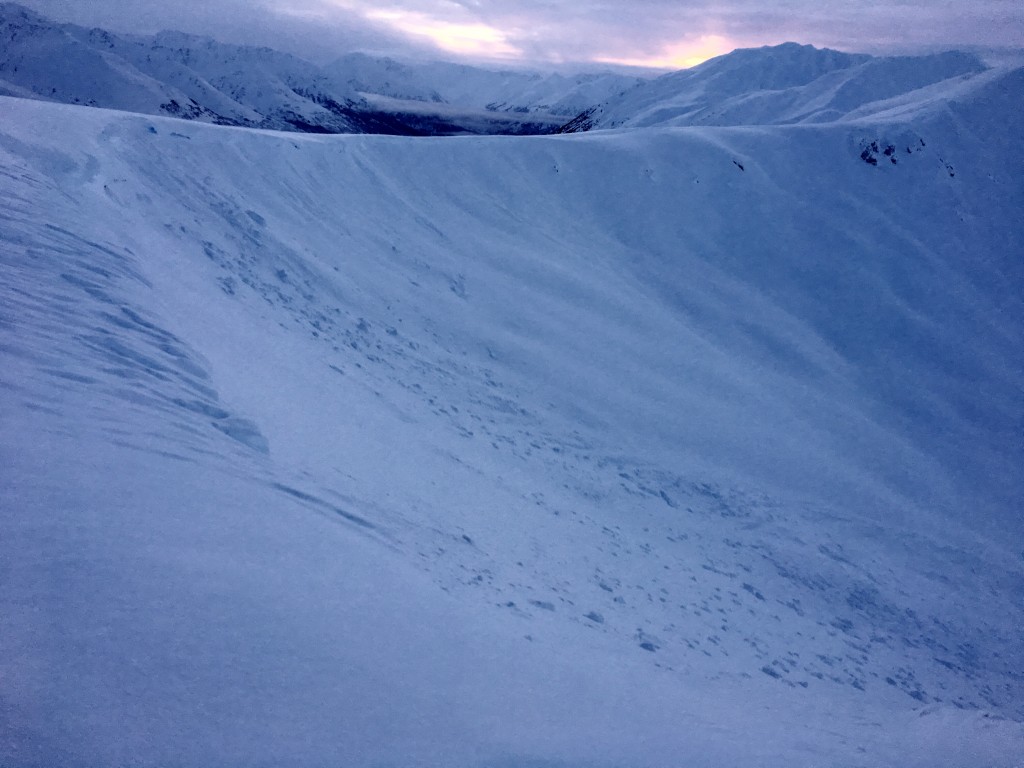 Yesterday visibility was in/out for portions of the day with light snow flurries. Less than an inch of snow was recorded. Temperatures dropped into the low to mid 20F’s and winds were light from North.

Today expect this pattern to continue along with light snow showers. Not much accumulation is expected. Temperatures should dip into the teens F. Ridgetop winds are expected to be light from the Northwest, but may increase this evening, 10-25mph from the Northwest.

A high pressure system appears to be moving into our region by the end of the week bringing clear skies and cold temperatures.

*** Sunburst Wx station is temporarily down and will be fixed upon safe access for a repair. Rime was cleaned off of the  Seattle Ridge anenometer  yesterday afternoon, and wind data from 1pm to 11pm was available.