Standard route to 2800′. Experience localized ‘wumpfing’ below 2000′ near alders in areas off of the established ski track. Several skier triggered avalanches occurred the day before in this same elevation band. We dug a pit in the alpine at 2700′ on a SW aspect and found a reactive layer of buried surface hoar below a 2.5′ slab. Multiple weak layer were found deeper in this pit, but did not propagate in tests.

Localized collapsing near alders between 1800' -2000'
Saw evidence of recent natural and human triggered avalanches from Dec.26

Dug numerous hand pits, ~2' deep, all collapsed easily or upon isolation on Dec.24th buried surface hoar. One hand pit in the trees collapsed on Fist hard facets. These facets were were slightly moist. See photo.

Pit at 2700', SW aspect, 27degree slope, HS=210cm - Tests in this pit propagated with moderate to hard force on the Dec.24 buried surface hoar layer buried 2.5' (71cm) below the surface. This buried surface hoar was covered in rime and was still standing up in pit wall. We performed a propagation saw test in this layer and the BSH fractured after 33cm. Both of these results were concerning because it may take some force to get the weak layer to fail, but wide propagation is a potential. Test results: CT17, ECTP18, ECTP19, PST 35/100 End.

We also found the Dec.15 layer of buried surface hoar in this pit 35" (90cm) below the surface. This layer failed with 22 taps in a compression test, but did not show propagation potential. We also found 1-1.5mm facets on top of a stout pencil hard crust 4.5' (140cm) below the surface. The crust was at least 5" thick, likely much thicker. With strong force in shovel sheer a clean bed surface was found with a thin layer of facets on top. We did not dig to the ground. From the ground up the pit had a right-side up density starting with Pencil hard at crust and Fist hard at surface. 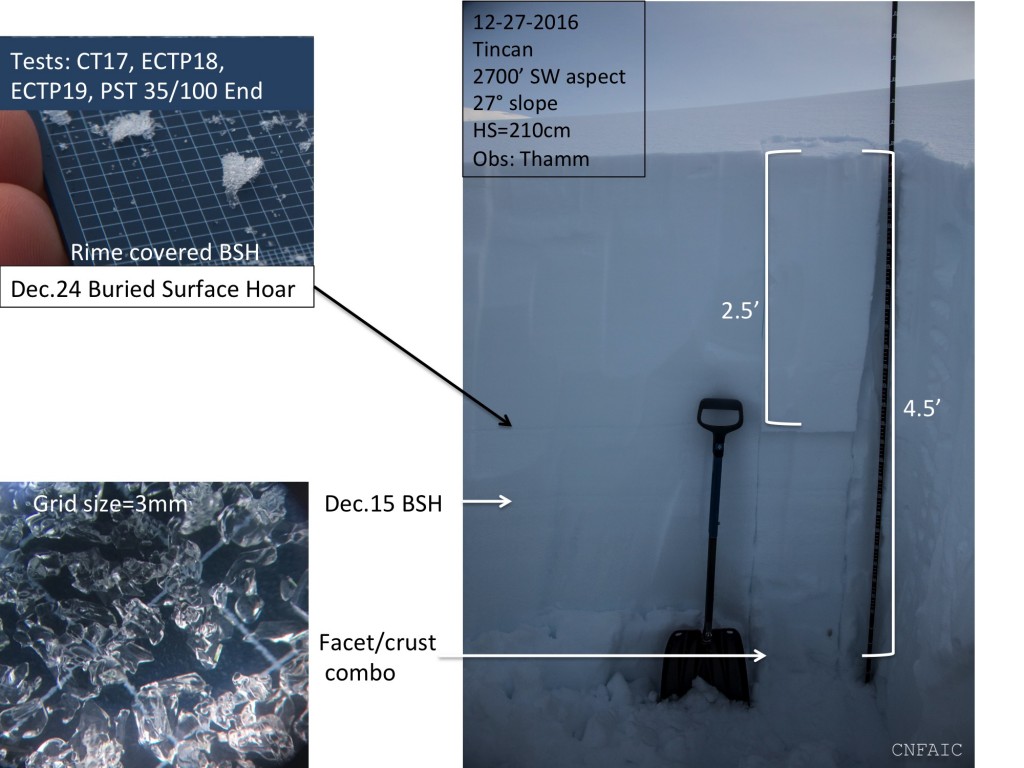 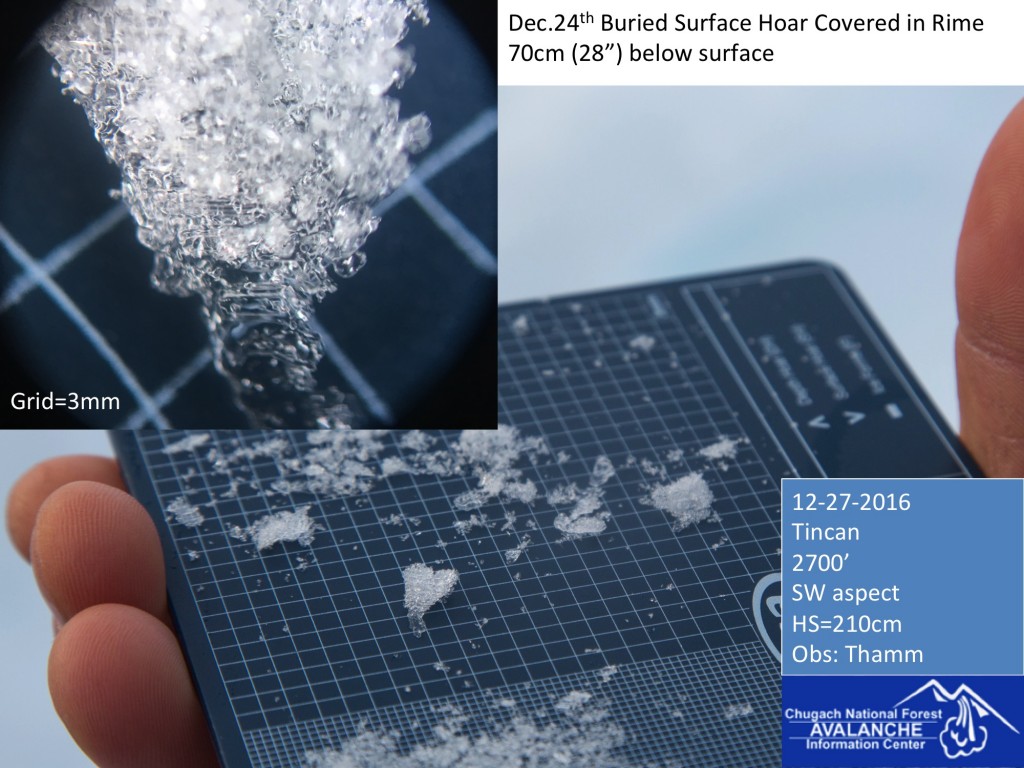 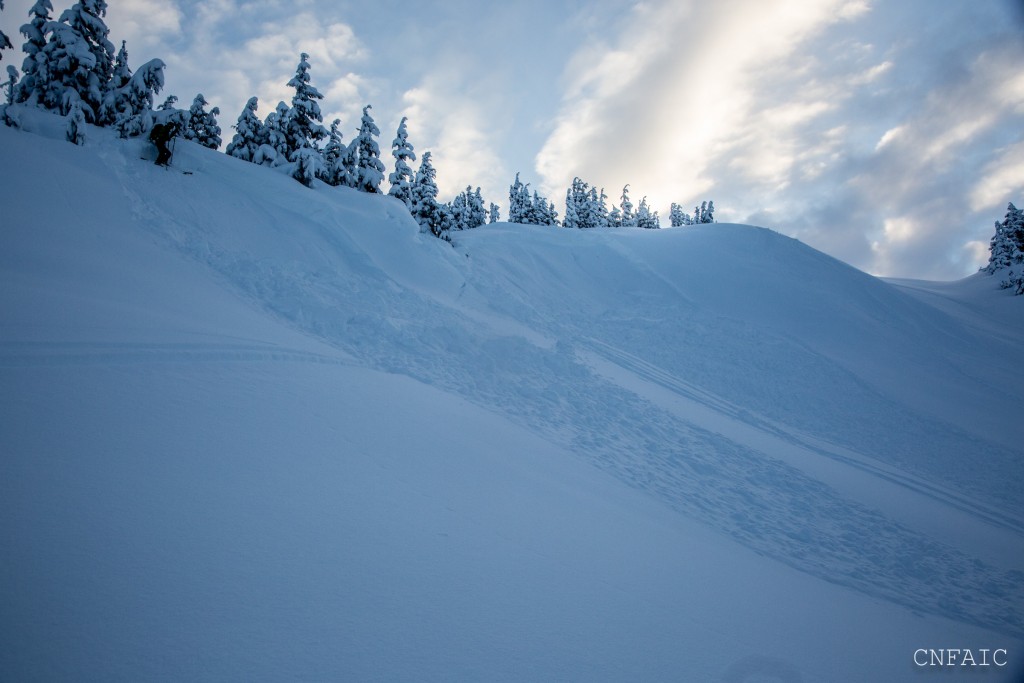 Two remotely triggered avalanches that occurred on Dec.26th at 2100' on Tincan WNW aspect 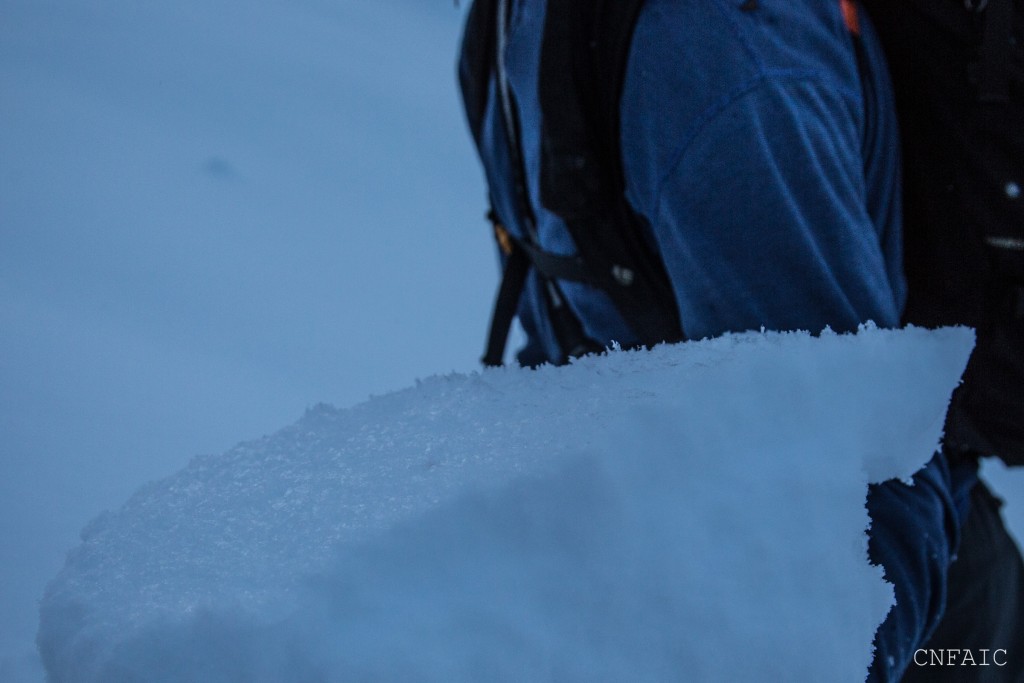 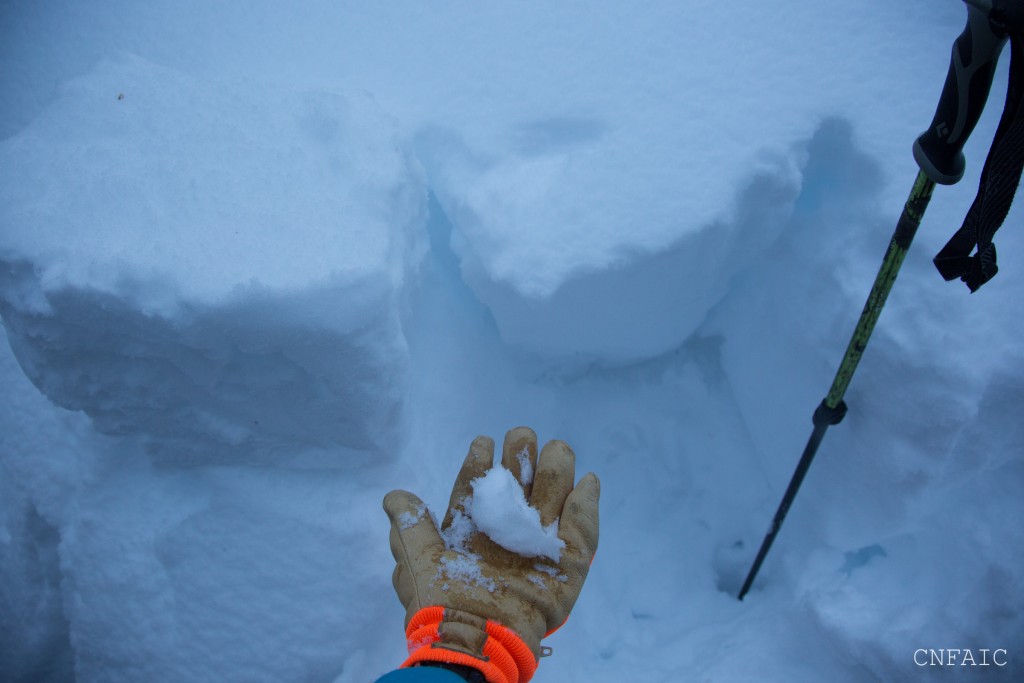 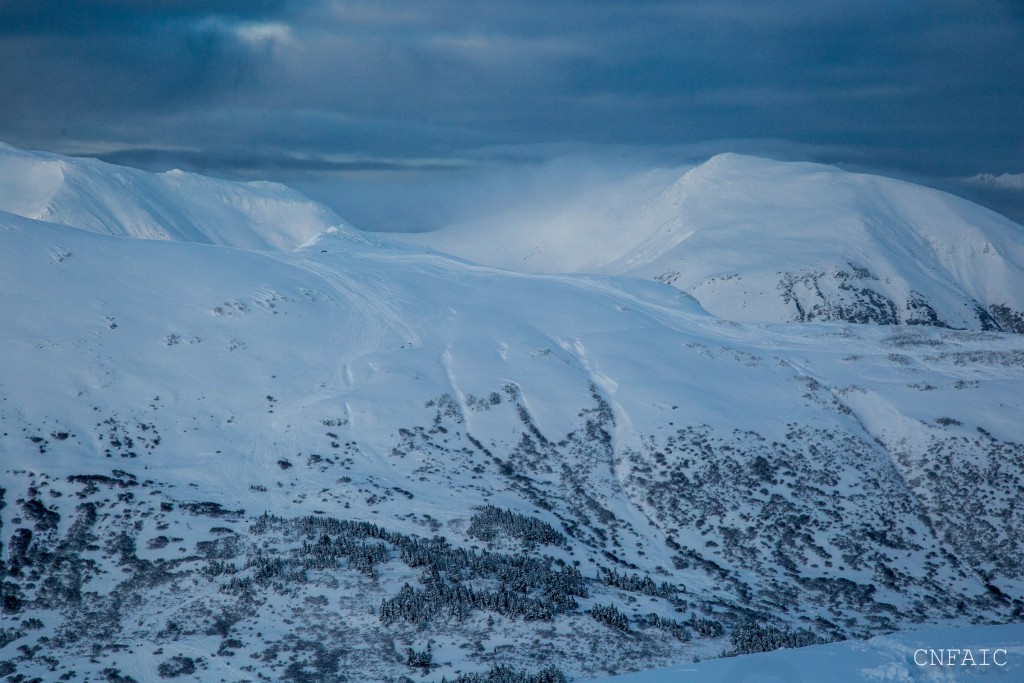 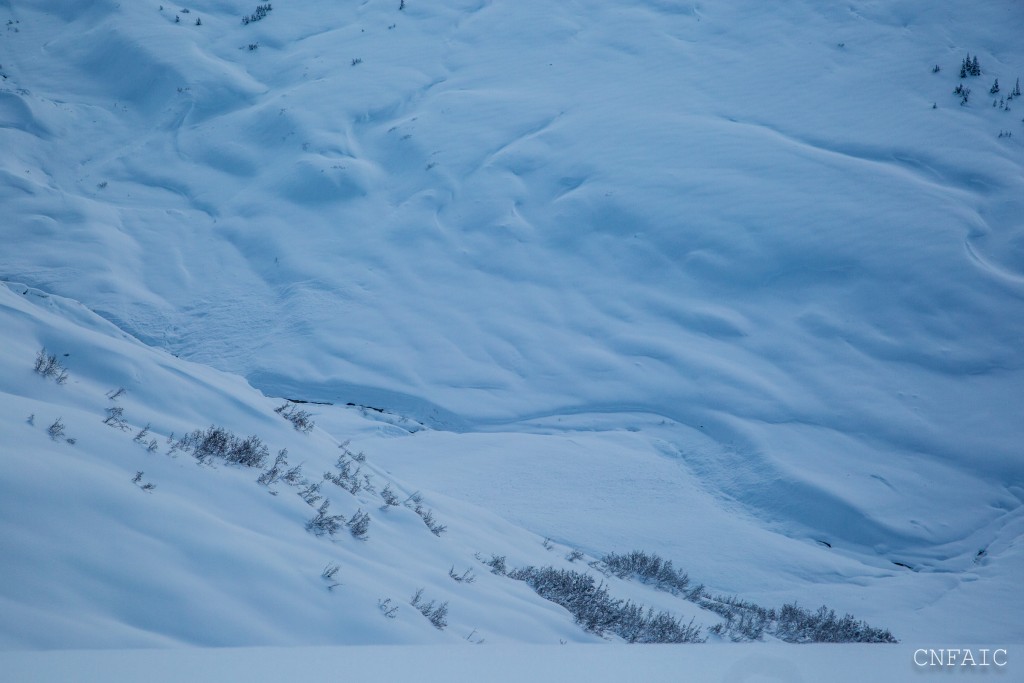 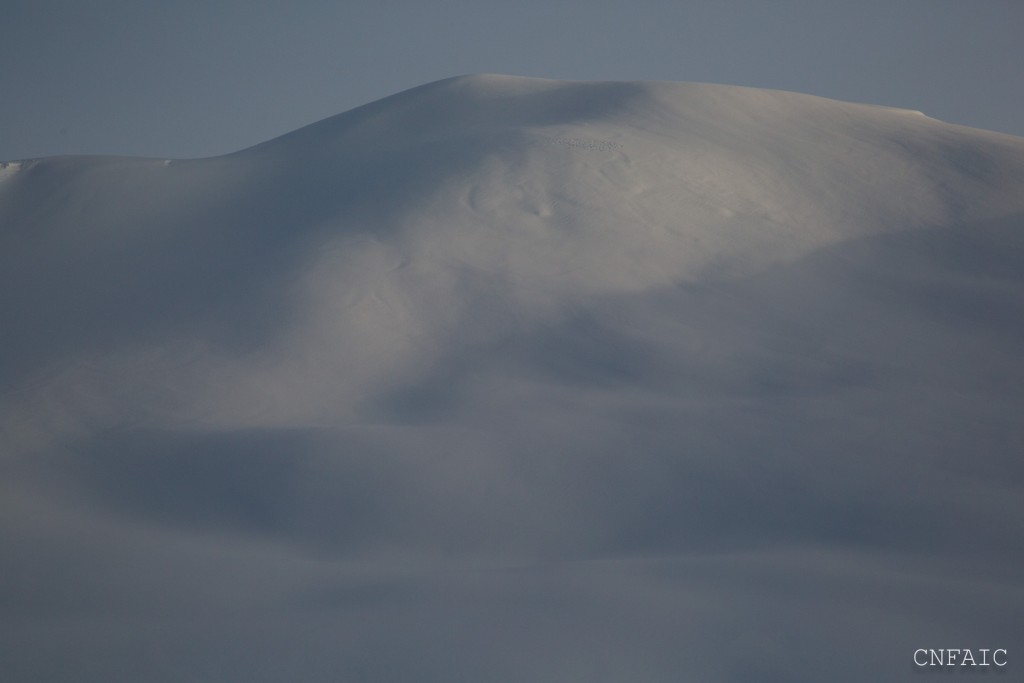 We could almost make out the depression of old tracks on the steep convexity of Tincan Common. 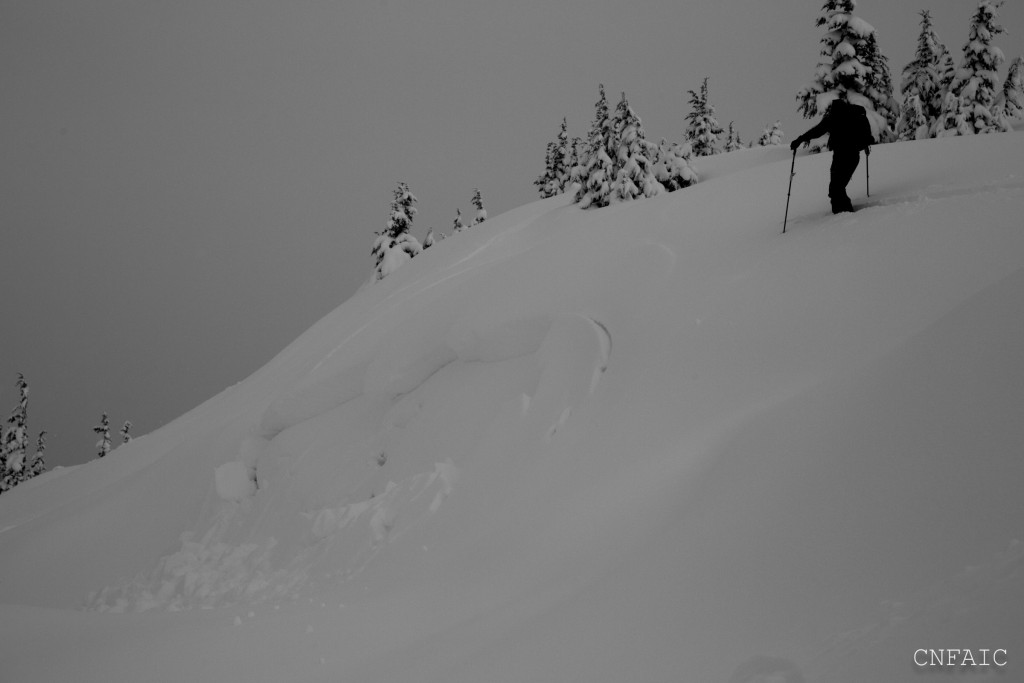 Another small avalanche that happened on Dec.26th, on Tincan near skin track at around 2100' 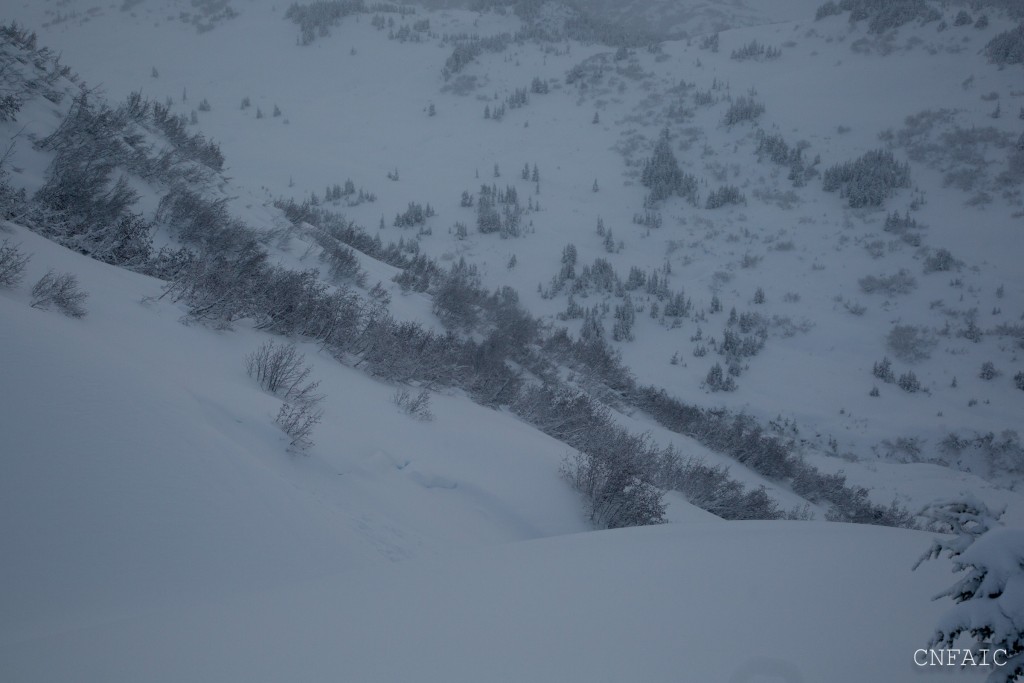 Old natural activity in the 'Snake Pit' in steep alders