The avalanche danger is CONSIDERABLE in the alpine and treeline elevations where triggering an avalanche 2-3′ thick is likely on slopes steeper than 35 degrees. An avalanche this size could be triggered remotely on adjacent slopes and has the potential to step down into a deeper layer of the snowpack. Avoid being on or under steep slopes and pay attention for other groups traveling near you. Cautious route-finding and conservative decision making are essential today.

A MODERATE avalanche danger exists below 1000′ where an avalanche from above in steep or channeled terrain could run. This will be extra important in areas like Portage Valley.

Turnagain Pass is now OPEN to motorized use . This opening happens to coincide with touchy avalanche conditions!  It is recommended to  AVOID AVALANCHE TERRAIN  until the snowpack has more time to adjust to it’s new load. There is plenty of fun riding to be had in the flats, away from avalanche terrain and runout zones.

The Seward Ranger District has opened a couple of new areas to riding as of this morning.  South Fork Snow River corridor and Summit Lake are now open to motorized use.  Lost Lake access via Primrose and Fireman’s still remain closed.

A three-day storm that ended yesterday morning dumped 2-3 feet of new snow on top of a very weak snowpack throughout Turnagain Pass. Numerous human triggered avalanches (both skier and snowmachine triggered) were observed yesterday directly following this rapid loading event. This also coincided with the first day of snowmachining at Turngain Pass. Most of these avalanches were small and proportionate to the smaller terrain folks were riding/skiing in. One exception was a larger avalanche on the NW shoulder of Sunburst that was likely triggered remotely from the skin track above.

AVOID BEING ON OR UNDER STEEP SLOPES! As the snowpack settles and the slab becomes more cohesive and supportable, there is increasing potential for more connected avalanches today. Weak faceted snow and buried surface hoar are widespread under the new snow and triggering a slab 2-3’ deep is plenty large enough to bury a person or multiple people. Areas like Repeat Offender are suspect and with busy holiday crowds anticipated, it will be difficult to practice safe travel habits like only exposing one person at a time.  We recommend giving the snowpack more time to heal-up before venturing near steep terrain.

Today it will be extra important to keep our natural human tendencies in check and avoid the lure of avalanche terrain. Just because someone has ridden/skied a steep slope does not deem it ‘safe.’  It is not out of the question for the 2nd, 3rd or 5th person to find just the right ‘trigger spot’ or even trigger a larger avalanche in a deeper layer layer of the snowpack. More on this in Secondary Concerns.

Do not ignore obvious signs like recent avalanches, ’whumpfing” sounds or shooting cracks. Remember that MOST AVALANCHE FATALITIES HAPPEN WHEN THE DANGER RATING IS CONSIDERABLE.

An avalanche that occured yesterday on the NW shoulder of Sunburst at about 2500′. This occured sometime after 11am and is suspected to be remotely triggered from the skin track that was put in on the ridge above. 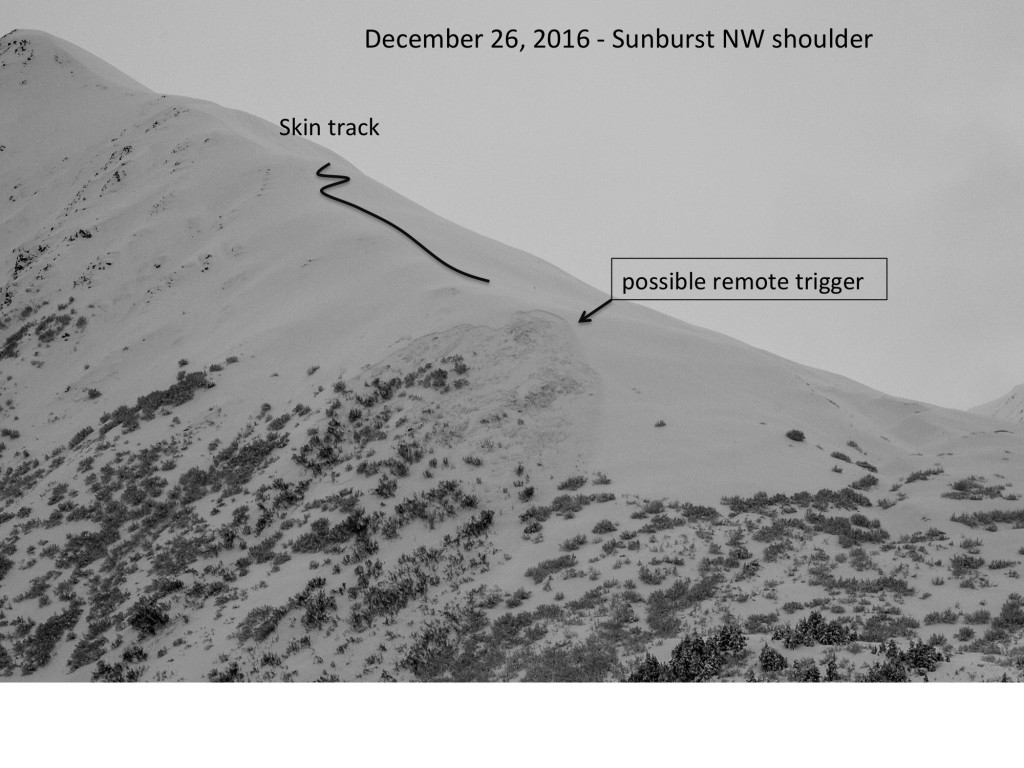 One of several 2′ slabs triggered yesterday in the Tincan trees below 2300′. Photo compliments of Tully LaBelle-Hamer 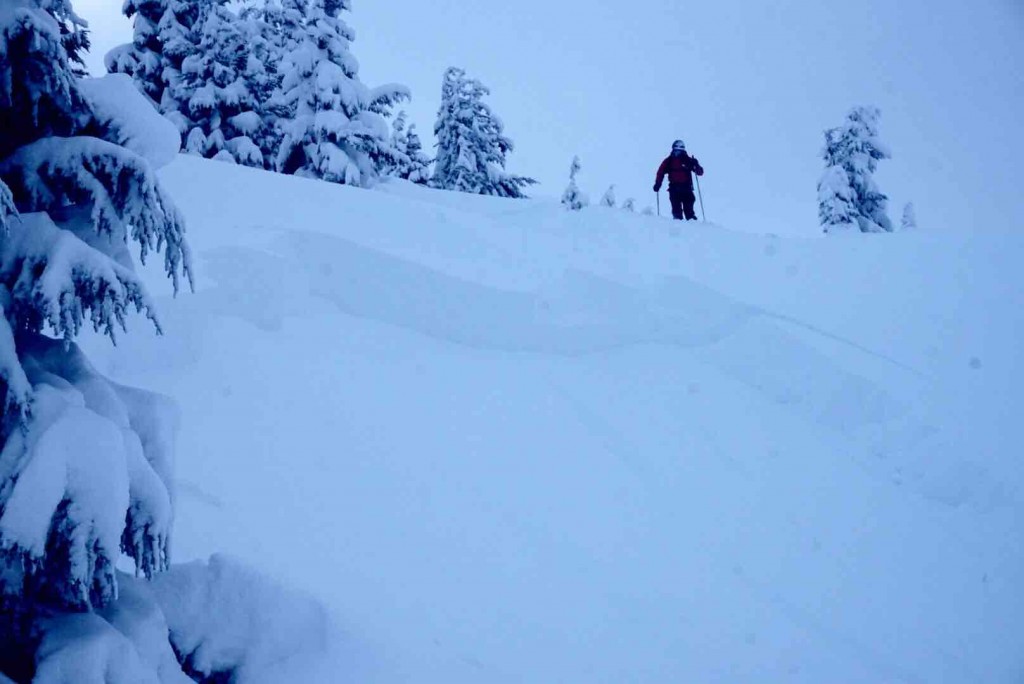 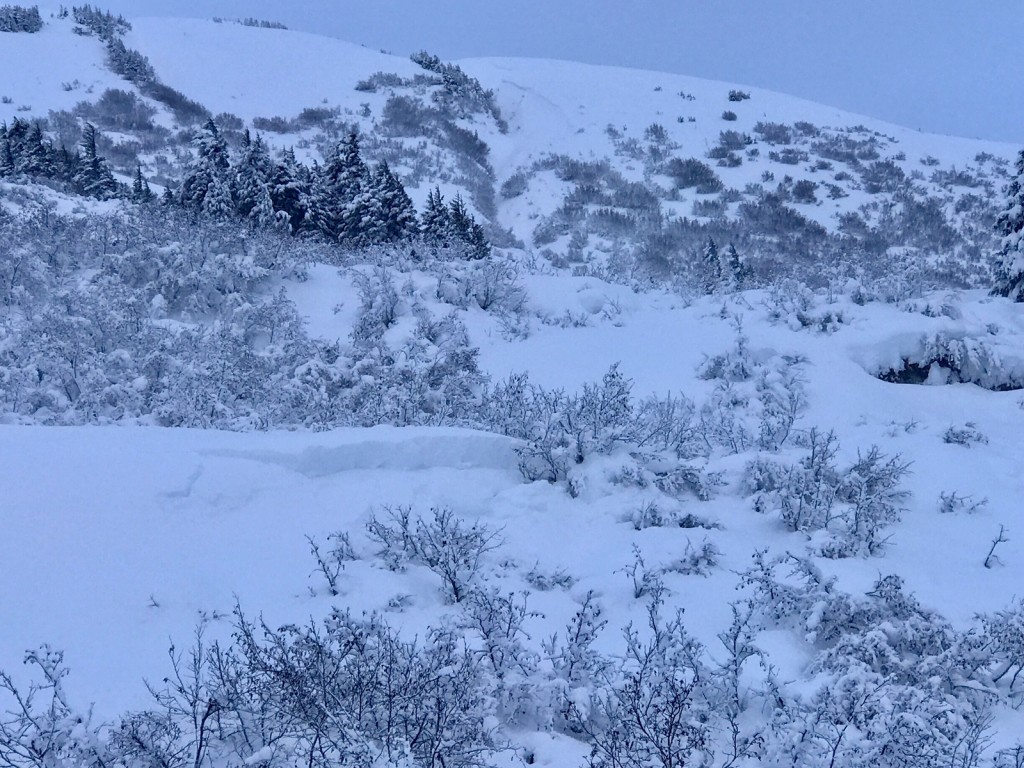 Our current snowpack structure is complex. Multiple weak layers exist within the entire snowpack including weak faceted snow and three separate layers of buried surface hoar. There is much uncertainty about the upper elevations where the total snowpack is closer to 6’ thick. It will be in this elevation band where trigging a deeper slab, 3’ or thicker will have very high consequences.

Three very distinct layers of buried surface hoar can be seen in this photo taken yesterday by Jesse Haffener and Sam Galoob. This observation was made yesterday in the Tincan trees, where the snowpack is more uniform. In the alpine where snow depths vary these layers have been reactive in many test pits over the last few weeks. 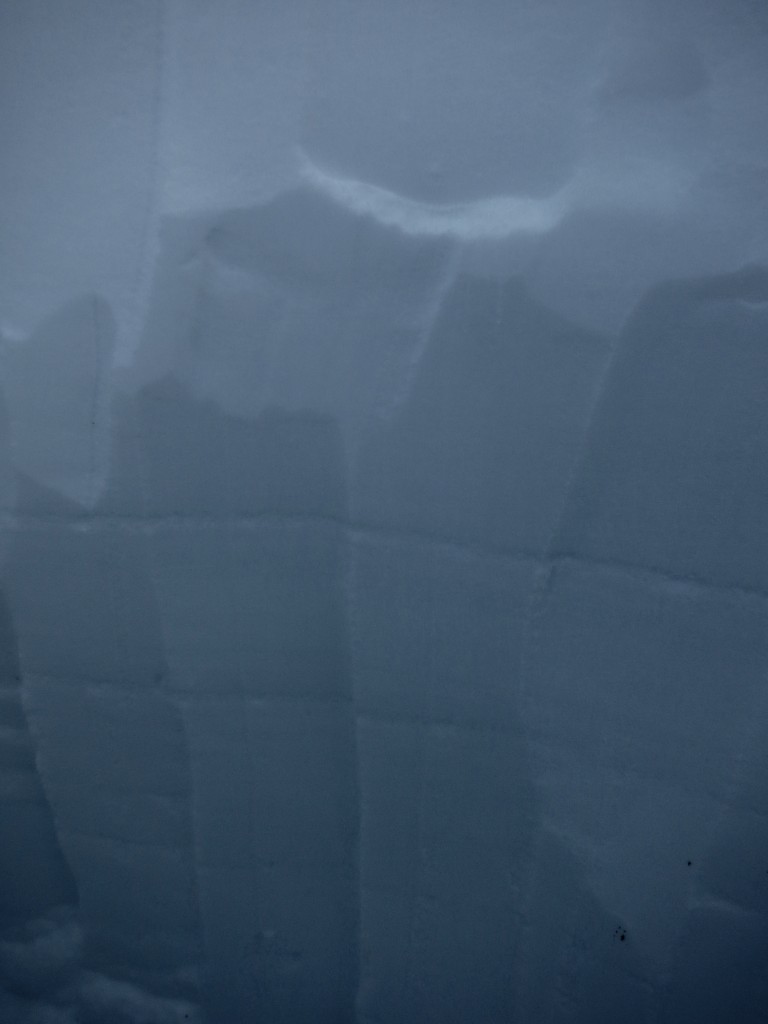 Expect cornices to be sensitive and easy to break off. They also could trigger a slab avalanche below. Be extra cautious near ridgelines today where cornices can be challenging to navigate.  If you suspect a corniced ridge give these a wide berth and be aware of people below you.

Yesterday morning a storm ended leaving 30″ of snow at Turnagain Pass over a three day period (2.8″ of snow water equivelent.) After 6am yesterday only brief snow flurries were observed, but visibility cleared and winds were light from the East. Temperatures remained around 32F at sea level and high 20F’s in the upper elevations.

Overnight temperatures dropped below freezing in the lower elvations. Winds were calm and only a trace of new precipitation was recorded.

Today expect temperature to remain the 20F’s with light Easterly ridgetop winds. Visibliity may be obscured at times with the possiblity of scattered snow showers. Not much accumulation is expected.

*** Sunburst Wx station is temporarily down and will be fixed upon safe access for a repair. Seattle Ridge anenometer is likely covered in rime and currently not working.