There is a HEIGHTENED  MODERATE avalanche danger at all elevations in the mountains around Turnagain Pass. Very sensitive wind slabs have formed over the past 24 hours due to 3-7″ of new snow and moderate winds. These slabs are shallow, around 4-10″ thick due to the low snow amounts, but are expected to be easy to trigger. With limited snowfall data, watch for thicker, more concerning winds slabs in areas receiving more snow/wind.

It will be very important to monitor how much new snow has fallen in the area you are traveling. This will determine how thick wind slabs will be.

AVALANCHE DANGER is expected to rise tomorrow as a powerful storm moves through.

*Ice climbers and hikers: The potential exists today, and more so tomorrow, for debris to run through gullies into terrain below 1000′ in the Portage Valley; due to an avalanche occurring above. More snow and wind exists in Portage than other areas.

What are you doing Tuesday night?? Come to the  Blue & Gold Boardshop for a CNFAIC presentation on the ‘Turnagain Pass snowpack’!! This will be an interesting discussion considering the interesting snowpack! Details on link.

Motorized use:  The Chugach National Forest is monitoring snow coverage across the Forest daily for a motorized opening. A 36 € base is a general number the Forest uses to determine adequate coverage – this could be more or less depending on snowpack density. Thanks for your patience and don’t let up your snow dance €¦.. The forecast looks promising!  With an opening on the horizon, have you got your rescue gear out, practiced?? Check out this successful rescue a couple days ago in Colorado.

We have had very little snow so far in our upcoming week of stormy weather, but the snowpack is already showing its cards. Two shallow wind slabs were triggered yesterday by skiers/riders on Tincan and Eddies. These slabs were only 4-6″ thick, but are so touchy because they are sitting on VERY weak faceted snow. With another 2″ of new snow overnight and continued winds, we can expect today’s wind slabs to be a bit thicker – and just as touchy.

What to watch for today:

Remember safe travel protocol: expose one person at a time, have an escape route planned, group up in safe zones and be aware of groups around you.

Photo below from Adam Rothman showing the shallow wind slab on Tincan. This is a classic slope for wind slab avalanches. Keep in mind, it has likely reloaded and could be ready for another release. 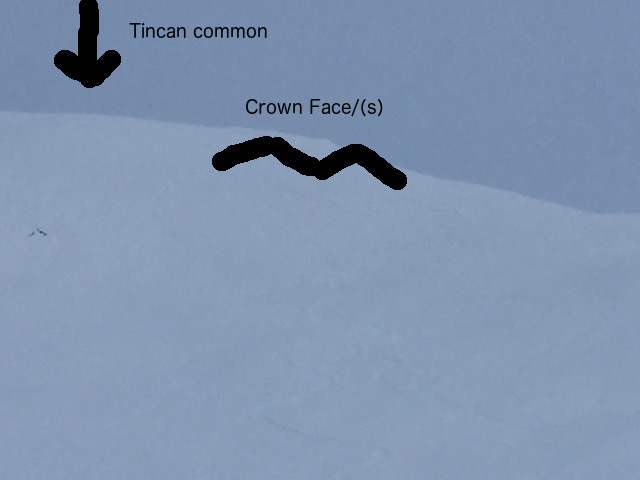 So what about this snowpack???

What Jim is talking about is the snow surface from our two-week cold and dry spell, shown in the video below. Faceted snow is notorious for causing avalanches once it is buried – this is the EXACT set-up we have now. With only 3-7″ of new snow causing low volume avalanches now, this is a pre-cursor to what is to come with additional snow in the forecast for tomorrow.

Yesterday saw mostly cloudy skies with a few snow flurries. Ridgetop winds bumped up and averaged in the 20-25mph range with gusts to 51mph from a Southerly direction. Temperatures warmed to 36F at sea level (ugh….), to the upper 20’s at 1,000′ and low 20’sF on the ridgetops.

Overnight around 2″ of moist snow fell above 300′ with light rain/drizzle falling at sea level. The rain/snow line looks to be around 200-300′. Snow amounts overnight for Portage Valley and the higher elevations could be in the 4-6″ range.  Today we should see cloudy skies and intermittent snow showers. Snowfall amounts during the day are expected to be anywhere from 0-2 inches. Ridgetop winds will be 5-10mph from a Southerly direction. Temperatures are expected to remain warm with a rain/snow line right around sea level.

The BIG news is how tomorrow’s storm is going to shape up. We are expecting winds in the 50-60mph range and snowfall in the 6″ to 1 foot range. Stay tuned on tomorrow’s advisory!!