LOW avalanche danger remains in the mountains around Turnagain Pass. Although triggering an avalanche is unlikely, there remains the possibility for kicking off a small wind slab or cornice as well as a larger avalanche, the latter would be an outlier. The most likely place to find one these will be in the terrain further away from the road corridor as well as the  ‘periphery’ zones, such as Girdwood Valley. This is mainly due to limited information about the snowpack in these areas.

UPDATED information from the Girdwood Valley:  We just received a report describing the potential for larger wind slabs (which may be sitting on facets) to be triggered.

*Good travel habits should not be left at home during ‘green light’ conditions; expose one person at a time, watch your partners, have an escape route planned and group up in safe zones.

We are sad to report the first two U.S. avalanche fatalities for the season  occurred over the weekend. The first was at Mt. Rose in Nevada and second near Cook City in Montana. Our thoughts go out to all those involved.

In light of the above, and the potential for a stormy weekend ahead, consider becoming more familiar with your avalanche education opportunities. These can be found on the calendar tab above.  The next event will be Thursday evening in Girdwood – Heather Thamm will be presenting a  Fireside Chat: Avalanche Awareness and Rescue  course. These awareness courses are FREE. If you are interested in paid professional avalanche education, the Friends of the CNFAIC is offering two $500 scholarships through the Rob Hammel fund. One is for avalanche professionals and the other is open to anyone. The deadline is Dec 15th. For more information click this link  HERE.

With clear, cold and calm conditions dominating the weather, the snowpack continues to age, dry out and become looser and less consolidated by the day. The avalanche danger is low now, but what is happening is we are forming a weak foundation for the next onslaught of snow. “The next big storm….”? That’s the question most of us are interested in! Maybe this weekend, or early next week. Check out the ‘long term’ forecast in the NWS weather discussion for the most up-to-date information.

Back to avalanches:  If you venture to the exposed steeps, you set yourself up for finding a small wind slab, breaking off a cornice, or actually teasing out a larger avalanche that fails mid-pack due to the Nov 16 buried surface hoar. There are slopes out there as well that harbor enough loose ‘sugar snow’ to warrant keeping an eye on your sluff.

Snowpack:  As mentioned above, the pack is becoming looser and faceting under the clear skies. Faceted snow has very few bonds with its neighboring snow grains and that’s why it feels sugary and making a snowball is impossible. It is a problem because it inhibits new snow from adhering to the slopes. Additionally, there is a new batch of surface hoar on the surface. Surface hoar does the same thing; makes it difficult for new snow to stick. Hence, mapping the surface conditions in anticipation of the next storm is important. 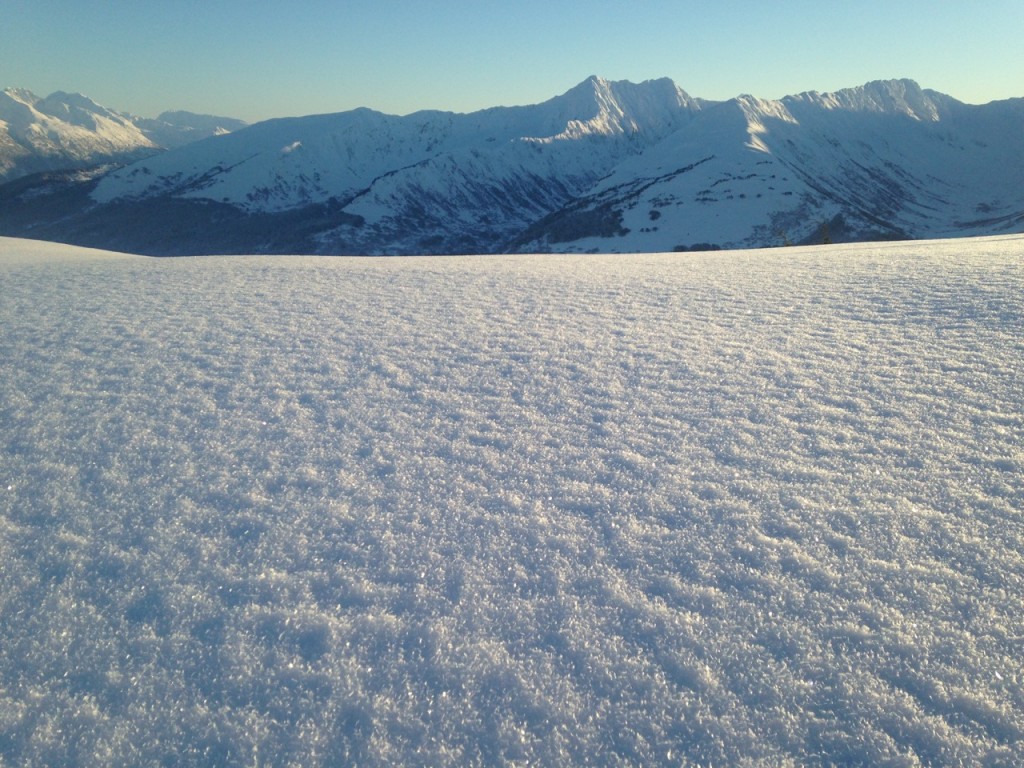 Yesterday was another clear day with a strong inversion. Temps in the valley bottoms were in the frosty single digits while at 3,800′ on Sunburst it was a balmy mid 20’s F. Winds were light and variable and completely dead at times.

Today, we have another clear, cold and calm day ahead, the only change from yesterday will be a chance for high clouds to move in this afternoon. Winds should be around 5mph from a Westerly direction. Temps -10 to +5F in parking lots and 20-25F on ridgelines.

The big news is “A shift in the Pattern will be well underway Wednesday night and Thursday….” This means the blocking high pressure over us will push East allowing storm systems to impact Southcentral once again. It’s too early to tell how much and how warm these systems will be, or if snow will fall to sea level along Turnagain Arm or not – stay tuned!!