There remains a MODERATE avalanche danger on all slopes near and above treeline. Triggering a slab avalanche 1-2+’ thick is still possible and the likelihood goes up as one travels to areas that have had less traffic this season.  This is due to a buried layer of surface hoar that remains reactive. Additionally, triggering a classic wind slab avalanche is also possible today on steep slopes that have recently been loaded by winds.

If you are headed to  Summit Lake take a look at Aleph’s weekly summary.

Interested in forecasting snow/weather conditions for your day in the backcountry, or your weekend trip? Join us this Tuesday for a mountain weather talk  at Ski AK in Anchorage – 6:30-8pm!!

Don’t let the low avalanche danger in the treeline elevation band lead you into thinking the snowpack is any more stable above the trees. The thing is today, travel and visibility will likely be good enough to allow folks to venture further into the backcountry. These ‘less traveled slopes’ are the most likely places to trigger an avalanche. There is a layer of buried surface hoar (from Nov 16) that sits roughly 1-2+ feet below the surface and it is still causing avalanches.

Two avalanches were triggered yesterday. Both were on the Northerly aspects of Cornbiscuit. One was a result of buried surface hoar and the other was a wind slab. No one was caught in either and the wind slab avalanche is discussed in the secondary concern below.

Check out this report from the group on Cornbiscuit that triggered the avalanche breaking on the buried surface hoar. I was also able to find the layer across the valley on the South face of Magnum Ridge. As we have been saying for weeks now, it’s a tricky situation since slopes that have avalanched are generally stable, but those that have not remain unstable. Telling between them is difficult as subsequent snow and wind have covered up the evidence. Managing your terrain and using safe travel protocol is key!

Wind slab avalanches remain a concern on all exposed slopes where winds have formed drifts and slabs. There is a lot of wind affected snow out there and many of the slabs found yesterday felt stubborn and hard to move. However, one party found a touchy slab on a steep North facing shoulder of Cornbiscuit that released on a ski cut. This is a good example of not letting your guard down even if you see no signs of instability. A big thanks to the party that wrote in and you can see their account HERE.

Photos below: Skier triggered wind slab on Cornbiscuit. This slab was in an exposed and shallow zone, bed surface was old melt-freeze crust near the ground with reported facets above. The slab looks to be two wind slabs stacked on each other. 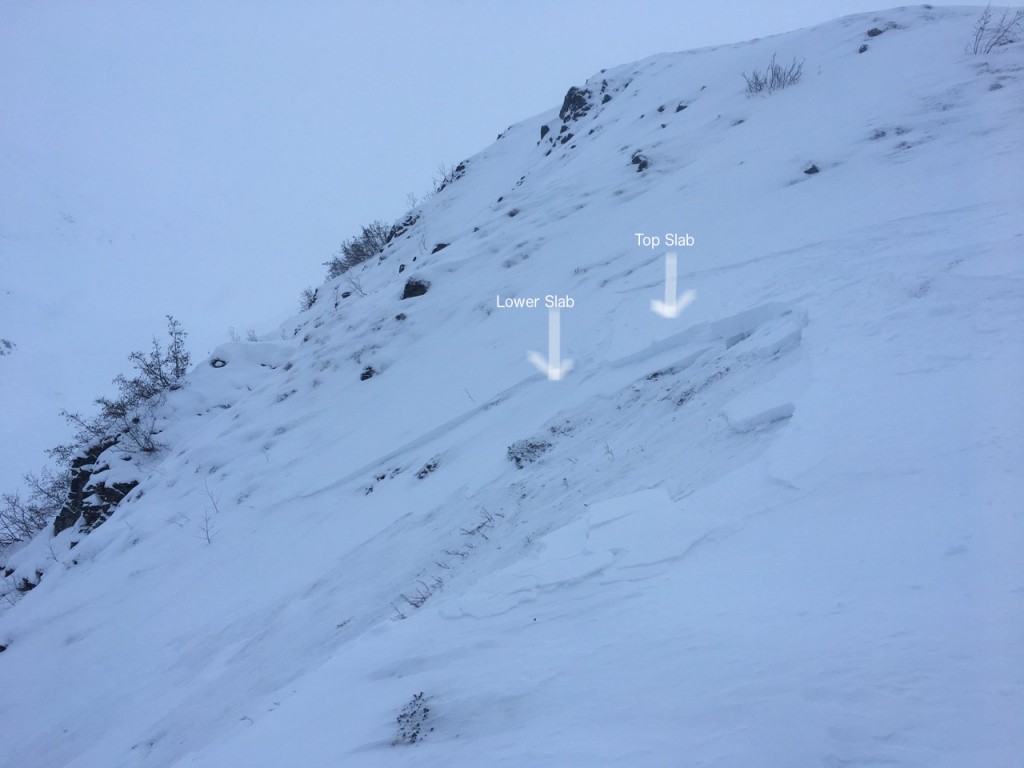 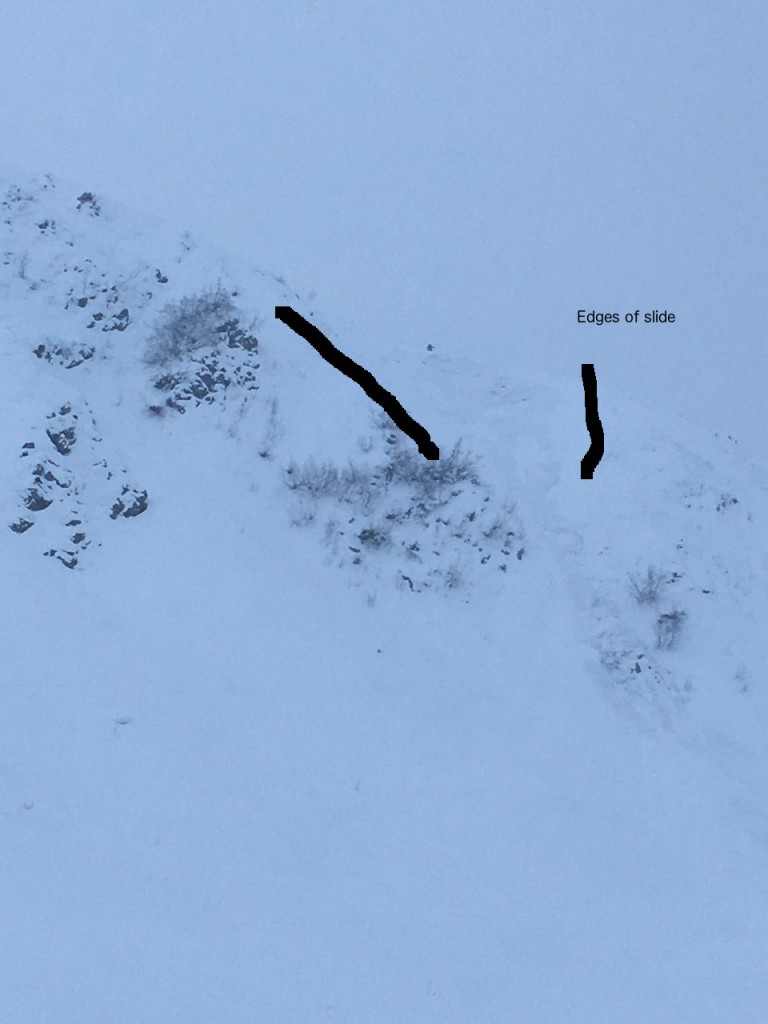 Yesterday’s weather saw cloudy and obscured skies with light snow falling later in the day; less than an inch of accumulation. Temps were cold, around 10F in the parking lot and 0F on the ridgelines. Winds were light to moderate out of the North, and South in some places, along the ridgelines.

Today will be another COLD and breezy day. Skies cleared a bit last night and temperatures dropped to the 0-5F range along road at Turnagain Pass with ridgetops remaining ~0F. Ridgetop winds will be mostly Northerly between 5-15mph, however this flow direction often produces Southerly winds in some areas. No precip is expected and skies should be clearing up today.

Monday looks to be another cold day with clouds moving in ahead of a cold low pressure system that should give us a few inches of snow to sea level. Stay tuned on this one!