There remains a CONSIDERABLE avalanche danger in the Turnagain Pass area on all aspects at elevations near and above treeline. Human triggered slab avalanches up to a foot in depth are LIKELY and it is possible they could release on slopes as low as 20-25 degrees. This problem is due to a widespread layer of buried surface hoar underneath last week’s snow.

At lower elevations, in the trees, a MODERATE danger exists where triggering a slab avalanche is possible in open areas or debris running into this zone from an avalanche above is possible.

***The Summit Lake area on the Kenai looks to have a similarly unstable snowpack. Weekly summaries will begin on December 2nd.

Get your mind back in the ‘avalanche game’ by swinging by Blue and Gold Boardshop Tuesday night (Nov 22nd from 7-8:30pm) for a CNFAIC Fireside chat!! Topic: current snowpack conditions at Turnagain Pass, rescue techniques and internet resources. Details HERE.

What a weekend to begin the forecast season here at the CNFAIC. During the last two days we have had over 10 human triggered avalanches. One of these was on a popular low angled slope (Manitoba) in the Summit Lake area. Luckily, from what we know of, no one has been injured in any of these slides. A lost ski and pole on Friday from an individual caught and carried in Tincan Common Bowl seems to be the worst of it so far. With this, we have had 10 public observations in the last two days describing the events and details – thank you for making time to send us your information !!

The problem with the snowpack is a layer of buried surface hoar that sits below new snow from last Thursday. Areas on the North side of the Pass (Tincan and Eddies) saw 10-12″, while the Southern side (Sunburst and over to Summit Lake) saw 5-8+”, hence this buried surface hoar is anywhere from 5-12″ below the surface and is the thickness of slabs folks are triggering. Slabs are soft and releasing while people are riding them as well as being triggered remotely from above or the side.

Two notable characteristics of this avalanche problem:
1-  Releasing on very low slope angles, angles in the 20’s (one was measured at 18 degrees!).
2-  Running much further than expected

If you are headed out today, be very wary of any slope near treeline or above treeline that has not avalanched. Keep slope angles low and be aware of crossing under slopes above you. If the light gets poor (new snow and wind are expected tonight), be aware of your return route – as not to get suckered somewhere you don’t want to go. Today is another day to be extra conservative – we have a long and hopefully snowy season ahead. 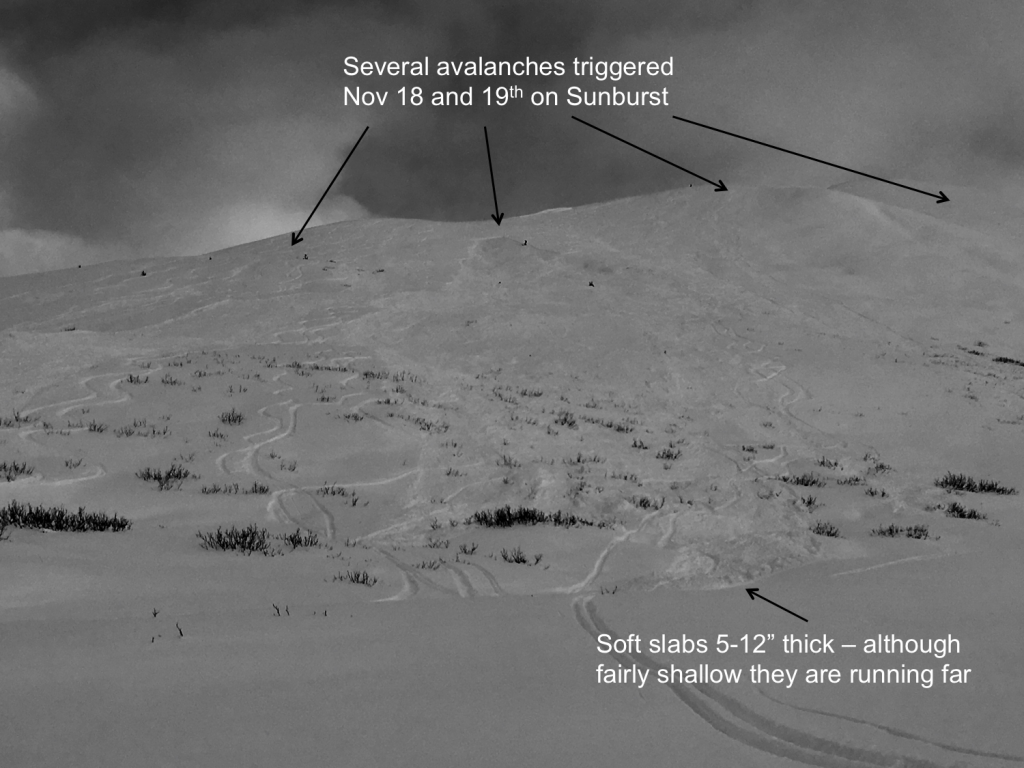 Photo below:  Human triggered avalanche just above treeline on Tincan. Note the debris that ran over the skin track. More on this report HERE. 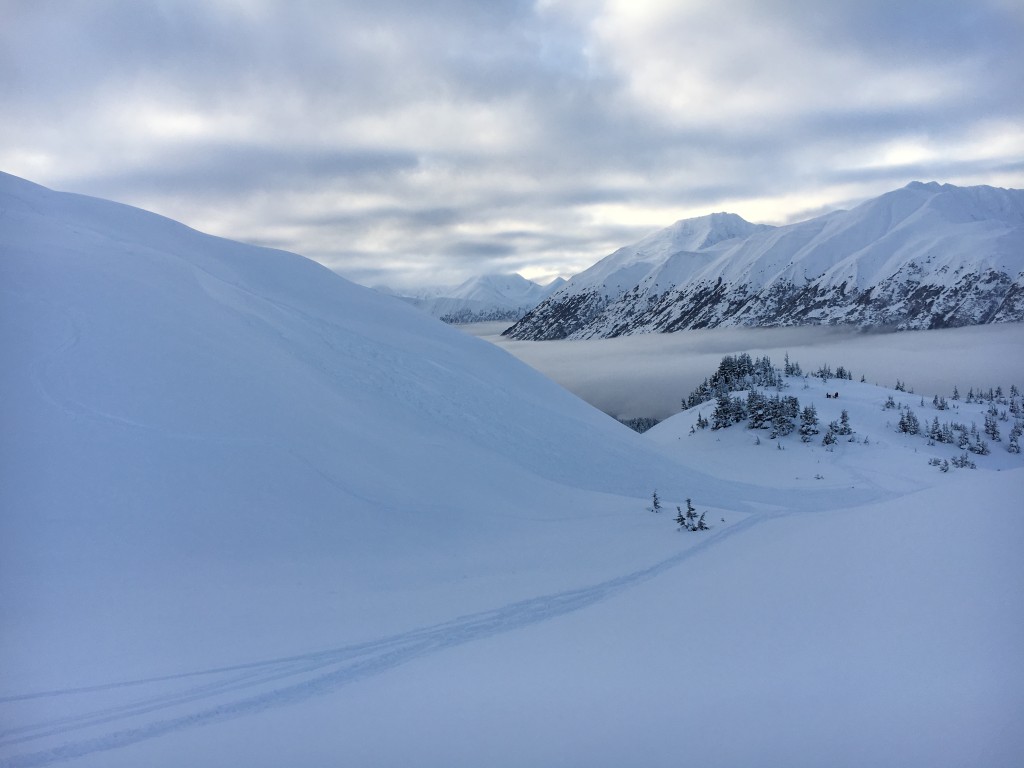 Again, thank you to the many people submitting observations – if you haven’t done so already, take a few minutes and check them out.

Partly cloudy skies yesterday gave way to some sunshine later in the day with valley fog up to 1,500′. There was no precipitation and temperatures were in the mid 20’s F. Winds were light and variable. Overnight, a trace to an inch of new snow fell at Turnagain Pass.

Today, Sunday, a short lived storm system will move in from the East. Skies are expected to become mostly cloudy by the end of the day with light snow beginning to fall. Ridgetop winds will be Easterly around 10mph and picking up tonight into the 25-35mph range. Overnight, we could see anywhere from 4-8″ of new snow. Temperatures will be in the 20’s F and it looks like snow should fall to sea level again – so cross your fingers!

On Monday, snowfall and wind are expected to tapper off by mid-day and temperatures cool slightly. It looks like we will have a break in weather Tuesday and into Wednesday with temperatures staying in the low 30’s at sea level and the mid 20’s in the mountains.