The avalanche hazard is CONSIDERABLE  in the Alpine (2500′ and above) due to recent wind effected storm snow sitting on a reactive layer of surface hoar. Human triggered avalanches are likely and natural avalanches are possible. Careful route-finding and conservative decision-making are essential. In the Treeline elevation band (1000′-2500′) a  MODERATE hazard exists in terrain where avalanches from the Alpine could be fast running from above and run into lower elevations.

No Rating  below Treeline (below 1000′) means there is currently not enough snow to produce an avalanche at this elevation band.  Remember Turnagain Pass is 1000′ at road level.

***We have no data yet for Summit Lake. Similar hazards may exist. Please send us your observations if you do do get out in that area. Summit Summaries will start next Saturday, December 2nd.

WHUMPF... There it is! Winter is here and so are the avalanches. Snow falling over the past two days landed on a widespread layer of surface hoar. Surface hoar is a persistent weak layer, meaning it can be sensitive to triggering for a long time after being buried. Multiple parties yesterday triggered 10-15″ soft slabs in the Alpine. These were easily triggered, fast moving and running long distances. One skier was caught and carried, losing a ski and a pole. Lower angle terrain (18-25 degree slopes) was avalanching which is common with buried surface hoar and requires extra caution. The storm snow was fairly soft but as the wind moved it around it became more of a slab throughout the day and more reactive. Slabs could be even more developed today with additional snow, wind loading and time to stiffen. If this happens these may be more stubborn to trigger but may break above you when you are out on the slab. There is enough snow to take a bad ride if you are knocked off your feet, slide into a terrain trap or get pushed into high consequence terrain. As the first weekend with new snow there will be more people out in concentrated areas.  Watch out for people around you and recognize that this surface hoar layer could be triggered remotely.  Look for cracking and whumpfing and make conservative terrain choices today. In addition, look for drifted snow, listen for hollow sounds and avoid cornices. Use safe travel techniques and wear your rescue gear and don’t let your early season stoke cause you to make dangerous chioces today. There is a long season ahead of us! 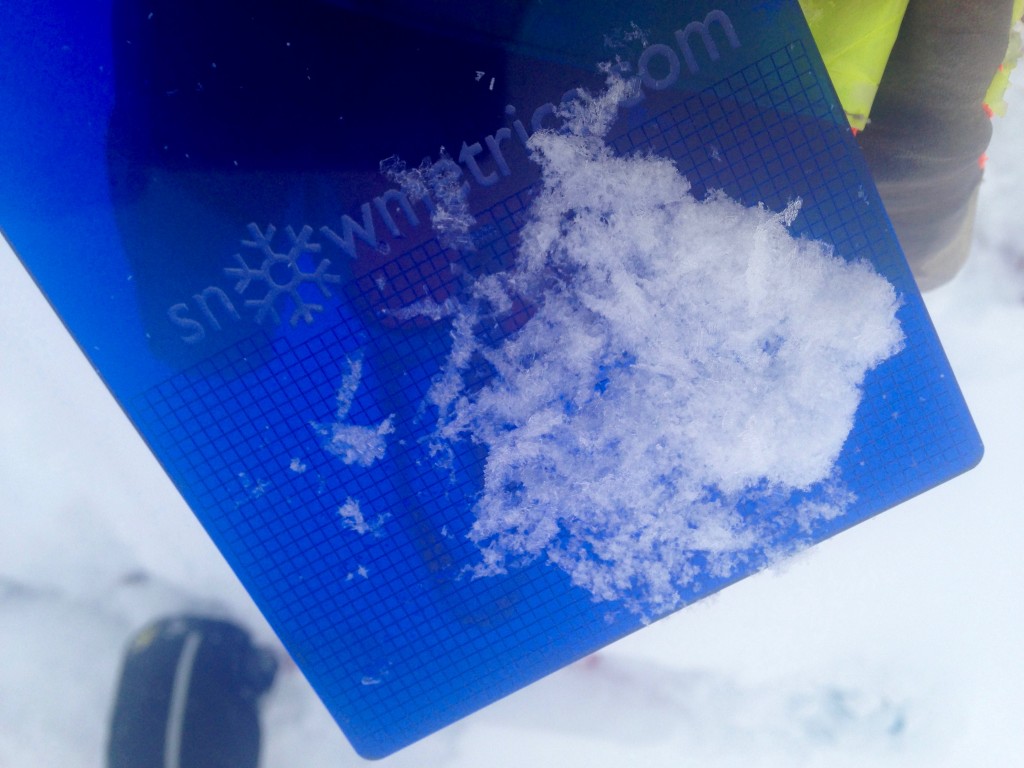 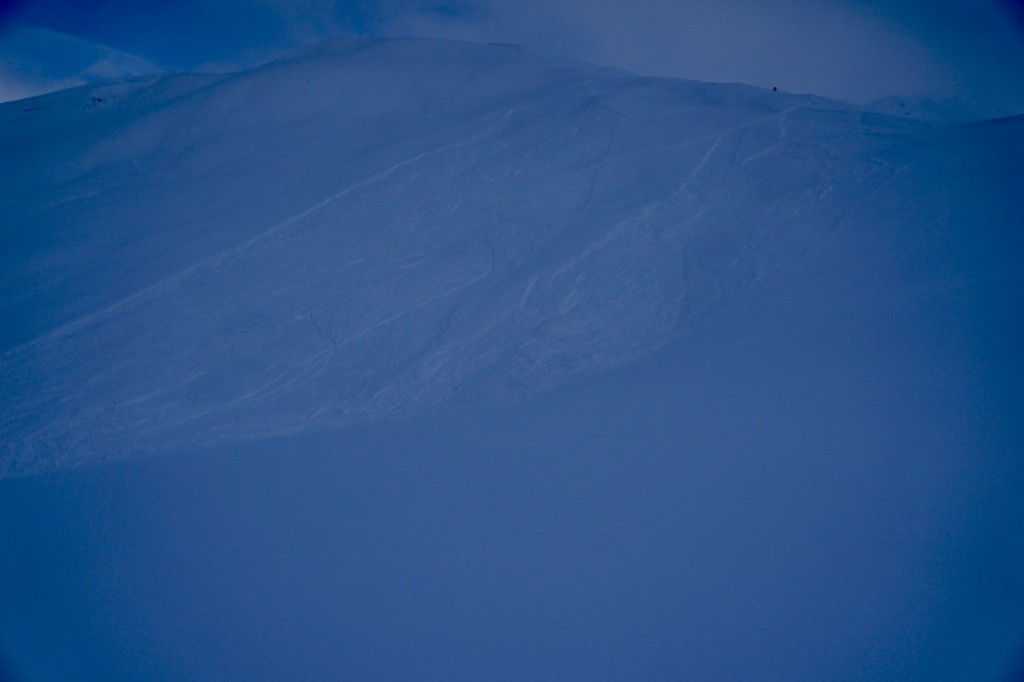 Recent glide avalanches and cracks were observed prior to the recent storm. These may have been covered up but look out for and avoid traveling under glide cracks if you see them. Glide occurs when the entire snowpack slowly slides as a unit on the ground. Glide avalanches can be composed of wet, moist, or almost entirely dry snow and pose a hazard that is very difficult to forecast. They are often preceded by glide cracks (full depth cracks in the snowpack), though the time between the appearance of a crack and an avalanche can vary between seconds and months. 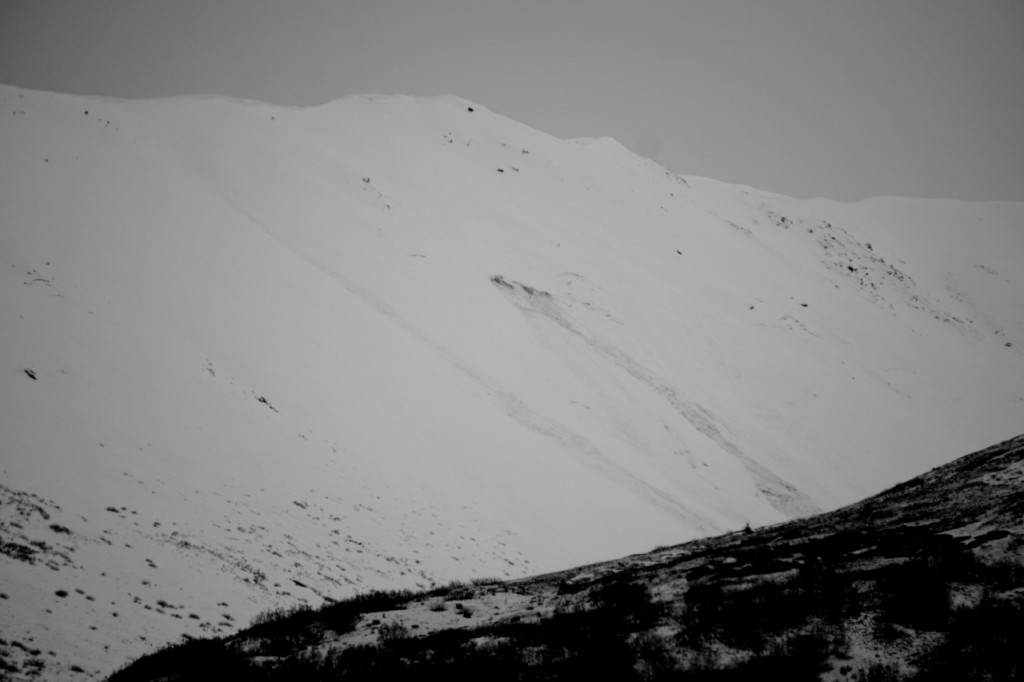 Moisture spinning into the forecast area from the Gulf continues to produce snow. Yesterday was overcast with snow showers throughout the day. Winds were from the NE 10-20 mph gusting into the 30s. Temperatures above 1000′ were in the 20Fs.

Today will be mostly cloudy with a 60% chance of snow. 1-5 inches of new snow is possible as moisture is pushed into the mountains.  NE winds will be light. Temperatures will be in the upper 20Fs. Snow showers continue overnight with temperatures around 18F.

Tomorrow will be similar with mostly cloudy skies,  snow showers, light winds and temperatures in the 20Fs. An active pattern is forecasted to continue into next week. Stay tuned for more details.