The    avalanche danger is  CONSIDERABLE  in the Turnagain Pass area on all aspects at elevations near and above treeline.  Human triggered slab avalanches over a foot deep are LIKELY and it is possible they could release on slopes as low angle as 20-25 degrees.  This problem is due to a widespread layer of buried surface hoar underneath recent snow. Additional snow and the wind last night may have made this set-up even more hazardous. Natural avalanches are possible. Cautious route-finding and conservative decision-making are essential.

At lower elevations, in the trees, a  MODERATE  danger exists where triggering a slab avalanche is possible in open areas or debris running into this zone from an avalanche above is possible.

***The Summit Lake area on the Kenai looks to have a similarly unstable snowpack. Weekly summaries will begin on December 2nd.

More human triggered avalanches occurred yesterday with reports coming in from both Tincan and Sunburst, including the slope below Taylor Pass sliding. The buried layer of surface hoar continues to be the problem layer. It sits below the new snow from Thursday and has a few additional inches added from the weekend. Slabs have been soft and releasing while people are riding them as well as being triggered remotely from above or the side. With all the snow available for transport and an increase in wind speeds last night the slabs could be even more developed today, stiffer and more hazardous. Slab depths near ridgelines and in leeward areas could be deeper.  Look for cracking in the snow, whumpfing and recent avalanche activity. Low angle slopes have been releasing which is a common with buried surface hoar. Pay attention to slope angle and what the terrain you traveling on is connected to, above and below. Avalanches were triggered onto and close to the skin track on Tincan both Saturday and Sunday.  Please think about where you put skin tracks in and when you are descending make sure you are not skiing or riding on top of other people.

The new snow and wind will also make it harder to tell what slopes have slid already and wind slabs may be sensitive and exacerbate the problem. Today is another day to be conservative.  Remember the buried surface hoar is widespread and is a persistent weak layer. This means it doesn’t heal/settle quickly and can be reactive for extended periods of time. 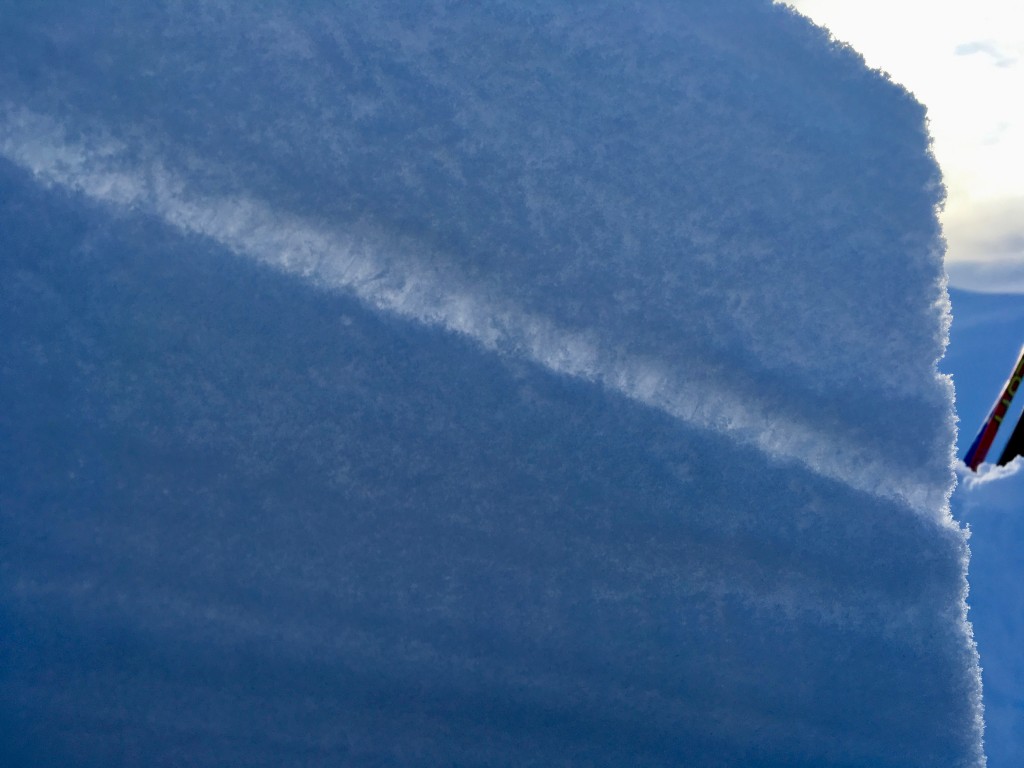 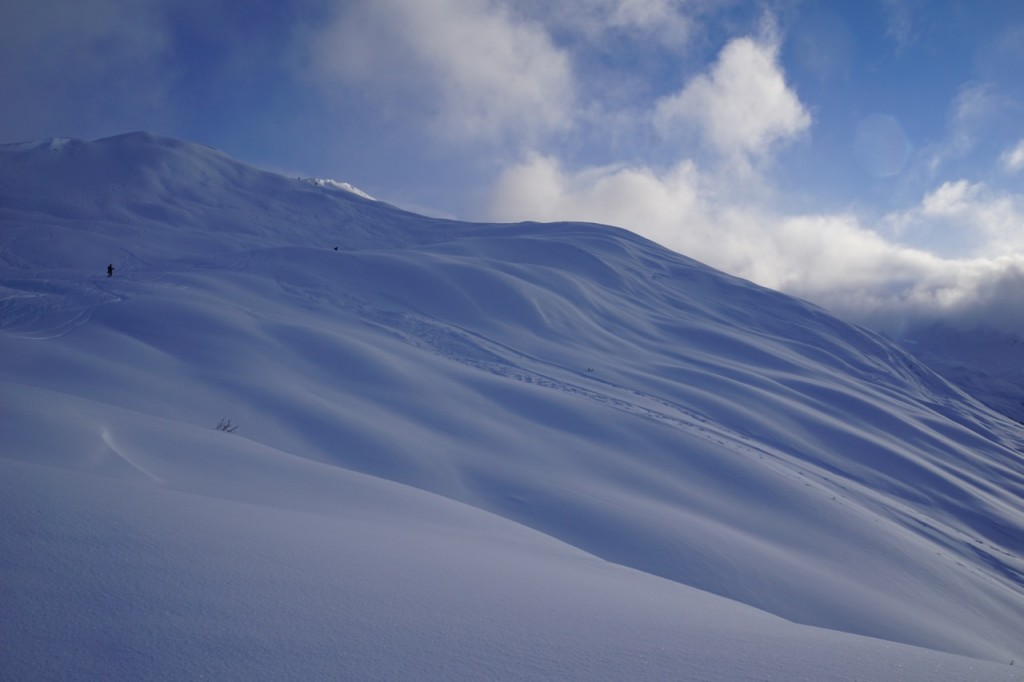 The winds have ramped over night gusting into the 40’s from the ENE. The light fluffy snow that we have enjoyed over the weekend will easily blow around and create fresh sensitive wind slabs that may or may not be sitting on the buried surface hoar. Wind slabs could be reactive either way and may make the slopes with surface hoar even more prone to avalanche.  It will be important to pay attention to how the snow feels underfoot. Is it stiff? Does it feel upside down i.e. hard over soft? Do you see shooting cracks? Does it feel or sound hollow? Look for recent cornices, wind pillows and drifts. Remember recent wind is a RED FLAG and means something has changed. This is another reason to be conservative today.  How are the mountains channeling the winds? Are slopes being wind loaded?  Can you tell if the slopes are top loaded or cross loaded? Has the wind blown and affected the snow in the trees?

Yesterday was mostly cloudy with snow showers and a few windows of clearing. The winds were light and temperatures were in the low 20Fs. Overnight the winds picked up from the ENE blowing in the 20s and gusting into the 40s. Temperatures rose to the high 20s. 2-5 inches of snow fell in the last 24 hrs.

Today will be mostly cloudy with a chance of snow showers tapering off in the afternoon. 0-2 inches of snow possible. Winds will be in the 20s and gusty. These should also taper off during the day. Temperatures will be in the high 20Fs.

There is a clearing trend Tuesday into Thanksgiving Day with sunshine forecasted, light winds and temperatures in the 20Fs. An unsettled pattern returns over the weekend with a chance of snow.